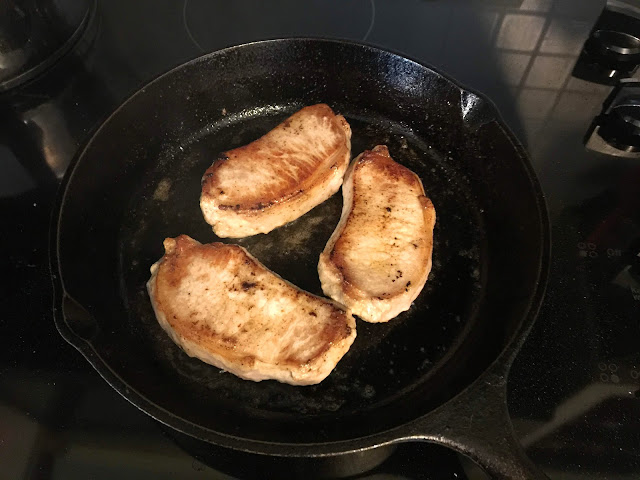 A weekly round up: eats, workouts, watches, and reads. Pork Chop and Power Buns Edition.
This week's highlights include: an awesome pork chop and gravy dinner, a smoothie, a revolutionary workout hairstyle, a Trader Joe's run, and some single girl time while the men went off to boy scout camp. 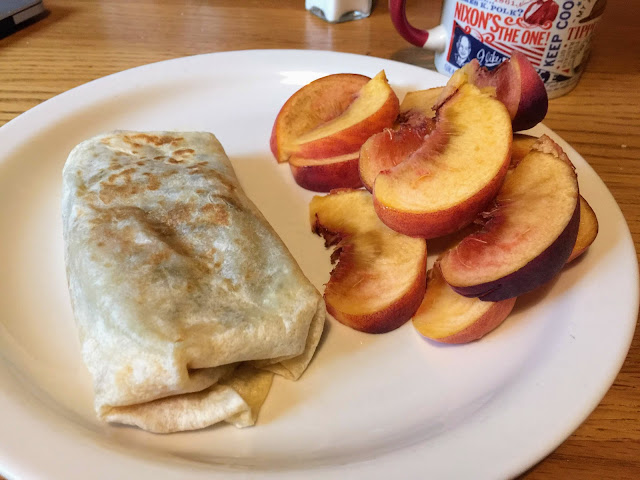 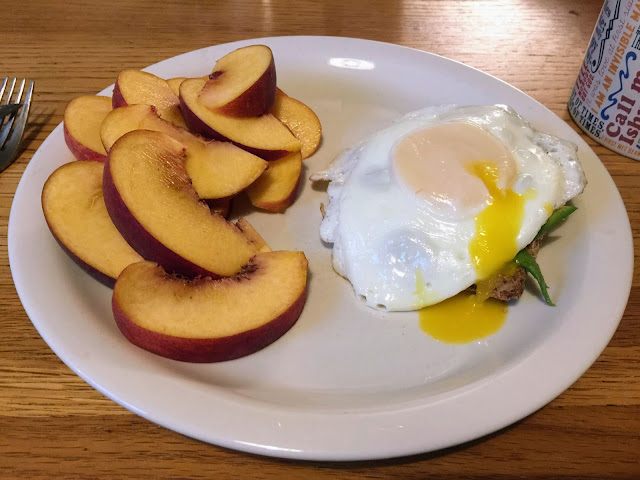 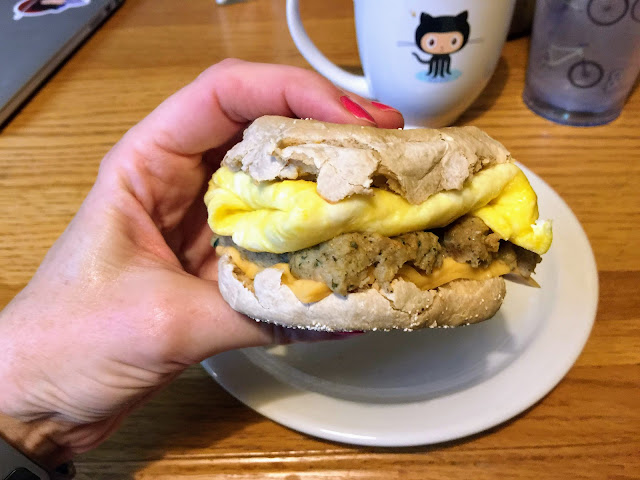 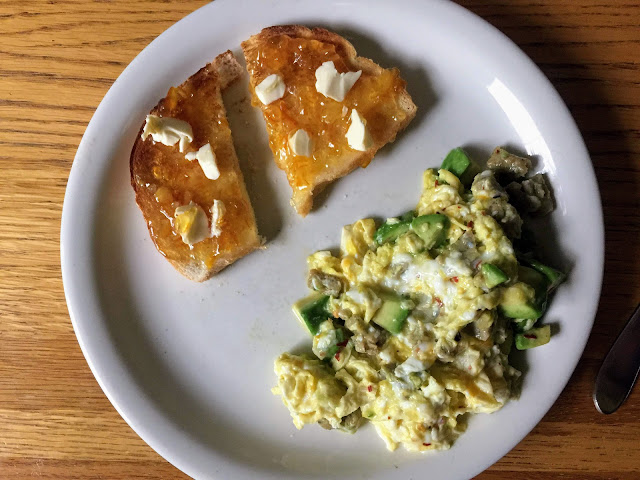 Weekday Lunches
BBQ shrimp and sweet potato bowls and let me tell you that they were epic.  There's a lot going on in that rainbow on my plate: grilled shrimp marinated in tequila, grilled sweet potato, grilled fresno peppers, purple cabbage, avocado, tomatoes, and cilantro lime rice.  That got me through four very happy days of lunches.  I grabbed a salad from our work lunches for the fifth day.  It's not going to be the last time that you see this. 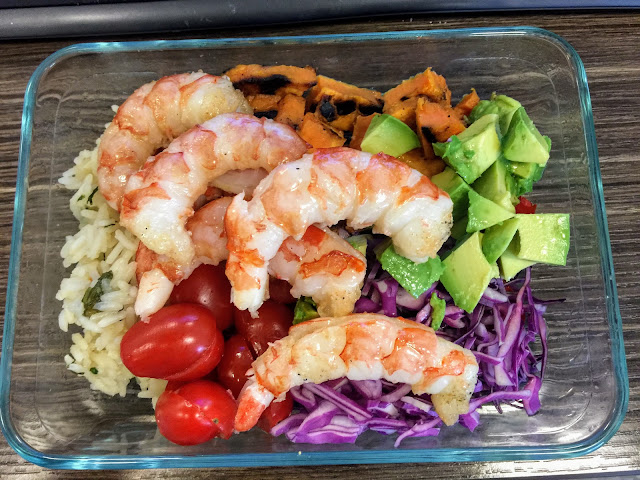 Weekend Lunches
On Saturday I went completely rouge with good results.  Never ever have you ever seen me drink a smoothie until now.  Whimsical September posted a Caffeinated Chocolate Protein Smoothie that piqued my curiosity.  Maybe it was because I've kind of been looking to get more protein, maybe it was because she gave love to the Ninja Blender, which is one of my most beloved kitchen tools, and most likely, it was because I didn't need to go to the grocery store to make it.  I didn't have the exact ingredients, but I had enough that were close.  Admittedly some of my substitutions were on the sketch side (didn't have almond milk so used silk - I was already over my caffeine limit for the day so used decaf - no chocolate protein powder used vanilla - didn't have fresh spinach used frozen). 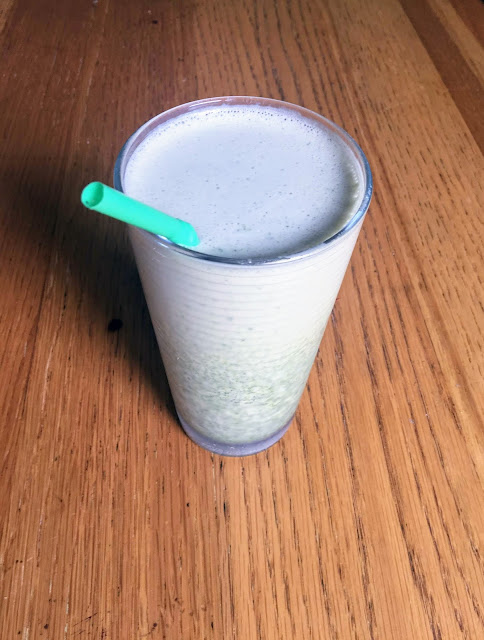 I whipped up half the recipe and...whoa, it made a ton and it was good!  The coffee flavor was very mild, and I could really taste the bit of banana and the cinnamon.  While you can see the spinach toward the bottom, you certainly can't taste it and I think it would be less obvious in a chocolate smoothie.  Any rate, I was very happy and I'm going to see how it works as a weekday breakfast.

On Sunday I slept in and the menfolk came back, so the line between breakfast and lunch was very blurry.  I put the last bit of my coffee into another smoothie.  Hubs made his famous egg in bread fry up and then coached stepson #1 through the process to make his own. 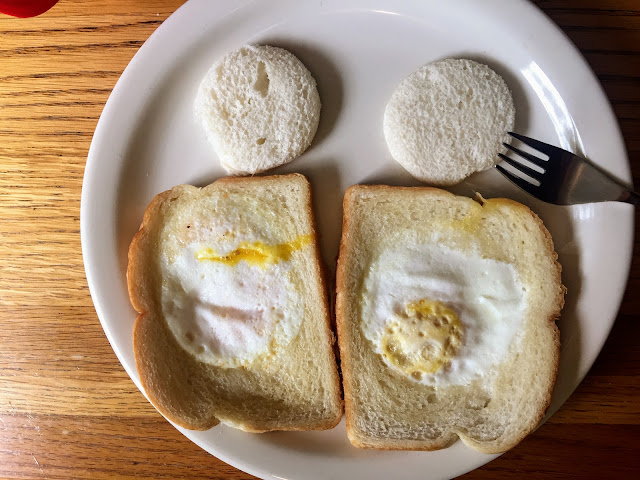 Weeknight Dinners
Monday (family meal): grilled chicken and cilantro lime rice.  I'd made the rice for my lunches so it was easy to build a meal around that. 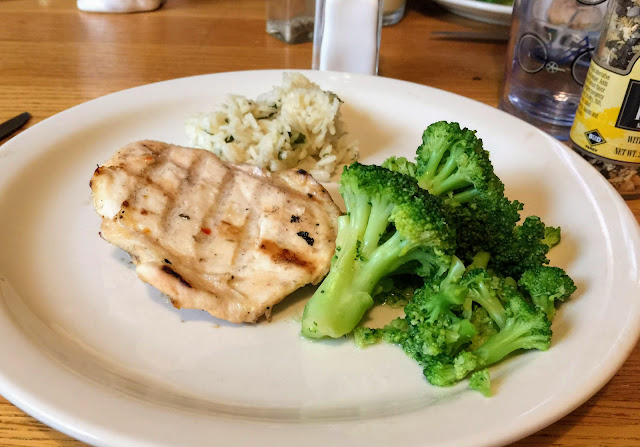 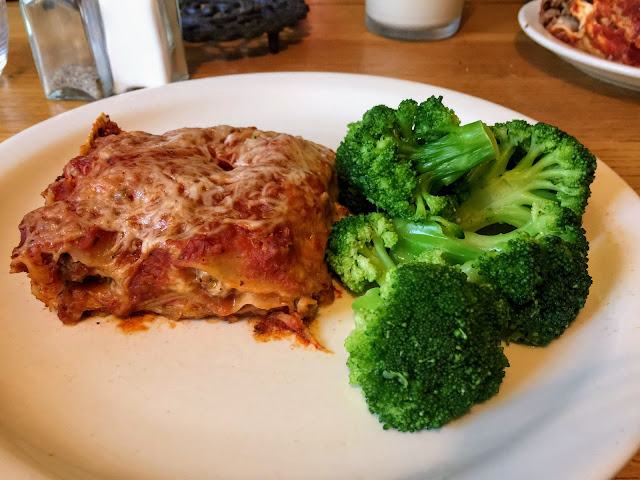 Wednesday (date night): pan seared pork chops with gravy.  Half recipe since there were only two of us.  That gravy tho...I can't do it justice, you just need to make it. 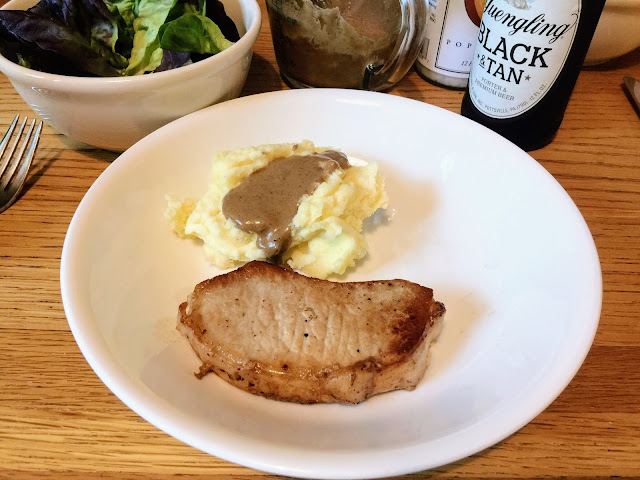 The last apple pie bars from the weekend for dessert. 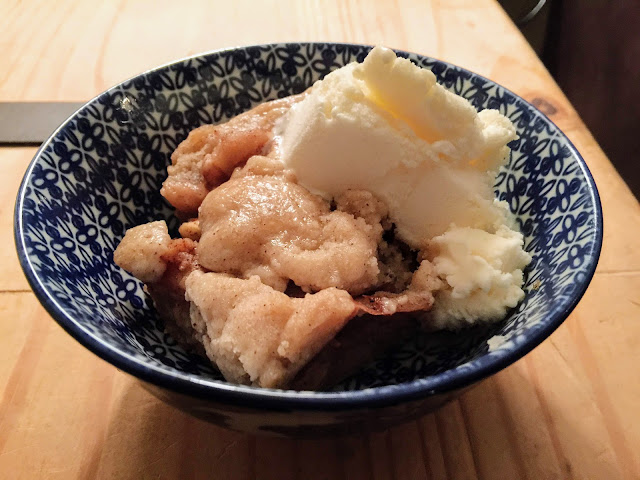 Thursday (fend for yourself night):  dinner via Trader Joe's.  Chicken sausage and cauliflower gnocchi tossed with pesto.  Hubs had the leftover pork chop and mashed potatoes. 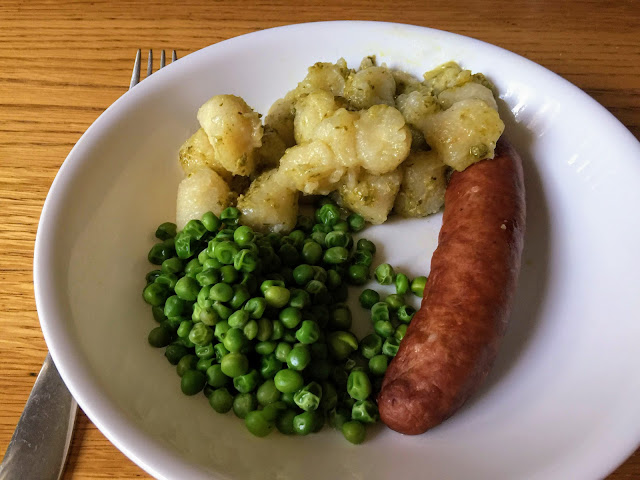 Friday (single girl night): the menfolk went off into the woods for boyscout camp.  Stepdog and I settled down to a single girls' weekend, starting with a veggie burrito and guac. 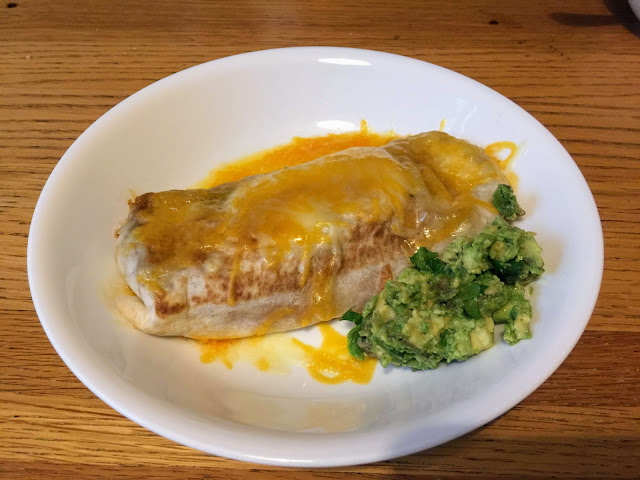 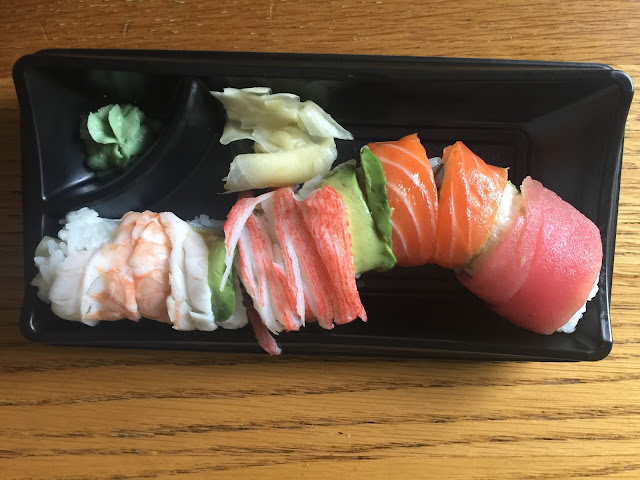 Sunday (family meal): Tacos!  Our standard family meal to celebrate the menfolk coming back from scout camp alive.  I made the rice and chopped the lettuce and tomato, and the rest is child labor.  Stepson #1 made taco meat and stepson #2 chopped the green onions and made the guac.  Stepson #1 carried everything to the table WITHOUT BEING ASKED. 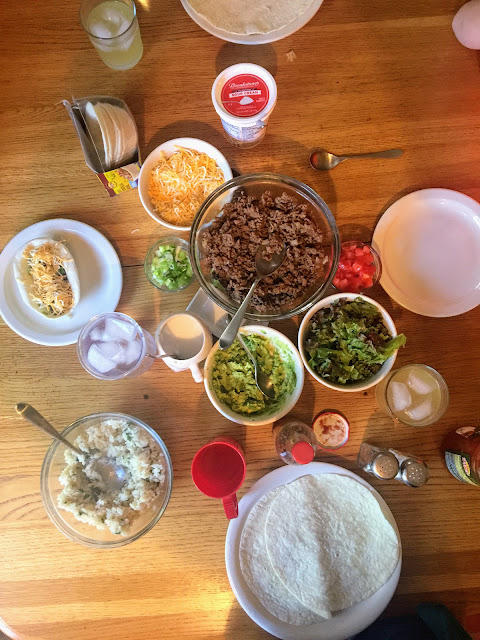 Meal Prep
Another batch of breakfast burritos and tacos for days. 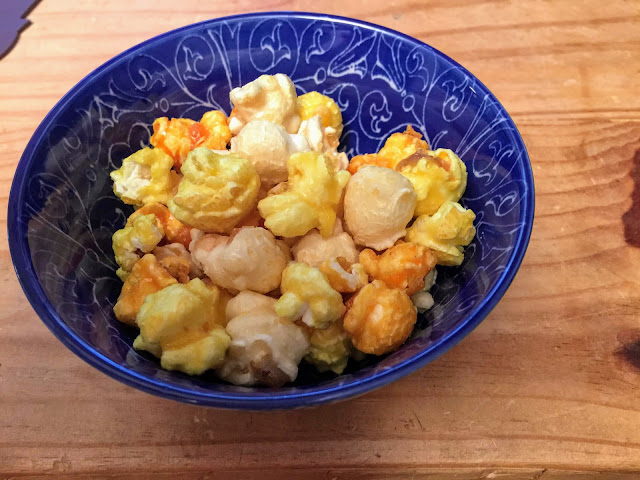 Treats: Banana bites gone bananas for stepson #1, strawberry bites gone berry for me, smashing s'mores for all of us, and candy corn popcorn for me.  So no, it doesn't taste like candy corn other than being sweet, but the colors are pretty and it was a fun treat.

Workouts
Monday: weights and 2 mile treadmill run
Tuesday: 5 miles of disaster outdoors.  It was super dark and super humid, and once the sun came up, it was super foggy. 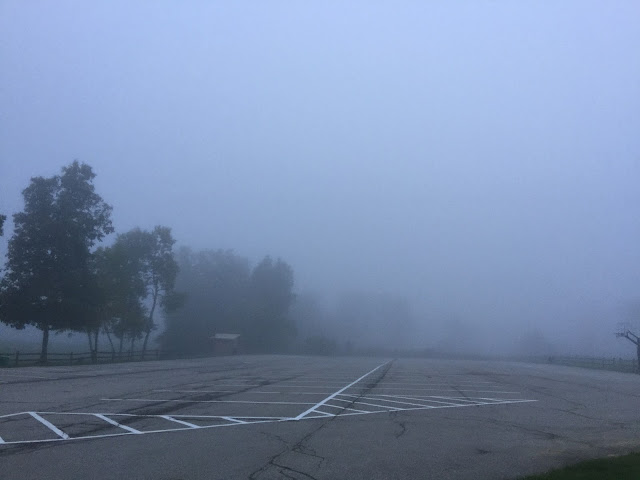 It's very sad, but this might be my last outdoor weekday morning run until spring.  It's just too dark out there for too long.  It's one thing to run the first mile in the dark, it's another thing be out there for three miles before there's any light.  Yes I'm on sidewalks most of the time, I wear a reflective vest and lights, I don't wear headphones, I have a flashlight...but one set of headlights passing by and I'm completely blind.  I'm not worried about people but I'm a little worried about animals and a lot worried about tripping over something and falling.  My running philosophy is that running is supposed to be an asset in my life, not a liability, so that's why you hear a lot of whining about the treadmill and not much about running in the dark and on ice and snow.
Wednesday: off
Thursday: by rights it should have been intervals, but my body wasn't into it so I just did a steady state 5 mile treadmill run, which felt good.  And then it hit me, just six months ago, the 5 mile steady state tready was my long weekend run.  It wasn't something that I just whipped out first thing on a weekday before coffee.  Running, I wish your progress was more obvious but I will take it when it happens.
Friday: weights and 2 mile treadmill run.
Saturday: 9 miles.  No, you didn't hear me: NINE MILES.  I've never run more than 8 miles before.  The only secret I have to pass on is that I did not put any pressure on myself to run fast, I just kept running.
After that I took stepdog on a cool down walk and later for her after dinner walk.  Other than that I didn't move for the rest of the day.
Sunday: off.

Stuff on the internet that I tried IRL
The Allie Keiffer Power Bun via Hungry Runner Girl.  Hair and running are tricky.  I keep my hair long enough to scoop up into a pony tail but not so long that it feels like a horse's tail swatting me when I run.  The problem is that if the pony tail gets wet in any way, such as all that rain we've had lately, or extreme humidity such as Tuesday morning, or let's be honest, from the sweat on my back, it knots up into a solid mess that is not fun (or quick) to comb out. 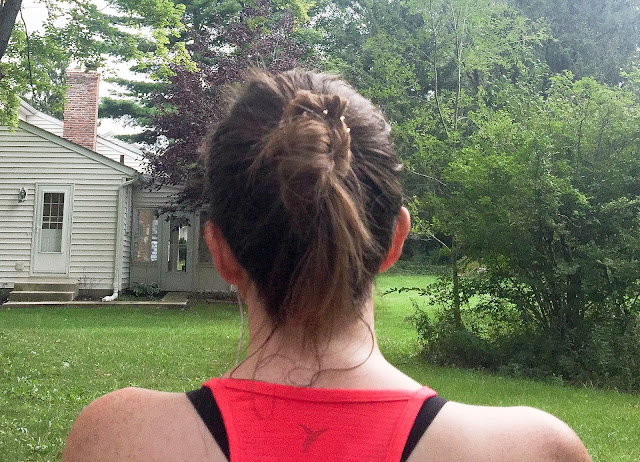 What you're seeing here is a normal pony tail secured with an invisibobble and then wrapped into a bun held in place by another invisibobble.  What you're not seeing - I had just run 9 miles without feeling or even thinking about my hair in any way.  I would not have believed that I wouldn't feel the weight of the bun or that it would have held up.  No tangles and I have the option to grow my hair longer if I want to.  Man, if everything I read about on the internet turned out this well...

Watching
(from the treadmill): How to Get Away with Murder for lifting days, Call the Midwife for running.  The latest season just came out on Netflix and I have missed this show.
(from the couch): Hubs and I tackled another episode of Ozark and Unbreakable Kimmy Schmidt, on my own I'm rewatching the Fred and Ginger movies: Follow the Fleet and Swing Time.

Posted by Birchwood Pie at 6:30 PM