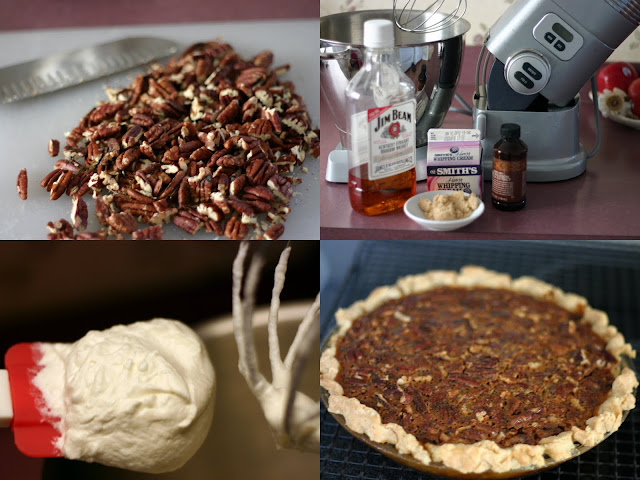 For many years, my Thanksgiving duty has been pecan pie.  I'd settled into a rut, using the same recipe for bourbon pecan pie, which was awesome in the sense that it had bourbon! and pecans! but otherwise wasn't that great.  The final straw was last year's cooking disaster.

The bourbon pecan pie recipe included pastry, which had previously given lackluster results, so I substituted a pastry recipe from one of my cooking idols, a source that can do no wrong.  The crust rolled out beautifully.  I poured in the filling and was just giddy as I slid it into the oven.  I went into the next room to relax.  20 minutes later I was interrupted by...smoke!

You see, that trusted pastry recipe had a lot of butter.  The pie had a low baking temperature.  Which meant that the butter literally melted right out of the crust and dripped to the bottom of the oven, where it produced great clouds of smoke.  At no point was there any danger of fire, but the end result was "smoked" pecan pie on a rancid gummy crust, a major oven cleaning project, and a lingering bitter smoky smell in the house.

All of which is to explain why I was in the market for a new pecan pie recipe.  I combined my trusted pastry recipe and "old fashioned" (aka no corn syrup) pecan pie filling.  No bourbon in the pie, but plenty in the whipped cream.  A winner through and through. 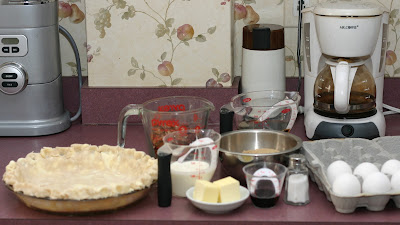 As usual, I made the pastry the night before and rolled it out the day of baking.  Once the dough is rolled out, put in back in the frig for at least 30 minutes.  Click here for a pie roll out tutorial. 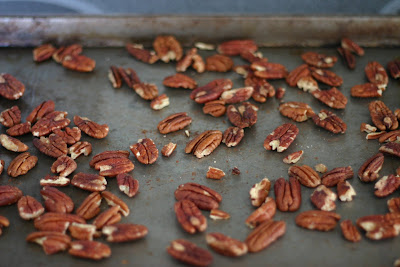 Toast the pecans on a baking sheet @ 350° for 5 minutes.  Be careful because the pecans will burn if left any longer.  When the pecans come out, turn the oven up to 450° (note that you will be turning the temperature back to 350° as soon as the pie goes in the oven). 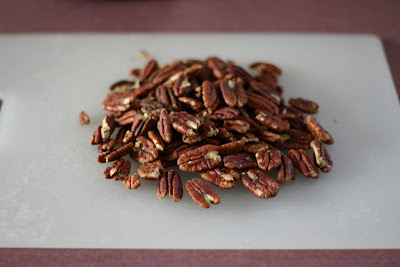 When the pecan are ready, they will smell so wonderful that you will be tempted to forget all about the pie and just eat the pecans then and there. 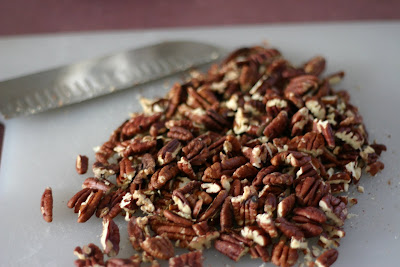 Chop the pecans very lightly.  You don't want a lot of whole pecans left, but you don't want "pecan dust" either. 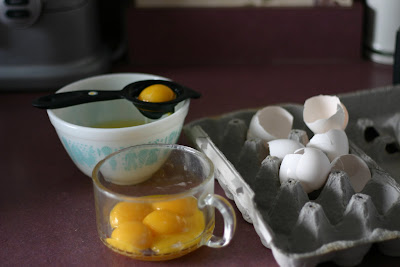 Now for the tedious part.  Separate the eggs and mix the yolks.  Note that you're left with 6 egg whites, a subtle hint that you'll be eating a few egg white omelets to make up for the pecan pie. 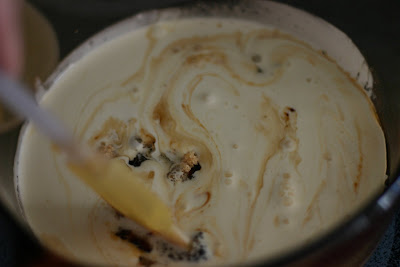 Heat a pan on medium and add the cream, brown sugar, syrup, and molasses.  Stir for a few minutes. 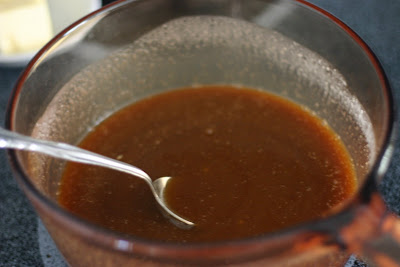 The idea is to get it warm and blended, and then take it off the heat. 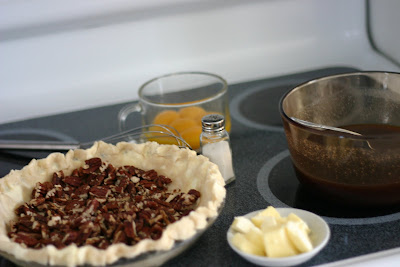 Put the pecans in the pie shell. 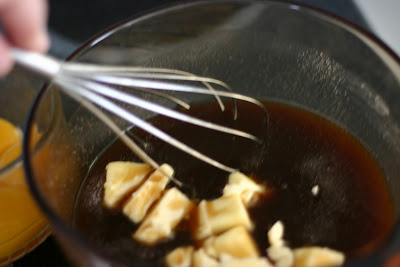 Add the butter to the still-warm filling and whisk to melt. 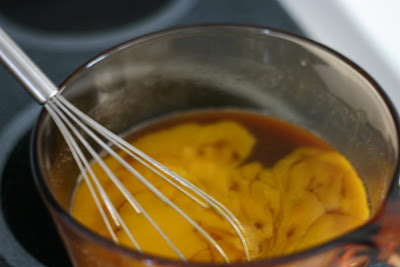 Blend in the egg yolks. 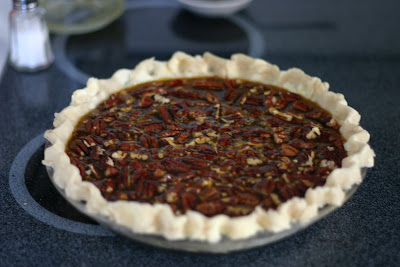 Pour the filling over the pecans.  Put the pie in the oven and immediately lower the oven temperature to 350°.  Place a baking sheet in the rack underneath the pie. 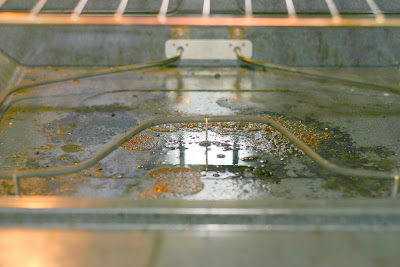 This is what the bottom of your oven will look like if you don't use the baking sheet.  No where near as bad as last year's ol' smokey incident, but I have another oven cleaning project on my hands. 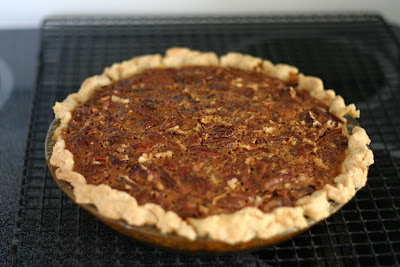 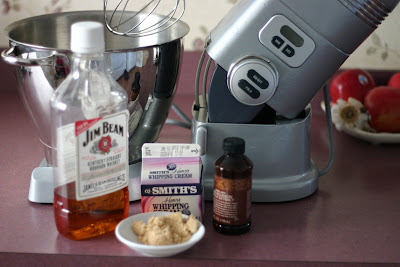 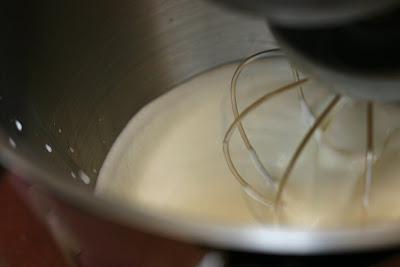 Whip the cream in a chilled bowl. 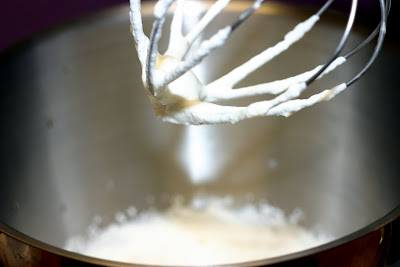 Let it form soft peaks and then add the bourbon, vanilla, and brown sugar. (NOTE: the original recipe said to combine all ingredients before whipping.  Liars!  I tried this and the cream didn't whip.  Luckily I had just enough time to make an emergency trip to the store to get more cream.) 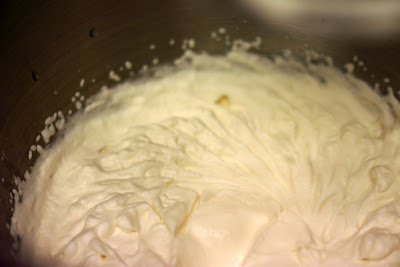 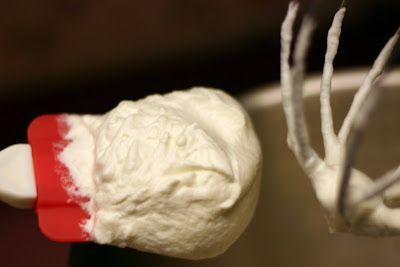 Posted by Birchwood Pie at 4:24 PM