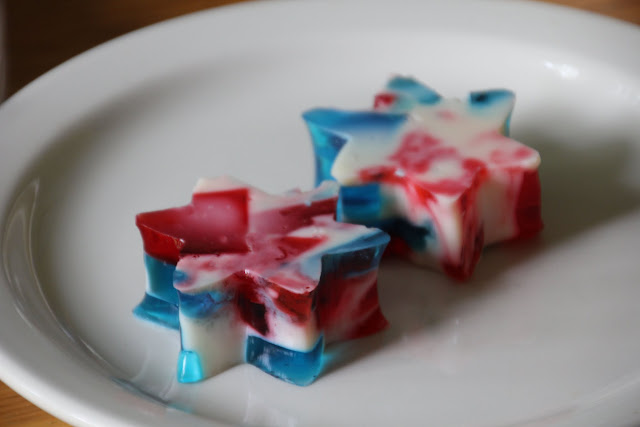 Someone told me that jello desserts were a kind of status symbol back in the day.  If you could make jello, it meant that you were far up enough in the world to have a refrigerator instead of an icebox. The legend has always stuck with me, and was the first thing that came to mind when I saw the Brown Eyed Baker's post on stained glass jello. My second thought was that this was a Pinterest fail waiting to happen.  But inspired by the half empty box of Knox Gelatine that I've been hanging on to for years, I decided to try it anyway...and learned that jello is fun. 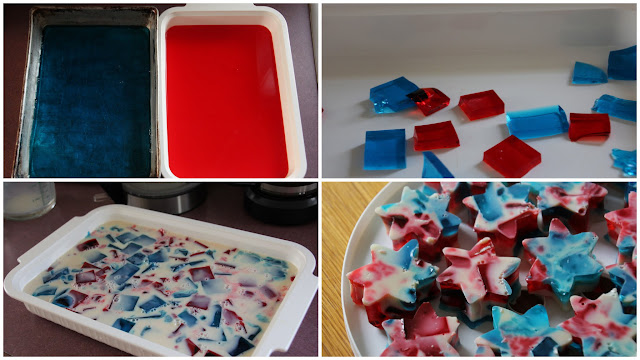 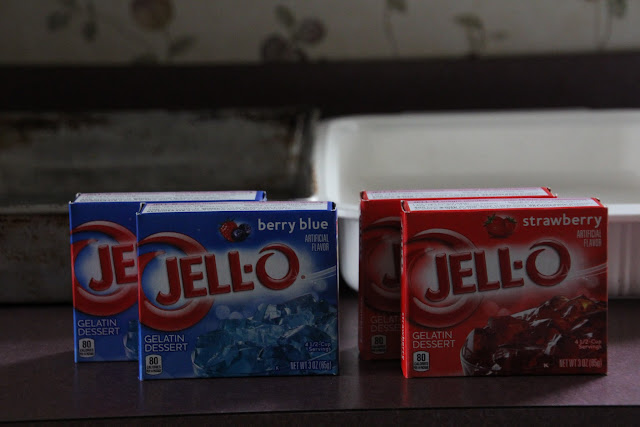 You can, of course use any color combination that you want for your stained glass.  I went with Berry Blue and Strawberry as the theme for July 4th. 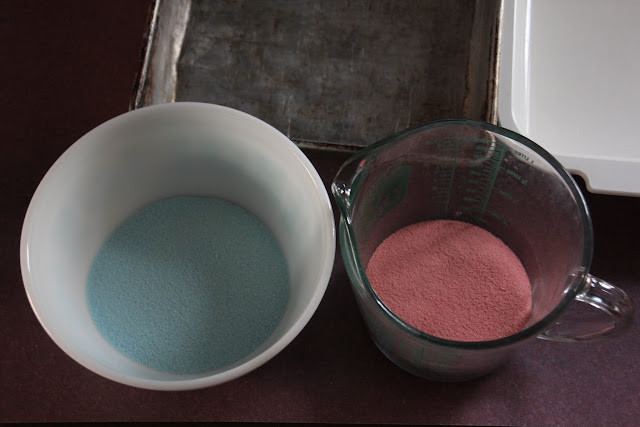 Early in the morning on July 3rd, I placed each color of jello in a small bowl. 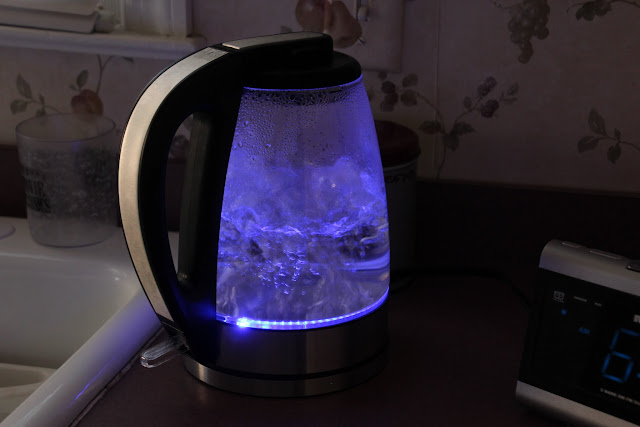 And boiled up four cups of water. 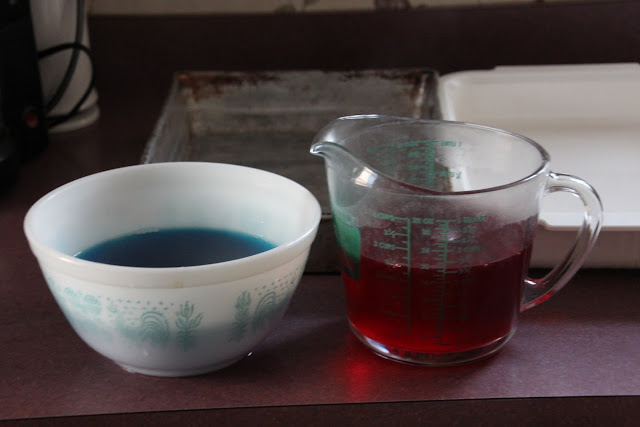 I stirred two cups of boiling water into each jello (one cup for each 3 oz box if you were making more than two colors). 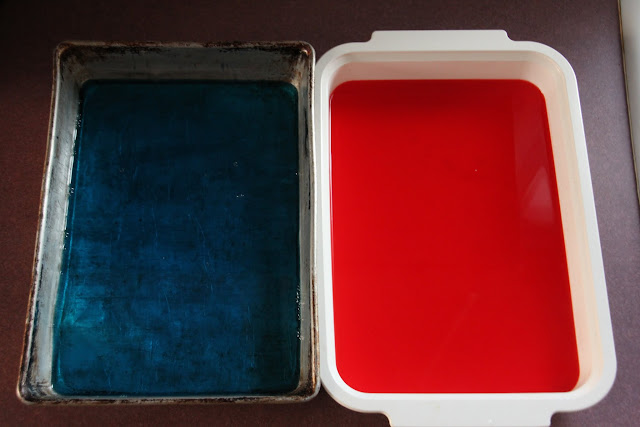 I poured the jello into ungreased 9"x13" pans and set them in the fridge for a minimum of 3 hours. 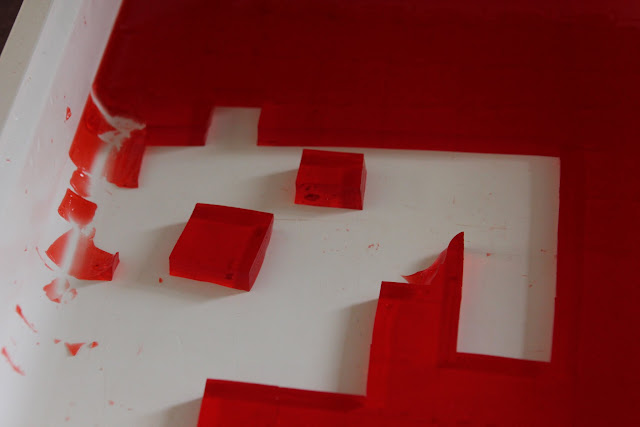 The next step was to cut the jello into squares.  You don't need to make any effort to get a uniform size, since the squares are going to get mixed up and cut before we're through here. 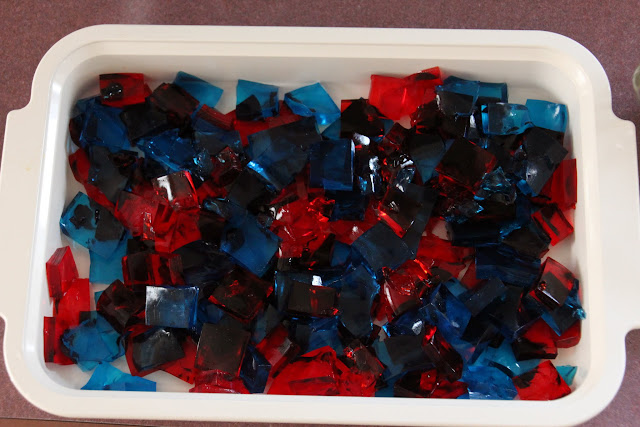 I placed the squares in a 9"x13" pan.  The original recipe says to do this carefully.  I didn't use any special care, I just alternated handfuls of red and blue and made sure the colors were well mixed throughout the pan. 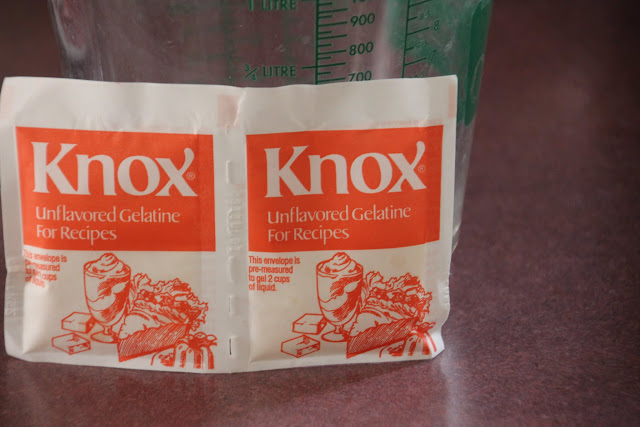 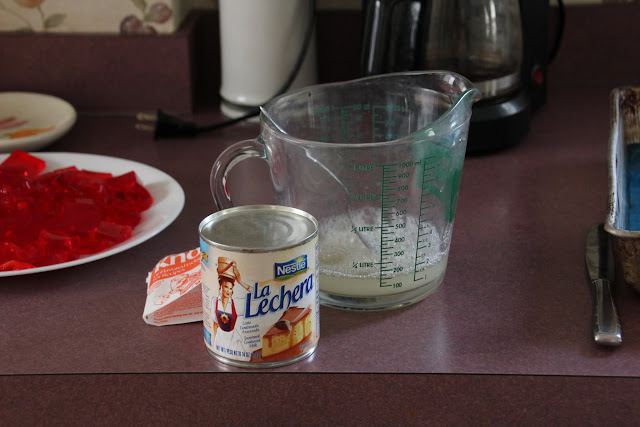 Place the two packets in a bowl and mix in a half cup of cold water.  Let it sit for a few minutes until it blooms. 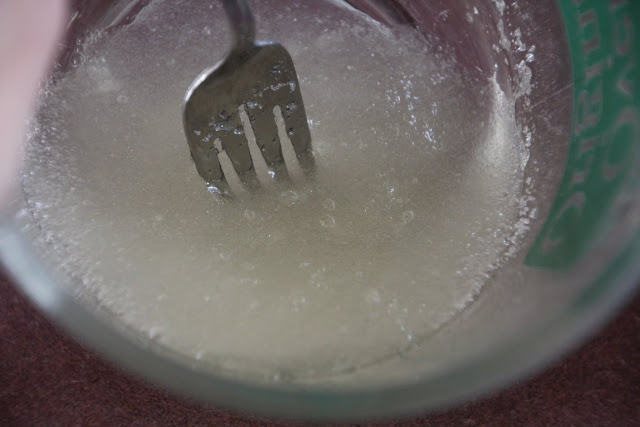 I didn't remember what "blooms" means when it comes to jello.  It's the thing that happens after gelatine sits in water for a few minutes. 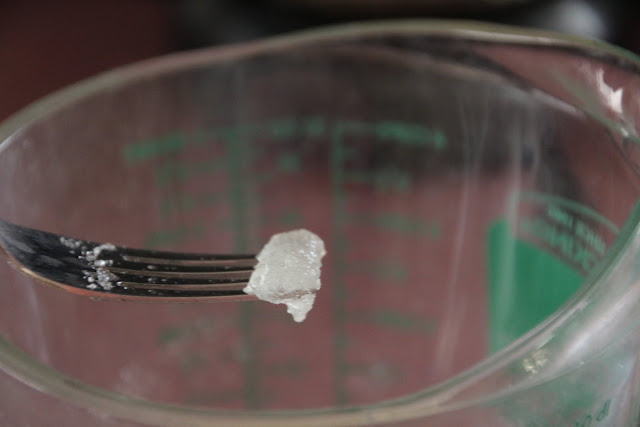 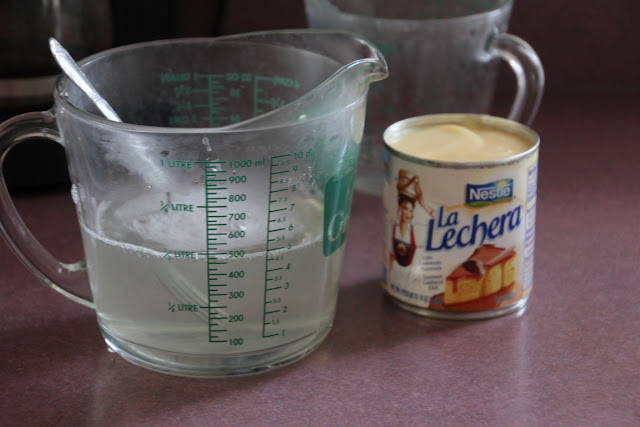 Stir in 1½ cups boiling water until the gelatin is fully dissolved.  Now stir in the sweetened condensed milk.  Let it cool to room temperature. 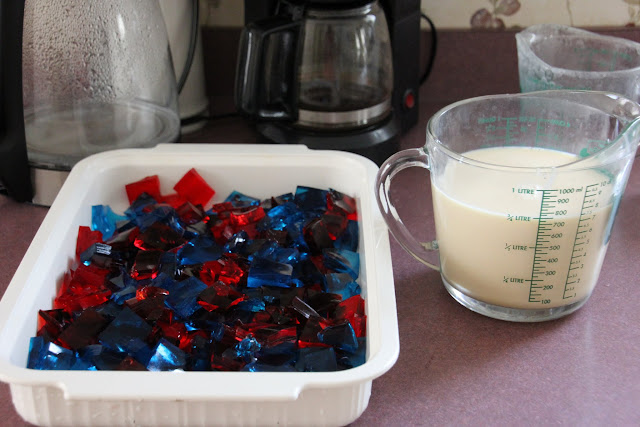 The first time I made this, I had serious concerns about the off-white tint of the milk and thought I had been pranked by the recipe.  But no cause for alarm, I promise that the final result will be white. 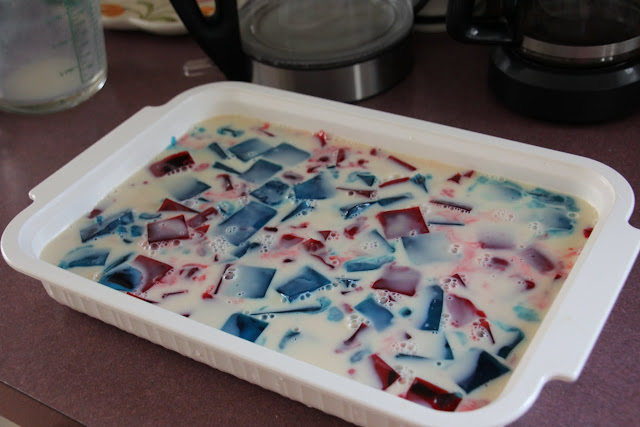 Pour the gelatin mix over the squares.  Try to break up any bubbles that form, but don't be fanatical about it.  Also, some of the color may bleed through from the red and blue blocks, but don't worry about it.  Place the pan back in the fridge for a minimum of three hours. 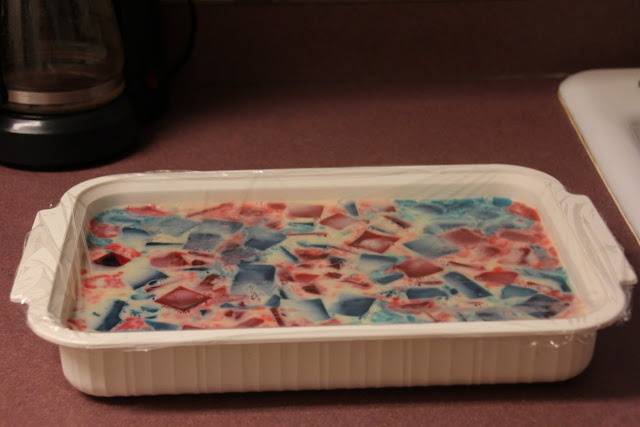 Once the jello was firm, I covered the pan in saran wrap and left the land of the purple counter tops behind and took my jello on the road. 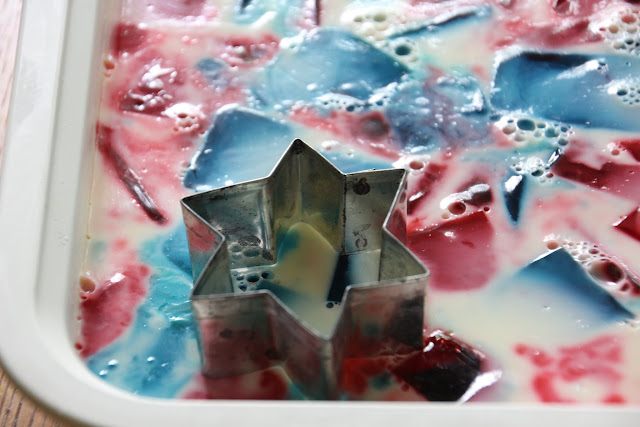 The next morning I embarked on the final step, cutting the jello into stars.  If you're in a less ambitious mood, feel free to call it a day at this point and just cut the jello into blocks. 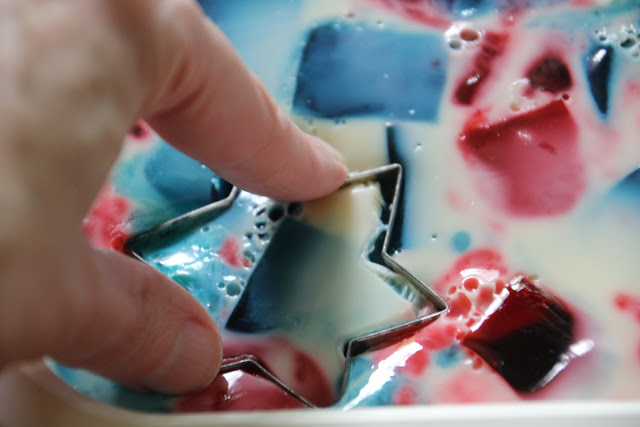 Press the cutter into the jello, twisting as needed to loosen it from the bottom. 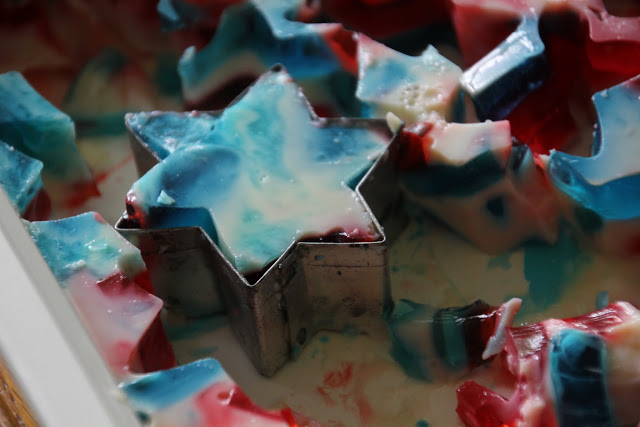 Carefully lift the star out of the pan. 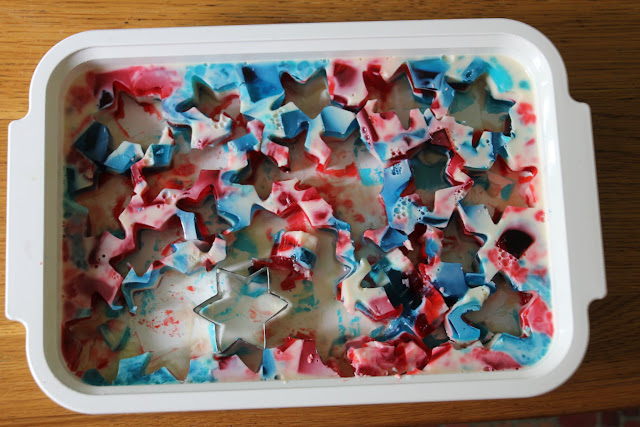 Cut out as many stars as you can.  I got 22, someone with better geometry skills could probably get more. 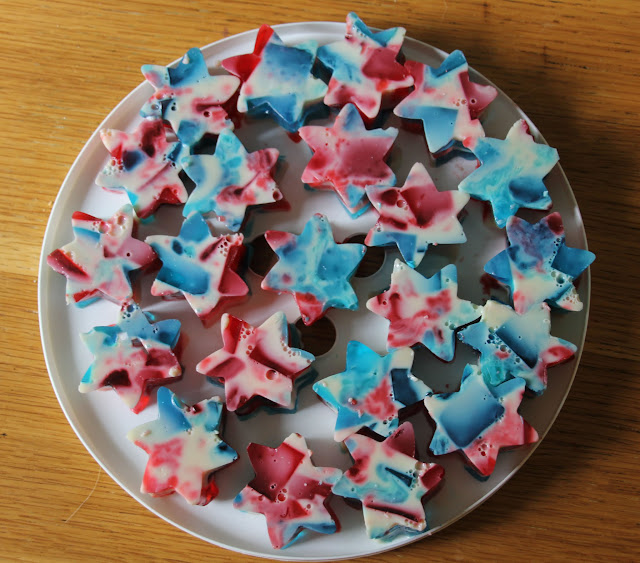