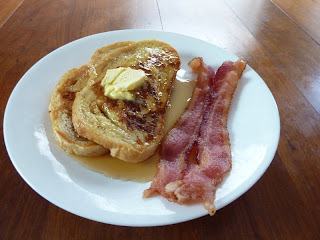 During the week, the Birchwood kitchen serves excruciatingly healthy breakfasts.  On weekends...it's time for a treat.

Recipe
(Heavily adapted from Devin Alexander's The Most Decadent Diet Ever!) 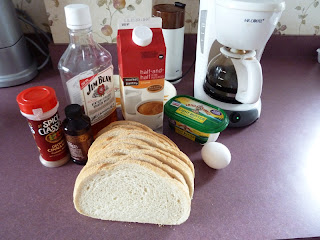 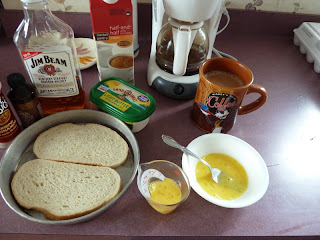 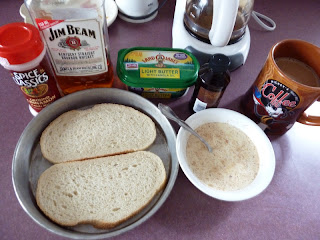 Mix egg with half & half, sugar, a sprinkle of cinnamon, ﻿a few drops of vanilla, and the shortest pour of the optional-but-recommended bourbon. 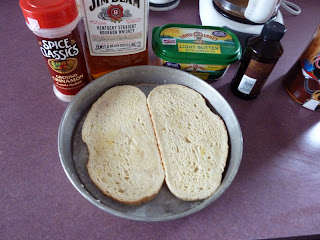 Pour mixture over bread.  If the bread is especially thirsty, as mine was, the mixture will be almost totally absorbed.  Turn bread and make sure it's uniformly covered with the mixture. 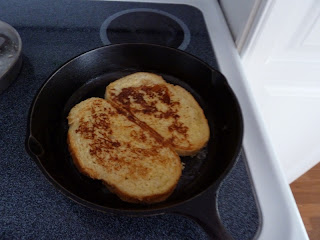 Heat a skillet on medium.  Spray skillet lightly with oil or a small amount of butter.  Cook bread approx 4 minutes per side, discarding any excess mixture.  While cooking, prepare bacon and heat a small amount (2-3 tablespoons) of syrup.  Feel free to add the smallest amount of optional-but-recommended bourbon to the syrup.

Pour syrup over toast, top with a pat of butter, and bliss out.

This recipe started life as the "french toast with sauteed banana" recipe in Devin Alexander's The Most Decadent Diet Ever!﻿, a genius cookbook of very basic, very delicious recipes.  The original recipe calls for fat free milk and egg substitute, approx 35 calories total.  I use half & half and real egg because I always have those ingredients on hand--but by doing so I'm boosting the calories by about 100.
Posted by Birchwood Pie at 2:40 PM

Email ThisBlogThis!Share to TwitterShare to FacebookShare to Pinterest
Labels: Breakfast