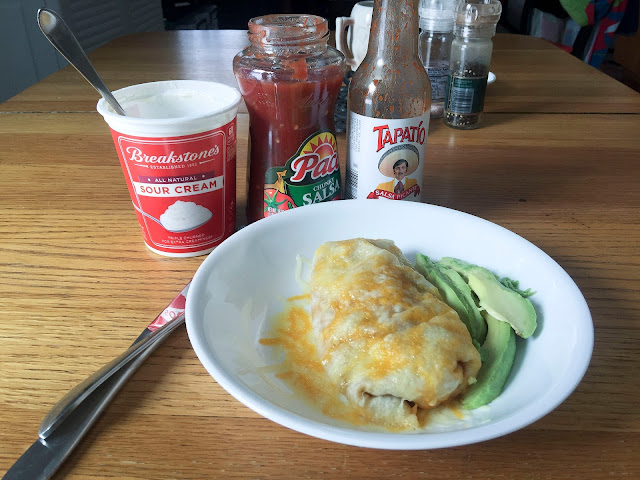 A weekly round up: eats, workouts, watches, and reads.  Winter Plague Edition.
Last week stepson #2 came down with a nasty bug, so serious that he got not one but two sick days (keep in mind that his parents run a tight ship, this is the first time I've ever seen these kids get a sick day).  He spent one sick day with his dad and one with his mom, long enough to get them both sick.  My husband spent Sunday - Wednesday in bed and is still under the weather. 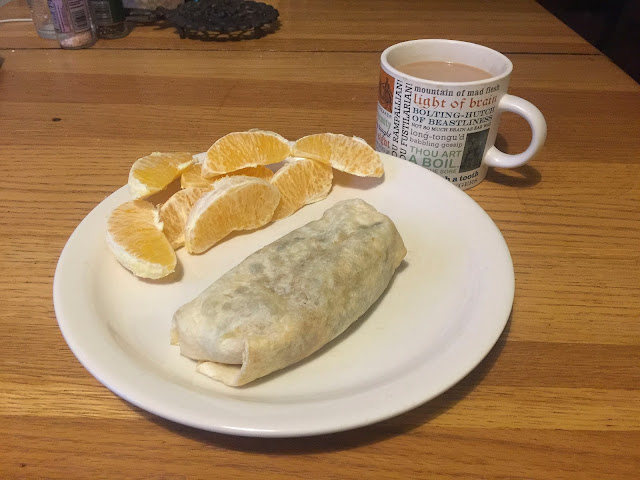 Egg, avocado, sausage, and cheddar scramble with half an English muffin with marmalade 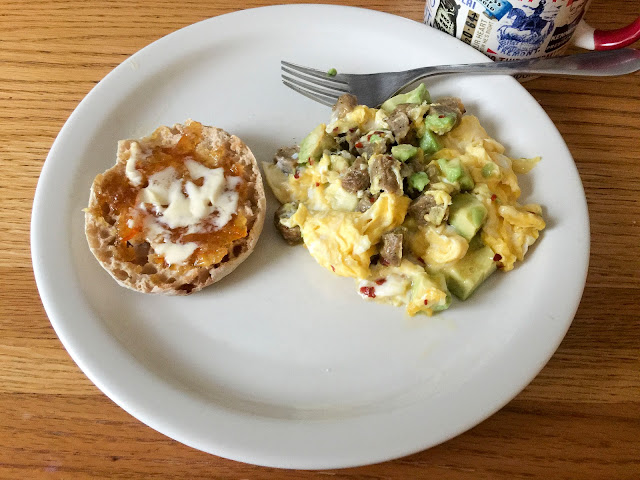 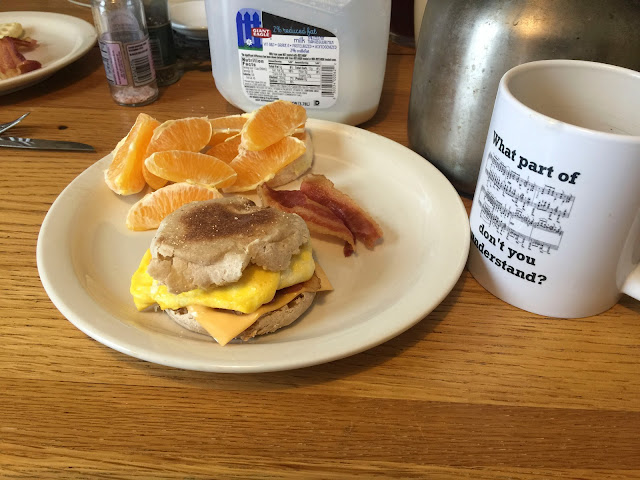 Egg on toast with sausage 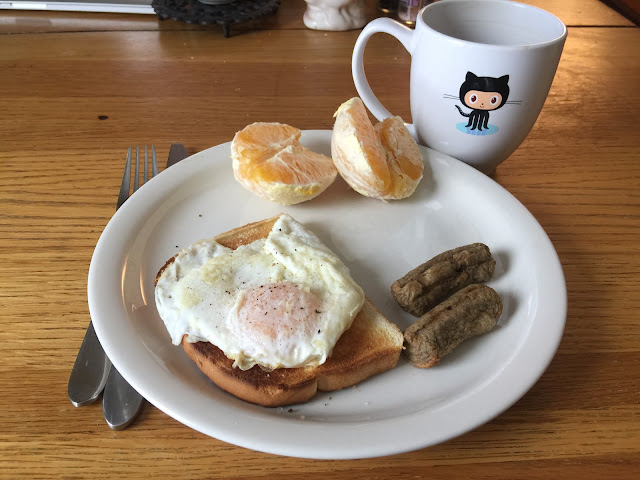 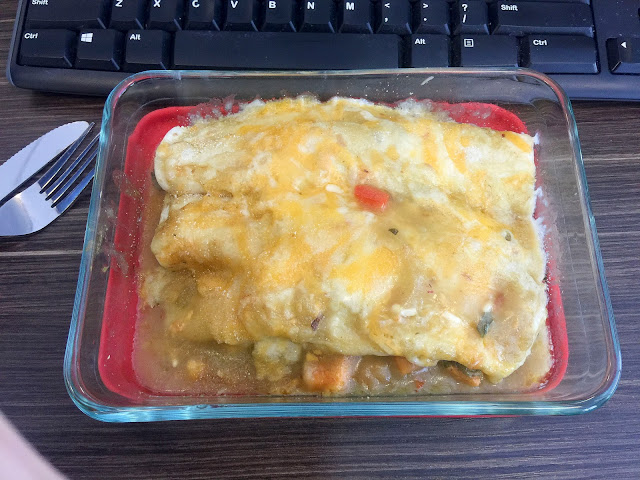 T: Stuffed shells with spinach, mushrooms, and artichokes (from here)

W: Adult snow day!  Veggie burrito with all the fixings. 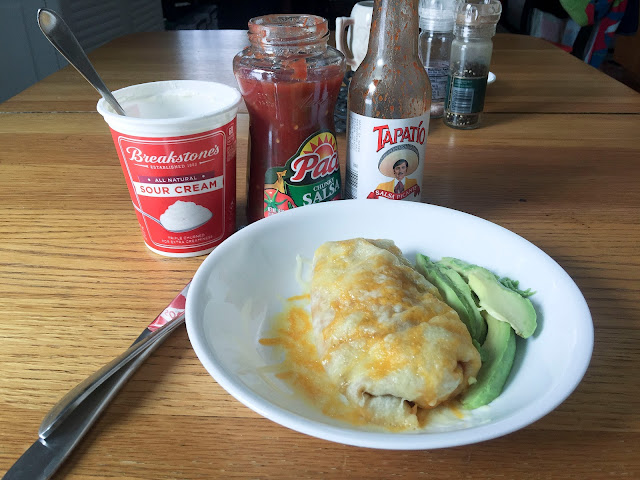 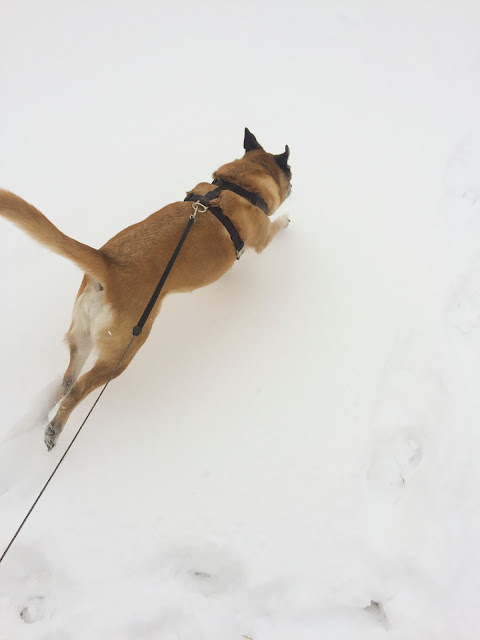 F: Veggie burrito in the office.  Without all the fixings, just salsa and sour cream.

T (family meal): tortellini and marinara with garlic bread on the side

W (date night): this was the first night that hubs was even semi human after spending three days holed up on the couch with a bag of cough drops.  We decided that tomato soup and grilled cheese was the way to go.  I went out to the store to get hubs more cough drops and he did the cooking.  Hubs is the designated grilled cheese chef in our house. He knows exactly how much butter to put on the bread - I don't ask, he doesn't tell, and the sandwiches are divine. 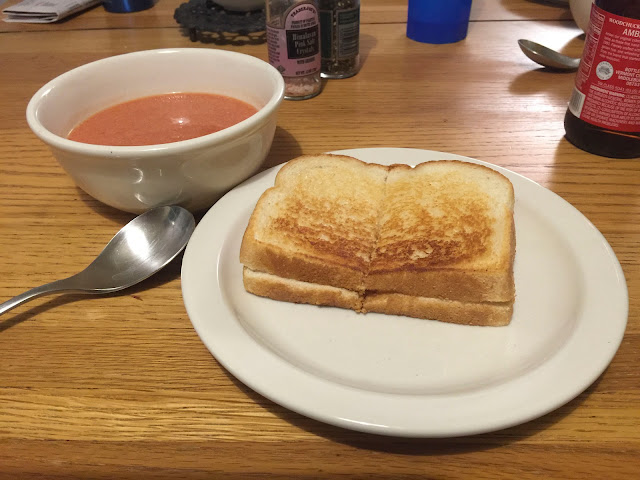 H (date night #2): Chipotle!  Hubs was feeling better so we treated ourselves to a second date night.  Normally Thursdays are my designated laundry and house cleaning night but I was happy to be talked into spending the night on the couch with my sweetie.  I still did laundry and let the cleaning go for the week.

F: Family date night!  Both stepsons have been killing it in school lately and each had some serious accomplishments to celebrate.  We went to their favorite sushi restaurant.  They get their love of (cooked) sushi from their mom and I am 100% on board.  Hubs is a die hard fish hater, which includes sushi, so he had a stir fry and a side of teasing from the kids and our waitress.  It doesn't bother me that he won't try sushi, I figure that's more for the rest of us.

Weekend Dinners:
S (single girl night): My men had scouting obligations that kept them out of the house from noon to late at night.  I finished my run in the morning and then showered, got into sweats, and staked my claim to the couch and TV.  I thought about making pizza, but in the end decided to be lazy and grab a veggie burrito out of the freezer.  Let me tell you how lazy I was that day.  On second thought, let my fitbit tell you.  Keeping in mind that I got 10,000 steps from running five miles and 2,000 from walking stepdog, that leaves 1,686 steps for everything else.  Now that's a lazy day! 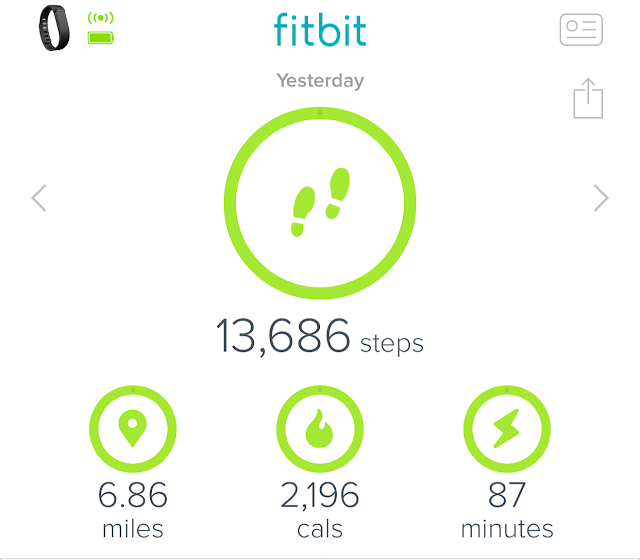 Meal Prep:
Moar breakfast burritos
Shrimp Curry Bowls via Lean Green Bean.  I mentioned before that I just cook the shrimp for a few minutes instead of cooking them the entire time.  And I added Kefir Lime leaves, which I learned about from PaleOMG and yum, that's been the missing ingredient in my thai curries all this time. 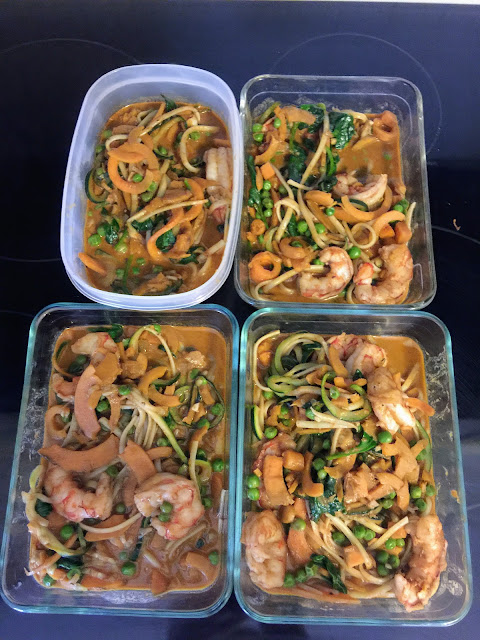 Watching (from the couch): Hubs and I have been watching Band of Brothers, but after everyone being so sick, I wanted something lighter.  On the spot, hubs came up with Ash vs the Evil Dead on Netflix.  All the gore of Band of Brothers but zombies and laughs.  Perfect.  With the kids on Friday we saw The Hunt for Red October (stepson #1 just read the book).  On Saturday's single girl extravaganza, I watched more episodes of Married at First Sight than I'm going to admit to and episode 2 of The Sinner.

Reading: Yeah, This Must be the Place went on the DNF list.  Lots of characters, lots of stuff going on, and I just couldn't find a character that I liked or get any semblance of a plot to latch onto.  I threw in the towel and took a look at my bookshelves and saw an old friend wanting to get reacquainted.  Dover One by Joyce Porter.  The Dover series is a spoof on the English detective genre and I've read each book one million times.  I'm so happy that it's been long enough since the last reread that I'm ready for them again.

Your turn:
Posted by Birchwood Pie at 7:00 PM