This summer I shook up my workout routine with the Women's Running 10 Week Training Program to Boost Your Speed.  My mile time improved by over 30 seconds, I learned a ton, and came away with all kinds of thoughts and plans for my future running.


What is it?
The name kind of gives it away...it's a 10 week running program focused on improving your mile time.  It was written by Eric Orton, who you may know of from the book Born to Run.

You start by running a test to determine your mile time and use the result to calculate seven speed zones.  The program takes you through 5-6 days of running per week running at a variety of paces based on your speed zones.

All of the workouts are time based, not mileage based.  There are often options for the number of intervals and the total time of each interval.  The program describes the days of each week as "day 1", "day 2", etc so you can adjust it to fit in your weekly schedule.  In general the pattern is:
Day 1: easy
Day 2: speed workout
Day 3: easy
Day 4: speed workout
Day 5: off or easy
Day 6: usually a longer easy run, though there were a few workouts in there.
Day 7: off

Why did I do it?
I felt that my running progress had plateaued and was looking for something to shake things up.  A PT that I saw in June suggested the program.

How I approached the training plan
I wanted to keep my weekly mileage on the higher side (high 20's) and keep my Saturday long runs around 8 miles.  I'd been running 5 days a week for a while, and I used the program as a nudge to start running 6 days a week.

Easy runs: I have a bugaboo about running less than 3 miles, so if the program called for 20-30 minutes or 30-40 minutes of easy running, that was 3 miles in my world even though it takes me a bit longer than 30 minutes to run 3 miles.  Easy runs of 40-50 minutes became 4 mile runs.

All of the easy runs were supposed to be a speed zone 1 pace, which for me was 12:45-13:15 per mile.  It's super tough to run that slow, so I went by feel and ran an easy effort, somewhere between high 11's and mid 12's.  There were a few days where I had energy to burn and ran the easy runs fast because I could, and of course there were a few draggy days where I came in closer to 12:45 pace.

Speed runs: I started these with a 20 minute warmup and somewhere between a 1-2 mile cool down depending on how much time and energy I had afterwards.  I always did the maximum number of reps and the longest speed (example: the week 3 day 2 workout is 4-6 x 60-75 seconds of speed...so I did 6 x 75 seconds) - I am most definitely not saying that you should do the maximum, I'm just saying that's what I did.  The speed workouts ranged from 4-ish to just over 6-ish miles.

Much to my surprise, I found that I was coming in fast on the speed workouts and struggled to slow down to the prescribed workout paces.  This isn't because I'm fast, it's because the only speeds that are intuitive to my body are "normal" and "balls to the wall".  I don't have a clue what it feels like to run at a 10:45 pace vs a 11:15 pace, so I programmed all of the workouts and paces into my Garmin and let it do the work.

I am not a good heat runner and because I did the program in the summer, it was always in my mind that one day it would be too hot to run.  Sure it was hot, but not enough to stop me from hitting my paces or having to skip a workout.  I often did my Saturday long runs on the treadmill, but never had to take a bread and butter speed workout inside.

Recovery Intervals: I asked the PT who gave me the program if it mattered whether I walked or ran for the rest intervals.  Her answer was duh run because the speed effort shouldn't be that difficult.  Eric Orten says "feel free to walk or err on the slow side" and that's what I ended up doing.  I usually walked for the first half or first minute of the rest interval and then switched over to a slow jog and started ramping up my speed as the rest was ending.  On the one hand I think the heat played a factor in my having to walk for recoveries and on the other hand I think it's fine and not worth thinking about as much as I have.

How closely did I follow the plan?
You need to understand that I have never ever been able to follow any structured training plan before.  Every single one that I've tried has been either too easy or too hard, so I've bailed.  So when I tell you that I pretty much hit this one on the head, I think that speaks a lot to how individualized this program is.

By the numbers: of the workouts that I completed, there were 132 speed intervals.  I hit the average pace for 89 intervals, was too slow on 5 intervals, and too fast for 38 intervals.

Oops: I made an error in calculating my speed zone 7 pace, which I thought was 0.99x mile pace or faster, but it's actually 0.95-0.99x.  I calculated my speed zones off of the paper printout that the PT gave me and those lines were missing from the printout.  I didn't figure this out until the after the last speed zone 7 workout of the program, so all of my speed 7 efforts were all out.  I wonder what if any difference that made to my training and results.

BTW, the article links to a speed zone calculator, but it came up as a blank page for me no matter which computer or browser I used.  I can't tell if the page is broken or if it's a subscription only feature, but in any case I calculated my speed zones in Excel.

A week by week recap 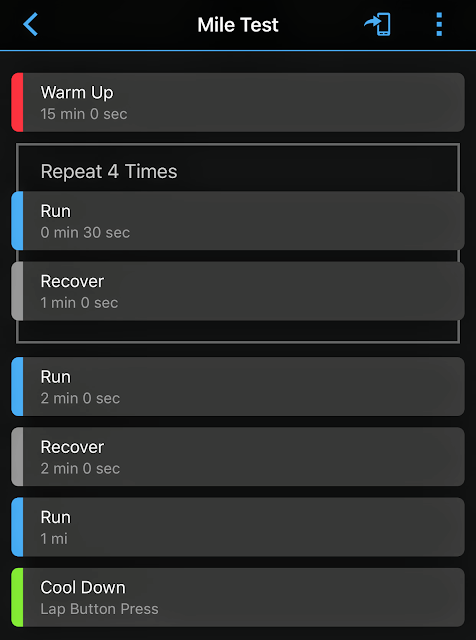 Takeaways
Minutes over miles.  I'm a miles girl through and through, but I think part of the reason why I was able to hit my paces is that I was running by time...I have no emotional attachment to "run 2 minutes at speed zone 6".  If the instructions had been "run 0.25 miles at 5k pace" there's an emotional component to that for me.

Running six days a week is NBD.  In the last year and a half I've gone from running 3 days a week to 5.  Many times I've thought about adding a 6th day but I could never get myself to do it until this program.  I was amazed at how natural a transition it was.  And yes running 6 days a week isn't right for everyone and the first and maybe only rule of running is "you do you", and you all know that right?

I get the "run your easy runs easy and your hard runs hard" thing now.  On days when I pushed my easy pace, I noticed that running became more difficult for the next few days.  As someone who is trying to run faster, the last thing I want to do is run slow, but I see the benefit now.