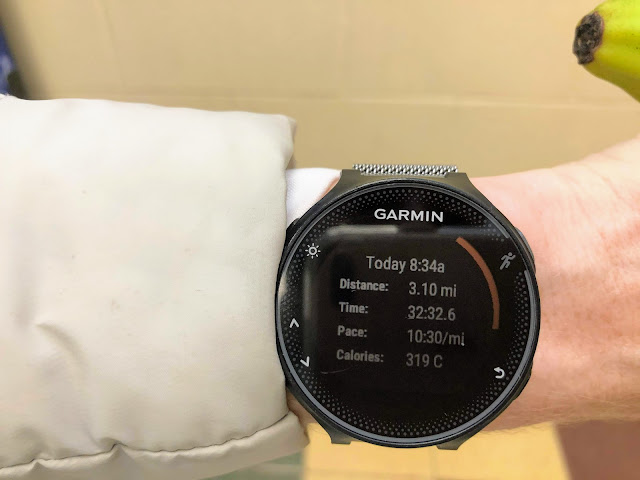 Exhibit A: the picture that I post every time I run a race.

Exhibit B: the picture that I'm posting for my first race of 2020: 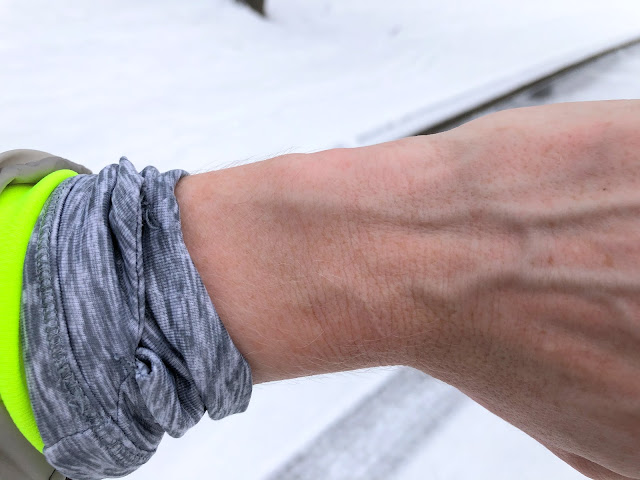 No I didn't forget my Garmin, it was not invited.  Last week I left off with the tease that I would be doing something outside of my comfort zone, and here it is.  A no Garmin/no headphones race a.k.a "naked running".

Here's what went down in the world of sweatin'  this week.  17.1 miles of running and one weight workout.

Monday: ouch!  I started the week with quite the case of DOMS (in the wonderful words of Kim, "always earned never given") from Sunday's weight workout.  I struggled through 4 miles at an easy pace on the treadmill, I will not disclose how many breaks I took to get there.

Tuesday: 5 treadmill miles, I didn't feel like doing speed work so I just ran easy and it gave my body the reset that it needed.

Saturday: A Prediction 5k, more about that in a moment.

Sunday: by rights I should have done weights but I'm not feeling it, back to the drawing board on how to fit weights in with running.

Highlights of this race:
My first plan for this race was to take a shot at the elusive sub 30.  My 5k PR is 30:41 and that's on a perfectly flat course at a race that always has perfect weather that I've run a billion times.  I wasn't familiar with the area where this race was but I figured if committed to the goal and ran at "just below puking" intensity I would have a shot. The wrench in the plan was that being a race in February, a major storm came in on Wednesday and was still going strong as of bedtime the day before the race.  Let's put it this way, if yesterday had been a normal long run day, I would have opted inside on the treadmill in a heartbeat.  As it was, I figured that as long as the race wasn't canceled it was probably safe to run.

In view of the weather, I changed my goals as follows:
A goal: finish
B goal: start
C goal: pick up race packet

The race was held at a park and the course was two loops of a paved pedestrian trail that went around a lake.  The trail had been plowed and salted but there was still snow and ice underfoot.  On the plus side, it was sunny and there wasn't much wind.  The most difficult part of the race turned out to be achieving my C goal, which was a long walk up an unshoveled path to a park gazebo and a good bit of time waiting in line in the cold.  Once I had the goods it was 10 minutes until start time and I hung out in my car with the heat blasting.  I really, really needed to pee but couldn't bear the idea of using a freezing porta potty, so I sucked it up and figured it would give me extra incentive to run fast (I took care of business after the race and yes the temperature made it a truly dreadful experience).

I wore two pairs of running tights (fun fact: I own only two pairs of running tights so I wore 100% of my running tights to the race), two shirts, my running jacket, gloves, a neck gaiter, and a hat.  The only skin that I had exposed was the area between my eyebrows and my chin.  At the start line the runner beside me, who was identically dressed, said "it's my first time naked" and I said "me too".  There were 200 runners total, which I thought was really good turnout for a freezing February morning and it occurred to me that if there was ever a time to use the phrase "like minded people" this was it.

So how'd I do?  From left to right: gender, age, actual finish (gun time, it wasn't a chip race), predicted finish, and delta to predicted finish, which was the ranking in the race.  The top finishers were 2 seconds off their predictions and the "back of the pack" was around 10 minutes off.

So I didn't sub 30, but it was as good as goal as any for the race.  Assuming that I run this race next year (um it's a $5 race, why wouldn't I run again?), I'll use my Turkey Trot finish time as my prediction.  That's the picture that I started this post with, the race times were just 2 seconds apart.

Headphones Recap: not having music was a total non issue, it just wasn't something that I thought about at all.  Point taken for future races.

Garmin Recap: yes I missed it and I think I would have pushed myself a bit more if I'd had the feedback on my pace.  I'm a nut for All The Data and I have no idea whether the course was long or short, what the elevation was, what my splits were, yada, yada. So I have zero desire to be a "naked" runner but I did take the rest of the day off from my Garmin as a tribute to the spirit of the race.  Though my Garmin would like to point out that I slept with him the night before because he was my alarm clock and he woke me up for the race to start with.

Weather Recap: the cold became a non issue as the race went on, I was definitely out of my comfort zone with the snow and ice underfoot but hey it's February and it was what it was.

Swag Recap: I love it when a race has something for every member of my family.
That's hella swag for $5.  But there's more: the top 10 finishers got free entries to our big time area races.  The winning crowd was 2 seconds off their finish time, the "back of the pack" was in the 10 minute range.  So what I love about this race is that any runner (or walker) can win it.

P.S. about that $5 entry, this race is a tease to join the company's race series and it's very clearly stated on the registration page that the race has a high likelihood of being canceled due to the time of year.

Has anyone else done a prediction race?  Thoughts?
Posted by Birchwood Pie at 11:07 AM