Weekly Eats: Getting My Act Together 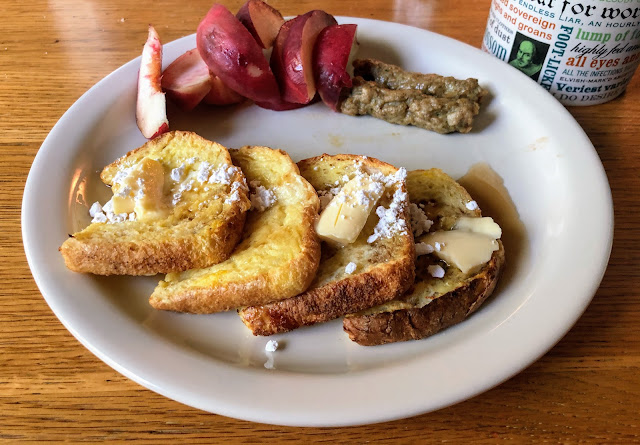 A weekly round up: eats, watches, and reads.  I started this week completely unorganized, which has been my standard operating procedure lately, and then got my act together and made some good food.  And watched a bunch of TV.


Breakfasts
On weekdays there are a lot of Cliff bars going down.  On Saturday I made air fryer French toast for the first time in a while.  And yes my coffee cup in the corner there is the Shakespearean Insults Mug which endlessly delights my stepsons. 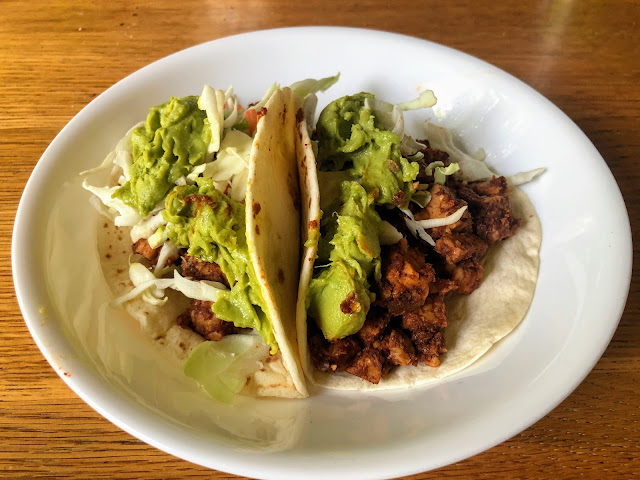 I made up a big batch of Pinch of Yum's tofu sofritas except with tempeh in place of the tofu.  Some days they showed up in tacos and other days they showed up in the trademarked Birchwood salads: roasted sweet potatoes, rice, salad mix (coleslaw mix this week), avocado, and often some tortilla chips on the side to help scoop things up. 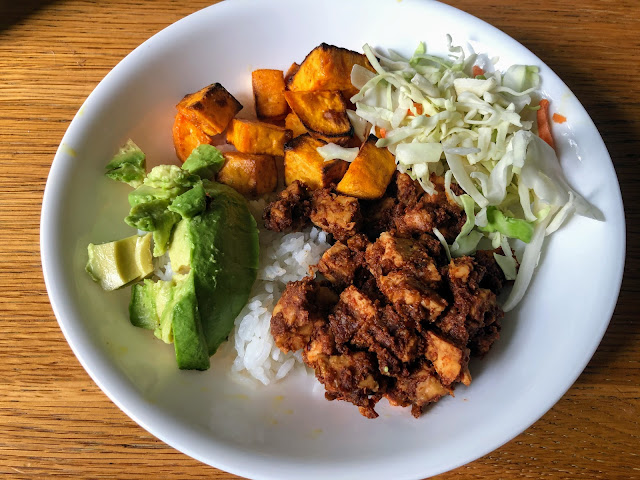 And finally, I had beef shawarma for takeout on Friday and was motivated to try a homemade version.  I followed *most* of this recipe which is to say that I took a giant swag at it.  I didn't have all of the spices and flank steak was a bit cheaper/available in smaller quantity than beef chuck.  I guesstimated that one hour of Instant Pot cooking time for a 2 & 1/2 pound roast was 35 minutes for a 1& 1/2 pound flank steak.  And I didn't bother to crisp it up afterwards because it looked good and I was hungry. 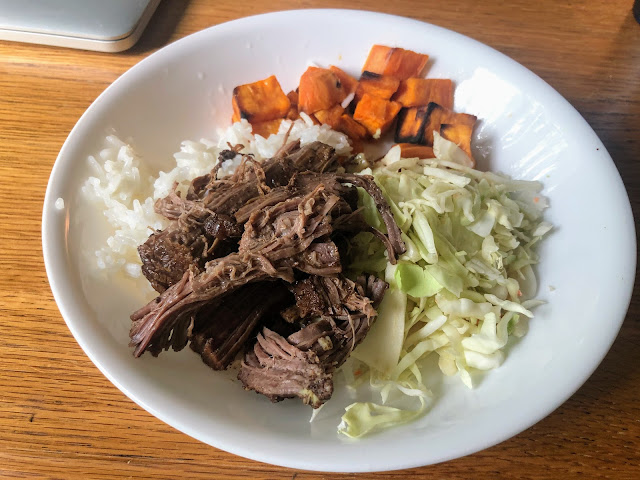 So in a roundabout way I'm saying that I did something very loosely based on the recipe that I linked to and it was very good.  Next time I will get the spices that I was missing, maybe cook it for 40 minutes, and also use more garlic cloves because I like spreading those over the meat.  And I might even crisp it up, I'm just nervous about overcooking the meat.

Dinners
Monday: this week started like so many others recently where I had to work late/everyone else had to be somewhere early (er...everyone had to be on a Zoom call early) so I let my better half cook for us. 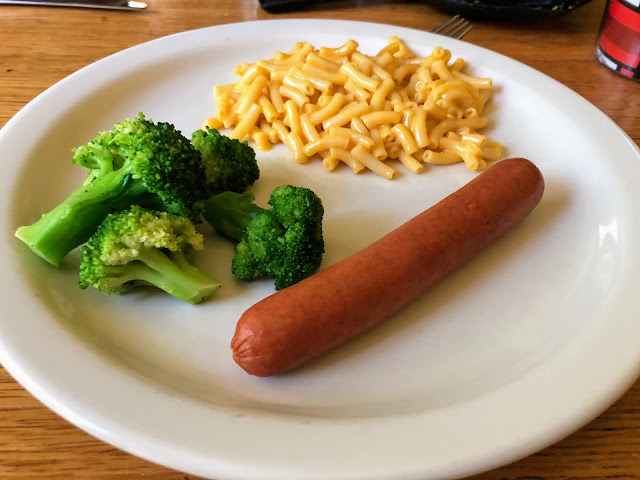 Tuesday: I acted like a responsible adult and took care of my family for a change.  I brought out the leftover barbacoa beef that I'd stowed in the freezer and turned it into enchiladas (Jo Cooks sauce). 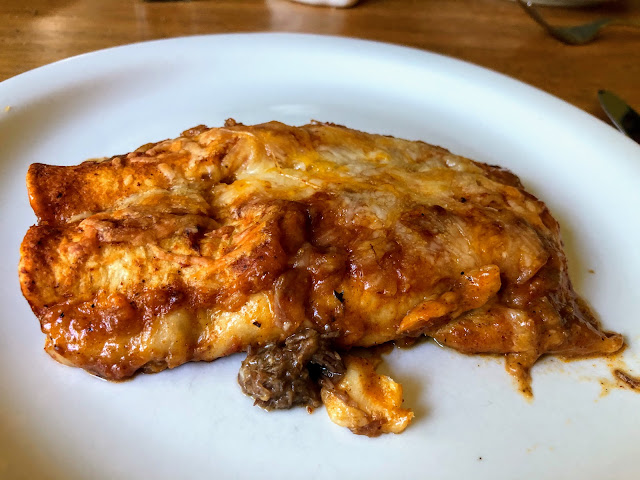 Wednesday: leftover cleanout.  The adults had pasta from the weekend and the kids had chicken nuggets with leftover mac n'cheese. 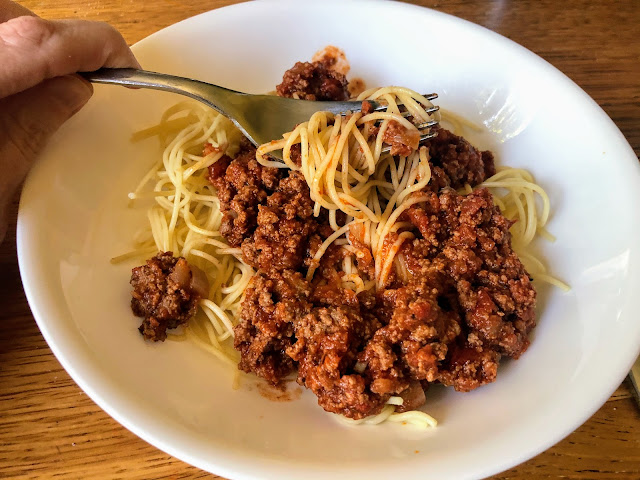 Thursday: everyone had pasta and Costco panko chicken.  Hubs had a more traditional chicken parm with tomato sauce, the boys had buttered noodles, and I mixed in some pesto that I've had stowed away in the freezer for a while. 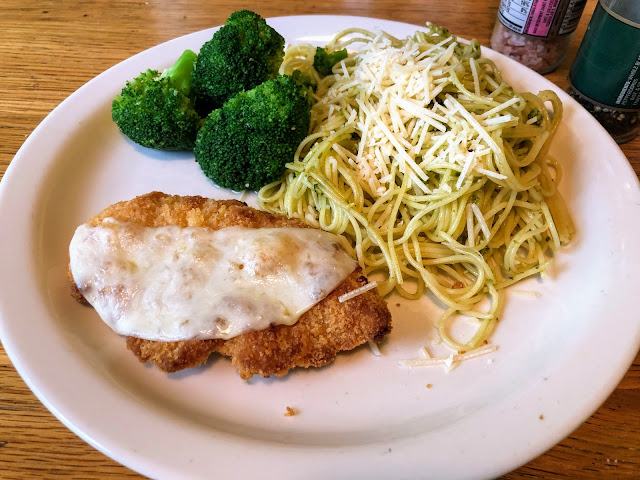 Saturday: I had no clue what I wanted to make and was prepared to just phone it in when the idea of steak kebabs popped into my head.  Done and done. 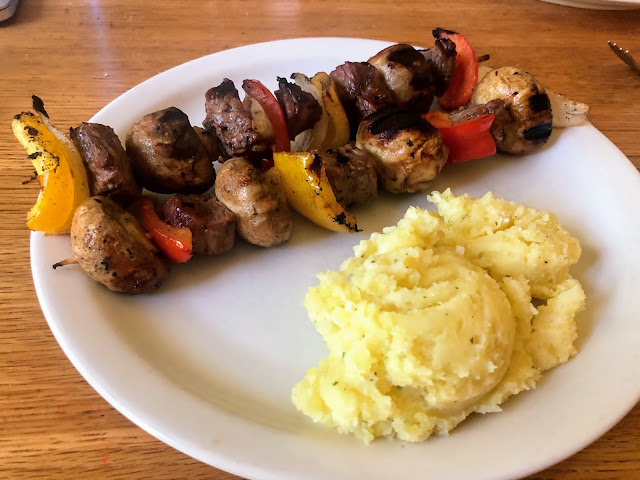 Sunday: I kept my cooking streak going.  I can't say that this is the most exciting picture, but it was exciting food.  I wanted to try The Girl Who Ate Everything One Pan Chicken Fajita Rice but I also wanted the chicken to be separate.  I did what I know and marinated the chicken in our tried and true chicken fajita seasoning.  So if you're looking for something good, good, good, please copy me. 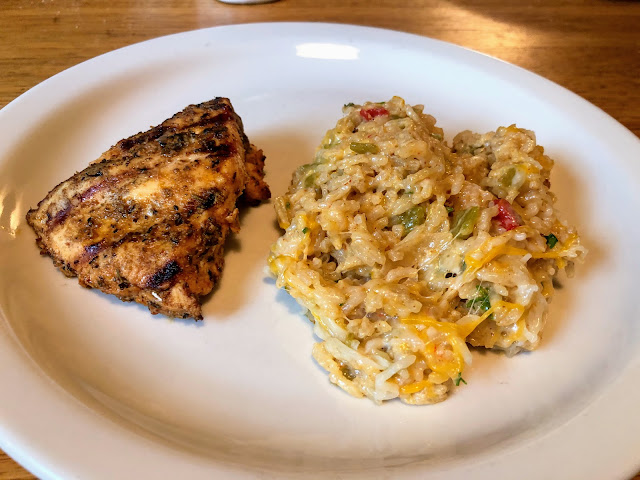 I kinda doubled the rice recipe.  Two cups of rice and nearly 2x of everything else.  For the peppers and onions I used two cups of Trader Joe's fire roasted pepper and onion mix.  I cut back the broth to 2:1 rice ratio.  Guys, this was so good and I'm looking forward to leftovers.

And I'm heading into next week with at least enough steak kebab and chicken leftovers for two meals so ha ha I am finally going into the week with a plan instead of winging it...7 dinners with at least 2 meals of leftovers + takeout night + burger night = 4 meals down and 3 to go.

Watching
Hubs and I went on a noir tangent with this Razorfist's Film Noirchives (heads up that the link is to the YouTube playlist).  That led to us seeing a new-to-us 50's noir film, The Big Combo.  We saw it on Kanopy but it's also on Amazon Prime.  It was a good one, and well, just watch the Razorfist episode on it.  There's no trailer so I'm giving you a random clip from YouTube.

We also saw Best in Show, by the same fine folks who brought you This is Spinal Tap.  If you liked Spinal Tap and you like dogs I think this is a must watch.


For my treadmill run on Saturday my Forbidden Hollywood DVD set caught my eye and I fired up The Divorcee, which is a spicy number from 1930.  Norma Shearer is very pretty and has great clothes, which is enough of a reason to watch any of her movies.  But if you must know the plot it's about a marriage built on total equality.  He cheats and when she finds out, he tells her that it was just a fling and doesn't mean anything so it shouldn't bother her.  She revenge cheats and tells him that it was just a fling that didn't mean anything so it shouldn't bother him.  For some reason he doesn't take the news anywhere near as well as he expected her to.  This is the closest thing I can find to a trailer:


For regular TV watching, I finished Shtisel and now there is a great big void in my life.  And I'm almost done with Mama June from Not to Hot so great emptiness awaits (IMO there is nothing better than having a Great TV Show and alternating it with a trashy reality show).  I feel like I have very high standards on the Great TV Show side and very low standards on the reality side and it's tough to get as perfect a balance as I've had for the past few weeks.

Reading
I needed a palate cleanser so I reread an old favorite, The Package Included Murder by Joyce Porter.  She wrote three series that brilliantly spoofed The All Time Great British Detectives.  I started rereading her books two years ago (hey it is mighty convenient to keep a record of what you're reading on your blog for fun facts like that).

From there I went to Behind Closed Doors and hallelujah I think we have a winner here!  I read a few chapters last night right before bed and I'm looking forward to tucking in to more tonight.

Please tell me what you're eating, watching, and reading!
Posted by Birchwood Pie at 8:08 PM