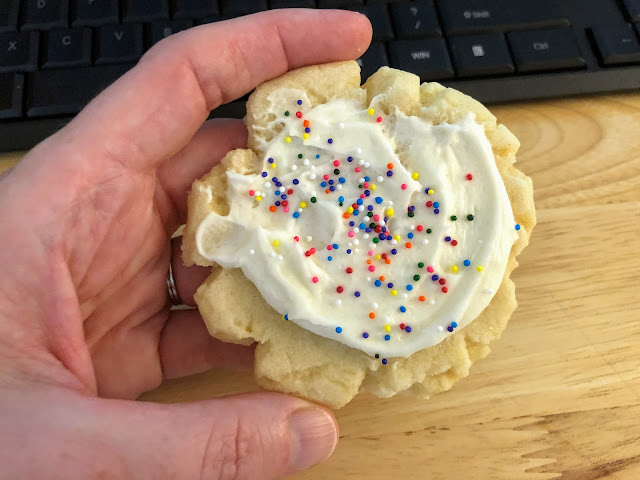 A weekly round up: eats, watches, and reads.  For the first time ever, I skipped my weekly eats post last week.

(1) I wasn't feeling well the weekend before, and wasn't sure if everything was OK or if it was the beginning of something...eh I just didn't feel like talking about it until I knew one way or the other.  Verdict: everything turned out to be fine.
(2) I spent my "blogging time" last week catching up on housecleaning.  Or listening to an incredible audio book depending on your perspective.
(3) Oh wait this is my hobby!  I'm allowed to skip.  But also, hey I really do enjoy rambling about food n'stuff.

Lemme catch you up on All Of The Things.  Food of course, what I spent $12 on recently, then I'll tell you about movies and my prediction for when the first COVID-19 movie will come out, and why an audio book made me clean my house from top to bottom (no it was not Marie Kondo's book).

Let's have dessert first.  My only connection to Utah is being a fan of the Hungry Runner Girl blog, which was the inspiration for making copycat Swig Sugar cookies a while back.  I changed up two things from last time, which was making the cookies smaller and using a different frosting.

I have much more of a "sweet" tooth than a "chocolate" tooth, so these went fast, and not for the usual reason of the two rapidly growing boys in the house.

We had a ton of leftover frosting, so I decided to make some quickie cupcakes "for the boys", I mean since they're chocolate I wasn't going to be tempted... 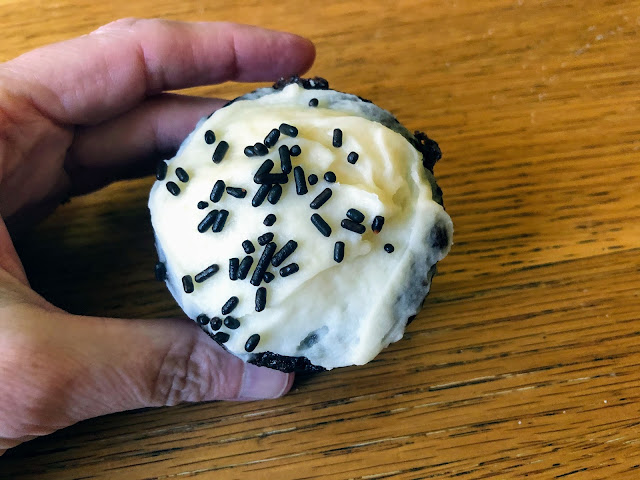 Yeah, that did work out as well as intended.  These cupcakes are excellent and in a way the chocolate just makes the vanilla frosting pop even more.  Luckily the boys are eating them rapidly so I don't have to have too much control for too much longer. 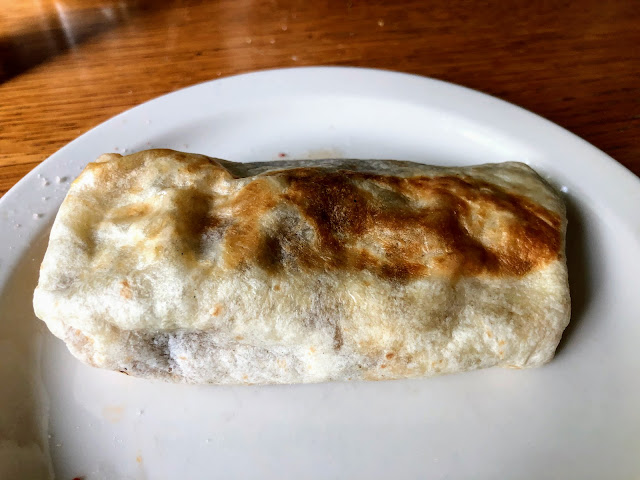 Here's something you haven't seen in a while on the blog!  I used to have breakfast burritos practically every morning for years and years, and only recently stopped in favor of more "carby" breakfasts like Cliff bars and English muffins since I eat before I work out these days.  I found a random mystery burrito in the freezer that I had for lunch one day.  I also did a big ol' cookoff and made an enormous batch of veggie burritos with Pinch of Yum's tofu sofritas so I'm set for All Things Taco for awhile. 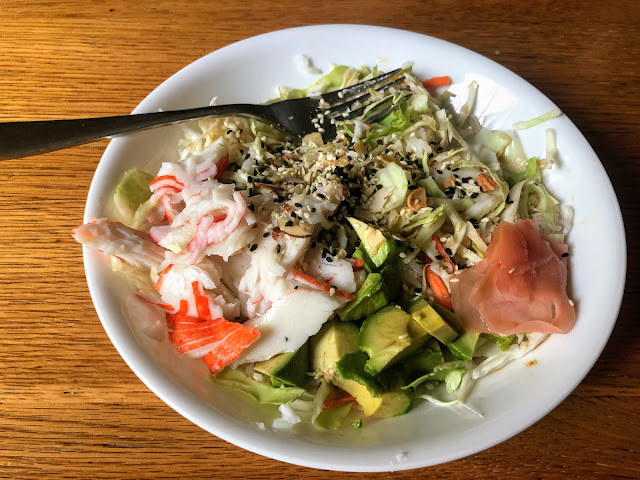 I also went through a spell of "inspired by Budget Bytes" sushi bowls.  That's rice, coleslaw mix, imitation crab, avocado, sushi ginger and sesame seeds.  But something was missing and I just couldn't figure it out.  Oh...I forgot to make the sriracha mayo which is what makes this dish.  A cautionary tale to always read recipes even when the recipe is "put stuff in bowl". 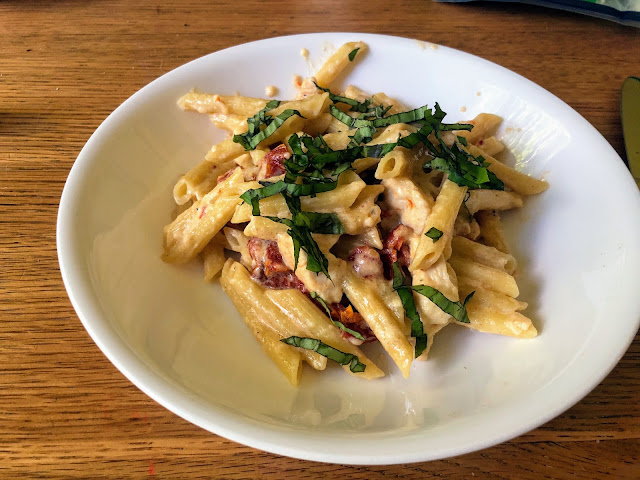 We made another batch of white BBQ chicken.  I didn't have any lemons so I used a lime instead, honestly I think it would also be fine to just increase the apple cider vinegar a bit as a substitution. 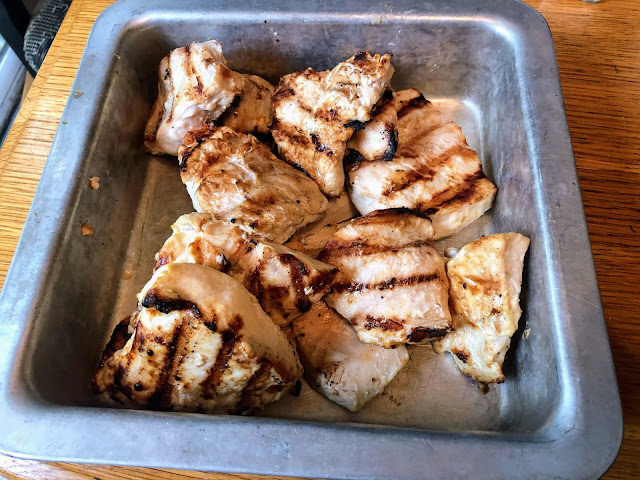 We got in our mandatory takeout and mandatory burger nights. 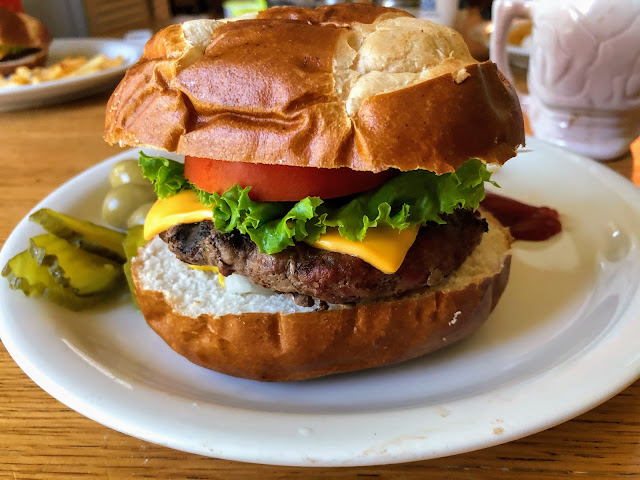 On a night when the boys were with their mother my husband and I let loose and had Budget Bytes' weeknight pasta sauce.  As previously discussed, my stepsons do not understand why anyone would put a tomato/meat based sauce on pasta let alone why the adults in their lives do it so much. 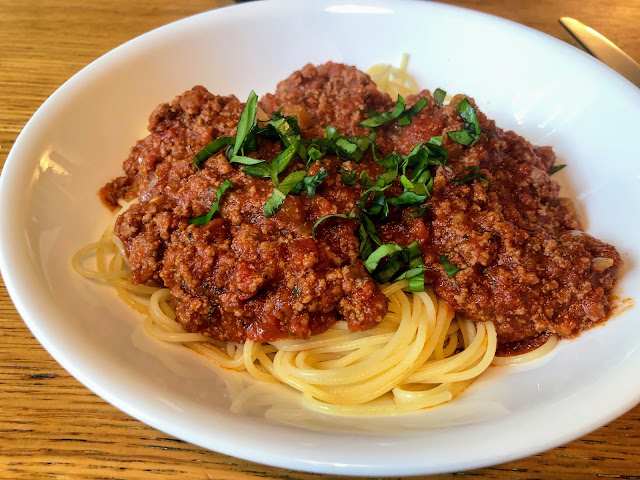 And of course some of our meals looked like this.  Now you're up to date on our food for the past two weeks. 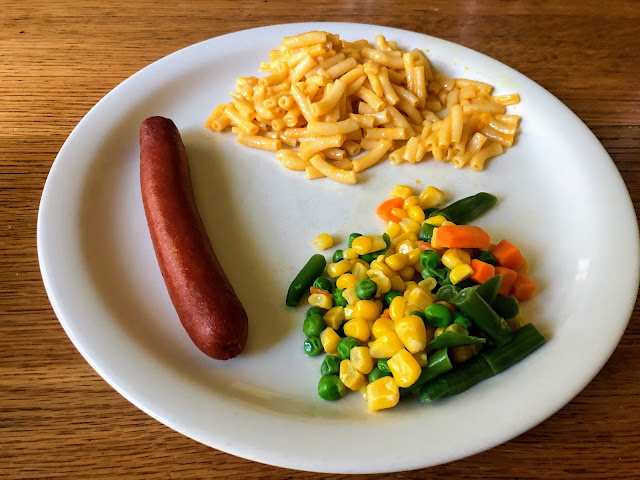 Stuff on the Internet that I Tried IRL
Did you notice the skilled chiffonade of fresh garden basil on our pasta dishes?  Before you give me props for upping my presentation game, I will spill my secret...Jessica wrote about 5 blade herb scissors and I decided to part with $12 of my hard earned cash to check them out. 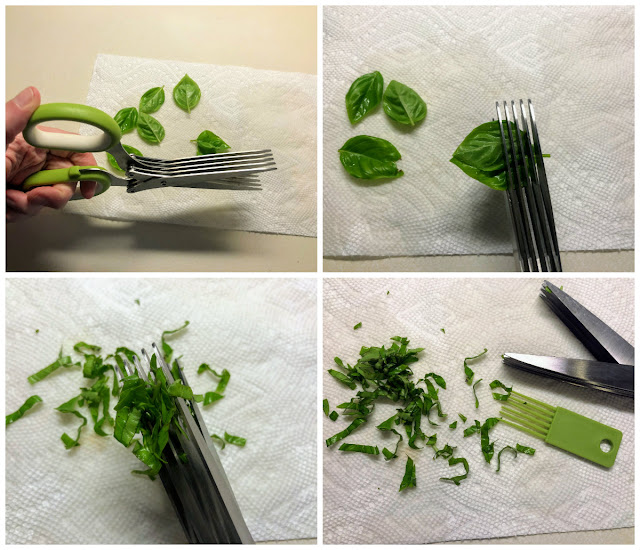 Verdict: I like 'em and I'm looking forward to using them the next time we make cilantro lime rice. I'm not saying that you *should* get them but I also think that if you have $12 burning a hole in your wallet this is a good use of funds.


I had always heard that Taxi Driver was scary and violent, eh not really how I want to spend my limited spare time.  Well hold the phone because that is not correct.  I mean, sure it's suspenseful but nothing that's going to give you nightmares, and violence-wise we're talking way tamer than your average network TV show.  I think maybe it was more upsetting in the 70's?  But nothing else is dated and this is one hella good movie, and man oh man that ending! And that score by Bernard Herrmann! (Who dat?  Get your Alfred Hitchcock movies out.)

There was just one image in Taxi Driver that Greatly Disturbed me, which is the end of the scene where the politician rides in the cab.  He gets out and...shakes the taxi driver's hand!  Yep, I am writing this in 2020.  I can accept that people in 1976 weren't wearing face masks but total strangers touching each other's bare hands freaks me out.

Speaking of masks...look, I believe that COVID-19 is very real and I'm not much of a conspiracy theorist but I was a little suspicious at all of the pictures of people wearing masks from the Spanish flu of 1918 that I've seen popping up on Facebook lately.  As an old movie buff/aficionado of the early 20th Century I just hadn't seen that before.  Wait come to think of it I really didn't know anything about the Spanish flu except as a plot point in historical dramas.  That's a rambling way to say that I saw this documentary and sure enough there were a lot of masks.  I guess if you're a conspiracy theorist you could say that someone was playing the long game by doctoring photos in a 2009 documentary and re-releasing it in 2020.


Also of interest: Fritzi's review of Cupid in Quarantine which I have not seen.  I remember vividly seeing a documentary on war movies once and it was mentioned that right in the aftermath of WWI almost no war movies were made until The Big Parade in 1925 because the subject was just too painful to revisit.  I remember a similar comment when the first 9/11 movie came out, many years after 2001.  So if there were no Spanish Flu movies my prediction is that COVID is going to be scarce on the big screen.


Reading (a.k.a. the reason behind my cleaning spree)
Technically I did not read it, but I experienced A Great Book last week.  My general thing is to read fiction and listen to nonfiction.

I stopped watching the Daily Show sometime in the Jon Stewart era and when I heard that he was leaving it was like "ha, pity the fool who tries to fill those shoes" and that was the extent of my experience with Trevor Noah.  I've literally never seen anything that he's done and I got tired of people saying how great Born a Crime was, sometimes you just have to come to a thing on your own, you know?

So I am here to smack myself upside the head for waiting so long. Born a Crime is by far the best book that I have come across in a long, long time.  This is one where I say DEFINITELY listen to it rather than read it.  I can't imagine the story without his voice.

Back when I worked "outside the home" I had my commute time to listen to audio books and podcasts, but now my listening time is limited to the occasional solo dog walk and housecleaning.  Once I started listening to Born a Crime I simply could not stop, and I'm not going to just sit around and listen, I have to be doing something as well.  That's how I ended up doing some extra cleaning projects and some extra walks to get the book done.  And just...this book is everything.  And my house looked great for a whole 5 minutes after I was done.

Posted by Birchwood Pie at 8:03 PM