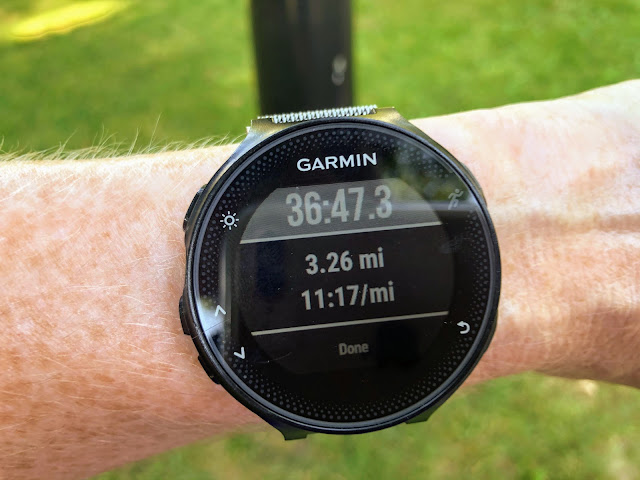 In this week's adventures, I ran 19.75 miles and had some incredible highs and lows along the way.

Monday (low): 4.25 miles and nothing good happened after mile 2.  It was on the warm side but it shouldn't have been too warm and I just couldn't hardly even.  I did 4:1 run/walk to get through it and shrugged it off.  I've been debating on the value of trying to adjust to summer running.  Heat is so stressful and it's not like I'm going to be doing any in person racing, so would it just make sense to spend the toasty days on the treadmill this year?  The counter argument is that where I live "summer running" is May to September and "winter running" is October to April - a.k.a there are weather issues 365 days a year most years and 366 days this year.  Winter has a hard stop for me in terms of safety in that I won't run in the dark or on ice, but summer doesn't have those limitations.  It's nice to get outside, you know?

Tuesday (high): 6 miles total, 4 with friends.  I was a little nervous since it was warmer than the day before and these girls are a bit faster than I am, but I told myself to show up and see how it went.  Of course it was fabulous.  It seemed like one minute later 4 very speedy miles were up, and it was time to say goodbye and run home.

Let's take a random detour for me to tell you about an eye exam that I had back in high school.  The doctor loaded my prescription into the viewer and we fine tuned it to 20/20.  I noticed that if I closed either eye that my view went from crystal clear to a little fuzzy and I asked the doctor why that was.  He replied "the sum of the whole is greater than the sum of the parts" a.k.a both eyes give my brain a sharper picture than either eye by itself.  For some reason that comment has always stuck with me, and I can think of many situations where that's true, not the least of which is group running.

Wednesday (low): FOMO day.  By which I mean it was a planned rest day but I had all the FOMO from seeing "first run of July" posts in IG.  Similar to the FOMO that I had on Global Running Day which was also a rest day.

Thursday (high): 6.25 miles on my own.  1.5 mile warm up, 4 x 400 w/400 recover, and then an extended cool down.  The weather was pretty toasty but having gotten through the group run on Tuesday, I knew that I *could* make it and felt pretty unstoppable.  For the first time ever, I hit sub 9 minute pace on all of my reps (my goal this summer is to run a sub 9 minute mile, this was the first workout where I've gotten the "parts" so that's a good sign for the "whole").  Running fast is intimidating, so my approach for this workout is to set my Garmin to alert me if I'm slower than 9:30 pace and then settle in to be fast enough not to hear a beep but slow enough that I'm still a little bit relaxed.

One thing that I appreciate about my speed workouts is that the park where I do them is about a mile away from home, and it's uphill getting there but downhill coming home, so I always really enjoy my cool down mile;-)  As I was coasting home, it dawned on me that I still had some extra energy to work off, so I detoured up a road that the girls in my group like to run on but that I usually avoid.  Before this week I would have told you that I avoid it because it's a bit of an eye sore and has more traffic, but I didn't realize that it's also one big hill.  Now that I've seen my neighborhood through someone else's eyes, I realized that I've been passing up an opportunity, so I tore into the hill with gusto.

Friday (high): it was a day off work, so we slept in.  It was also super, super hot, way too hot for me to think about running outside.  If I'm struggling so much at 60 degrees, what fool would run at 80 degrees?  But hmm...after the success of Tuesday & Thursday's runs, how could I not at least try?

I took a salt tablet (P.S. Salt Stick, my research into the product is that it was the first thing to come up on Amazon), wore my Mission cooling neck gaiter, and of course I brought my running water bottle, though that's a given for every run this time of year.  I decided to leave the music at home so that I wouldn't be tempted to push myself to "just run for one more song", and vowed that I would not look at my Garmin.  All of those things worked to put me 100% In The Zone.  I found myself annoyed at the heat but not crumpling under it.  Two miles went by in a flash and I started to feel it on the 3rd mile so I pointed my nose in the direction of home and called it at 3.25 miles.

Saturday and Sunday (neither high nor low): I needed a break, so I took it.

Other Things that Happened This Week
What 100% of my runs looked like before (Tuesday's group run):

What my runs are looking like now (Thursday's speed workout):

Heart Rate training isn't something that's been of interest to me before, mostly because all the feedback that I have is that my HR is very high, as in anything over getting out of bed puts me in zone 5.  Now that I've set my gadget around my personal zones (check out Catrina's post to see what I did, it's quite easy). I actually have something else besides a zone 5 so I *could* do something around HR training if I wanted to.  P.S. in this post I said that two things I wasn't interested in pursuing were group runs and HR training and two months later here we are.  Running is like that.
Posted by Birchwood Pie at 2:23 PM