Weekly Sweats: The Whatever Plan 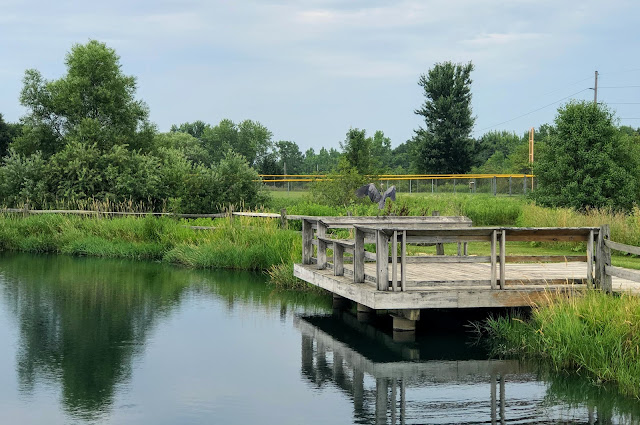 In this week's recap: 27 miles of running, absolutely no weight lifting whatsoever, my fall racing schedule, and my "whatever" plan for training right now.

Monday: 4.25 miles and I made sure to go super easy since it was my 5th consecutive day of running.  I don't regret skipping Sunday's rest day but it did mean skipping strength training this week because my body was pretty taxed out.

Tuesday: group run day!  6.25 miles total, approximately 3 of those were with the group.  And can I just say how nice it was that the temps were in the mid 50's?  I would have gone longer if it hadn't have been day 6 of a running streak and my body was telling me "dude, slow your roll".

Thursday: 6.25 miles, ah let's see that was 1.5 miles warm up, then 4 x 400 & 400 recover, and a 2.75 mile cool down.  It was pretty warm and it's been a few weeks since I've done speed, so I had zero expectations for this on pace or distance.  I ran as fast as I wanted to run and kept going as long as I wanted to.  There is a really small lake on an offshoot of the trail where I do speed work and with a ridiculous amount of zooming in and some squinting you can see my friend the blue heron hanging out.

Also notable for Thursday's run, it was the only outdoor run this week with music.  I don't bring music for group runs and lately when it's been hot I've also been leaving the music at home so that I listen to my body and call the run if I'm getting too hot instead of trying to press through "just one more song".  I'm at a point where I almost prefer running without music.

Friday: another group run.  It was ungodly hot n'humid, ideal weather for me to bonk, but amazingly the crew made it fly by with ease.  3 miles with the group/mile-ish there and back for 5.25 miles total.

Saturday: heat warning + air quality warning = I ain't about to mess with that.  5 treadmill miles which was my longest treadmill run since March.

Sunday: off.  Depending on how tonight's schedule works out I might do a strength workout just to get back on track.

My Training Plan Right Now
Last summer I did a 10 week speed training plan that had me very methodical about each and every single workout.  That was last year and this year I'm in a much more mellow mood.  My summer plans were to drop my mileage as needed for the heat and to do two speed workouts a week.  That plan has been somewhat interrupted by the very unexpected development of group running.  A few weeks ago I met another runner who hooked me up with the neighborhood running group.  There's no regular schedule, it's a big ol' group text of "hey I'm going to the park on Sunday" and "hey is anyone running on Tuesday?" The runs have been 2-4 people and they have been wonderful.

If a group run day falls on a speed day, then I go with the group because (1) pragmatically speaking these are speed workouts since I run faster with others than by myself and (2) everyone that I've met so far has been a Wonderful Human Being and it's a pleasure to hang out.

I ended up with kind of a high mileage week without a long run.  TBD if I start expanding my treadmill distance or if the weather cools down to support longer running, but it's time to start thinking about fall racing.

Race Cancellation Recaps/Fall Racing Schedule
Quick disclaimer that I've been recapping cancellations for humor...like just about everywhere else right now my state is experiencing a COVID-19 surge and I'm in support of getting that curve flat again.  In person racing is kind of low on the priority list right now.

Two races that had previously postponed made their moves this week.
My pre-COVID fall racing plans were to do my Hometown half in late September and then another half six weeks later.  My current COVID race calender is: 5k in early September, which is no problem whatever happens, and then boom-boom-boom: Hometown Half Marathon (already virtual, race window is the last week in Sept-Oct 31st) - the "April==>August==>October Half" - the "April-10-Mile-Race-that-got-moved-to-October" one week later.

My plan is to get in 13.1 mile shape by late September and then see what happens.  The "worst case" is that two 13.1's and one 10 will occur in a 3-4 week time frame, which is a stretch for my fitness level.  If all of these races go virtual then hopefully the race windows will be enough to space them out decently.  If I need to DNS or DNF one of these races, that's fine as well.

Shoutout To
Marcia's Good Posture Workout.  Hee hee, it uses muscles that I don't use very often.  I did it last Sunday and plan to fold it into my workday fitness breaks a few times a week.