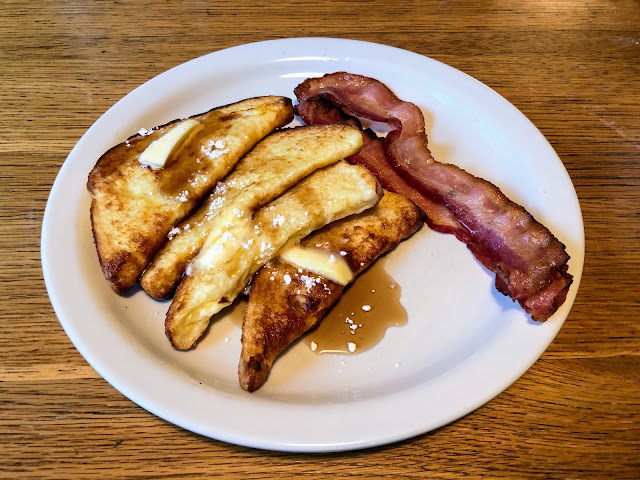 A weekly roundup: eats, watches, and reads.  Guys, this was a Good News week all around.  Something very, very good happened to my husband at work.  The kids are rocking school (it comes easily to one and not so easily to the other).  I managed to feed everyone!  And found a good TV show and some really good books.

The usual mundane Clif bars on weekdays, air fryer French Toast and bacon before my long run on Saturday.

Early in the week I finished the other half of the sweet potato that I'd made last Saturday, chicken sausage and peas. 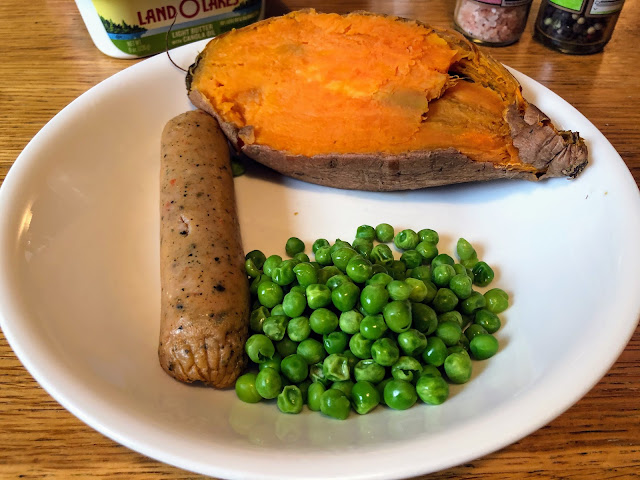 We ended up with a small serving of apple crisp from Sunday, so obviously I had to have that as a lunchtime dessert...you know to free up space in the fridge. 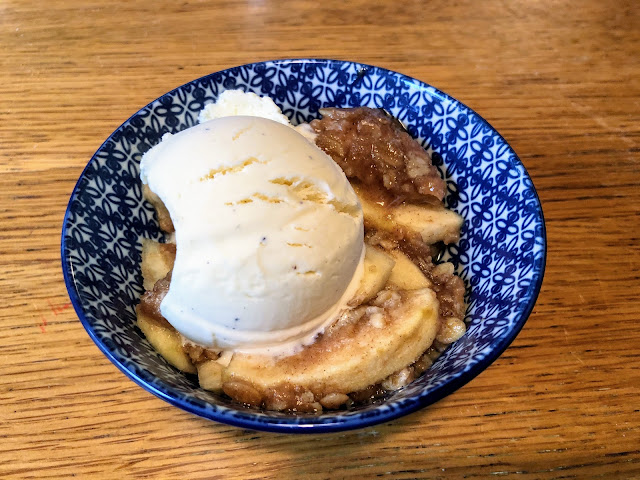 I had veggie burritos on all of the days when lunch was rushed or I was indecisive about what to eat. 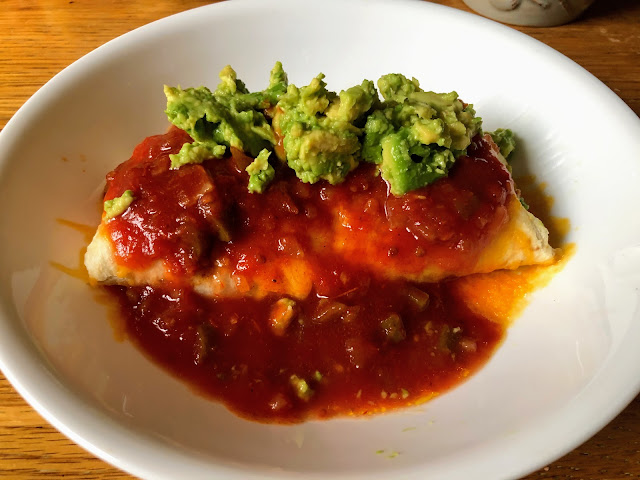 And on Saturday I stopped by the grocery store on the way home from my long run and treated myself to sushi. 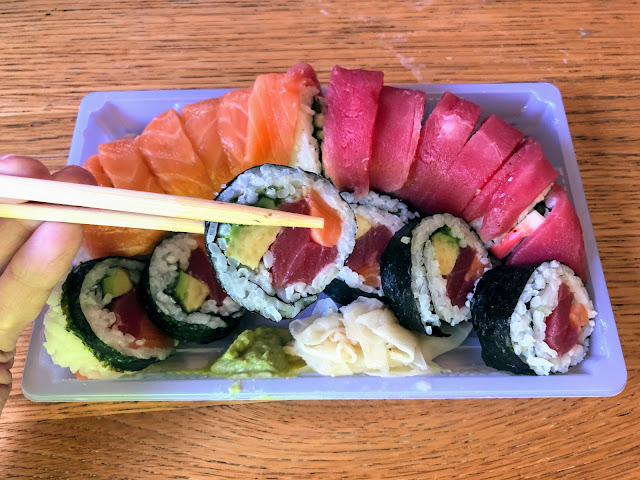 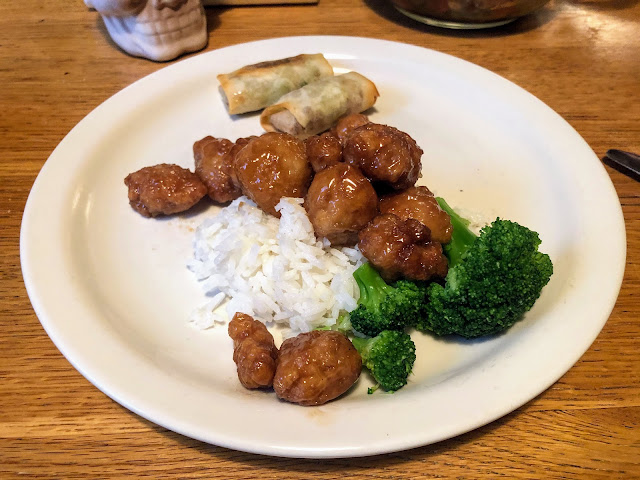 Tuesday: my Jedi leftover skills at work.  There was enough Shepherd's Pie from Sunday for three servings and enough orange chicken for one serving = dinner for a family of four. 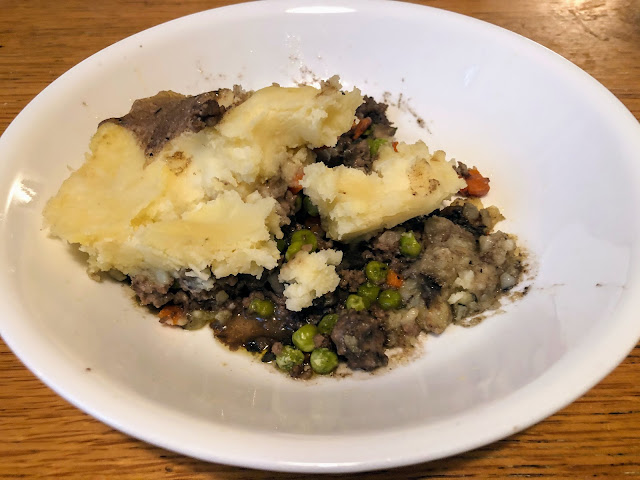 Wednesday: report cards came out...you can guess the results by the fact that we had Chipotle for dinner! 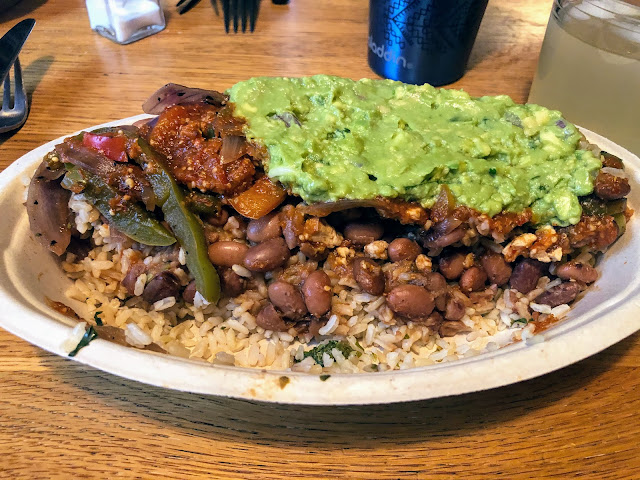 Thursday: I'd thawed a portion of spinach artichoke pasta for lunch but had a burrito instead because it sounded better at the time.  So for dinner I had my pasta and made everyone else chicken parm (with Costco panko chicken). 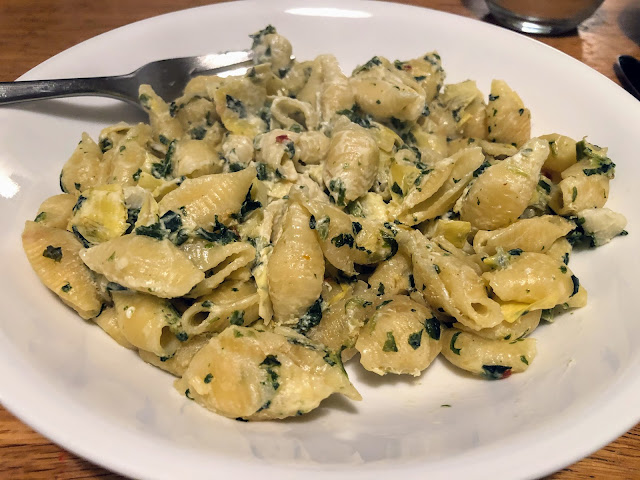 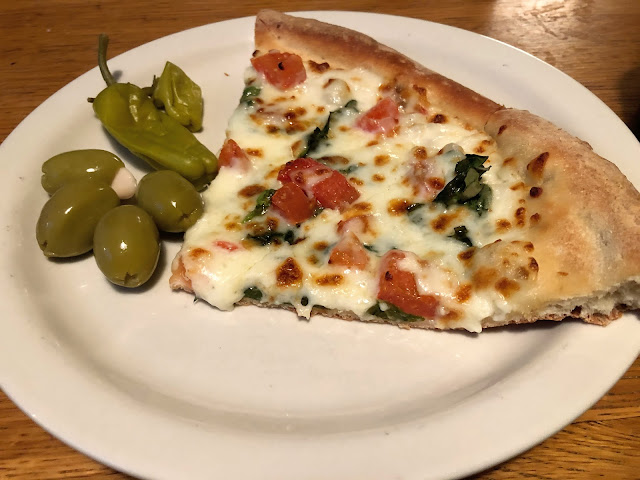 Saturday: burger night!  Followed by trick or treat.  Hubs engineered a candy chute on the front porch.  Stepson #2 has been lukewarm on Halloween for a few years now and sat out on the grounds of officially being Too Old...stepson #1 was All About It.  I'd run 8 miles that morning but I bet he had the higher step count for the day. 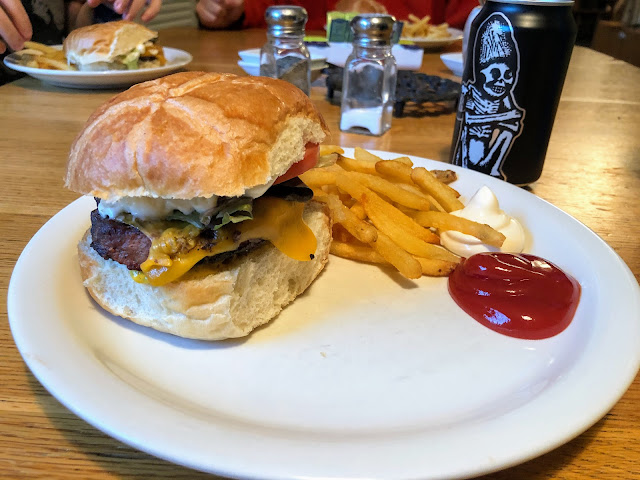 Sunday: sigh, first snowfall of the year.  Just a few flakes, but still it's the principle of the thing.  We snuggled in with some baked ziti (lol, it's actually baked penne, or "baked tubular pasta of your choice") 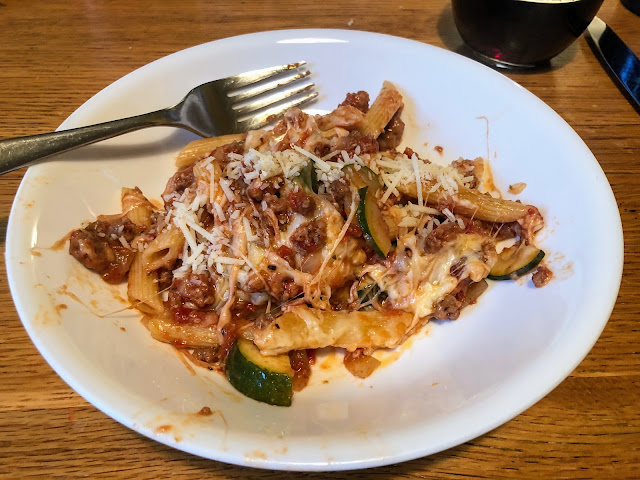 TV has been rough lately...there is no lack of shows out there, but there is a lack of good shows...heck there's even a lack of "not that good but still watchable" shows.  I promise I'm not that picky, I just need my TV to be more entertaining than staring at the wall.

And hallelujah, we're there with The Queen's Gambit.  I'm two episodes in and I'm going to take this one slowly and make it last.

P.S. I wish so much that I'd learned to play chess as a kiddo.  I never did, and stepson #1 taught me the basics a few years ago, but I couldn't figure out how to get beyond basics and it's too low on my list of life priorities.

I have been turning the pages lately.  Or having very good luck getting ebooks from the library on Libby.  First off, I finished The Last House Guest by Megan Miranda, which as I mentioned, started OK, just good enough to keep reading, and then got Very, Very Good.

The Janes by Louisa Luna. With the caveat that some of it was a bit too intense for me so I skimmed those passages.  Legit good book that I could not put down.

Currently reading: The Girl from Widow Hills by Megan Miranda.  Yep same author as The Last House Guest, but without the slow start.  Hella good book so far, my prediction is that next week I'll be calling it out with 🚨🚨🚨

Posted by Birchwood Pie at 7:38 PM