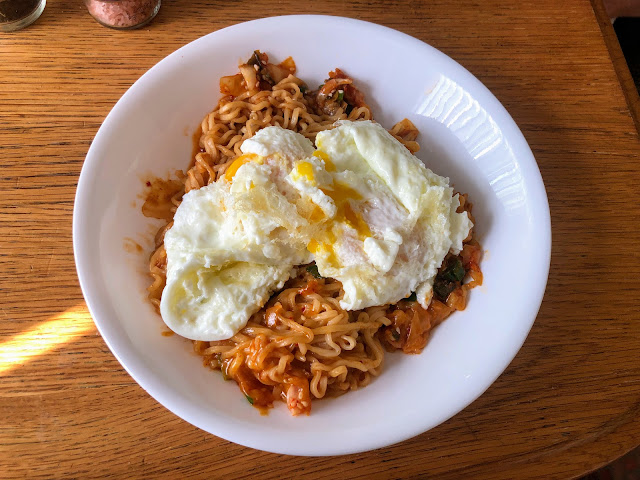 A weekly round up: eats, workouts, watches, and reads.  This week I made fancy ramen and watched another winner on the AFI top 100 list

The most interesting thing that I made last week was NYT's cheesy kimchi noodles a.k.a. fancy ramen.  I like noodles, I like kimchi, I like cheese, and I like things with eggs on top of them so even though I couldn't imagine how all of these great tastes would taste great together, I had to give it a shot.  It was very fast to make and it was pretty good, though not quite good enough to be a repeat for me.  I might make a mild version for the kids someday.

We had lasagna for Sunday dinner, so we're set for food for this coming week. 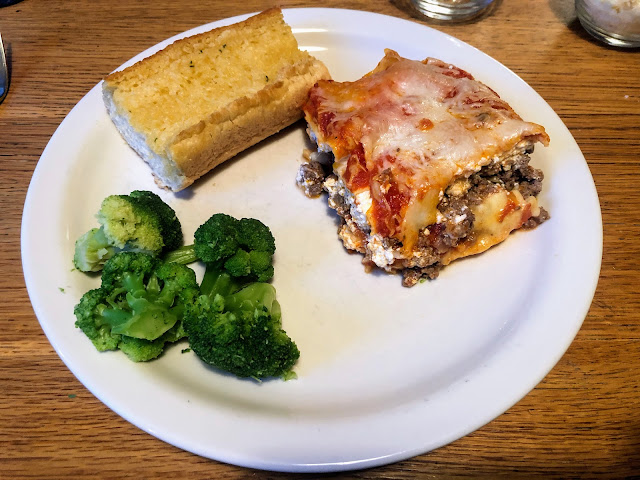 My body is really starting to "snap back" into the groove of treadmill running.  I did 3 miles each day on Monday, Tuesday, and Thursday, and then had a really good 5 miler outside on Friday.  I wonderered how long I could make my long run...

And I needn't have wondered because whomp whomp we had a heat wave on Saturday so my "long run" ended up being in the basement.  I just did 4 miles because I'm still adjusting to running on the treadmill.

At this point it's a foregone conclusion that I'm going to run the half in two weeks instead of dropping to the 10k.  Physically I feel better than I did at this time last month, so it may not be pretty but I'll get to the finish line.

My AFI Top 100 status update is that I've gone from seeing 72 of these movies to 73, so my grade has gone from a C- to a C.  I also rewatched a movie that I'd previously seen that I'd heard the companion Unspooled podcast for.

The new watch was a movie that was previously on my "I haven't seen this but it doesn't leap out as something that I want to see list" and honestly I almost put it on my "I haven't seen it and I never want to list".  It's a war movie, it's has a super crazy production history, I'm not especially fond of Marlon Brando, and I'm not especially fond of the Godfather movies.

Oh yes I'm talking about none other than "the smell of Napalm in the morning" Apocalypse Now.  Same story as last week, I was expecting a craze/violent/boring fest and almost instantly found myself with a movie that I loved.

I have to give two cast shoutouts.  First of all, I did not know that Harrison Ford was in this movie, and he's always a welcome sight.  And whoa Martin Sheen!  My only reference for him is The West Wing, and yes it has to have been 10+ years since I saw the show but my brain struggled to reconcile Captain Willard to President Bartlett.  That is one hella actor.

The next night we saw Hearts of Darkness, which is the "making of" documentary.

I finished my reread of And Then There Were None, which was spectacular.  I think I have my next read picked out.

Link of the Week

Many thanks to Anne for her comment on A Tour of My Great Grandmother's 1910 Fannie Farmer Cookbook.   In response to the food photos that I shared from the book she hooked me up with The Gallery of Regrettable Food.  Oh thank goodness for the internet!