Weekly Round Up: Tales from the Streak 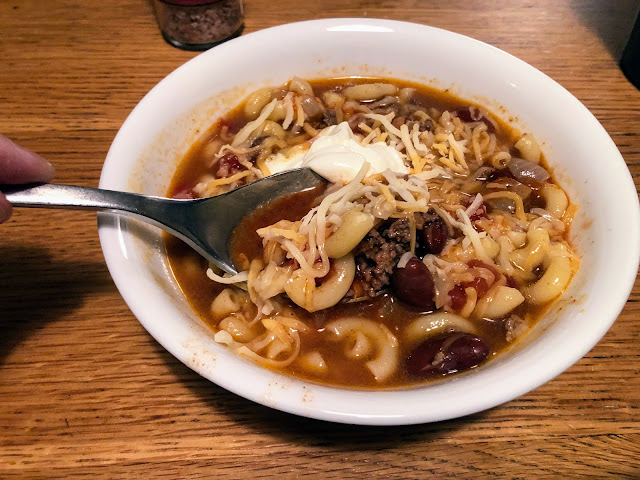 A weekly round up: eats, workouts, watches, and reads.

I don't have anything amazing to report on the food front besides that Sunday was perfect chili mac weather.

Last week I started the Runner's World Run Streak for no other reason that it caught my eye and made me say "huh".  As of last week I'd completed 4 days but I've run 4 days in a row before so that didn't necessarily mean anything.

This week I crossed my previous record of 7 days in a row of running and now each new day is a new record.  All that "the streak" means is that I'm doing my normal volume of running and then running one mile on my normal rest days.  The streak has added a new dimension to my workouts: I have my early morning treadmill days, I have my outdoor days, and I have my one mile days.  I look forward to each of them (yes even the treadmill days) for different reasons.  I read somewhere that one benefit of streaking is that it helps with the most difficult part of running, which is getting started.

Wednesday: one lone mile outside

Thursday: I've come to affectionately think of Thursday as being my "Treadmill Friday" since it's the last day of the week that I start work early and have to run on the treadmill.  Standard issue run with a quarter mile incline at the end.

Friday: outside and on the town.  I started with the idea of 5 miles but then I kept going for six and kept going to round that up to a 10k.

Saturday: I picked one of the hilliest routes that I have available to me from home and put down another 10k for mileage.  It was very tiring AND YET a tiny part of me wanted to go further.

Sunday: one lil' mile, and so far the hilliest mile from my front door that I've found.  My goal is to never do the exact same route twice for my one milers this streak - I believe I have enough unique routes to do it.

Vert wise yes I got more "up" than last week, but I'm going to drop tracking my vert.  I will continue to do the treadmill hill workout, to end most of my treadmill workouts with a few minutes of incline, and to go after the hilly routes but I'm over tracking it already.  Apart from "vert tracking fatigue" I feel like I'm getting a little bit of my running spunk back.

From the treadmill: I got in an AFI top 100 rewatch of It's a Wonderful Life.  My introduction to this movie was way back when it was in the public domain and on TV 24/7, so I think I had a somewhat unfavorable impression of it from the overexposure.  It had been long enough since my last viewing to reset the clock and get a fresh start.  I'm left with the same impression that I got from Mr. Smith Goes to Washington (same director & same lead actor) that this movie has not aged one bit and if anything it is even more relevant now that it was when it was made.  And yes I can confirm Unspooled's observation that James Stewart's toupee comes off when he goes into the pool, though it's brief and from a distance so it's hard to tell.

From the couch: hubs came across The History of Future Folk ("probably the only alien sci fi folk duo action romance comedy movie ever made") which we enjoyed very much.

I haven't been doing a good job with keeping up with recapping Unspooled, but since I last talked about it I've heard the episodes for:

Heartburn by Nora Ephron, which was a title on my "I always meant to read that but just never got around to it" list.  I don't have the words to do this book justice so let me just say OMG and 👍👍👍

Posted by Birchwood Pie at 8:28 PM