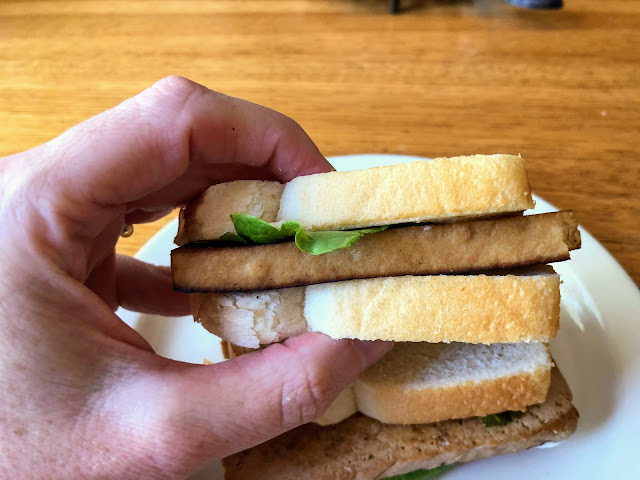 A weekly roundup: eats, workouts, watches, and reads.  In this week's edition my family came home from the wilds, I made vegan spam and I need to talk about it, hubs may have found a solution to our family dinner problem (no, it's not vegan spam), and I ran a one mile race...and a five mile race.

The biggest news item of the week is that everyone is home now!  For the past two weeks hubs and stepson #1 were out in the wilds on an epic Boy Scout hiking trip.  Stepson #2 spent last week with his mom and then spent this week on the staff of a Cub Scout camp, which was a very big deal.  Everyone had a good time and everyone is readjusting to sleeping indoors and having electricity, plumbing, and the internet at their disposal.

During my single girl time this week I mostly ate leftovers and only tried one new recipe.  I wasn't sure how Vegan Spam Musubi would taste, but I felt like I needed to find out.  I don't think that I've had "real" spam since I was a child, but I do have oddly endearing memories of it.  I'm pleased to tell you that vegan spam has an oddly endearing quality as well.

The final product was supposed to be a slice of spam on top of sushi rice wrapped in nori - you'll need to click over to the recipe source for the visual because I did not nail that part of the recipe.  I think the moral of the story is that anytime I try to wrap something in nori I am doomed to failure.  But the spam part of the recipe was a great success.  The only question was what in the world to do with it. 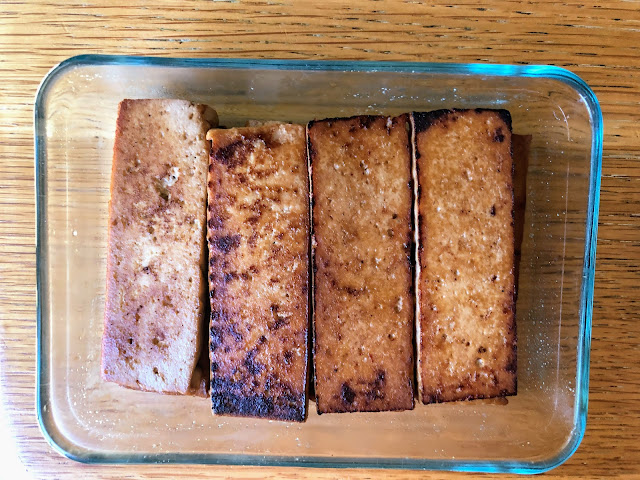 The next day it was lunchtime and I couldn't decide what I wanted to eat.  Out of all of the things that I could have had, I came up with the idea to slap some mayo, lettuce, and relish on bread and make myself a spamwich. 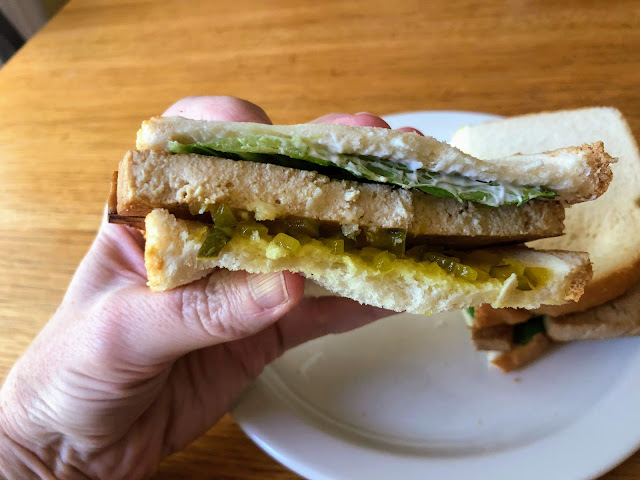 A few lunches later I am now fresh out of vegan spam.  I'm not sure if I'll ever make it again, but I feel like I've had a Life Experience.

The next food topic to discuss is that I am (still) sick to death of cooking family dinner.  I like cooking and I love sitting down with my family for a meal, but over the past few years I've come to loathe the experience of getting food on the table.  Same old same old: I have no frickin clue what these people want to eat, I have no frickin clue what I want to eat, we have to eat dinner very early to get everyone out the door so it's pretty stressful to get work wrapped up and get it done.  At a point when you're banging your head against a brick wall you've got to stop and let someone else have a turn.  I had talked to the hubs about passing the dinner torch once the Boy Scout trip was done, and the wheels are in motion.

The idea is that for the rest of the summer the four of us will rotate dinner responsibilities.  The cook gets to pick dinner, and hubs offered to step up to bat first.  With a dreamy look on his face, he said "I'll make Shipwreck."

On Sunday he set to work.  Shipwreck is a Boy Scout standard, and the way that hubs described it to the boys is "something that you would only eat if you were in a shipwreck." 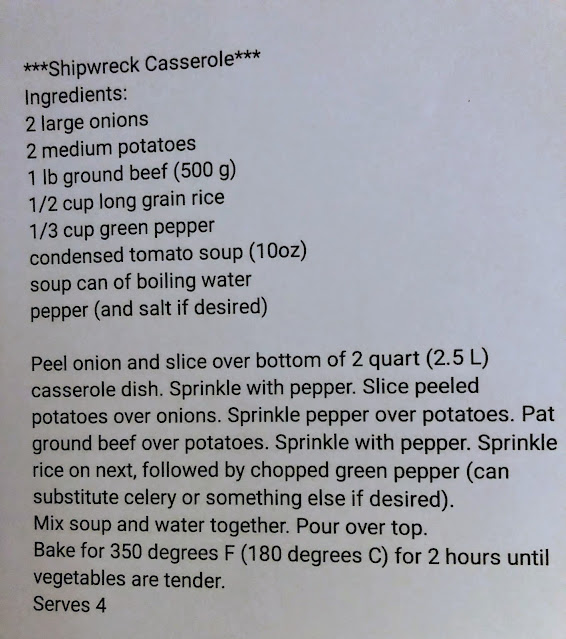 It turns out that shipwreck is quite good and it makes your house smell amazing.  Let's be honest it's not the best looking dish you will ever see, but the taste makes up for it.  So here's an idea for anyone who has no frickin clue what they want to eat for dinner. 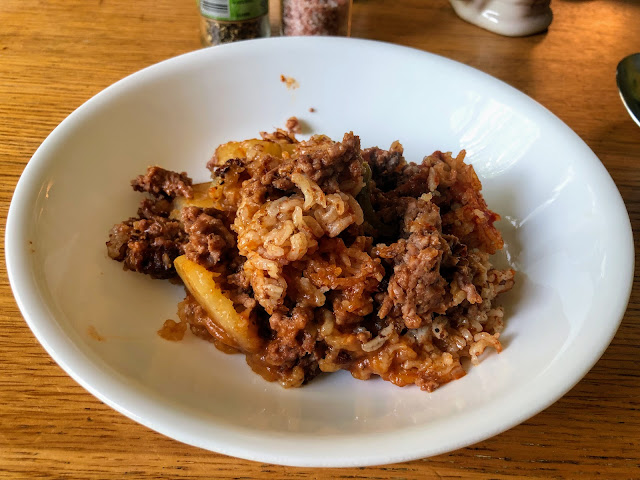 After this strong start I'm curious to see where dinners go from here.

Truth time...the long awaited one mile race was this week.  It was clear a few weeks ago that I would not make my A goal of a sub 9 minute mile, so I adjusted the target to "see what ya got".

Recap of all of my running this week leading up to the race: total crap.

Recap of the race: the race was held on Friday night.  There were about 200 runners, mostly adults but there were a good number of kids as well.  The site was my old grad school campus.  The temp was 86 with an air quality warning, but this was one time when I had no cares about the weather since the race wasn't going to be long enough for it to matter.

The race started on an uphill and my ears were filled with the sound of my own wheezing.  The sun was blazing down mercilessly and I immediately questioned my life decisions.

And then we turned a corner to a good stretch of downhill right through the center of campus and I got out of my head and into the race.  I wasn't looking at my watch, but there was a father and son duo within earshot and the kid was asking his dad for constant updates so at any given time I knew exactly what the distance was.  After the 0.75 mile mark I got ahead of them and that was when I got a peak at my wrist and saw that I was under a 10 minute pace which gave me the motivation to hold it there.  My watch shows this as my fastest mile since I reset my records every month...it's my fastest mile of the month. 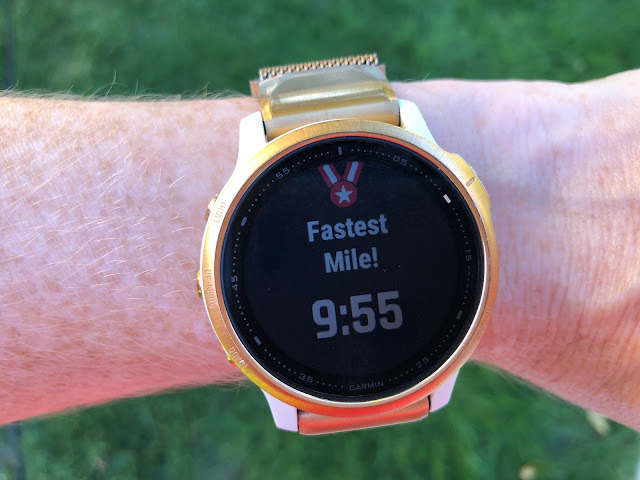 Once I crossed the finish I was overcome by an epic coughing fit which I think was brought on by the air quality situation.  It was rough because I couldn't catch my breath and I also felt like I was going to throw up.  I kept it under control long enough to get my banana and then got out of there.

Twelve hours later I was back on the race scene for an 5 miler.  This time around I very much had a concern with the weather, since it was going to be much longer than a 10 minute effort.  I had a 17 ounce hand held bottle, and my A goal for the race was to drink all of the water before I crossed the finish line.

The race was downtown which helped a lot with the weather, since the tall buildings made for a lot of shade.  The air quality warning was still in effect (I have no idea what if anything that means for running but since it was a thing I'm claiming it for my handicap) but overall things were much better than I would have expected.  I held up pretty strong for the first 3 miles before I had to start taking walk breaks to manage the heat.  It was no world record but I'll take it. 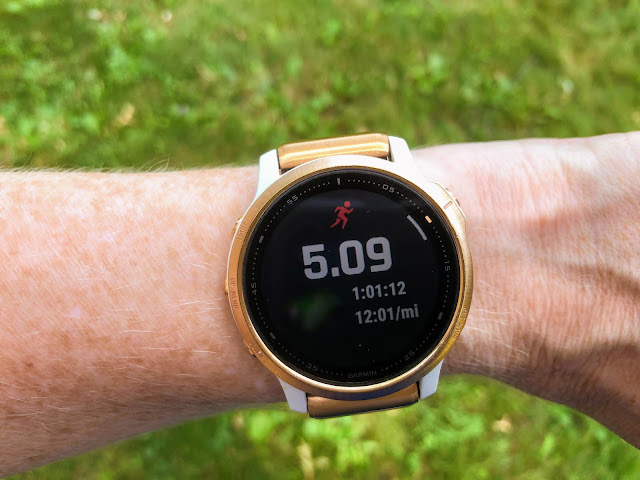 Where do we go from here?  Ima keep after the speed work and I want to get in more fast miles.

Posted by Birchwood Pie at 9:48 PM