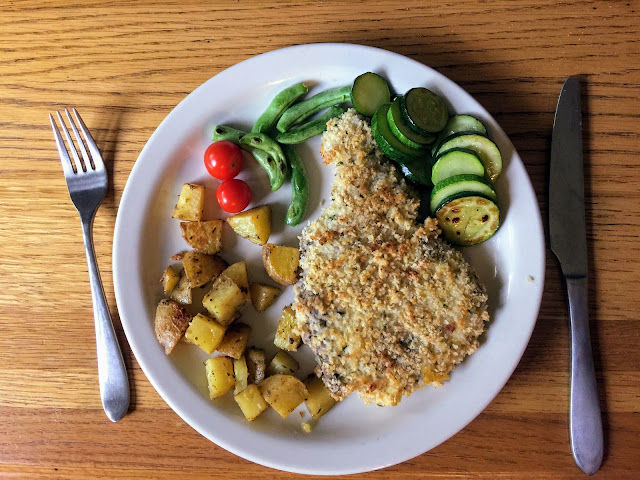 A weekly round up: eats, workouts, watches, and reads.  Sheet pan dinner edition.

This week's adventures include: completely falling off the diet band wagon and an awesome sheet pan dinner.

Right now adventures include: we're on vacation!  We're somewhere on a beach and the stepsons had their first plane ride.  Hubs and I were a little nervous about how they would deal with the airport experience and flying but we needn't have been.  Stepson #2 had to get his hands swabbed in security because of chemicals from playing with a heat pack in our first aid kit at home (don't ask), the flight had some turbulent moments, we had to stay up in the air for an extra hour due to a storm delay, and had a baggage delay after that.  The kids took to it like pros and loved every single minute of it.

And there were a lot of rainbows this week. 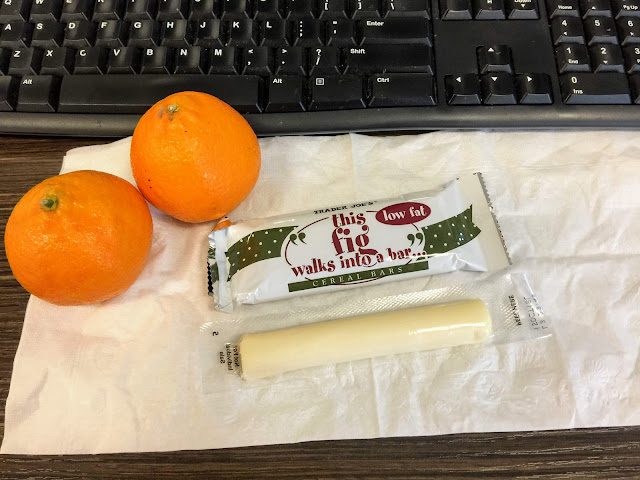 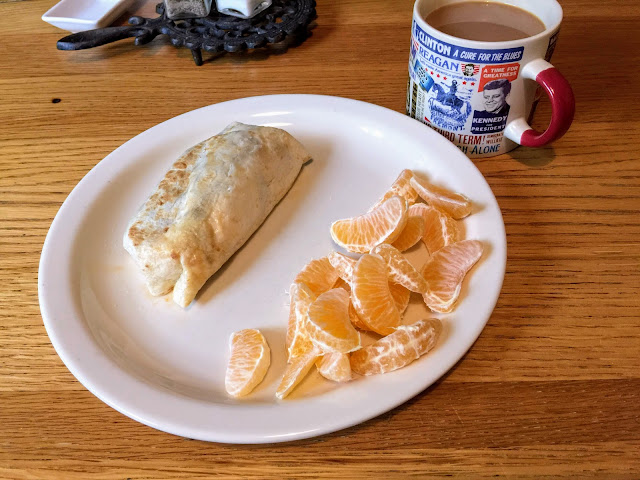 And the thing that happens once in a never.  On my workout rest day, I forgot to eat breakfast.  It dawned on me just as I got to work and was trying to figure out why I felt so cranky.  By happy coincidence, they were serving breakfast at work that day. 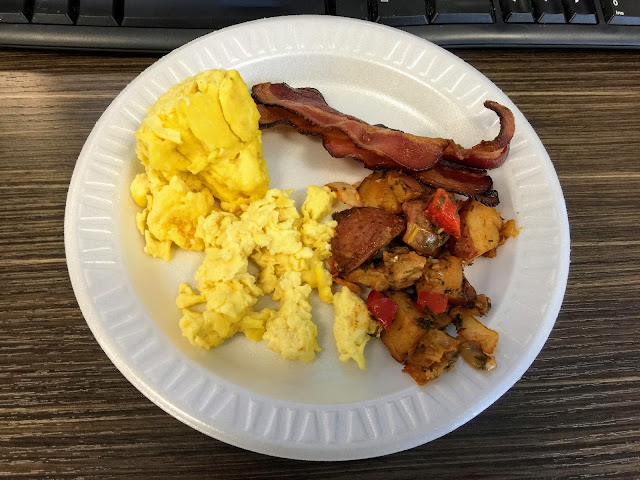 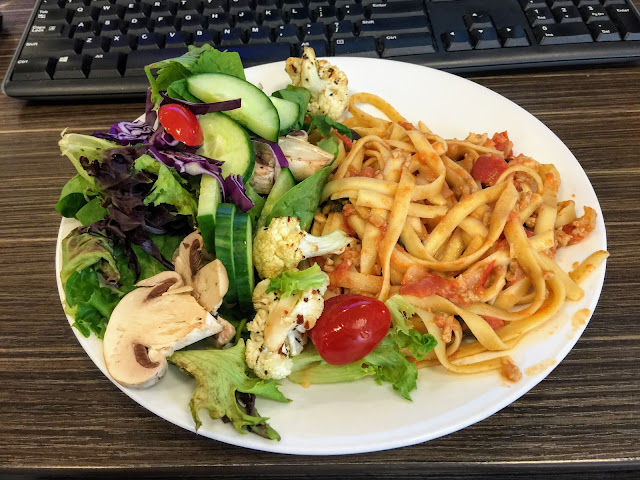 Tuesday & Thursday: Salads.  But don't let that fool you.  I snapped on my diet (work deadlines plus frustration with the scale plus a night out).  Lots of snacking. 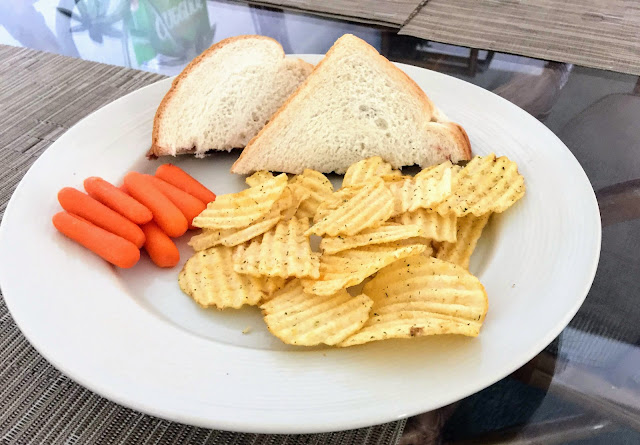 Weekday Dinners
Monday (family meal for everyone but me): grrr, late meeting with West Coast coworkers.  Dear West Coast: East Coast folks are very sorry that we sometimes call you at 5AM because it's 8AM our time.  You've made your point with the post-5PM-our-time meetings.  I'm told that my family had leftover chicken souvlaki from Sunday.  I had snacks and a late night.

Tuesday (family meal): the last of the leftover souvlaki 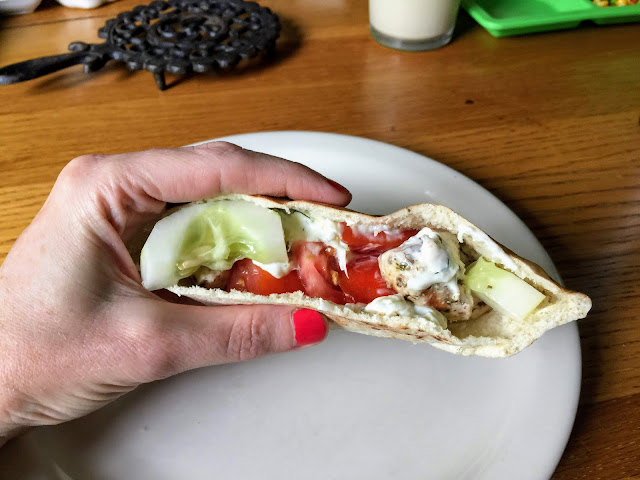 Wednesday (plan and then give up your plans for the dinner that you were meant to have): it was date night but work had been insane and I was stumped on what to cook.  Life happens and there's no shame in going out or getting Chipotle, but I wanted to do better than that.  I headed over to Pinterest.  Past me had pinned Creme de la Crumb's baked ranch pork chops and present me liked the idea because it was quick and the only thing I needed to buy was pork chops.  I left for work early so that I could stop at the store on the way to buy them.  Just before lunch hubs texted me to that sister-in-law #1 was in town for one night and wanted to meet up with us and sister-in-law #3 at a Hibachi restaurant for dinner.  One of my favorite people + a restaurant I had always wanted to try.  The pork chops stayed in the fridge and hubs and I went out on the town with his sisters.

Thursday (date night #2): go time for the pork chops.  I made half the recipe for the two of us.  Going in, I was skeptical about two things:
Real life findings: 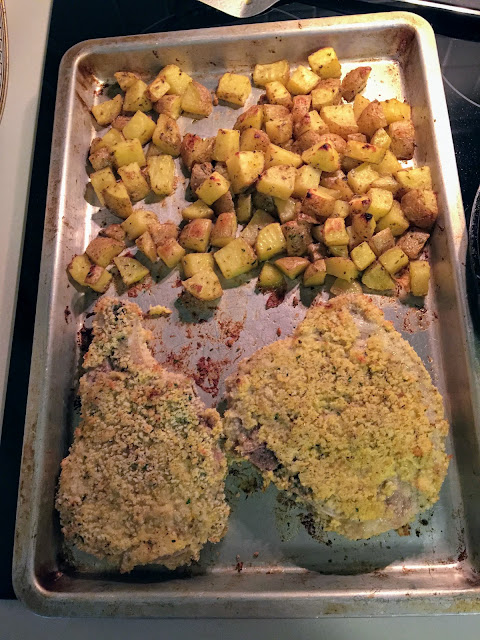 While the chops were cooking, I raided the garden and came away with four cherry tomatoes, a few green beans, and the first zucchini.  So that's why we had a random but good selection on veg on our plates. 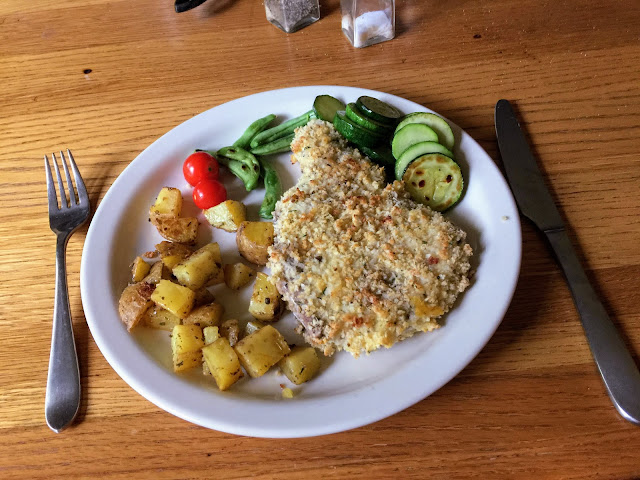 The final verdict?  Two yums up from hubs and me.  We'll be having this again.  We had leftover potatoes which I tossed into the freezer for later.

Friday (family meal): our last at home meal before vacay.  Take out pizza.

Saturday (travel day): delayed at the airport with a long wait for baggage.  A Big Mac eaten on the floor at baggage claim never tasted so good. 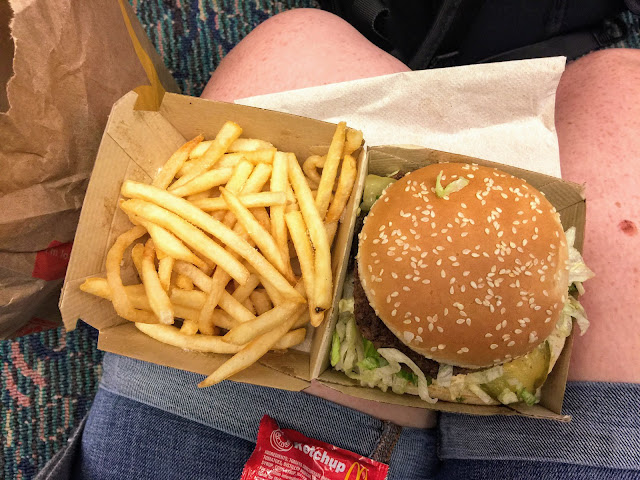 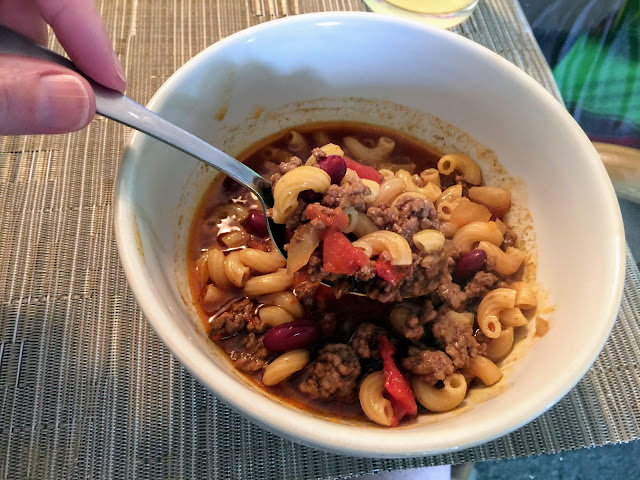 Full disclosure, hubs and I love us some chili mac.  The kids will eat it but it's not on their list of favorite meals.

To deal with our varied taste buds, I make a very mild chili for hubs and kids, and then I spice mine up.  Hubs did the grocery shopping, so I asked him to pick up a bottle of hot sauce.  I didn't specify a brand, I just told him to go for small, cheap, and hot. 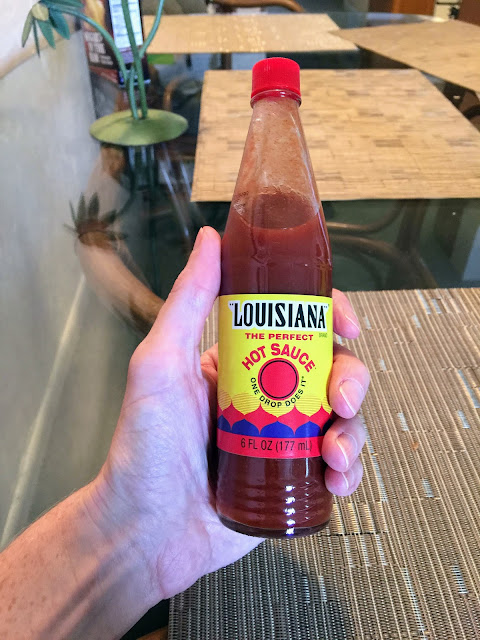 Mr. Mild came through.  I had never had this before but it was perfect in chili.  I can't wait to try it on eggs.

Meal Prep
Ha!  We're on vacation this week.  There's leftover chili mac with an excellent chance of tacos later this week.  We stopped at the grocery store on the way in to get breakfast and lunch staples.  We're trying to sync up with a friend who's in the area so there will probably be a dinner out on our schedule.

Watches
(From the treadmill): How to Get Away with Murder
(From the couch): Halt and Catch Fire

Reads
Oh, we gotta talk.  I started Big Little Lies last week, but set it aside since I have the actual book and I only brought my Kindle for vacay.  From what I've read so far I like it a lot, and I'll have more to say about that when I finish it.

On my Kindle for vacay:
I've already finished Eleanor.   True confession, when this book came out everyone raved about it, and for some reason I made the judgement call that it was over hyped and wanted nothing to do with it.  Boy was I wrong.  I'm only sorry that I didn't start reading this at home where I would have read a chapter or two a night and savored it instead of gobbling it down in two days.  Good, good, good book.

Rainbow Report
Hey, in theory this is a food blog but when I come across three rainbows in one week, they're going to get blogged about.

Rainbow #1: on my Tuesday morning run. 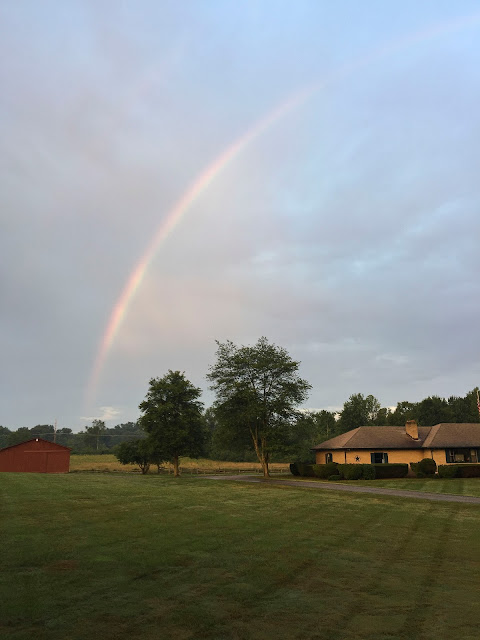 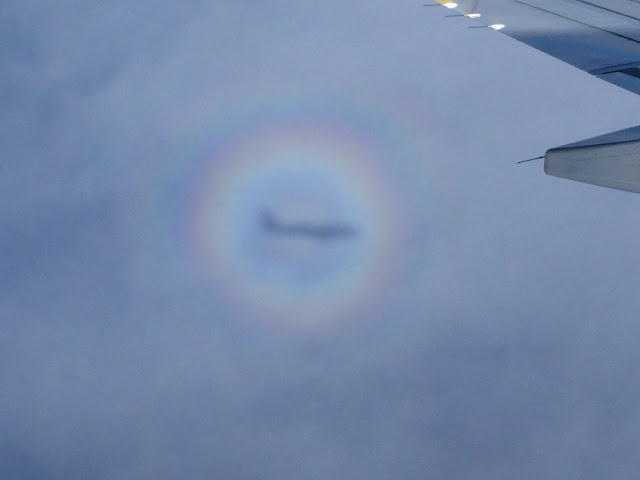 Rainbow #3: Seen when we finally left the airport on Saturday (photo credit: me, hubs was driving) after a storm delay and baggage delay.  And yes, it was a double.  There's a very faint 2nd rainbow above the main rainbow. 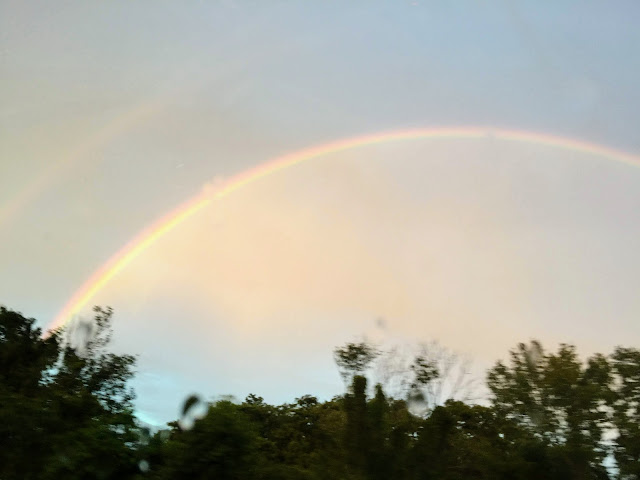 Posted by Birchwood Pie at 8:40 PM