What it's like to use Google Fi on an iphone 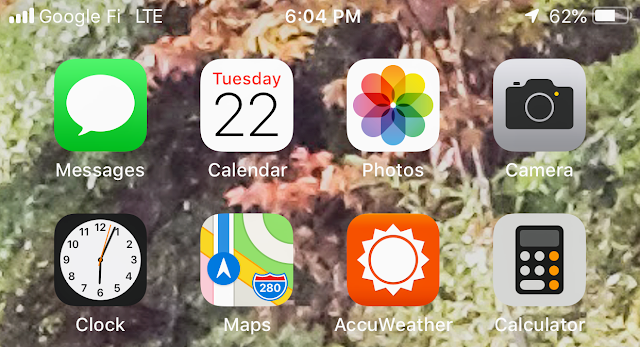 
The Long Version
If you’re not familiar, Google Fi is Google’s cellplan.  It’s been around for a few years and uses T Mobile, Sprint, and other a few other carriers.  The perks:
·      Detects and automatically switches to the best available network.
·      Seeks to use wifi whenever possible and connects automatically.
·      Cheap!  $20 a month for unlimited calling/SMS, data is $10 per GB.
My husband was a fairly early adopter of Google Fi, so you might be surprised to learn that I only recently came on board.  Why? Because in the past Google Fi was only available on certain Android phones, and I’m team iphone.

All of that changed on November 28, 2018, when Google Fi announced that iphones were welcome…AND they were offering a $200 service credit to anyone who switched that day.  My office buddy who's also team iphone tipped me off to the deal and we both signed up on the spot.

Just so you know, I’m no stranger to cheap cell service.  Back in the pre-smart phone era, I paid a whopping $5 a month for Virgin Mobile.  Later on I treated myself to a $200 Android phone and Virgin’s $25 a month unlimited data plan.  The service was…OK.  Meaning perfectly fine outdoors and at home, but in many buildings I would lose signal.

When my first Android phone died, I had the option to join my company’s Verizon plan for $0 in personal cost.  I got another $200 ‘droid and went for it.  Now I know that this is a controversial thing to say, but I love Verizon.  I was the plan administrator for my company, and anytime that I had to call them, they were GREAT.  Yes cell service varies greatly by area, but in my corner of the world they have the strongest coverage.  When I left that company and had to start paying my own cell bill again, I stayed with Verizon.  My first plan with them was just over $70 a month for 2 GB of data.  Later through wheeling and dealing and my current company’s employee discount, I was able to get that down to $57 a month.  Not too shabby.  Every once in a while I thought about going back to a cheapie plan, but prices had gone up.  Virgin is now $35 a month but they don’t let you bring your own phone, so the cost of getting a new phone and switching to poorer coverage wasn't attractive.  I didn’t see anything else with other carriers that made me want to leave Verizon.

Until now.  Google Fi was offering cheap service with my existing phone and giving me $200 to try it.  Plus, I had my husband’s two year track record with Fi to fall back on…sure he’d had some anomalies here and there but for the most part his service was as good as mine.  So…sold!  Even with the fine print that iphone service is still in Beta mode and that automatic network switching and wifi calling wasn’t available.

1.     The switch was easy.  They send you a (free) kit when you order with a SIM card and instructions.  I had to google how to change the SIM card but the instructions were so easy that anyone can do it.
2.     My number was ported over to Google almost instantly, no contact with Verizon required to close my account (this has been my experience every time I’ve switched carriers).
3.     But something went wrong: all of my calls went directly to voicemail.  I had to contact Google Fi support to get this fixed and it took a day.  The internet reports that other folks have had this issue.  It could be my imagination, but I still feel that a few calls go directly to voice mail.
4.     Voicemail is different.
a.     Different not in a good way: you don’t just press a button on your phone anymore, you have to “call” your voicemail and it’s fairly tedious.
b.     Different in a good way: automatic text transcription of voice mails!  I think 1 out of every 100 VM’s that I get is a legit call that I need to respond to and it saves so much time to just be able to see the text of the message.
5.     The coverage and data speeds are way better than I had with Virgin mobile back in the day.  But there's no getting around it, it's less than I had with Verizon.
6.     Not having wifi calling is a giant step backwards, and there’s no word on when or if wifi calling for iphones will be available.  How much of an inconvenience this is depends on the cell service in your area.  For me personally, the service is fine at home and outside, but the building I work in is a giant cell dead zone.  Once Verizon rolled out wifi calling, the dead zone didn’t matter.  Now that I’m on a carrier without wifi calling, it’s a problem again.  It's not very unusual to see this on my phone: 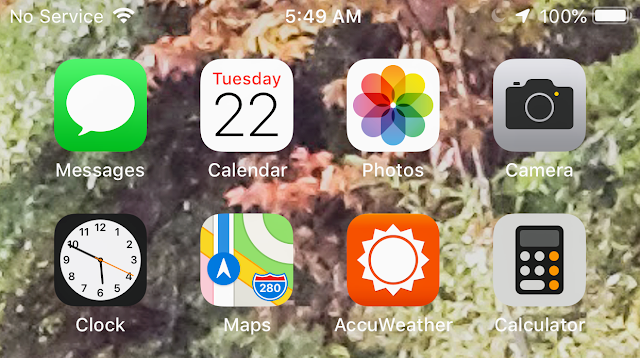 7.     The bill is schweeeet!  I always assumed that $10 per GB meant that I would pay a minimum of $10 for data each month…but that’s not the case.  I’m only charged for the teeny tiny amount of data that I actually use. 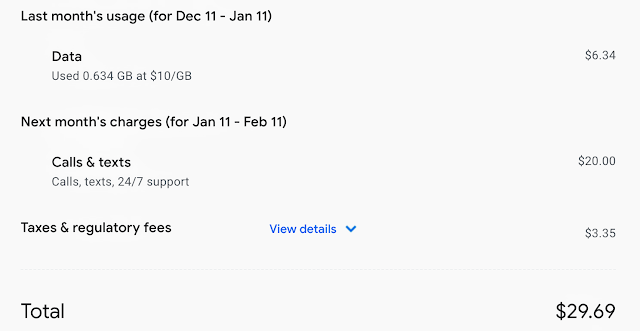 P.S. Fi did give me the $200 credit, but it didn't get applied to my February bill.  They gave me another $20 to make up for it on their own accord.

The bottom line
Because of #3 and #6, I can’t wholeheartedly recommend Google Fi for an iphone.  If I worked in sales for example, the iffiness of getting calls would be a deal breaker.  If I had children, I’d probably want a more reliable means of people being able to reach me during the day (as it is my husband and parents know to call my work landline if it’s an emergency and I don’t answer my cell and I think it’s unlikely that my stepsons wouldn’t be able to reach their parents in an emergency and have to fall back on me…but you do have to think stuff like this out).  If Fi just had wifi calling for iphones I would be behind them 10,000%.  That's the only feature that's missing.

If you’re team ‘droid and have a Fi supported phone, I think it’s a different story.  I say go for it!  Or if you're on an iphone with Virgin or one of the other carriers that Fi uses or otherwise unhappy with your current carrier's service, your service on Fi will most likely be the same but cheaper, so switching is a win for you.

TBD if I will stay with Fi…on the one hand it seems like I could miss out on an important call someday.  On the other hand iphones won't be in Beta mode forever.  And on the final hand once you start paying less than $30 for your cell it seems outrageous to go back to paying $57.

Posted by Birchwood Pie at 8:31 PM