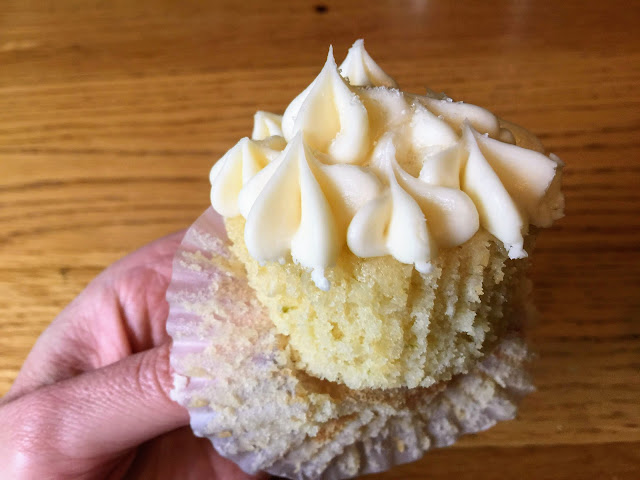 A weekly roundup: eats, workouts, watches, and reads.  Warning: this one is going to be all over the place, because I have amazing food things to tell you about, such as making chicken parmesan in the air fryer, margarita cupcakes, cookie cakes, and ice cream cakes and I also have an amazing running thing to tell you about, such as a 'lil 30 second 5k PR.  So fasten your seat belts and we'll get started... 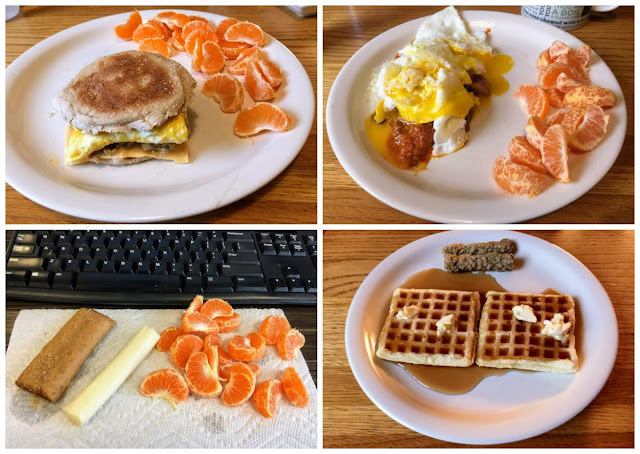 Monday: homemade Egg McMuffin with chicken sausage
Tuesday, Wednesday, and Thursday: eggs and breakfast potatoes with Trader Joe's pepita salsa.
Friday: cereal bar, string cheese, and fruit.
Saturday: pre race waffles (from the freezer via hubs) and chicken sausage.  It was an early breakfast but not a lonely one.  We had a houseful of kids for a sleepover, and stepson #2, who is normally the king of sleeping in, woke up early (wait, the more I think of it, he probably never went to sleep to in the first place...) and joined me for cereal.  It was a lovely way to start a lovely day.
Sunday: um, a piece of pizza and a cupcake, followed by a long walk with stepdog. 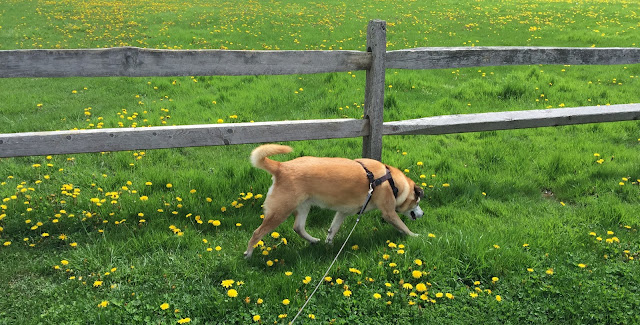 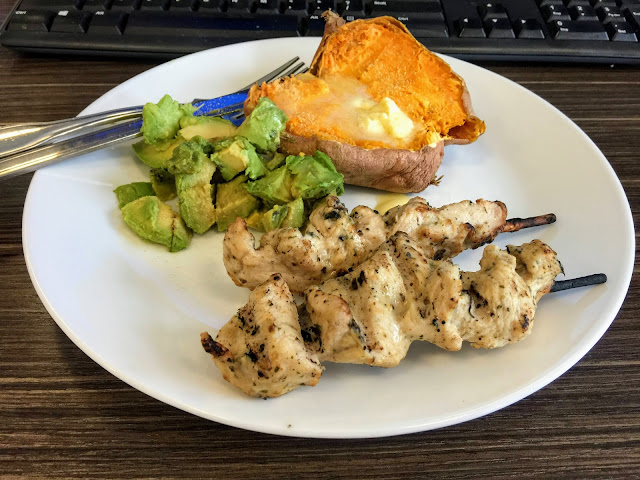 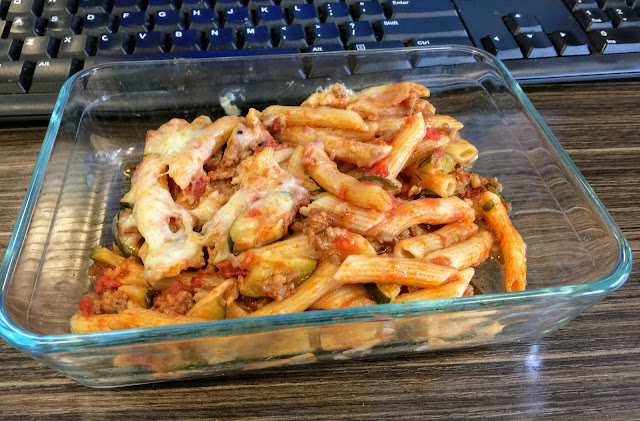 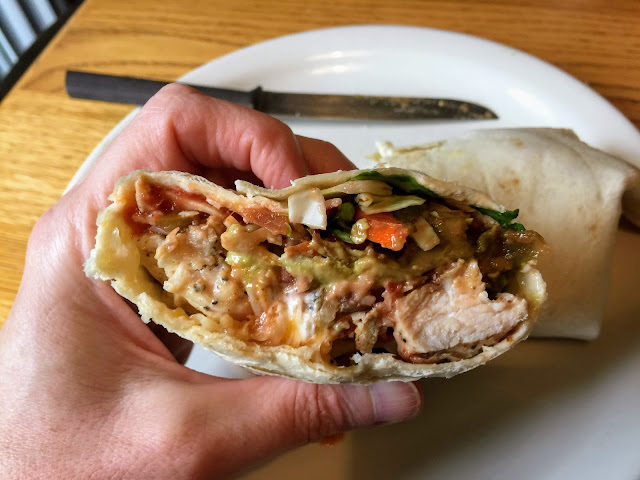 Sunday: pizza, coleslaw, and a few Doritos.  I reheated the pizza in the air fryer and am sorry to say that it's overrated IMO.  It has a very thin edge over just nuking it in the microwave.  Skillet reheating is the way to go. 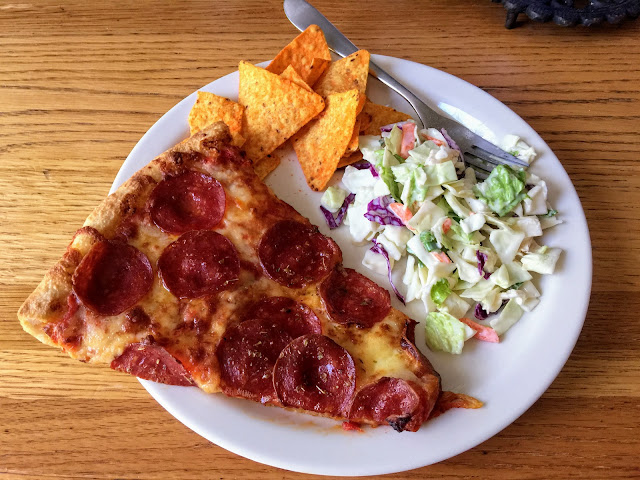 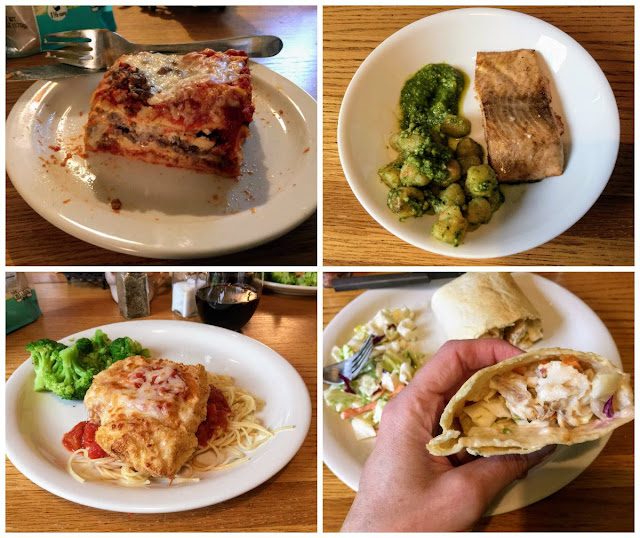 Tuesday (family meal except I got home late and waited until after our nightly dog walk to have dinner): Ideally I would like to have fish twice a week, and if you've been reading along, you know that's happened about once in the last year and a half.  Now with the air fryer, eating fish is no longer a chore.  Air fried salmon + cauliflower gnocchi (thanks Tina!  this was why I got an airfryer in the first place) with a scoop of Costco's pesto...and OMG y'all Costco slays with their pesto.  Yet another staple where my loyalty has transferred from Trader Joe's to Costco.

Wednesday (date night): super busy day at work, and I almost scraped my plans to make air fryer chicken parm because I was late home and the day was so hectic.  Once again, I relearned the lesson that chicken parm is the world's fastest/easiest/least stressful dinner to make (plus it's hubs's favorite).  And the air fryer is so much faster than my hybrid panfried/ovenbaked method of the past.  I used my recipe but turned to Skinny Taste for the air frying technique.

I had quite the dilemma, since Thursday is my dedicated house cleaning/laundry night BUT I also wanted to make some desserts.  There's no shame in skipping a week of cleaning except that we were having two nights' worth of people over for a certain stepson's birthday...what to do....aha!  Friday night's guests were kids, so I elected to have them over in a dirty house.  Not due to a lack of respect, it's just that kids are kids and they wouldn't have noticed or cared if I'd skipped a year's worth of cleaning.  Saturday the kids picked up the mostly kid mess downstairs and I finished with dusting/vacuuming/kitchen and downstairs bathroom scrub up.  Problem solved.

Dessert project #2: Margarita cupcakes!  It's been forever since I baked anything for work and a pre-Cinco de Mayo celebration was in order.  I got the key lime extract that Sally recommended.  The recipe yielded 16 cupcakes and they were heavenly. 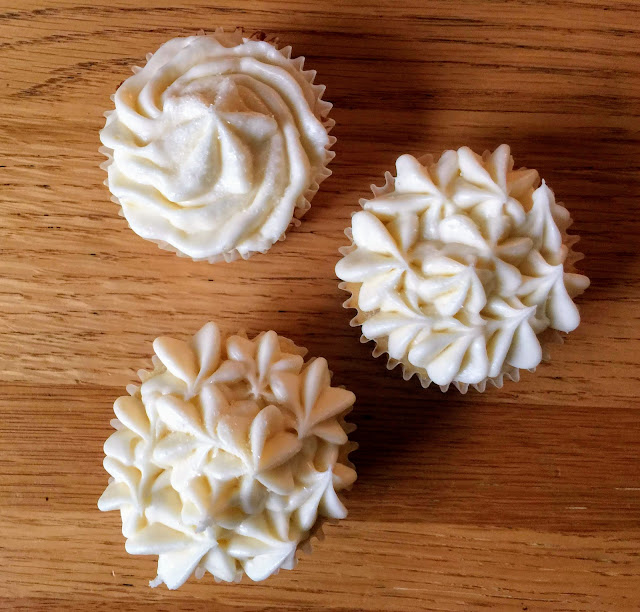 Friday (birthday party #1): Diner was takeout pizza, nothing to see there.  So let's talk dessert.  All along the plan was to make an ice cream cake for the main party on Saturday, but we needed a sumptin sumptin for Friday night.  And as you recall, I was just a bit busy the night before with cupcakes. 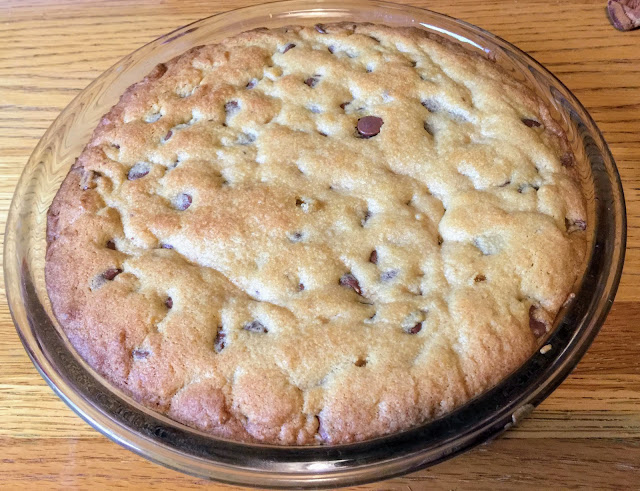 Chocolate chip cookie cake FTW!  This is the chicken parm of desserts.  I spent 5 minutes making the dough and putting it in pan in the morning, and then we baked it while we were having dinner.  The boys loved it.

I've made another blogger's recipe in the past, and there was nothing wrong with it, but I decided to try Sally's Baking Addiction this time and she did not disappoint.  I'm calling this our official cookie cake recipe now.  We only had one egg, so I skipped the extra yolk due to not having it, and since we started the baking process with cold dough, I was expecting a longer cooking time, but it was done right at the 20 minutes.

Saturday (birthday party #2): the official family party.  We got (nicer) takeout pizza, chicken, and jojos.  I threw a salad together (recipe: put two bags of salad mix in our nicest serving dish) and got a bag of Doritos, which I also put in a nice serving dish (because I'm classy like that).  And if y'all haven't had Doritos with red wine, you are missing out.

The birthday boy asked for an ice cream cake, which I started making on Thursday.  There's very little hands on time involved, but the more time you have to freeze each layer = better. 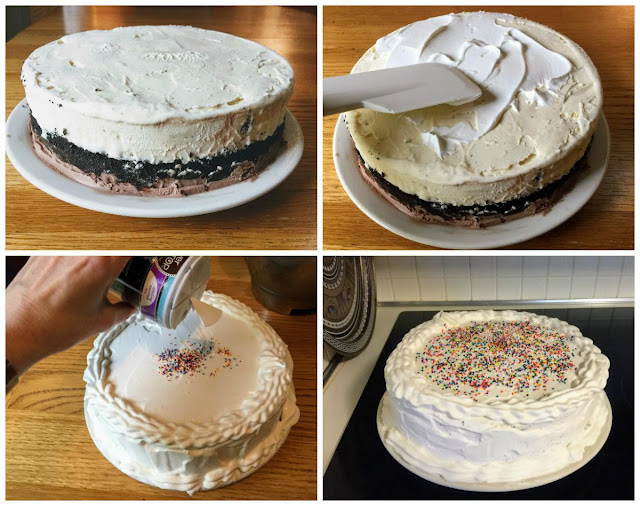 I always end up with more ingredients than pan space, and last year at this time while running a 5k, it occurred to me that I could use the extra ingredients to make two mini cakes (it's true, running leads to some great ideas) in my 4" spring pans, so I also did that.  We call the mini cakes "baby cakes", they are stowed away in the freezer until we finish the big cake and then we'll break them out for weekend desserts.  The boys get a big kick out of them. 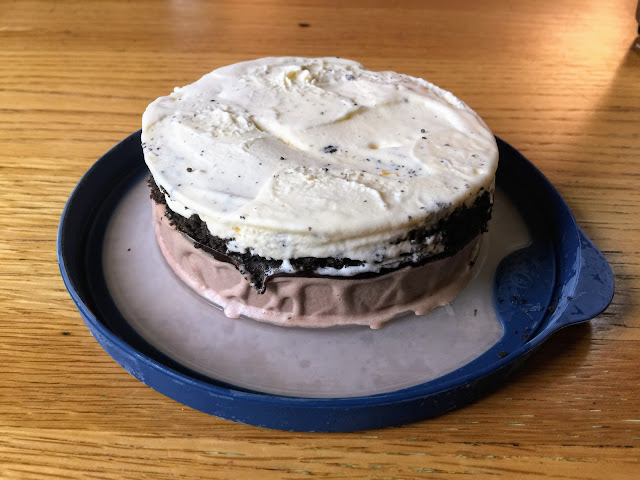 Workouts
The number one thing to tell you about workouts this week is that I was in a such a honeymoon daze from the 10 mile race that I ran last weekend.  The number two thing to tell you is that I knew this week's workouts would be on the struggle bus based on another blogger's description of her workouts the week after a 10 mile race.  16.1 miles total
Monday: no running, weights
Tuesday: 3 mile run with strides.  First mile felt great, second mile started to drag so I made the decision to cut the run short to 3 miles and started doing strides which made me feel great again.
Wednesday: 5 miles of dragging my booty around the neighborhood and calling it a run.  Weights later in the day
(PS if I had it all to do again, I would have skipped the Tues and Wed runs in favor of extra rest).
Thursday: 5 more miles of dragging my booty around the hood and calling it a run, but I had it together enough to add one minute fast/two minute recovery to miles 3 and 4.
Friday: off
Saturday: my favorite 5k! 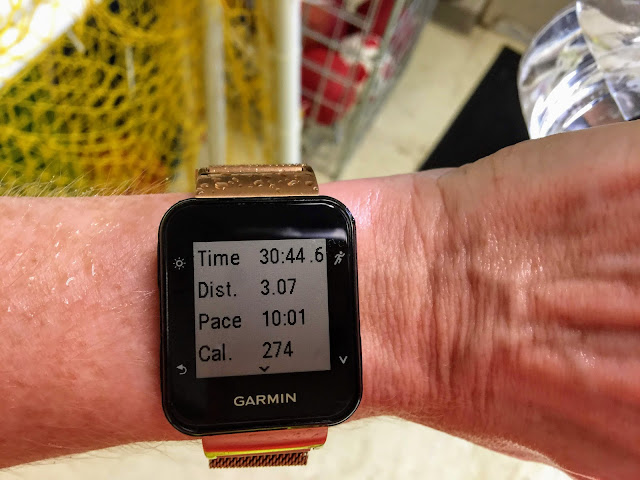 The race benefits a family member's school.  One of the SIL's volunteered, and a couple of the cousins ran the race.  It's in my single girl town on a perfectly flat course.  My history with this race besides that I love it because of the family connection:
2015: 32:15
2016: 31:42
2017: DNS.  It was cold with a fierce rainstorm and that was when we were getting ready to sell my single girl house, so I bailed with no regrets and worked on the house instead.
2018: 31:11 ==> my former 5k PR.

So remember, I''m coming into this race with the expectation of a PR and the thought that maybe this could finally be a sub 30 5k, but also with a tough week of running behind me, so my confidence was not high.  The temp was high 40s and just before the race started, it started to drizzle.  I'm a big fan of running in light rain, so I didn't mind.  You can see how wet my arm and watch band are.

Mile 1: I made sure not to go out too fast.
Mile 2: started to pick it up.  I kept an eye on my pace and also started pairing up with other runners to check myself.  For a while I ran behind two men, and I wonder if they were the same guys that I paced myself with in mile 2 last year.  They started getting a little slow for me, so I buddied up with a woman wearing a pink sweatshirt and she kept me going.
Mile 3: I wanted no regrets, so I kept the pace going.  There were places in that mile where my pace got into the 7's.  I couldn't catch pink sweatshirt, but I gave it everything I had without killing myself.

TMI recap: I heaved a few times after crossing the finish line, but didn't throw up so it was all good. Taking that as I sign that I put the exact right amount of effort into the race.

I didn't plan it this way, but with the 10 miler plus the 5k, I've raced a half marathon's worth of miles in a week.  Next race: yikes, a real half marathon.

Sunday: off from formal exercise, but not a rest day.  We got the garden up and going.

Watching
Nothing except a little Mama June from Not to Hot with my weight workouts.

Reading
Finished Sour Cream with Everything. Next up: The Girls in the Garden by Lisa Jewett.

Posted by Birchwood Pie at 6:26 PM