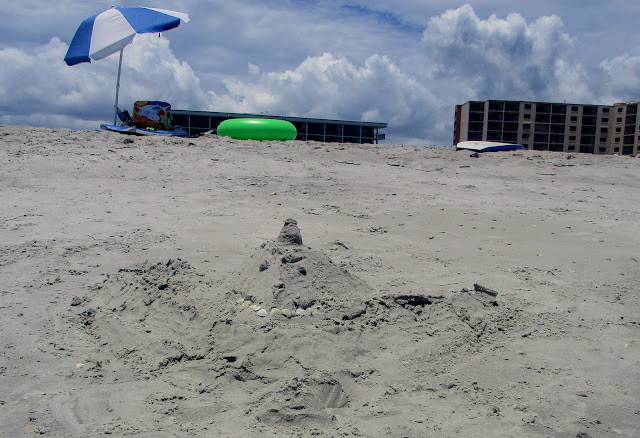 A weekly roundup: eats, workouts, watches, and reads.  Beach Edition.  If there's one thing that I can tell you about my family, it's that we take vacations seriously.  We spent 99% of our waking hours this week in our bathing suits.
The first order of business for our trip was the grocery store.  The stepsons are at a point in their lives where they eat 12/7 (they're asleep for the other 12/7).  Here's what we got to try to keep the hunger pangs at bay:

Dinner stuff: we started with chili mac, then made tacos, and went out with friends one night.

Vacation Breakfasts (a.k.a yummy things to do with naan) 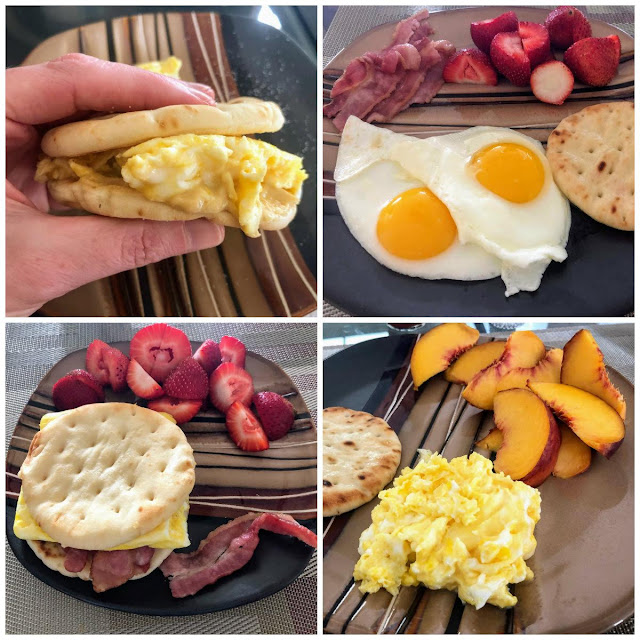 I had quite the vacation fling with naan.  I'd gotten it to go with hummus and wouldn't have thought to try it with breakfast.  The box had a picture of a bacon and egg sandwich which got me inspired.  And that peach tho...it was perfection. 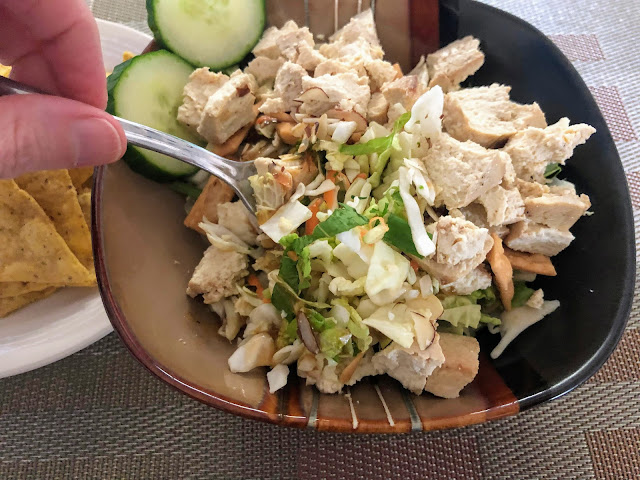 Not a lot to see here.  Salad mixes with sesame ginger tofu.  I'm not trying to hide the potato chips, I assume you know that I'm not going to eat just a salad for lunch.  By the last day I'd run out of salad so had a naan/tofu/hummus sammie. 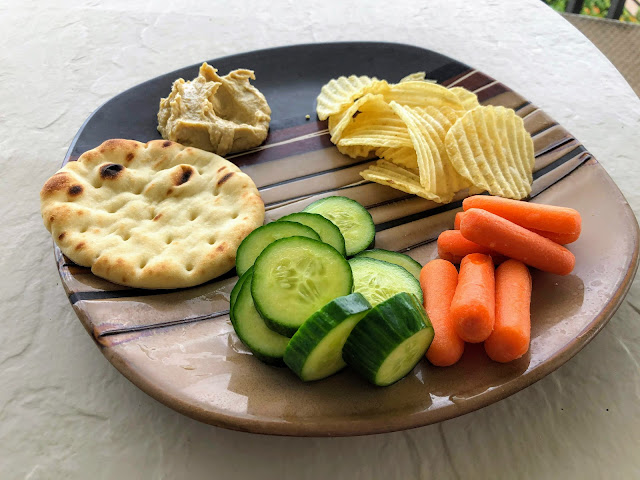 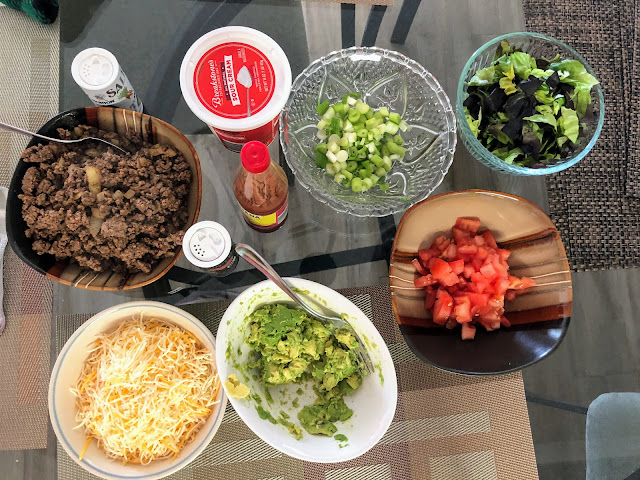 Usually when we make chili mac we can get two full dinners plus a few lunches out it.  We always let the kids decide how much they want and they usually take pretty skimpy portions.  So I was shocked to my core that we finished it after the second dinner.

From there we made a batch of tacos that saw us through 3 nights.  And we went out to dinner for sushi with our friends who live in the area for the final night. 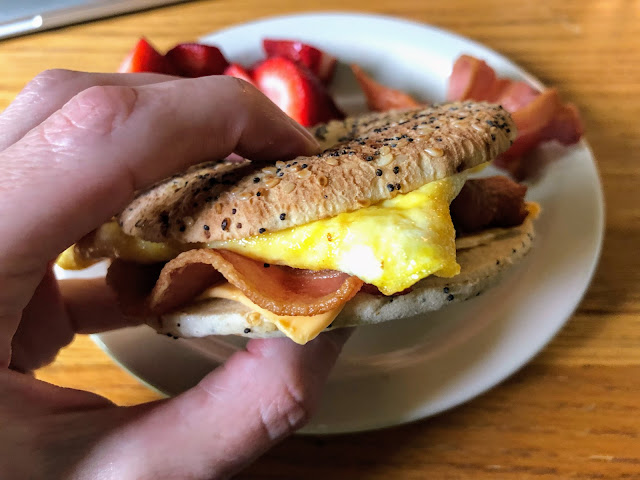 Everything Bagel Thin with bacon, egg, and cheese for breakfast 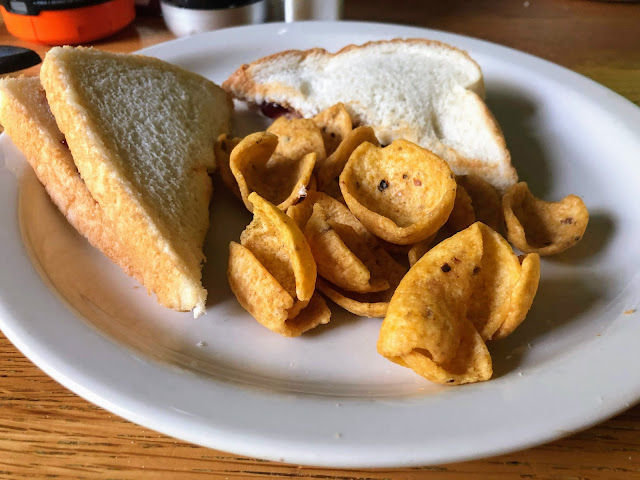 I'm on a PB&J kick for lunches. 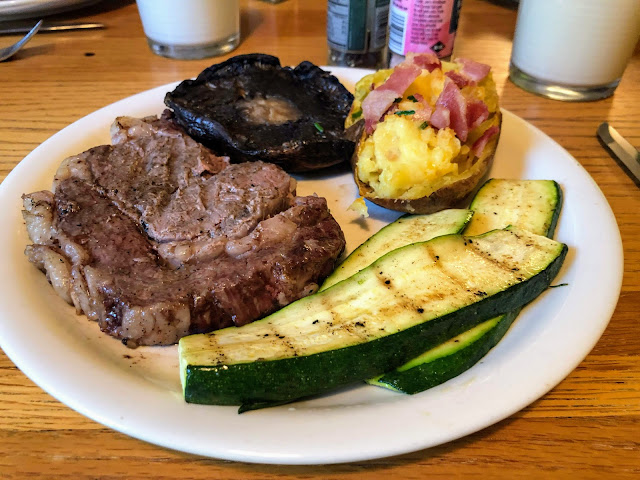 For our first night home from vacation, I was thinking of grilled chicken but then I remembered that we had steak in the freezer and the meal took off from there.  Portobellos for the adults (shocker: the kids each tried a bite), grilled zucchini, and the Triumph of the Twice Baked Potatoes.  The triumph part is that stepson #1 hates mashed potatoes (it's not a kid being picky to be picky thing, it's a he got sick while eating them once and it left a bad association thing).  Lately I've been making twice baked and been able to get away with it, and last night he told us that "the eggs were really good" (yeah stepkids really don't eat eggs much either).  Whatever, I will take it.


Tonight's dinner: family bash, likely to be meatballs.  Stepson #2 and I made chocolate chip cookies.

Workouts
15 miles of running this week.  It's week 4 of this plan, which is a cutback week and it was very handy that it lined up with vacation.  I got all of my runs in at sunrise (to reduce sun exposure and to treat myself to gorgeous beach sunrises) and finished all of my runs with a dip in the ocean.

It's tough to compare the weather at the beach with the weather at home...it was hotter/more humid but I was also running shorter and there was a nice breeze on the beach and oh yeah just the fact that I was on the beach.  I had a glass of Nuun before each run (jury's out on whether it's the electrolytes or just the fact that having Nuun guarantees that I'm drinking a bunch of water before I start) and rubbed ice on the back of my neck for a minute before I went out.  And I took my running water bottle with me.

I definitely did not work on hill running this week lol. 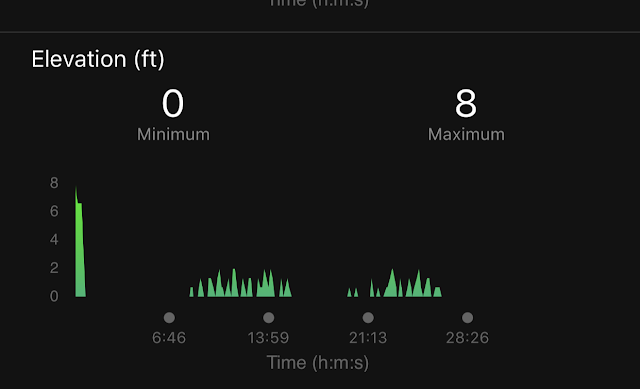 Monday: 3 mile beach run.  The notable of this run is that I could only find one ponytail holder so I had to go with a ponytail instead of my normal power bun.  My pony tail clumped up into a solid mass that took nearly as long to comb out as the entire run.  Not fun.
Tuesday: 3 mile beach run, power bun back in place.
Wednesday: 3 mile beach run.  This was the only run with a workout in it, a quick 6 x 30 seconds of speed/1 minute recover.
Thursday: off
Friday: it was noticeably cooler with light rain, so I changed it up with a sidewalk run and took a break to walk on the pier (running on the pier was banned).  And then treated myself to a dip in the ocean.
Saturday: early flight so no chance to run in the morning.  If you're keeping track, I believe this is the 2nd time in a year and a half of these weekly recaps that I've had a workout scheduling conflict...it just doesn't happen very often when you work out first thing in the morning:-).  It was a solid 85 back at home and I just couldn't get my head around running in that so I took it down to the treadmill after dinner for 3 miles.  I threw in some hills for kicks (one minute hill/four minutes recover alternated 3% & 6% - I got the idea from a workout that Laura posted, I can't find it now but if you check out her blog you'll find an idea that's just as good or better.)
Sunday: off
Bad Girls Club status: I didn't forget to write about my weight workouts this week, um, I didn't do them.

Watching
Family viewing: Firefly and Good Omens.  We started watching Good Omens a few weeks ago while stepson #1 was away at scout camp, so we had to go back to the beginning and catch him up.  We didn't really mind.  It took him an episode to get into it but he soon became the biggest fan of all of us.

Reading
In spite of all the eating, running, and TV watching, I hit a personal best for beach reading this vacation.  Picking up from where we left off last week, in order read:
If you were going to read just one book off this list, I'd say Tattooist of Auschwitz is the way to go, but I'm giving Secret Lives of Midwives the award for my favorite vacation book of 2019.

Posted by Birchwood Pie at 5:04 PM