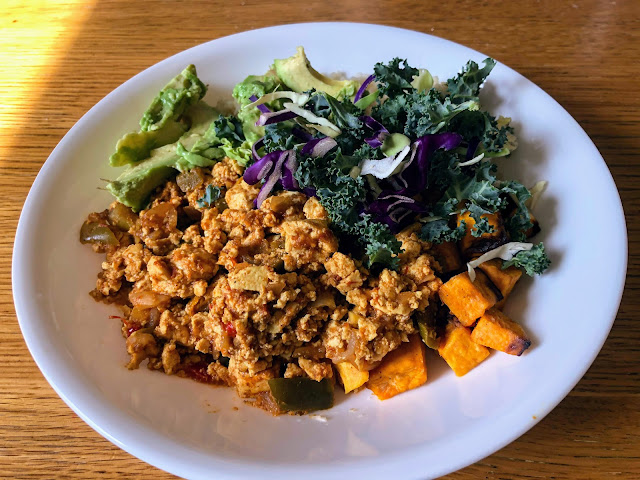 A weekly roundup: eats, watches, and reads...an oh man I have some incredible eats to share this week.  I pushed the envelope a bit on our menus and lesson learned, I need to do that more often.

We're minimizing our trips away from the house for the time being, so some of our meals are planned and some are spontaneous combinations of food that we have around the house.  Basically no different from our pre-COVID-19 lives.


Breakfasts
Anyone mind if I just skip over these?  Look back to any previous post and you'll get an idea...breakfast burritos, avocado toast, cheesy English muffins, and of course air fryer french toast before my Saturday long run.

Lunches
The star of the show is Pinch of Yum's Spicy Sofritas Bowls, which I made last Sunday with some substitutions.  In the bowls: cilantro lime rice, which is buried in my pic so take my word for it, air fryer sweet potatoes, the tofu, avocado, and some TJ's kale slaw mix.

I would be perfectly happy eating sofritas bowls until the end of time, but I mixed it up...first up a "fridge cleanout" burrito.  Refried beans, frozen pepper/onion mix, frozen leftover steak, cheese, salsa, and avocado in an air fried tortilla. 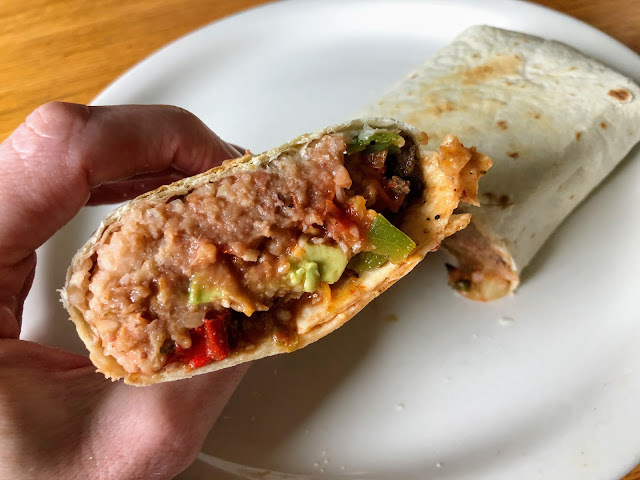 And today I paid a visit to Pinch of Yum for Spicy Sesame Zoodle bowls and was not disappointed. 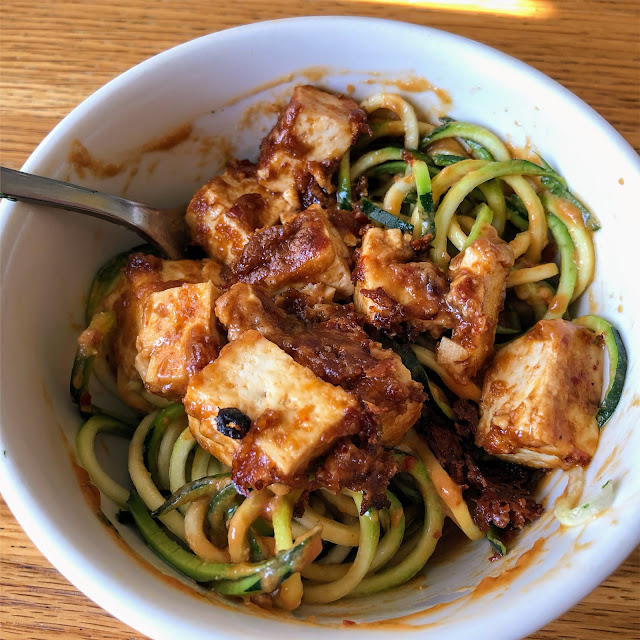 Dinners
Monday: started the week off on an easy note with Costco orange chicken and egg rolls. 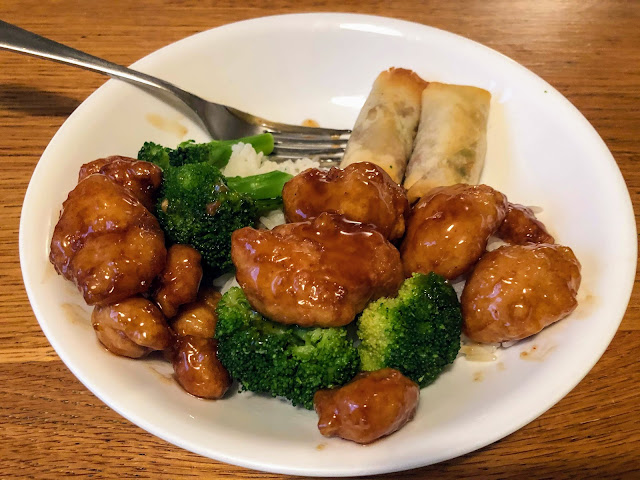 Tuesday: was grocery day and I let my family know that we would be having a leftover night and a steak night and let them choose the order in which those things happened.  They opted for steak first. 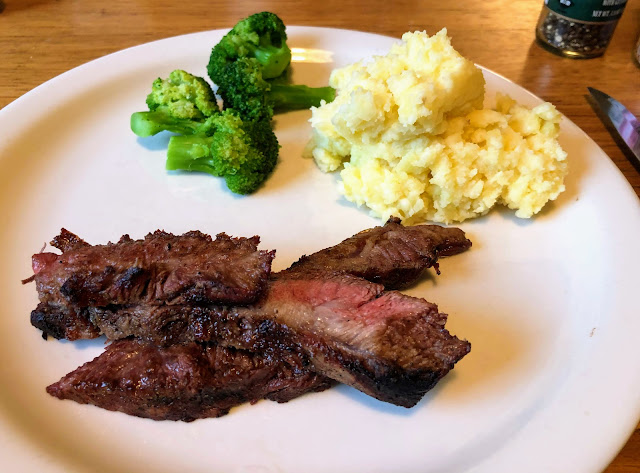 Wednesday: leftover night!  The kids had the rest of the orange chicken and we baked up a few egg rolls to go with.  Hubs had a leftover portion of Shepherd's Pie that was in the freezer and I had spinach artichoke pasta. 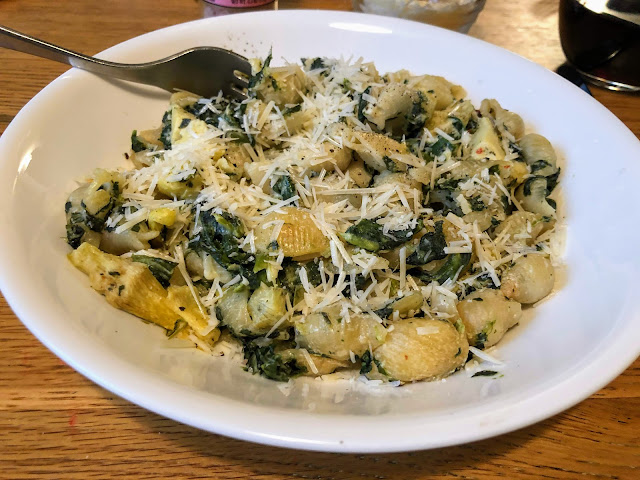 Thursday: I decided to Push The Envelope with a new-to-us recipe.  Julia's Album Sun-Dried Tomato Pasta with Chicken and Mozzarella.  And y'all know what, shame on me for not pushing the envelope more often because this was so good it made our toes curl AND our pickiest eater went back for seconds.  The next time we make this I'll cut back on the sun dried tomatoes a bit (or increase the rest of the ingredients in proportion) but this is a win. 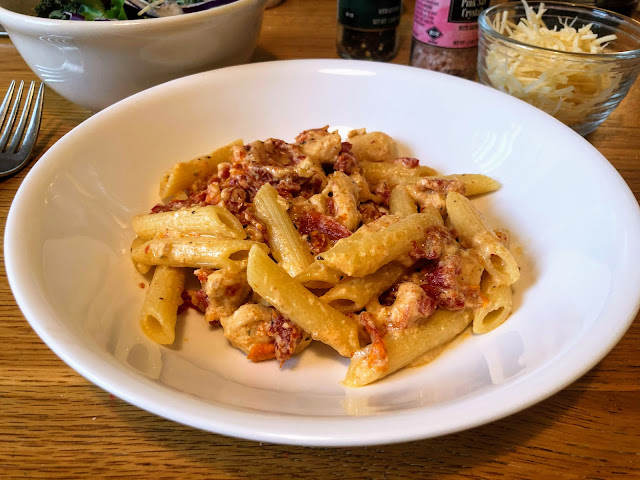 Friday: pizza/leftover night.  The steps had Stouffer's french bread pizzas, I had half of a California Pizza Kitchen spinach artichoke pizza, and hubs had leftover chili from the freezer. 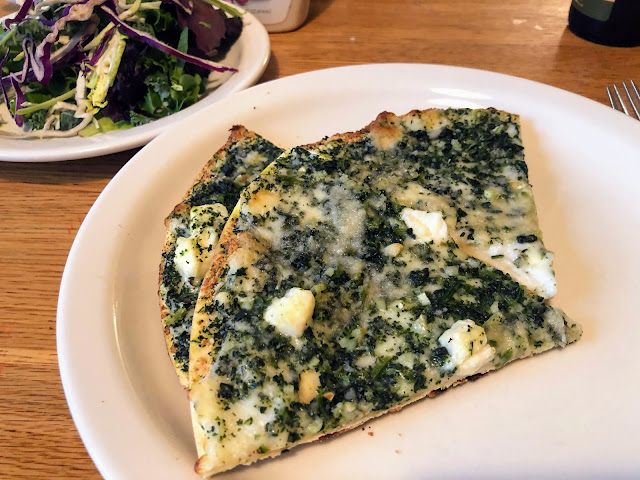 Saturday: again, we Pushed The Envelope with Shepherd's Pie.  The landmine here is that stepson #1 has an aversion to mashed potatoes, which is not a picky kid thing, it's a he-got-sick-while-eating-them-once-it's-a-bad-association-thing.  We made the offer up front that he didn't have to try a single bite unless he wanted to and he was down to try a small portion.  Stepson #2 likes mashed potatoes just fine but he's not big on different foods being mixed together.  Final verdict: kids ate it but said it wasn't their favorite, the adults were of course in heaven. 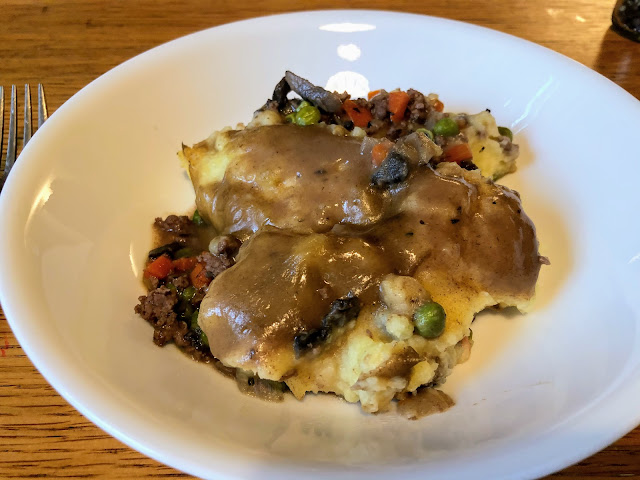 Sunday: the adults had leftover Shepherd's Pie, let's jump down to meal prep and I'll 'splain what the kids had.

Meal Prep
The stepsons are both in a place where they eat All The Time, with impressive height gains to show for it.  Our challenge is to come up with available "better than potato chips" foods ready to eat at all hours of the day.  They both adore rice and oddly enough they are both fans of tofu, so earlier in the week I made up extra rice the night we had orange chicken and also air fried up some tofu to mix in with it.  On Sunday I took things One Step Further and made Gimme Some Oven's Cold Sesame Peanut Noodles. 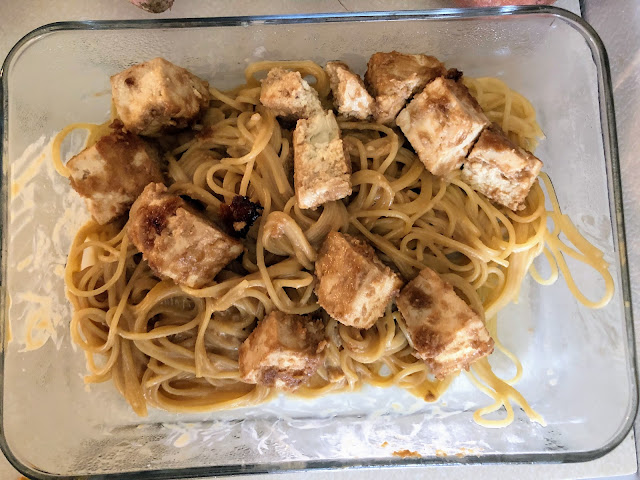 Alterations:
Stepson #1 had it for a snack right after I finished cooking it on Sunday and then the boys both chose to have it for dinner on Sunday night after given a couple of food options.  The leftovers are portioned up in single servings for snacking and/or meals next week.

Watching
A couple of movies, nothing spectacular to pass on.  As a family we saw Tron and Heat...well I saw the first half of Heat, we started it a bit late last night and oops it's 3 hours long and I'm the only one not on spring break so I had to leave it early.

Posted by Birchwood Pie at 7:28 PM