Weekly Eats: a 5k PR and a group run 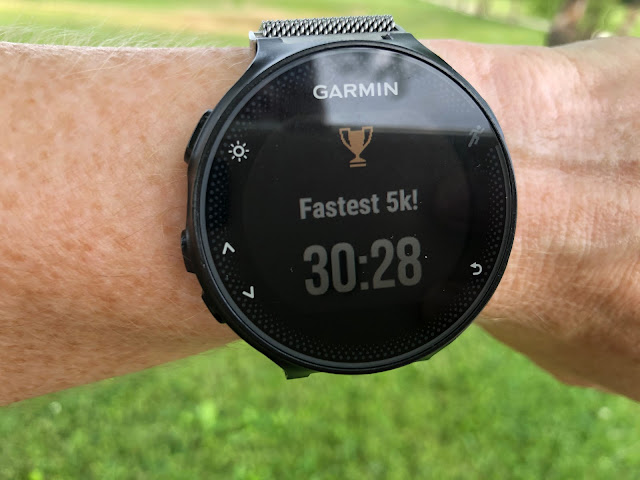 This was most definitely a "quality over quantity" week. 21.4 miles, a 5k PR, a run with new friends, and another race bites the dust.

Tuesday: a strategic rest day, since the forecast on Wednesday was very favorable for a 5k.

Wednesday: a 'lil 5k PR.  More about that in a minute.

Thursday: an easy 4.25 miles.  I probably should have taken a rest day but the weather was ideal so I jumped on it.

Friday: I met up with my new running group for a planned 4 mile run...and ended up with "a half of a half" at 6.55 miles (the meetup was about a mile from home so that's how 4 miles became 6.55).  Outside of racing I've run thousands of miles by myself and about 5 with other people...and I am sold that group running is the way to go.  I felt like the group was going just a little faster than I would have run on my own, so I didn't look at my Garmin and just chatted and the miles piled up quickly.  As far as social distancing, that was very easy, and c'mon we're all runners, no one is going to get that close to each other.

There's another date on the calendar for next week.  And yes by rights I should have done weights but I had to leave early for the run and I was feeling a bit beat up from the 5k so I skipped them without a moment's regret or hesitation.

Saturday: rest day and my goodness I needed it.

Sunday: 4.25 very steamy treadmill miles.  I didn't even consider taking the run outside for one moment.  P.S. this would have been the "real" race day for the 10k that I did virtually 2 weeks ago, and I am very glad that I got to be in my basement with a fan and AC today instead of outside.

All About the 5k
One of my running goals for 2020 was to run 12 races for an average of one a month.  As of two weeks ago I'd run 5 races (one of them with other people!) so I was on the lookout to get another 5k done in June to keep me on track for my goal.  The forecast was showing mid 50s for Wednesday morning, so I cherry picked that for a 5k.

For all of my other virtual races, I was actually registered for something, either "real" races that went virtual or the Rambling Runner race series on Strava.  Wednesday's effort was "a race because I say it's a race."  No, it needs a name, let's call it the inaugural "Cool Weather Cruise 5k".  Ok, you can call it a 5k time trial if you want but I'm calling it a race.

That morning I took my time over a cup of coffee and a Clif bar (my normal weekday pre-workout breakfast these days) and then had a glass of UCAN for good measure, exactly what I always do before I race.  Then I headed out to the park with the flat trail and made my way to the official start line...ok, you can call it a park bench if you want but I'm calling it the official start line for my race.

At my last 5k I was ambitious with my pace, so this time I set up a workout on my Garmin to help me out.  My goal was 9:50-9:40-9:30-ish splits and I set the total workout time just a tad long because god forbid that any of the billion running apps that I use would drop the last data point and just record is as a 3.09 mile run instead of a 5k.

My first virtual 5k was a PR but it was also a ginormous positive split.  This time by controlling the pace early on I was able to avoid that, though by the time I got to 2.5 miles I just couldn't hardly even and started to lose steam. 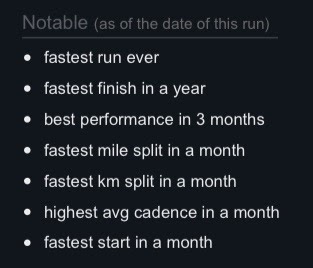 Pace wise this is way faster than the last 5k so yay, but the sub 30 5k seems a long way away...I would have had to run each mile 10 seconds faster to get there.  I think the goal for the next 5k is just getting a negative split.

Race Cancellation Recap
My Hometown Marathon made a lot of noise that the race was going on in late September and there was a plan in place to make it happen.  Bless them for talking a good game but it wasn't much of a surprise when the announcement came out that, um, the city wasn't willing to close down the roads for as long as it would have taken to do a full marathon with a staggered start so it's a no-go.  The options were to defer to next year, go virtual, or just donate your entry fee and walk away.  So yep, virtual it is.