Weekly Sweats: The Return of the 10 Mile Race 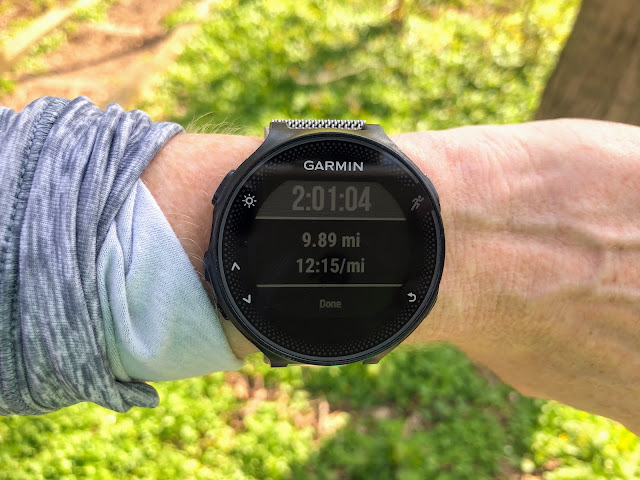 In this week's edition, I ran 27 miles, got my strength workouts in, and returned to one of my all time favorite races.

I'm linking up with the Weekly Run Down, please head over to Kim and Deborah to check it out.  Special shout out to everyone running Glass City today!

What I normally do for race week is to just shorten the last few runs before race day and take a full rest the day before the race.  My coach started things off with higher-than-normal miles on Monday and then decreasing miles each day.

Thursday: 4 miles easy, strength in the evening.  My body was like "hey I wanna run more".

Friday: If I'm going to run at all, I usually don't run less than 3 miles.  But when my coach loaded up 2 miles easy and then 3 x 30 second strides with one minute recover I was all about it.  I haven't done any fast running for quite a while, so it was fun to really tear it up for the strides.  When it was over my body was super like "c'mon I wanna run more".

This history of this race is that I first ran it two years ago as a trial run for my first half.  At the time, every race was a PR, and this was a particularly exceptional one.  After that I had one more stellar 5k, and then I ran my first half and began learning the hard lesson that not every race can be a PR.

I knew that the one thing that I could not do was to have any thoughts of the 2019 race, because it was a dangerous comparison trap.  It's 2021 now, and a lot has happened in the two years between these races.  The way to make this happen was to keep my Garmin under my sleeve for the duration of the race and just run.  The only goal that I had was the very vanilla "finish in less than 2 hours".

This is a large Big City race, so the two issues that the race organizers had to deal with were "large" and "Big City".  The "large" part was handled by splitting the race into starting waves, with each wave starting half an hour apart.  The "Big City" issue is that although racing has made something of a comeback in my region, the Big City is an exception.  There is a ban on all large scale public events for the duration of the pandemic,  including races.  The solution was to move the race just outside of city limits.

The course was on a paved walking path in one of our state parks, which was nice because it was almost completely removed from city streets, and in a very peaceful and serene setting.  5 miles out and 5 miles back.  The course was described as "flat with one hill".  Between friends, we all know that if someone tells you that a race course is flat and you do not have personal knowledge of the course, the correct assumption is that you are being misinformed.  More about that in a minute....

I was in the first wave of the race, which meant a 5:00 alarm and wheels up at 6:00.  I had a pretty clear idea of what I needed to do to get myself out of the house on time, so I didn't lay out Flat Runner the night before.

How it played out

Everything went according to plan. The weather was on point as promised: a sunny day in the mid 40's with minimal wind.  I finished my coffee and ate my breakfast of a Clif bar on the drive up.  I got to the race site with plenty of time to spare, and drank my UCAN in between restroom visits.  10 minutes before the start I strapped into my hydration pack and ambled up to the start line.

I don't want to be a narc but...the start line for this race and the 15k that I ran last month had no special COVID precautions at the start line.  The race site recommended wearing a mask when not running and specifically stated that participants would be spaced out and that there would be markers on the ground so that you were certain to be 6 feet apart from other runners at all times.  The reality was that I'd say about half of the runners were wearing masks but other than that the start line was pure 2019.  On the one hand...it was outdoors and at this point a lot of people have been fully vaccinated so I wasn't super concerned, but on the other hand just saying that it's really easy to do a staggered start line.  My real beef with the pre-COVID start line is that with everyone starting at once the first lick of the race was very congested.  I'd forgotten what it's like to start running and have to stop dead in my tracks because a group of three people are walking side by side.

Once the starting herd broke up I spied two women running together, one in a green shirt and the other in a tie-dye.  I got myself at a "social distance" behind them and tucked in.  The first water stop was just before mile 2 and they both stopped, so I went ahead of them, figuring that they would catch up with me.  Sure enough, a few minutes later my rabbits were ahead of me again.

Speaking of water stops, as soon as I passed the first one, I realized the other HUGE advantage of wearing a hydration pack specific to racing.  I don't know about y'all, but normally when I go through a water stop I grab a cup of water and walk for just a second while I drink it with the goal of finishing it before I get to a trash can (in the event that there is no trash can I simply flatten the cup and stick it in my FlipBelt...I never have and never will toss a cup on the ground).  More often than not I'm gulping a full cup of water and getting going again with a big slosh-slosh in my belly.  Well, when you have a hydration pack, you don't have to do the gulp n'go.  You have as much water as you want and not a drop more with every sip.  Another "I was blind and now I see" revelation.

Overall the course was fairly easy except:

After the turnaround there were a decent amount of runners behind me on the way back, both the back of the packers from my wave and faster runners from the next wave, so there was quite a bit of people watching and cheering for each other.  When I got to the hill I decided there was no point in running, so I walked and started working on my Gu.  Once hilly was in the rear view mirror I got my run on again.

After all of this Green Shirt and Tie Dye were still comfortably in front of me, so I planned to keep the game up and smoke them out at the finish.  Mile 6 was done, then mile 7, and then my rabbits took a walk break.  I passed them and...did not see another human until well into mile 9.  Eh, I took a minute to walk for no particular reason and then got going again.  In 2019 I was pretty tired by that point but was determined to get the final mile under an 11 pace.  2021 me was merely ready to be done and didn't put any particular spunk into the last mile.  I did pick it up a bit at the very end of the race.

I am torn on the results.  While running is feeling better lately, I know the speed isn't there so it was most likely a good move to "just run" and not push it.  Apart from sleeping really well last night I don't have any soreness or anything to recover from.  On the other hand, my pace for the race last month on a difficult course with a lot of wind is the same as my pace on a "not that difficult" course with perfect weather????  Really????

There were no closing ceremonies but the race had plenty of food and swag at the finish line.  I got my medal, a banana for my husband (it's our "thing", whenever I race I bring a banana home with me), and yay chocolate milk!!!!  I walked around the park for a bit sipping the milk, and then I went to my car, rolled out my legs, and headed for home.

Asking for a Friend

Why on earth are race courses ever shorter or longer than the advertised distance? I don't need it to be accurate down to the foot, but why make the course 0.11 miles short?  I can see it if the start line and the finish line are the same, but they weren't for this race.  The setup was the parking lot of a huge park so there should have been plenty of real estate to get the correct distance.  I have an identical observation about the 15k, which was 9.5 miles, so a noticeable gulp too long.  No I'm not saying that my Garmin is 100% accurate but I am saying that it is curious that every posting on Strava falls between 9.87 to 9.92 miles so yes I am saying that I've seen plenty of race courses on the long and the short side.

More running!  I have a 10k in late June, which was planned to be virtual since it's in the Big City BUT oh snap they found a location out in the boondocks, so it is currently planned to be a live race.

Posted by Birchwood Pie at 1:28 PM