Weekly Round Up: Salad Shoutout 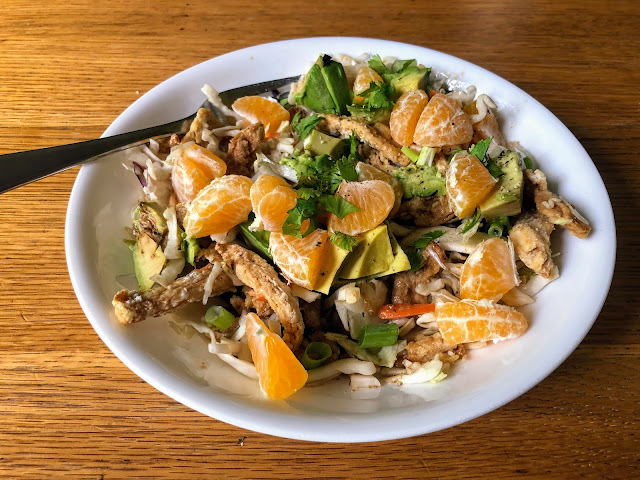 A weekly round up: eats, workouts, watches, and reads.  In this week's edition I have a new favorite salad and I'm going to tell you how my family did when I turned dinner responsibilities over to them.

Friends, I'm not one to hype "salads as meals".  It's hard to find a balance between "a few leaves of lettuce and a splash of dressing" and "a gallon of dressing, a pound of croutons, and everything else that's yummy with a lettuce leaf in there somewhere".  So if I'm hyping a salad, you know it's good.

May I present Gimme Some Oven's crispy coconut chicken salad with sesame vinaigrette?

Right now I just can't stand chicken at any price, so I swapped it out for half a bag of soy curls prepared using the Cheap Lazy Vegan technique of dusting them in corn starch and adding a little garlic powder and then air frying them for about 10 minutes until they are crispy.  Other than that I stuck to the recipe as written.

I enjoyed this as a salad and even more as a wrap. 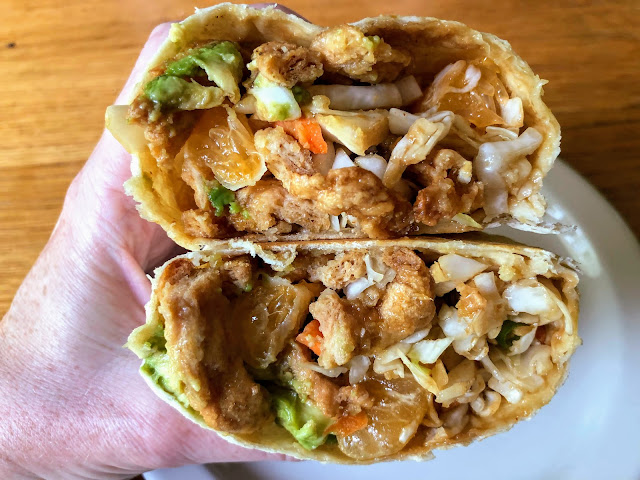 Now let's catch up from last week.  Cooking dinner has become my least favorite part of the day and now that the rest of the family isn't in school/planning for an epic Boy Scout hiking trip it's time to share the wealth.  Hubs made dinner for us on Sunday, and he asked the boys to each come up with a meal that we would help them cook.

Monday: stepson #2 was the chef and he picked spaghetti carbonara from Mark Bittman's How to Cook Everything.  Hubs helped him cook.  Together they decided to omit the bacon and that an entire pound of pasta for four people sounded like a lot so they cut that in half.  They also didn't feel that the recipe had enough cheese so they adjusted that to taste as well.  It was divine. 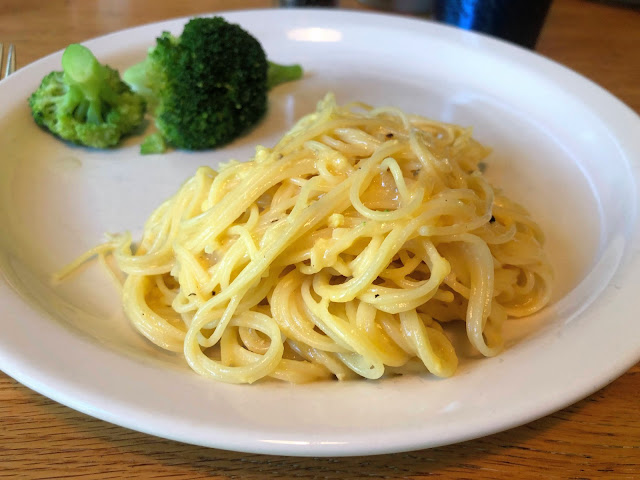 Tuesday: hubs had to go out of town on a work trip, so it was just me and the boys.  Stepson #1 picked tacos for our evening meal and on Monday night he and I took inventory and came up with a shopping list.  He flexed his new driver's license and went out to the store to pick up ground beef, lettuce, and green onions.  I had given him $20 to cover everything and was shocked when he gave me $13 in change so note to self, send that kid to do our grocery shopping more often.

Tuesday was a rare ultra busy workday for me and I was glued to my computer well past 5:00, which is rare for me in this job.  #1 had been out with a friend all day and came back with said friend a bit before dinner time.  I was wrapping up my work and knew that when I went downstairs that those darn kids would not have done a single thing towards getting dinner ready...which was fine, we didn't have anywhere to be that night and they're kids so of course they're not going to start cooking dinner on their own whim.

My train of thought was interrupted by stepson #2 coming upstairs: "Dinner is almost ready".

I got the surprise of my life when I went downstairs and saw #1 and his friend in the act of putting every possible taco topping into serving bowls and moving them to the table.  Dinner was ready and it was delicious.  The only drawback is that #1 only got one pound of 73% ground beef (the reason why dinner was so cheap) so it cooked down to nothing and was a bit skimpy for the four of us.  We each got a small portion of meat and those with teenage boy metabolisms upped their cheese a lot more than I did to fill out their tacos. 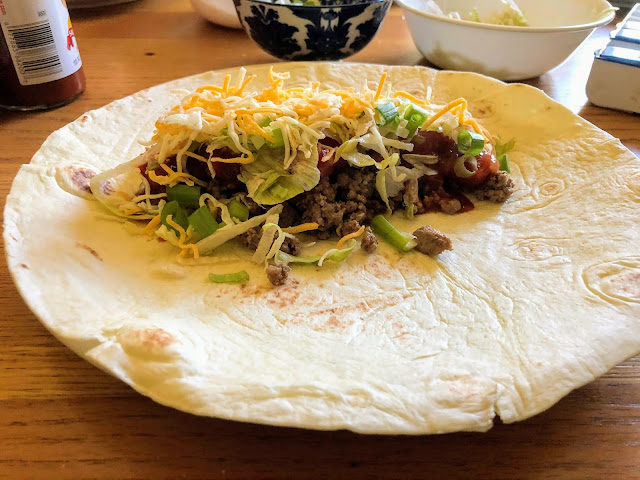 As we were eating I made the quip that it was Taco Tuesday and we realized that we'd also done Shipwreck Sunday.  We came up with Whatever Wednesday and that's as far as we got with "day of the week meals".

Wednesday: I made the executive decision to use up the leftover taco toppings and got us another pound of ground beef.  The boys pitched in to get another round of tacos on the table.

Thursday: solo night!  The boys went to their mom for the weekend and hubs got back from his trip late that night.

Friday to present: one big long family Fourth of July party.  That's why I'm a day late and a dollar short with this week's post.

Not much to report.  A mix of good and bad runs.  I'm mostly back on the treadmill due to heat.

The July 4th tradition that I'd forgotten about!  Hubs and I started season 4 of Stranger Things this weekend.  About halfway through the first episode I was just like "who are these people and what is this show about" but the feeling didn't last long before I got swept back up in the Stranger Things universe and we're hooked again.

I think I've got a good one!  The Golden State by Lydia Kiesling.  A mother of a toddler gets stressed out and makes an impulse decision to walk away from her life in San Fransisco to live in her late grandparent's trailer park and figure out her life.

Posted by Birchwood Pie at 4:50 PM