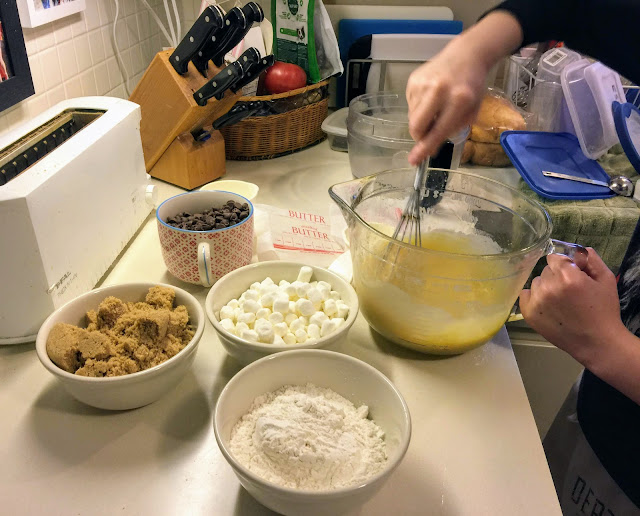 This week we had lots of much needed downtime, did lots of cooking, and I chickened out of a Turkey Trot. 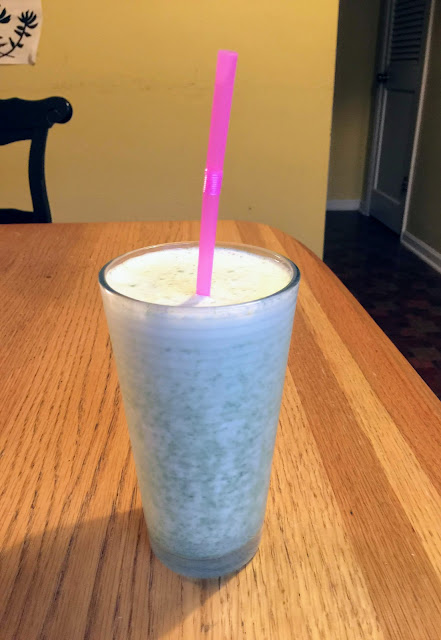 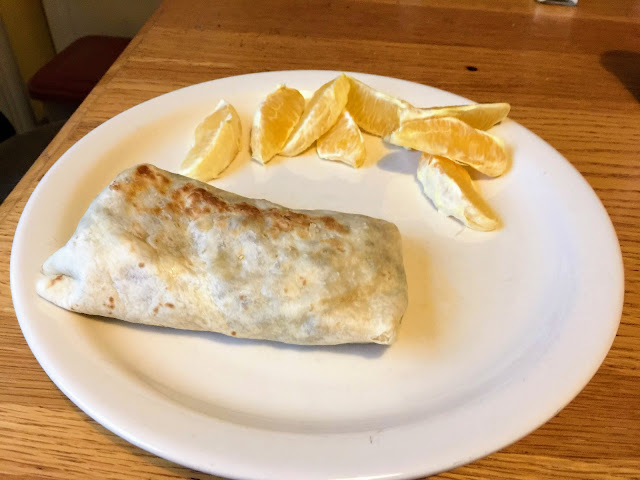 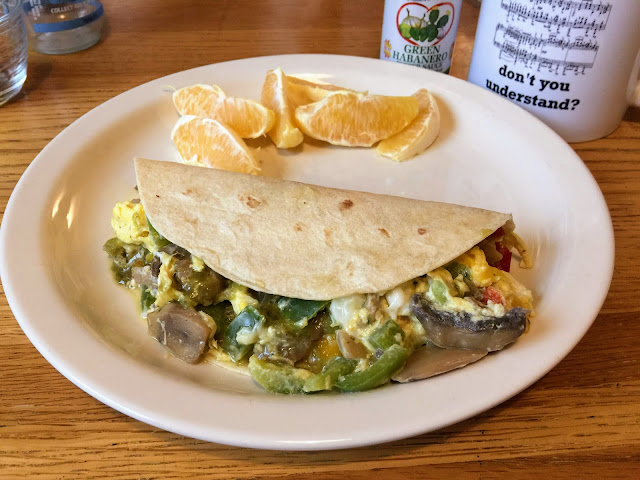 Saturday: egg, toast (half with marmalade, half under the egg to soak up the yolk), fruit, and bacon.  We were caught horribly short and only had two pieces in the house, so we each got a slice. 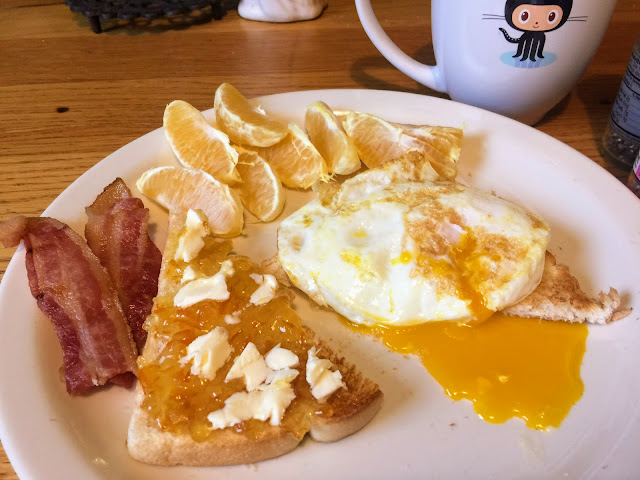 Sunday: waffles and chicken sausage via my hunky husband 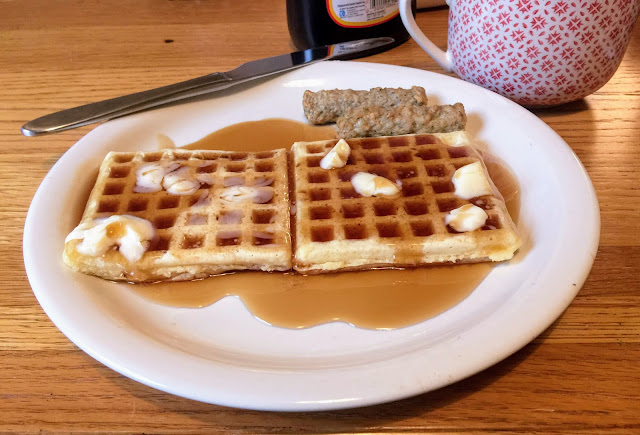 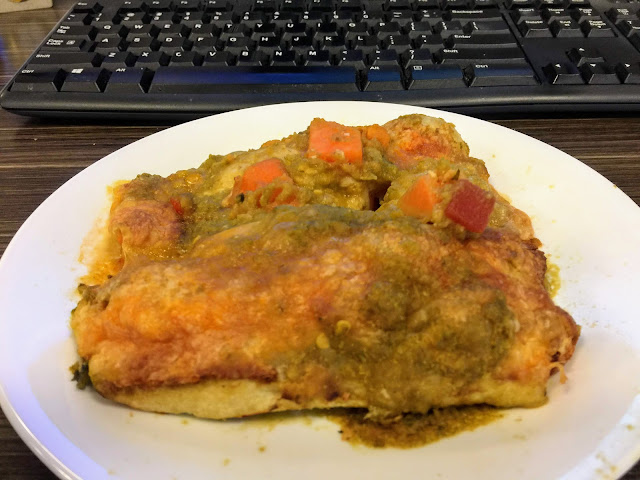 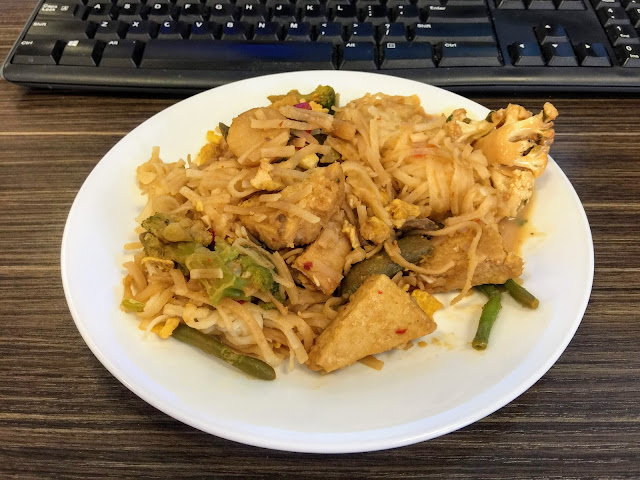 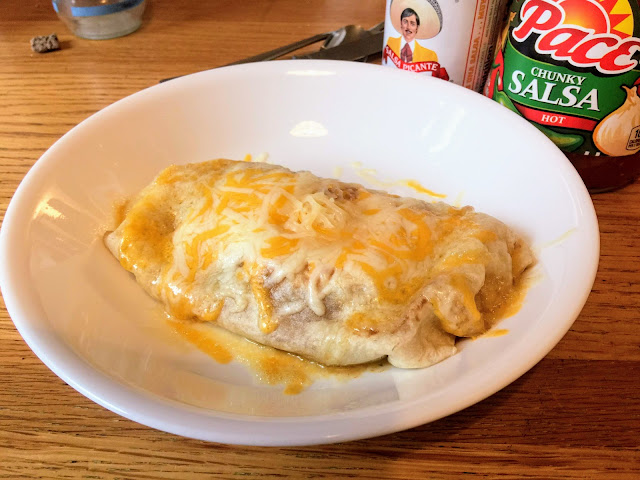 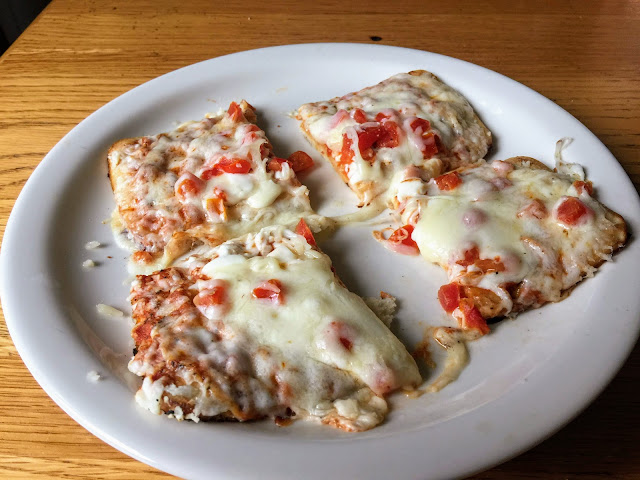 Friday: another post run round of California Kitchen Flatbread.

Dinners
Monday (family meal): stepson #1 and I had leftover pizza, hubs and stepson #2 had lasagna. 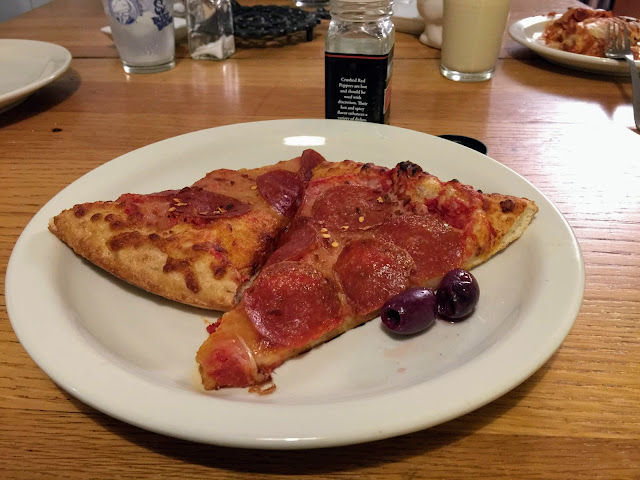 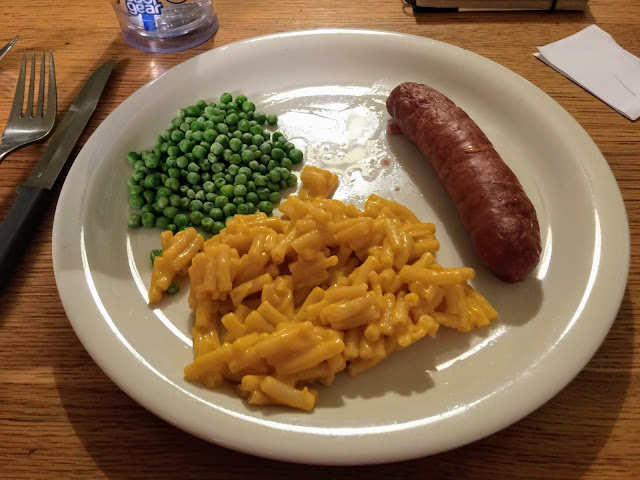 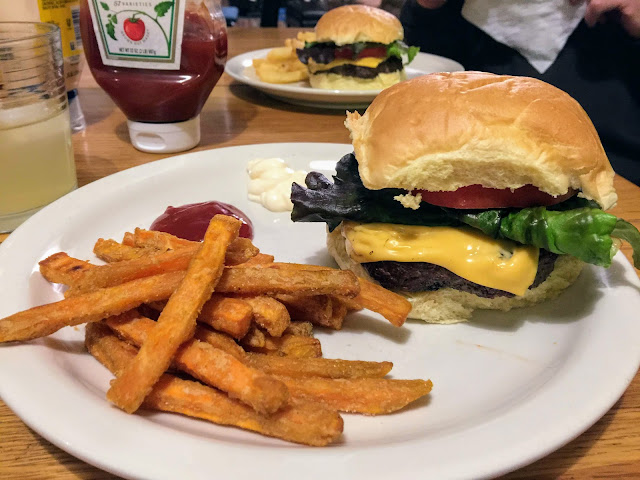 Friday (out on the town with family): another big ol' burger and sweet potato fries

Saturday (single girl night):  Hubs went out with his buds, I stayed home with a veggie burrito.

Sunday (family meal): grilled chicken with everyone's preferred sides.  I was all about leftover sweet potato casserole, hubs got regular mashed potatoes, and kids got pasta.  I made the pasta and then turned it over to them to season with butter and onion powder. 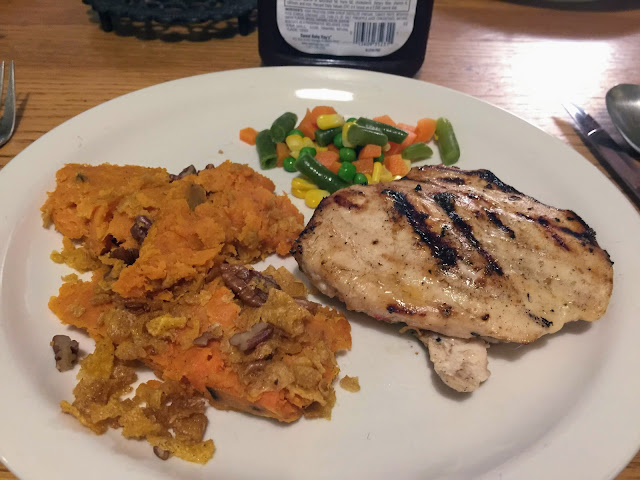 Thanksgiving
We had a huge crowd, so my husband made a smaller turkey to supplement SIL#3's bird.  As I mentioned, turkey and I are not friends.  It's a childhood trauma thing of being forced to clean my plate no matter what...guys I don't know what the answer is to get kids to eat but I can tell you that for me personally this led to some lifetime food aversions.  I helped him make up the brine and then peaced out and left him to it.  Everyone raved about his cooking.

(Side note: if you wondered why the kids had pasta with their dinner tonight, it's because stepson #1 has an aversion to mashed potatoes because he got sick while eating them once...after my reaction to the turkey I'm particularly sympathetic.  Stepson #2 likes mashed potatoes just fine but tends to have his brother's back in these matters)

On Wednesday morning, I made up Jo Cook's pecan pie bars. 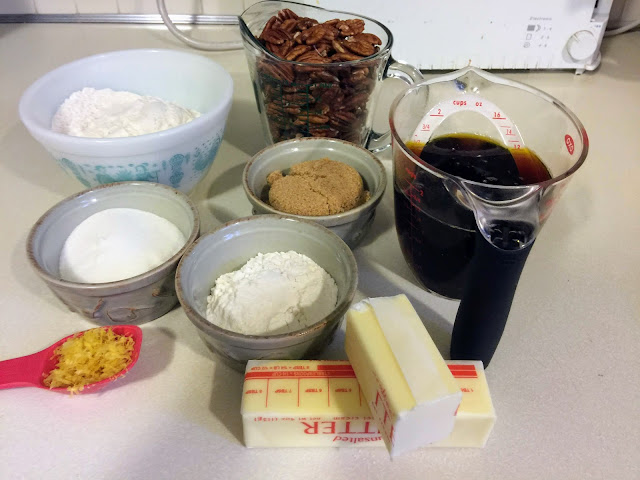 In the afternoon, I put stepson #2 to work on a double batch of s'mores bars. 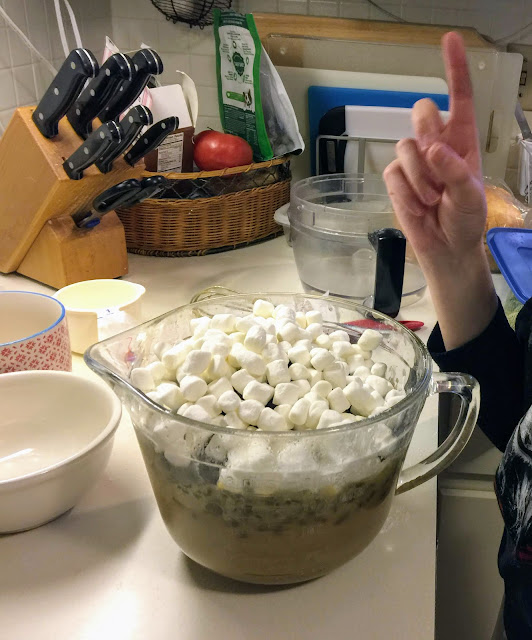 The best way to judge a dessert is by how much is left at the end of the night...just sayin that we didn't come home with any s'mores bars.  And not so many of the pecan pie bars but the s'mores bars stole the show. 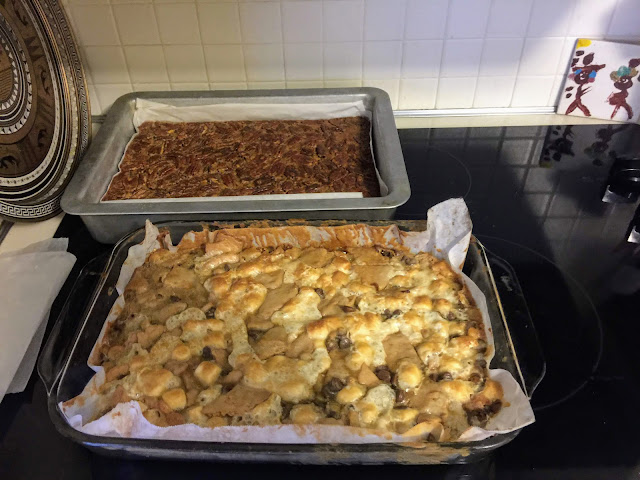 We were in a rush to get out the door, so I'm short on pictures, but here's the rest of what we made:

Dinner rolls: great recipe, but I'm bad at judging portion size and made the rolls too small.  Pro tip: if the recipe yield is 30 and you end up with 50, you're doing it wrong.

The mac and cheese was a hit, I mean with that much cheese how could it not be?

And I was very pleased by the sweet potato casserole. and so was everyone else since it got eaten.

As for my plate, I heaped up on SIL#4's green bean casserole, mac and cheese, sweet potatoes, and broccoli cheese casserole.  I barely had room left for dessert, but did what I could.

Workouts
Monday: weights and 3 mile treadmill run
Tuesday: 6 mile treadmill run
Wednesday: off
Thursday: was supposed to be a Turkey Trot 5k.  It was really cold, the race was far from home, and I wasn't feeling great...so...I went back to bed and then did 5 miles of intervals (2min hard+2min easy) a bit later in the morning.  This is the 2nd time in my life that I've bailed on a race and no regrets.
Friday: it was warmer and sunnier so I headed outside for 4 miles.  It was one of those "everything is right with the world" moments, I forgot to bring my headphones and didn't miss them, and I was pining that I don't get to run outside more often.
Saturday:I planned on 11 miles and wondered if I could just up that to 12 to get 30 total miles for the week...first my feet said no and then my body said no.  I cut it short with 10 very slow miles.
Sunday: off
The foot thing: remember how I ran 10 miles on the treadmill 2 weeks ago?  Yeah, my feet didn't like that.  New shoes helped a lot and my feet felt great this week.  And then yesterday a few miles in to the run, they stopped feeling good.  And now I see with the whole half marathon training thing that the long run isn't supposed to be long every week.  It builds up and backs off.  So I will start doing the backing off part.  I love running so much that if I even smell an injury I will back off.

Watching
(from the treadmill): finished season 1 of Wanted, can't wait to see more.
(from the couch): hubs and I plowed through a bunch of Ozark.  On my single girl night, I helped myself to my favorite reality show, Married at First Sight (the newest season on Hulu, which I think is a few seasons behind everyone else).  Catching up on Manifest tonight.