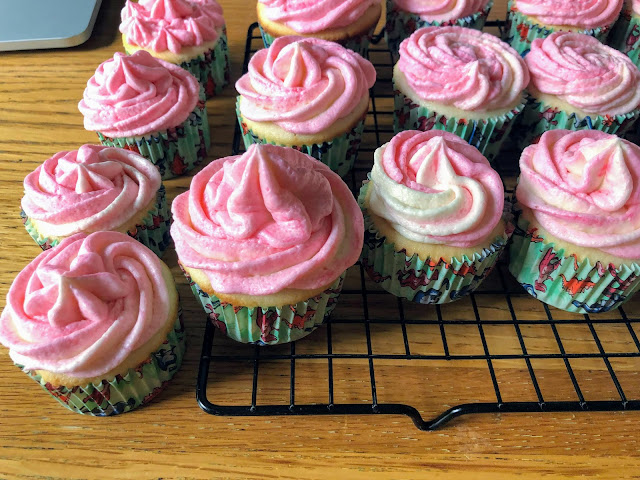 A weekly roundup: eats, workouts, watches, and reads.  In this week's adventures, I made cupcakes, ate a lot of tacos, and had my first session at a running clinic.
Breakfasts Lunches
Monday: A big ol' taco.  Even though we were having them for dinner, I needed one after a speedy run, lots of walking to see certain stepsons in the Memorial Day Parade, and taking a certain stepdog for an extra morning walk. 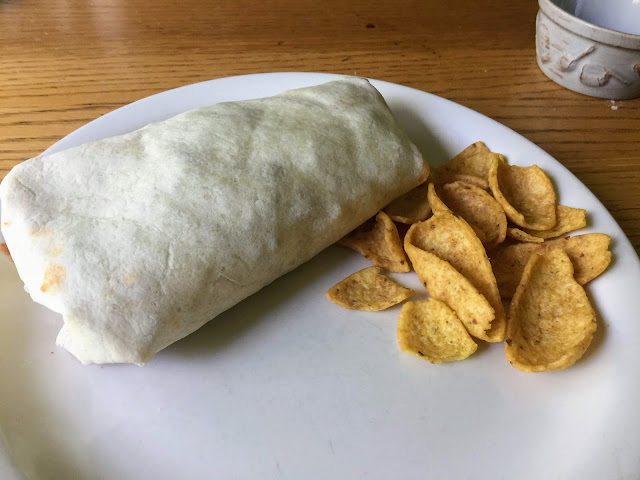 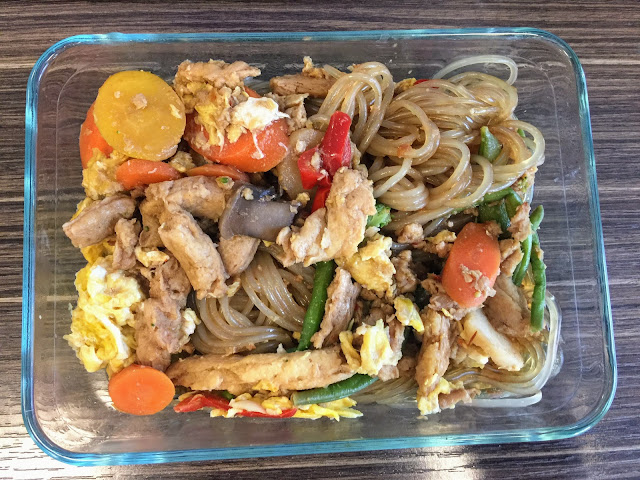 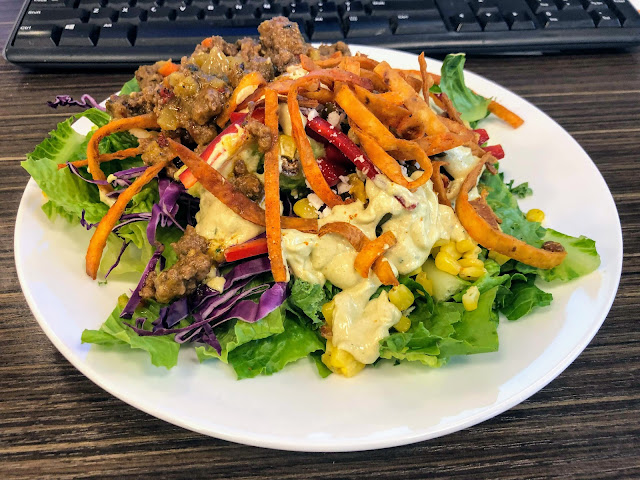 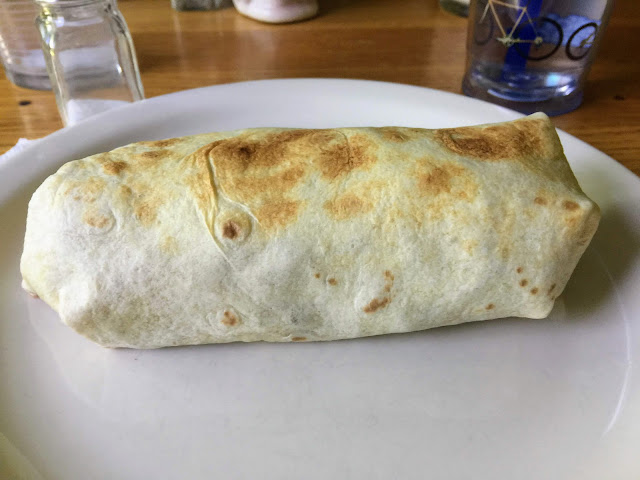 Wednesday (date night): lamb, mashed potatoes, and broccoli.  I experimented by cooking the broccoli in a foil pack on the grill - nothing wrong with that but also nothing special. 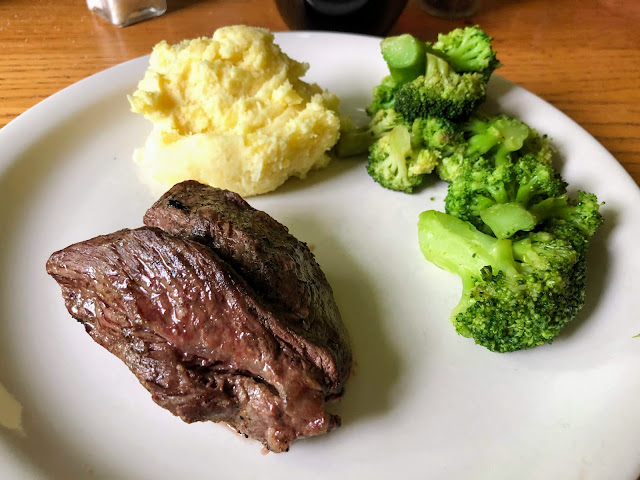 Thursday (fend for yourself night): leftover rice from the tacos, Costco stir fry veggies, avocado, and air fried salmon.  Topped with some sesame dressing from an Asian salad kit (I have a surplus of dressing packs from my recent coleslaw craze). 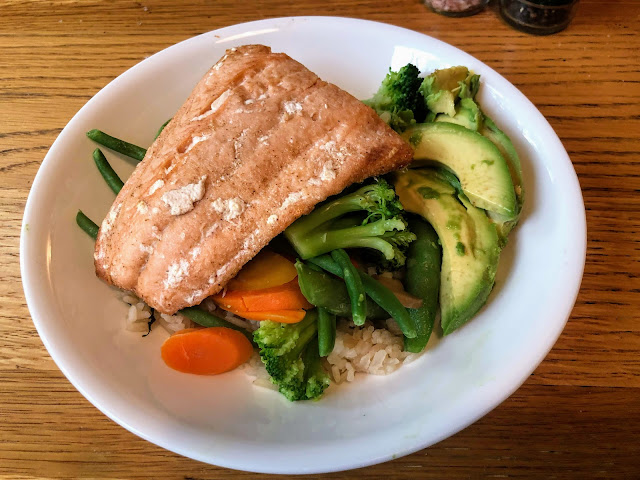 Friday (family meal): we had friends in from out of town.  Pizza, chicken, and jojos.

Saturday (double party night): I already had plans to have dinner with  The Quartet, a.k.a. my three best friends from grad school. At the last minute the SIL's decided to throw a family bash at our house, which is also one of my favorite ways to spend a Saturday night.  Why choose when you can do both - I hung out with family for an hour and then went to meet my friends for Mexican.

Sunday (family meal): we had my parents over for Thai takeout and cupcakes. 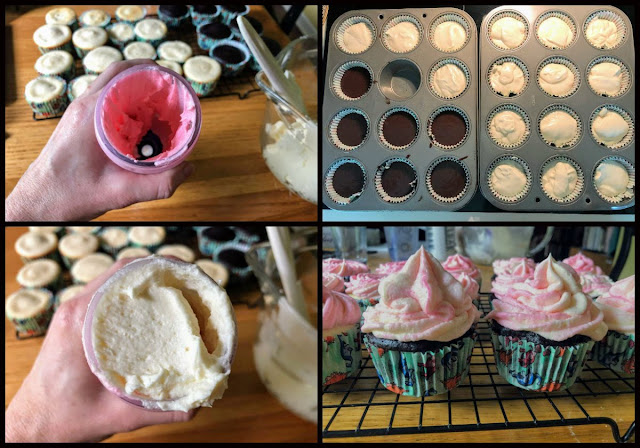 Between seeing my friends, the family party, and time with my parents, a batch of cupcakes was in order.  Specifically Sally's Baking Addiction Two Toned Rose Frosting with her white cupcakes and a small batch of chocolate cupcakes. 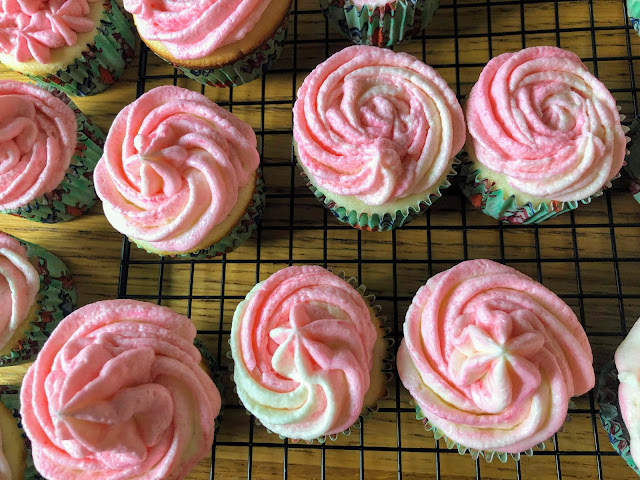 Meal Prep
Workouts
23 miles of running
Monday: 4 miles with strides
Tuesday: my body did not welcome the alarm clock after a 4 day weekend.  3 miles and called it a day.  Weights at lunch
Wednesday: 5 minutes of running at the running clinic.  More about that in a minute
Thursday: 3.75 miles.  This is the first time outside of a race that you've seen me run anything but an even number, and you may have picked up that I'm just a bit obsessed with numbers, so lemme 'splain, I have the Garmin F35, which is a very budget friendly version of the watch.  I used the workout mode for the first time ever, and it doesn't show your speed or distance at all.  My goal was 1 mile warm up, 1 mile cool down, 2 miles of 1 minute fast/2 minute recover but without having the distance to reference I came out short of 4 miles.  It's pretty amazing that I hit 3.75 on the nose.
Friday: you better believe that I got Thursday's quarter mile with 4.25 hilly miles.
Saturday: 8 miles, which is the longest I've run since the half marathon 2 weeks ago.  Usually I have coffee and breakfast before my Saturday runs, but I woke up really early so I decided to get right out there.  I had a glass of UCAN before and took a gel after 5 miles.  The last three miles were rough and in retrospect, it would have been better to eat something before and maybe just keep it at 6 miles to ramp back up to long running, but it was what it was. It was really great to get those miles and to have my workout done so early

The Running Clinic
I'm in the process of getting a second opinion on my running.  Although I've been able to increase my endurance, I haven't seen any improvements in speed and I can't figure it out but someone who knows what they're doing probably could.  One of our local hospitals has a PT program that gets you a video running analysis, two follow up appointments, and a nutritional consult with a dietitian.


I'm sure I'll write more in depth about the program once I go through it, but this is what's happened so far.  For the initial meeting, the PT and I talked about my goals (more speed, run more half marathons), did a kinda strength/balance evaluation that's hard to describe, and then she had me run on a treadmill for a few minutes.  She told me to pick a comfortable running speed (5.5) and let me run for a few minutes.  Then she videoed me from front, back, and both sides.  Next step: she will analyze every second of the footage combined with the strength eval and will make recommendations at our next meeting.  The only observation that she shared with me is that I am a heel striker (and she showed me the video to prove it).  So more to come on this next week.

Watching
Not much TV around here this week.  We saw Lethal Weapon as a family.


Reading
Ooh, lots of reading around here this week.  Got some good ones to tell you about: