Weekly Eats: What the Dietitian Told Me 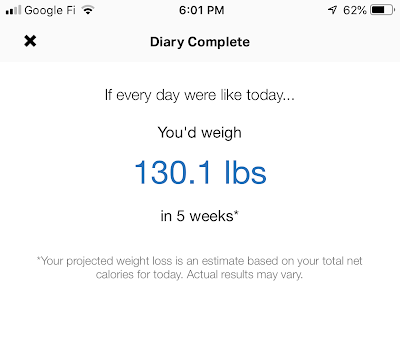 A weekly round up: eats, workouts, watches, and reads.  In this week's adventures, I saw a dietitian, went to Trader Joe's, got a new Garmin, and ran a bad 10k.  I have so much to tell you about this week, let's start with the dietitian.

If you've been following along for the past few weeks, you know that I signed up for a running program with a local hospital which included a 30 minute consult with a dietitian.  Our appointment was first thing on Monday.

To tell the truth, I'd kinda been thinking about seeing a dietitian since Kristina blogged about it.  I weigh about 10 pounds more than I would like.  Last year I put a dent in that but I also started running a ton more which makes me EAT ALL THE TIME.  For the longest time I was able to maintain the loss, but in the past two months the scale started going north of 140 again.  It's not so much about the weight as it is that I'm ravenously hungry all of the time, and the only thing that helps is to eat...a lot...of stuff that doesn't make me feel great.  The only doubt that I had about the appointment is that 30 minutes is barely long enough to say hi, so what on earth were we going to get done in that time?

She got my height and weight (5'5", 140) and asked me about my goals for the visit (see above).  She asked how I felt about my weight, and I told her that though losing weight isn't my top priority in life, I could sure do without the extra 10 pounds.

She asked me to talk her through a typical day of eating, specifically that day.  I told her...well you can see it all below.  She asked me questions about how I prepared certain foods and estimates of portion size.  She asked how I track my eating and I showed her the small notebook that I carry around in my purse (I didn't say "birchwoodpie dot blogspot dot com")

Her take: she thinks my vegetable intake is good (something I never expected to hear anyone let alone a dietitian to say to me), but she doesn't hear much talk about fruit or grain.  She doesn't believe that I eat enough in the morning which leads to a blood sugar drop by lunch that I just can't catch up with.  She gave me a bunch of handouts and talked through some food choices - she doesn't like red meat and pork, she's big on soy.

Her recommendations/what was going on in my head/what we discussed:
What happened after the appointment:
So with that said let's do our weekly eats: 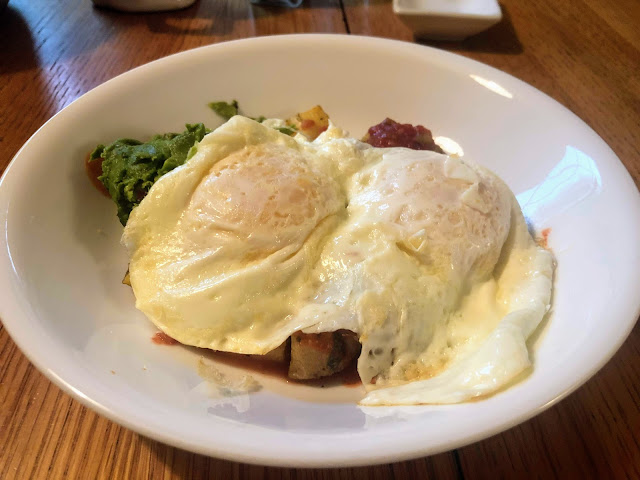 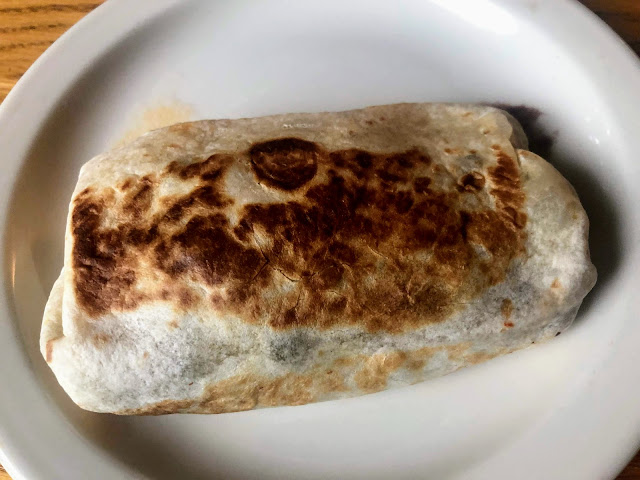 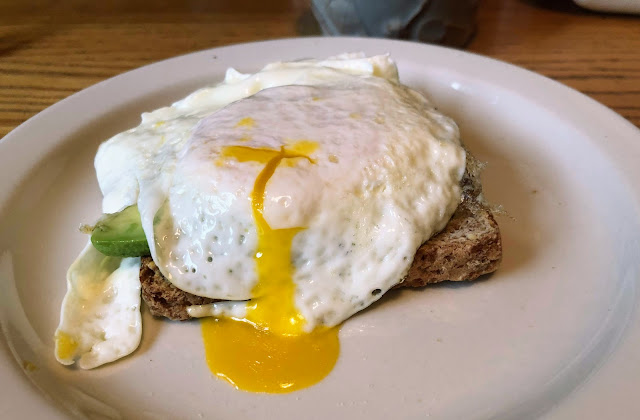 Saturday: Trader Joe's Honey Crunch n' Oats.  I wasn't running that day so I just wanted a lil' something.  I was so hungry after I ate this, so back to what that dietitian was saying... 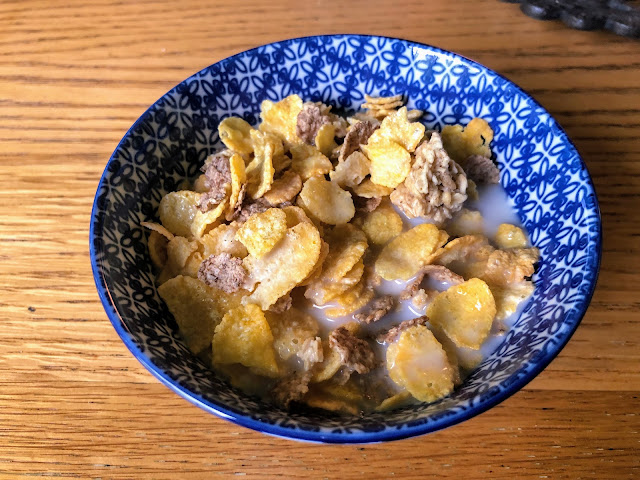 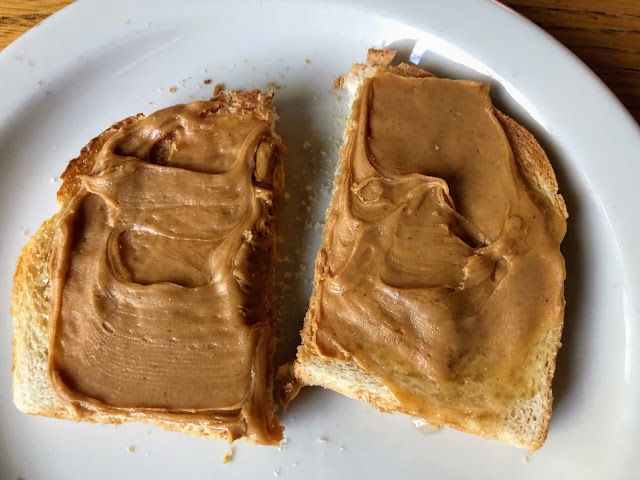 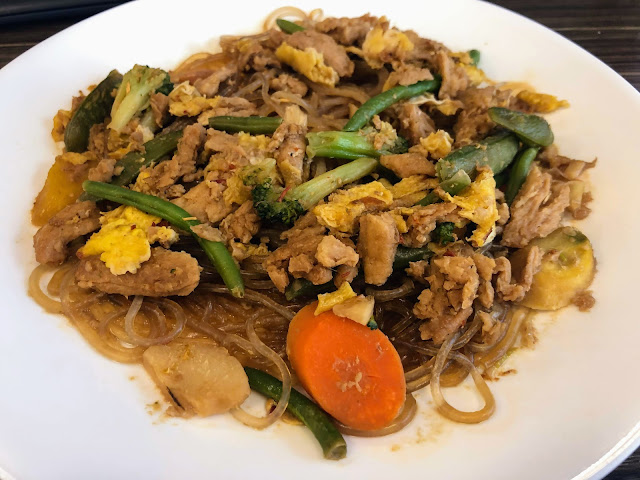 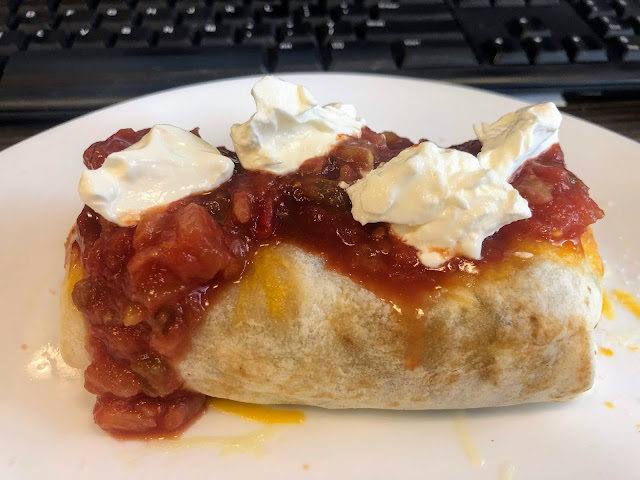 Wednesday: baked ziti and a salad 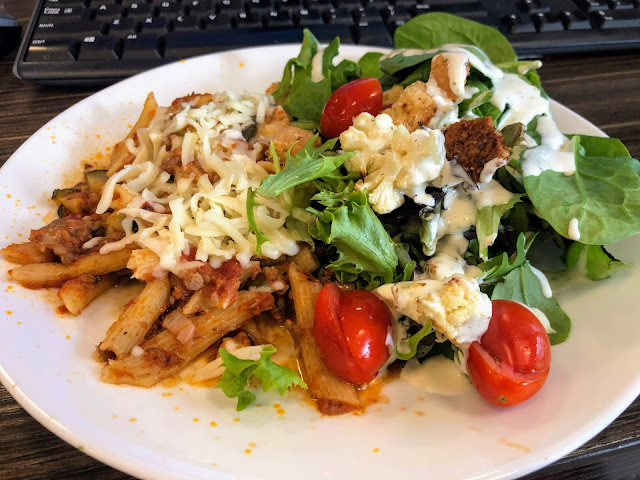 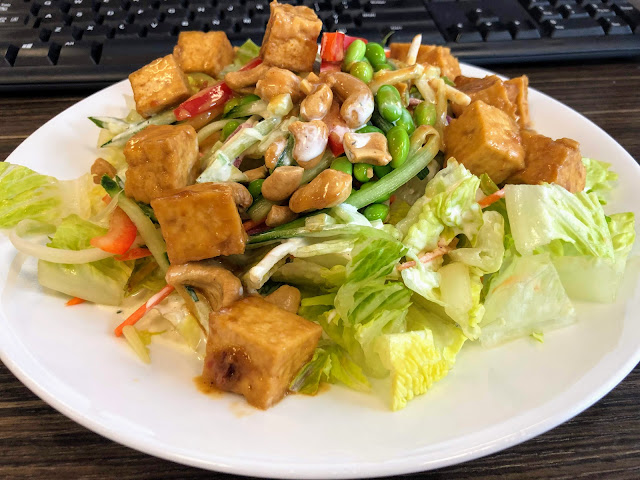 Dinners
Monday (family meal): leftover palooza.  We had 5 mini meatloaves in the freezer, and the leftover pickings from Saturday were 2 twice baked potatoes, and a portobella cap...now just divide that by 3 people....
I'd never had a leftover portobella cap before and I wasn't sure how it would hold up.  I'm so happy to tell you that it was every bit as good as when it came off the grill on Saturday. 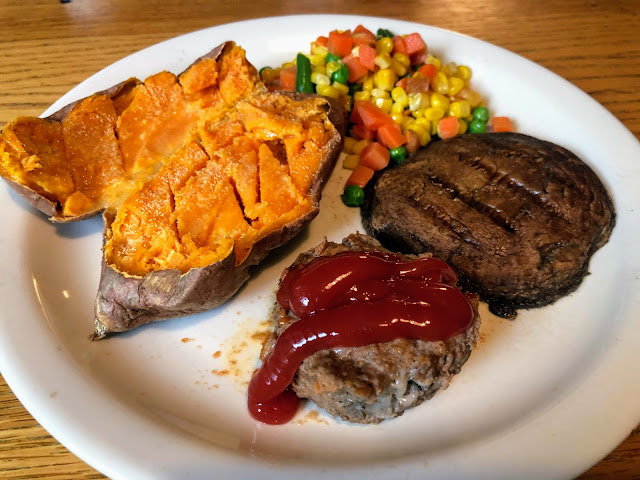 Tuesday (family meal): Costco chicken skewers, veg, cilantro lime rice from the freezer, and avocado.  The backstory on the avocado is that hubs and stepson #2 both eat guac regularly, but plain avocado falls outside of their comfort zones.  Stepson #2 declined, but hubs was feeling adventurous and agreed to try it ==> he was a happy man. 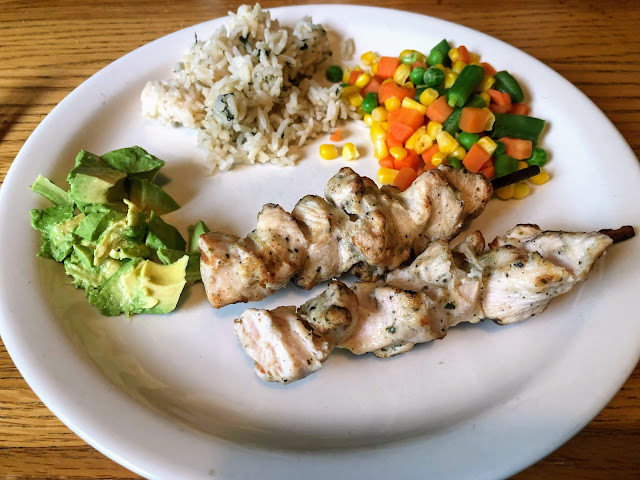 Wednesday (date night): Chicken parm aka hubs favorite meal in the world aka the easiest meal in the world to cook especially in the air fryer aka the meal that everyone in our house eats without complaint and I really need to make it more often. 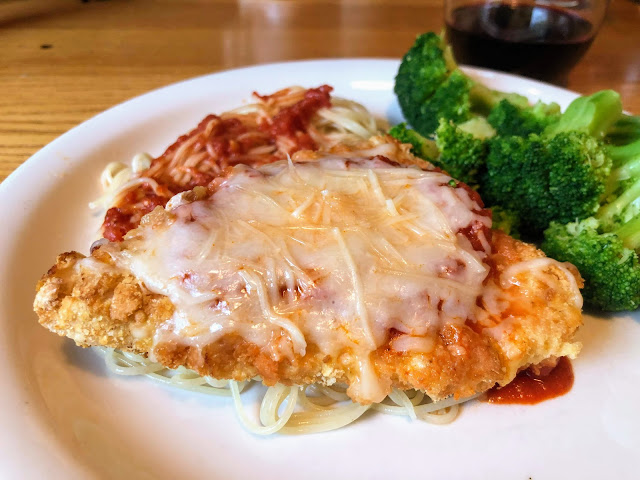 Thursday (fend for yourself night): a concoction of an air fried flounder filet, cilantro lime rice, Costco stir fry veggies, avocado, sushi ginger, and a bit of dressing and crunchies from an Asian salad kit.  Yum. 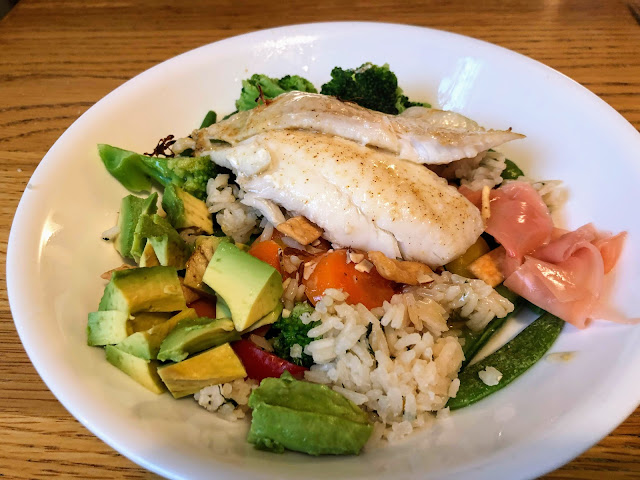 Friday (family night out): hit up a friend's graduation par-tay.  Fried chicken (for the menfolk, I can't stand it) and buffalo mac & cheese (yum, need to make at home ASAP).

Saturday (family birthday party): Headed over to one of the SIL's for a cousin's bday.  Chicken, jojos, pizza.  And cake. 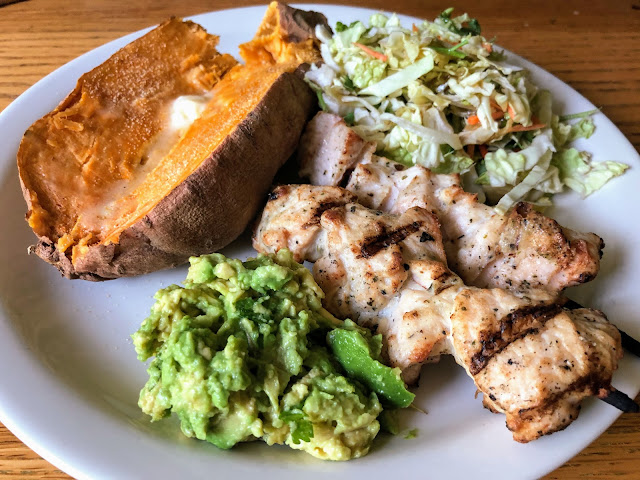 Trader Joe's Haul Deets
Workouts
26.4 miles of running total.  It's week 1 of 10 of this speed plan, adapted for Sunday's 10k.  I started the week with a super awkward double Garmin situation...I set up the workouts on the F35 and used the F305 to track my speed.  The F35 doesn't show speed when it's in workout mode and the F305 is just too darn complicated to set up workouts on (yes I tried). 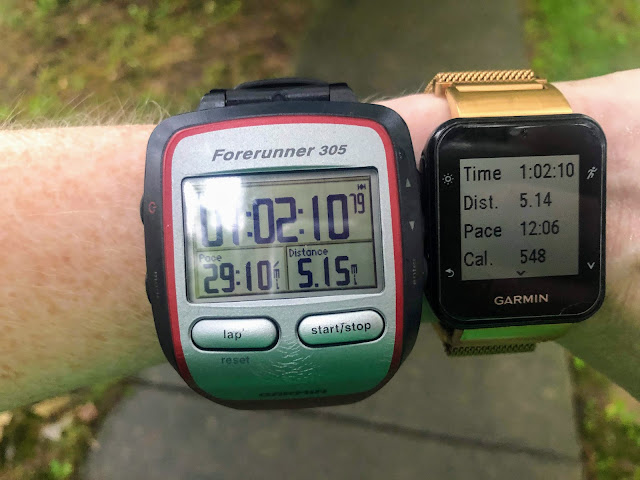 In theory I could have tracked these workouts in my head but at 6AM before coffee it's too hard to remember if I'm in repeat 3 or repeat 4 and whether the 3 minute interval is over at 32 minutes or 33 minutes...you get the idea.

Wednesday: normally a rest day, but I did 3 miles because (1) the plan called for a short run and (2) I had a new to me Garmin to try out.  Yes it's nice to sleep in a bit on Wednesdays but this run felt good. Weights at lunch. 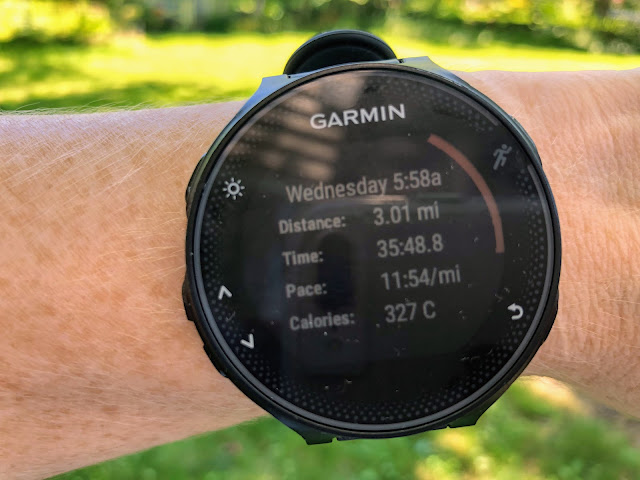 Thursday: 5 miles with 4 x 5 minutes speed/2 min recover.  Or YASS THANK U GARMIN F235...I told my watch to tell me what to do and how fast to do it and it worked like a dream.  No guesswork.

Friday: 3 miles with 5 x 10 second sprint/1 min recover...this one was easy enough to do in my head.  Weights at lunch (pats self on back for 2nd consecutive week of 3x weight training).

Sunday: 10k...yeah it did not go well.  Maybe the change in my training, maybe the cutback in calories (though I ate plenty on Saturday), maybe it was the hot weather (my nemesis) but I was ready to throw in the towel after mile 2.  I also think the psychology of a bad half marathon and the expectation of a PR played a role.  Question for the folks: when a race goes badly, do you stay in or drop out?  I stayed, but I wonder if it would have been better to just call it a day.  All I can say is that it wasn't my slowest 10k.  I'll take a minute to lick my wounds and I'll get back at it.

On a positive note, I've figured out what people mean when they talk about the Running Community.  I saw so many people wearing the shirts from the 10 mile race and recognized a bunch of people from the half marathon.  (P.S. every time I have a conversation with someone who ran that day, they keep increasing the temperature.  At first everyone said it was 85, last week someone said it was 87, this morning someone said 88...can I get a 90?  Look it was Too Hot by any measure but the inflation is funny and I really appreciate it).

Watching
Eh, not much.  Nibbling at some Married at First Sight.

Posted by Birchwood Pie at 6:48 PM