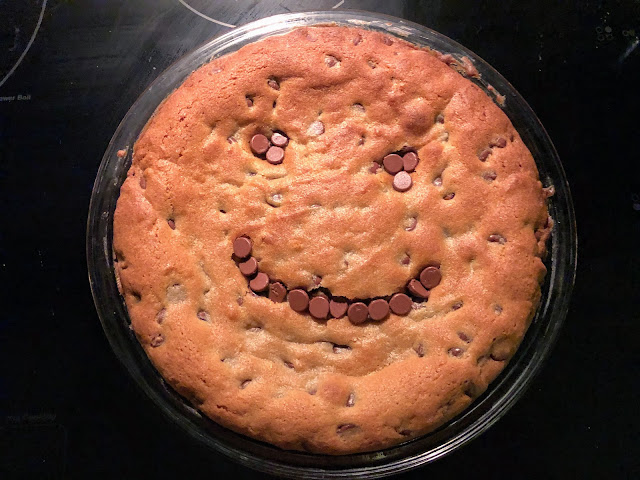 A weekly round up: eats, watches, and reads.  In this week's edition, I tried air frying tofu for the first time (yep it's a winner), went to Trader Joe's, and took a shot at decorating a chocolate chip cookie cake.

All I have to say about my cake decorating skills is it's a good thing I have a CPA license;-) 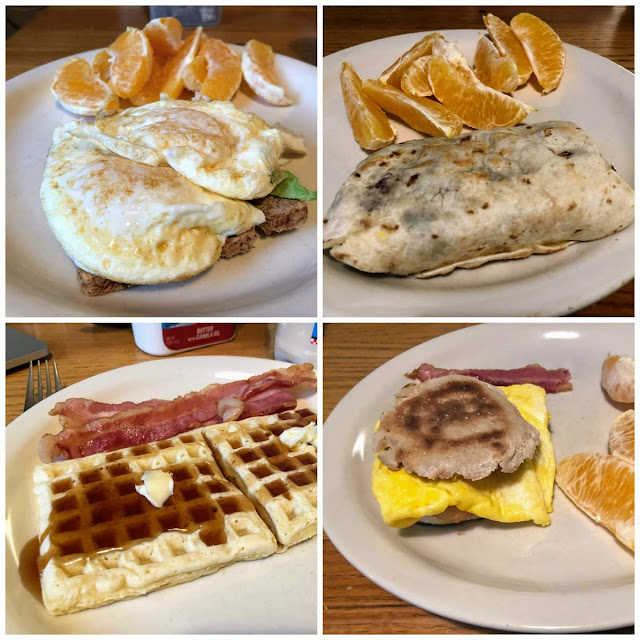 Lunches
Monday, Wednesday, Thursday: lunch at work, bunch of nothing

Tuesday and Friday: a quickie thai curry.  I didn't get around to making this last weekend, so I threw it together on Monday night.  Air fried tofu + Costco stir fry veggies + udon noodles + a bottle of red thai curry sauce from Trader Joe's that I'd had hanging around for ever. 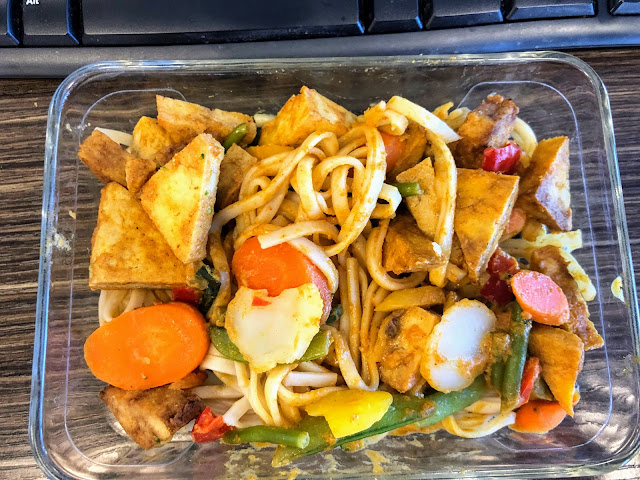 Thoughts: air frying is the way to go for tofu (I just sprayed it with a little oil and seasoned salt and cooked at 390 for about 6-8 minutes).  It would have been better if I'd made the sauce from scratch, which is barely more difficult than opening a bottle of TJ's sauce, and the first taste was nothing special.  But the leftovers were spectacular.

Saturday: Julie posted about Iowa Girl's Thai Crunch Salad and I knew it was a must make. 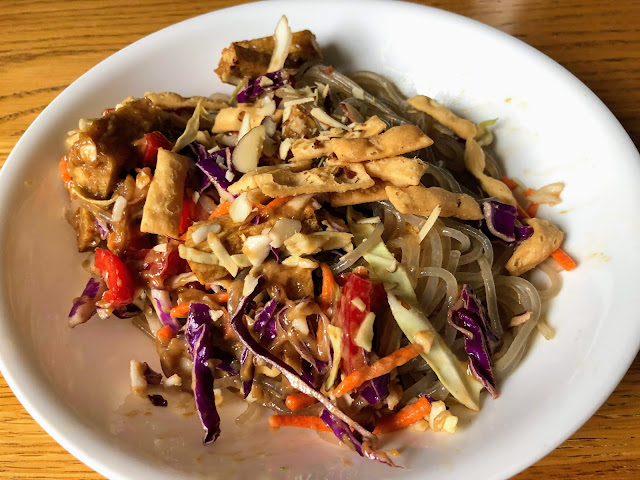 What I did: since I was coming off a long run, I wanted this to be more than a salad so I added glass noodles and air fried a pound of tofu, plus Trader Joe's slaw mix and a red pepper.  I made double the sauce.  When I make this again, I *might* add some chili sauce to the dressing, or I might just make it exactly as written again.

Verdict: Yum and looking forward to the leftovers next week.

Sunday: we had adult cousins in town, so we met up at SIL#3's for brunch. 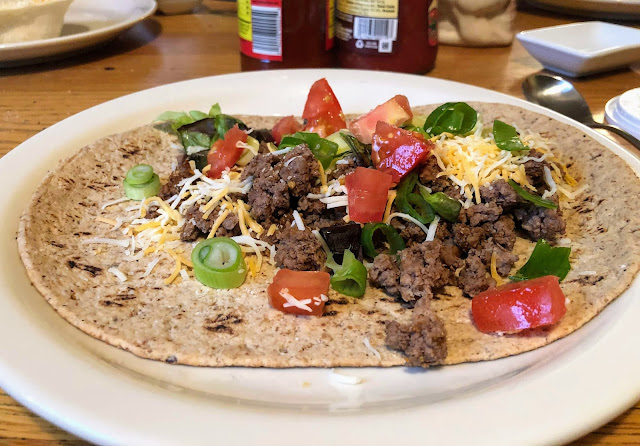 Tuesday (night out): we had a Pampered Chef party at work and made Pasta Primavera with chicken.  This was interesting because our host made the pasta in the microwave.  I wouldn't say that it's faster than the stove, but it's just as good and handy if you only have a microwave (P.S. at some point in the next few years we're going to redo our kitchen and I bet there will be a lot of microwave pasta cooking while our stove is gone).

Wednesday (date night): the classic grilled cheese and tomato soup.  My husband was sick this week so I told him to stay on the couch while I did the cooking (usually grilled cheese is his specialty). 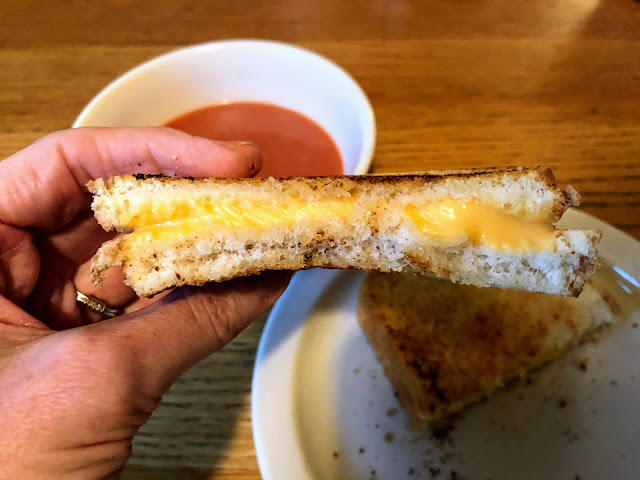 Thursday and Friday (date nights): Chicken parm.  I gave hubs pasta and marinara, I cleaned up the last of the boursin pasta I made last week. 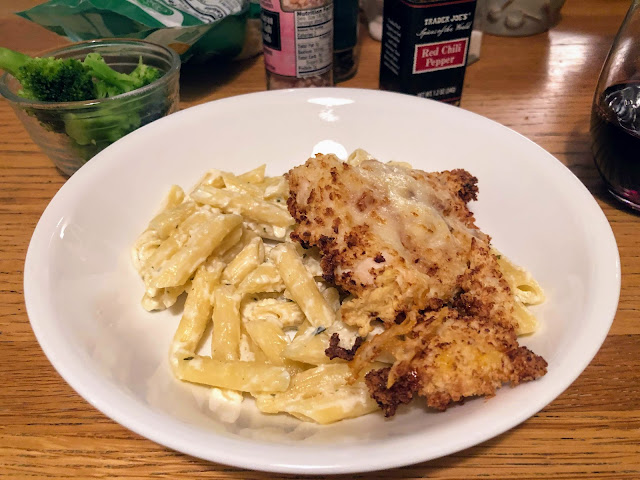 Saturday (date night #4): hubs was starting to feel better but it was my long run day, so both of us were couch bound that night.  We got Chipotle.

Sunday (family meal): a compromise.  My husband likes Rotisserie chicken, I can't stand it.  I like salmon, my husband can't stand it.  I don't like having the same meal 3 nights in a row, which often happens in the blur that is our Sunday-Monday-Tuesday block, but hubs doesn't mind and it makes those nights much easier for him when he doesn't have to figure out dinner. 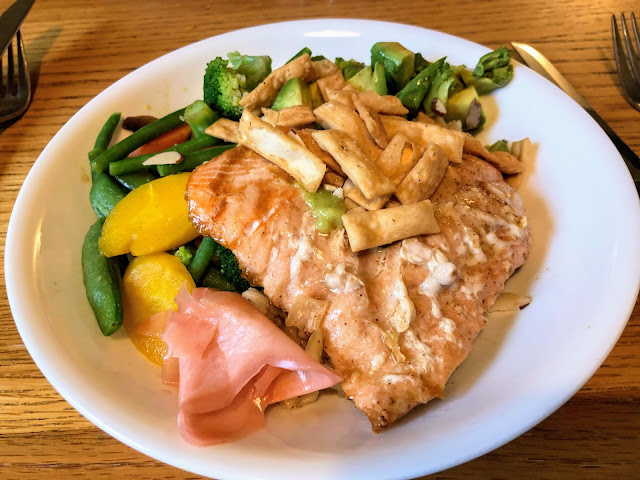 So what I'm getting at it that is I picked up a Rotisserie chicken from the store and pulled some cilantro lime rice and broccoli out of the freezer and handed them over to my husband.  I had a salmon bowl (the "recipe" is a base of rice, Costco stir fry veggies, avocado, sushi ginger, air fried salmon fillet, and Skinny Taste dressing.  Everyone was happy and there was cookie cake for dessert. 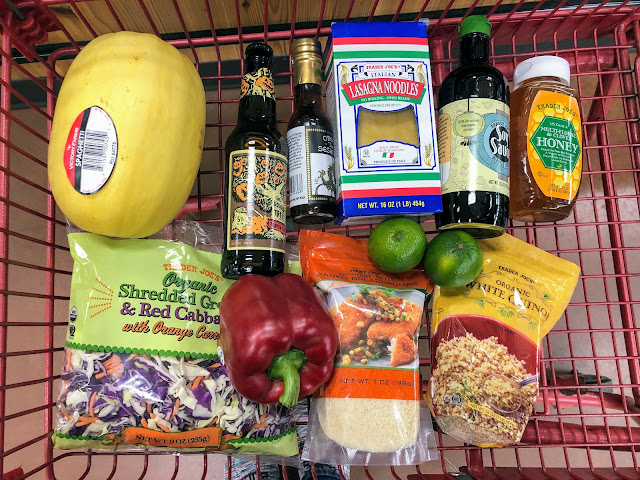 Another fairly low budget run of staples: shredded cabbage mix, red pepper, limes, low sodium soy sauce, honey, sesame oil, lasagna noodles, panko, a spaghetti squash (I didn't get around to cooking it this weekend but have it slated for next weekend), and quinoa (not my fav but I came across a recipe that looks interesting) and one bottle of pumpkin cider to try.

Tragedy: they were out of smashing s'mores.

Watching
Reading
Eh, my reading life has taken a dive lately.  I read a thriller that was kinda like My Lovely Wife, and it was good enough to finish but really you should just read My Lovely Wife instead.  ISO of something good.
Posted by Birchwood Pie at 8:20 PM