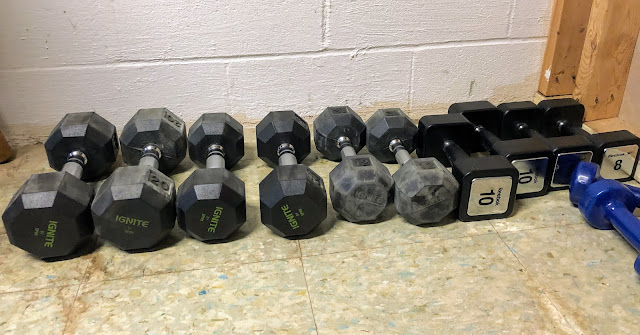 In this week's fitness news, I ran 20 miles and got in 3 weight workouts.  But there's so much more to say than that.

Now I'm fully recovered from half marathons and colds, I've decided to take a break from distance and focus on speed from until mid Jan/early Feb when I start training for my next half.  As much as I love distance running, there's something really freeing about "just" running 3-4 miles that I'm really digging right now.  And I'm also channeling some of the extra energy into weight lifting, and that's a nice change up as well.

Monday: no running, I needed the break since I ran on Sunday.  Weights at lunch.

Thursday: 4 treadmill miles: 1 mile warm up, 6 x .25 miles fast/0.25 miles recover.  The funny story here is that when I first woke up I thought it was Friday and was dreading the hill workout that I had planned for that day.  What a relief when my head cleared and I realized it was "only" Thursday and "just" another speed workout day.

Friday: 3 treadmill hill miles, weights at lunch.  I hadn't done a tready hill run since before the half but my body snapped back to it fairly easily.

Saturday: 6 miles outside in crazy sunshine.  One thing that I love about winter running is that there's no time pressure to get out the door early.  It was high 20's when I woke up and I lazed around until later in the morning when the temps got into the high 30s.  And oh yes since I'm just running 6 instead of 10 that makes it easier to go later as well.

Sunday: off.  Yes it would be nice to get outside for another run, but I've realized that it's also nice to start Mondays with a good sweat (I've said this a billion times before on the blog, but I do not run outside on weekday mornings from Sept - March b/c it's just too dark to see where I'm going)

Weight Lifting Roundup
Lifting has been going really well lately.  I'm still doing the pay for pushup thing that I talked about a last month and I've got a bit of extra upper body strength to show for it ("a bit of extra" = a long way to go but so much better than I was).

I'm not an expert in anything let alone weight lifting, but these things are true for me:
An issue I've run into with blogging about my weight lifting routines is that I only want to share links for stuff that's really good.  There are a few instances on this blog where I've tried a routine for a few times==>thought it was the greatest thing ever==>shared the link==>after a few more times realized that it wasn't right for me==>backtracked, so that's why I rarely share specifics anymore.  I try to alternate between a "real" workout that someone's posted on the internet and my own made up routines of exercises that I like.

So here are some all time favorite lifting routines from the internet and elsewhere:
Your Turn
What are some of your favorite weight workouts? (p.s. please share the links)  Runners, do you struggle to get the lifting in?