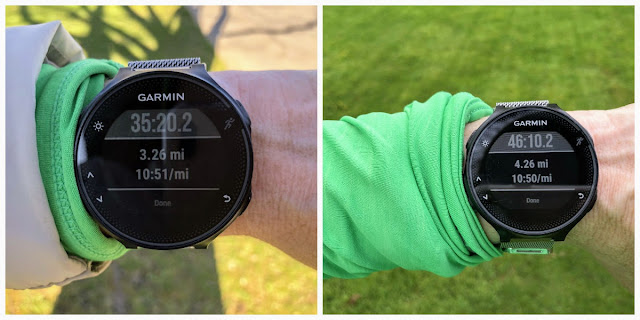 Let's start with a joke: how do you know that someone just ran a virtual half marathon last week?
Answer: they'll tell you.

Monday: I've taken 3 days off running with each of my previous half marathons, and Monday was 2 days out.  I felt pretty good and seriously thought about running, but as I went through my weight workout, my legs told me "nah, slow your roll, it'll be there tomorrow".

Tuesday: my legs were right.  Now that it was tomorrow, running was still there and I did an easy 3.25 miles at an 11:55 pace.  Usually I don't call out paces for everyday runs here (that's what Instragram is for), but anything under 12:xx is always cause for celebration and spoiler, I'm setting the context for what happened next.

Wednesday: I set out for another easy 3.25 miles and that's when the OMG happened.  After the first half mile I didn't feel particularly great, and tried to distract myself by increasing my cadence.  After about 0.0001 seconds my head went to runners land and I could not tell you anything that happened between then and the time my watch beeped for the first mile.  I glanced down and saw and 11:12 pace, which isn't impossible but it's pretty fast for me so yay.  I continued on and took a peak half a mile later...10:45???  That's faster than my 10k pace, I just don't see 10:xx outside of speed work or races.  I continued on at the same effort, not trying to bust a gut but also not taking it easy and held the pace for the 2nd mile.  And then pulled off an even faster mile 3 and yes I pushed it for the final quarter mile.

Thursday: I was torn between doing another short run and taking a rest day, by a narrow margin I decided that a rest day was in order.

Friday: Two things happened.  I hit the weights first thing, and it's no secret that I only do weights because I'm "supposed to" (a.k.a I know I will get injured if I don't), it's not where my passion lies.  But I had a great weight workout.  And then I laced up for another easy, short run and....OH SNAP IT HAPPENED AGAIN!  I swear to you that I tried to slow down for mile 2.  Mile 4?  Ok, by then I was pushing to show off but it wasn't an all out effort, which is what it normally takes to run that pace.

I always say that these weekly recaps are chapters.  The rest of the book hasn't been written so there's no way to tell what's coming next in the story.  Am I finally getting faster or is this just a fluke?  There's no way to tell in the grand scheme of things but I very much enjoyed seeing not one but two 10:xx paced runs this week.  Will the speed continue?  Tune in next week to find out.  Better yet, tune in six months from now to find out.

Saturday: I was craving a long run like nobody's business, so I went out and got 10 miles.  I did not monitor my pace during the run and I deliberately kept it easy.  After mile 8 things got very hard, and I probably should have called it but I kept going.  11:54 for the run, and strangely even though I was dead on my feet I was able to pull off an 11:30 for the final mile.

What's Next
Now that I've had a week to think about it, my current plan is to do another virtual half in mid May, on the weekend of the Big City marathon.  I want to take advantage of the gorgeous spring weather to keep my distance up (hey weather, that's a hint to get gorgeous instead of being cold all the time) and to stick to my original plan of running two half marathons this spring.