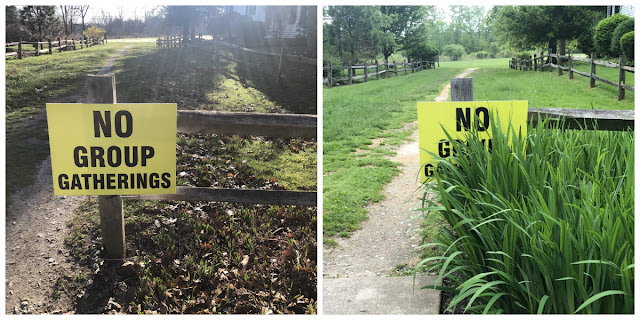 My plan for this week: drop my mileage and hit speed training with a vengeance.

The reality for this week: Holy Heatwave Batman!  I dropped my mileage like a bad habit and that's a fact.  Here are the hits, runs, and errors that went down for 23 miles of running

Three Things That Happened This Week:

1. First heat wave of the year.   I've done more than my share of cold weather complaining recently and I got my comeuppance.  I can't say how hot is too hot for me, but I feel like my temperature max is much lower than the average bear's.  I'm sensitive to heat, I'm sensitive to humidity, and I'm sensitive to sun so I had to drop it down.  I was very set on May being a no treadmill month and I made it but barely.  The forecast for this summer is weekday runs outside/weekend long runs inside.

2. I fell in a freak dog walking accident and skinned the living daylights out of my knee.  This didn't affect running (thank God) but my knee is too banged up to put weight on it so I used this an excuse to skip weight training this week apart from some pushups here and there.

3.  I got new running shoes and I'm not sure if I like them.  My grand plan to celebrate my state's reopening was to trek down to my local running shoe store and try on All Of The Brooks.  I've been happily running in Launch for a while BUT I've heard that it's good to have more than one kind of shoe. Launch is an "energy returning shoe" meaning that it's a bit firmer, and sometimes my feet do feel a bit beat up so I was in the market for something a bit softer for easy days.  In particular I've been hearing a lot of raves about Ghost, so much so that I was convinced that I didn't need to look further but I tried on a pair of Glycerin just for kicks...and ooh the Ghost never stood a chance after that (actually both shoes felt very similar, it's just that the Glycerin had a little more toe room).

I gleefully took the Glycerin out for an easy 3 miler and was quite happy, so I took them out for my long run and oh things took a turn.  After the 3 mile mark I really started to feel it in my hips and thighs and I don't mean in a good way.  I was stunned at the difference.  I'll use the Glycerin for the short easy stuff and I cannot wait to put my Launch back on.

Monday: 4.25 miles.  I knew from the forecast that the weather was going to be 🔥🔥🔥 and I used the "if I don't look at the temperature it won't affect me" approach.  Ignorance was not bliss.  I was very determined to do my normal Monday workout of 4 easy miles with strides and I did but I should have shut things down at 3 miles.  Nothing good happens after 3 miles in hot weather for me.

Tuesday: I would have loved to bust out some mile repeats...and I also learned my lesson from the previous day and took the weather into account.  3.25 miles easy, it wasn't too bad until the end.  Also worth noting is that I took a salt tablet before the run.  I can't say from one use if it made a difference but it sure didn't hurt anything.

Thursday: The "yay" workout of the week.  You cannot judge the weather by anything except going outside and being in it.  According to the internet it was 2 degrees cooler than the previous days but it was a world of difference.  There was cloud cover and it was raining and it was absolutely delightful.

My planned workout was 4 x 400 @ <9:30 pace on a flat walking trail.  The rain made the trail a no-go so I rerouted to a cul-de-sac.  My first interval was way slow and I shrugged it off and let the Garmin beep away in protest.  If today was not my day then so be it.  I was halfway through the second interval when it dawned on me that my watch wasn't beeping, could it be that I was on pace?  Yes, yes I was.  And stayed there for the rest of the workout.  I ended up with 5.25 miles and made myself stop and rest on my laurels even though I kind of wanted to keep going.

Friday: the heat returned with a vengeance, I shrugged and said "no big, I'll just do 3.25 easy" and I did.  This was my first run with the Glycerin.

Saturday: was just not my day.  The temps were in the mid 50s so in theory it should have been perfect, but it was too humid/sunny/whatever the heck it is that makes summer running so miserable.  I was already struggling at 3 miles and that's when I realized that the wheels on the bus (my new shoes) were different and not in a good way.  Plan A was 8 miles and I knew that I would be cutting it short, so I negotiated 6 and then I thought that I would do 6.55 (half of a half) and then it made sense to just keep going and get 7.  Runner's logic my friends.  Fun fact, Smashrun tells me that this was only the 6th time that I've run 7 miles (BTW, if you're on Strava you know that they've really cut back on the free features and are pushing their paid subscriptions like nobody's business...no offense to Strava but this kind of makes me want to check out Smashrun's pro features).

Race News?
I think racing is coming back in my state.  A local race company sent out an email about summer 5ks.  The race closest to me has the disclaimer that it's limited to 250 people.  I'm not rushing to sign up for the same reason that I wouldn't be racing in a normal summer: heat.

Boston folded but my local marathon insists that the race is going on unless something very bad happens.  They say that they are working with the city and have a plan to make it happen on the scheduled race date in September.  On the one hand I don't believe them but on the other hand I kind of believe them???

What I can tell you for sure is that gyms and non-contact sports resumed this week and I never thought that I would be so happy to see kids on a baseball field.
Posted by Birchwood Pie at 10:21 AM