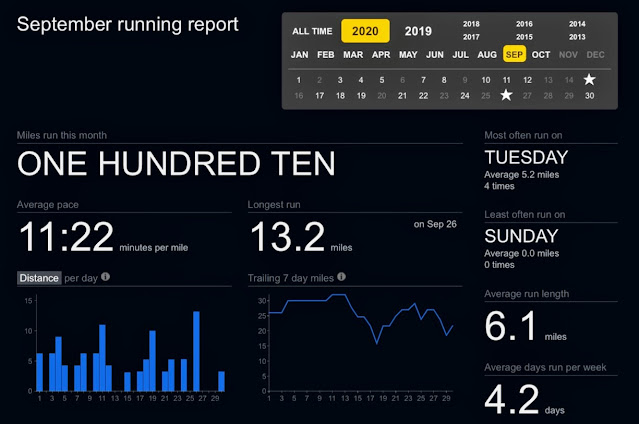 On the surface it would seem like not a lot happened this week.  I spent a fair amount of time basking in the (virtual) post half marathon glow, I took a few days off, and ended up with 19.25 miles in my running bank.  It doesn't seem like there is anything to write about this week....ha ha just kidding we have a ton of stuff to talk about.
I'm linking up with the Weekly Run Down, please head over to Kim and Deborah to check it out.

Here's what's going down in my running world:

Monday: off, no way was I read to run after Saturday's half.

Tuesday: I was on the fence about whether I was ready to run and ended up on the "it'll be there tomorrow" side.

Wednesday: still on the fence but landed on the "if not now when" side.  3.25 miles easy, just dipping my toe back in the water and remembering what running feels like.  Yeah, good stuff.

Thursday: Fartlek day!  I did a 50 minute run that consisted of 15 min warmup/cooldown (I chose 15 minutes b/c that's the time it takes to get to "Speedwork Park" a.k.a. the park in my neighborhood with the flat walking trail) and 10x 1 min @ slightly faster than 5k pace & 1 min recover. I felt pretty sluggish in the warmup but once I started the workout I was flying and having a lot of trouble slowing down, so yes I was too fast but I'm really not mad about it.  4.4 miles total.

Friday: it's well known that I love running in the rain, but when it's icy cold and a raging downpour, maybe not so much.  I procrastinated long enough for the rain to clear up so I went for it and got 3.25 easy miles and life was good.

Saturday: Plan A was 6 miles, but I had also made plans to meet my running friends on Sunday so I knew that I needed to save something.  I called it at 4.25 miles BUT I also threw a good bit of uphill in there.

Sunday: Group run!  Now that school has started it just doesn't work to meet my running friends on weekdays anymore so I hadn't seen them in forever.  We set out for 3 miles, which ended up being run walk since a member of the group is coming off an injury.  It was exactly 3.1 to get back to our starting point, which was all well and good but we were still chatting and it was a bit chilly to be outside standing still so naturally we did an extra mile (for every problem there is a solution).

So what's happening five months later?  September is always "not my best month as a runner".  I spend the whole summer battling heat and by September all the fight is knocked out of me and I always feel woefully unprepared for the half that I run late in the month.  September was similar to the two Aprils in terms of mileage and races.

So I was shocked, shocked to see that my average pace in September including all of those mornings when I couldn't hardly even was...11:22  Things are happening in the speed department (I still believe all of the things that I wrote about in that post to be true with regards to my speed, except that group running is now a part of my life and yes it helps.)

Ok, we're 7 days out from half marathon #6 and the live event is still scheduled to take place...seems like it's really happening this time.  Our COVID situation seems to be "good" relatively speaking.

The 10 mile race that was supposed to be held 2 weeks after the half is a no.  Racing is back in the suburbs, but the Big City isn't issuing race permits so that's why the 10 miler is a no-go.  They gave us the option of virtual or deferring to next year.  Running so many long races in October was going to be a stretch for me to start with (the schedule clump was due to pandemic rescheduling), so this is one cancellation that I'm not disappointed by.  See ya next year, 10 mile race!

And the Christmas themed 10k in the Big City was also cancelled outright and registration refunded so once next Sunday's half is done, I will no longer be registered for any 2020 races.  My goal for 2020 was to run 12 races and as of next Sunday I will have run 9, so yes I will be running at least 3 more races this year but TBD if they will be "real" races or "real virtual" races.