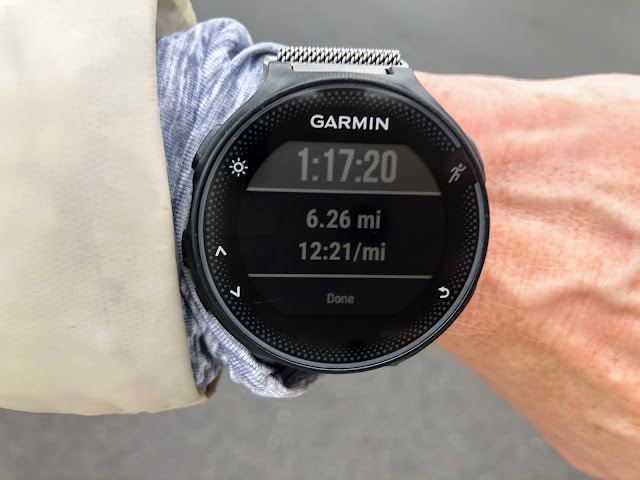 Going into the last week of the year, I was already at record annual mileage, so I made the most of it and "sandbagged" with lower volume runs and an extra rest day.  22 miles this week and hey-o I'm still hitting the weights.

FYI. my annual State of the Run post is here.

Monday: weights and 4.25 miles outside.  Sadly my legs did not want to move, so the run was an exercise in going through the motions.

Friday: New Year New Miles!  And thanks for asking I started it right by getting the weights in first. Also...New Year New Ice Storm so...hey treadmill! 4 miles.

Saturday: For no reason that I can think of, I just plain could not sleep so it was a write-off day for doing anything useful.  Even though I felt like a wreck, my body was down to move and the ice was gone so I went for it and ended up with 6.25 miles.

I'm heading in the direction of more mileage.   There's no formal speed plan right now but there will be a lot of "minute fast/minute slow" stuff.  Unfortunately (and predictably) winter is doing its thing, so my routine is going to be a little erratic for the next few months as I bounce back and forth between inside and outside running.  Race wise I'm registered for a 10 miler in April (deferred from last year) and a half in May.

Athlete Crush of the Week

Kathrine Switzer!!!  I'm listening to audio version of her book Marathon Woman and IMO it's a must read (or in my case a must listen).  If you had asked me who she was before I started reading her book, I would have told you that she was the first woman to run Boston and that she got pulled off the course, which isn't quite correct...she was the first woman to officially register for Boston (women "didn't run marathons" at the time) but a few had bandited the course.  There was no rule stating that you had to be male and she often used "K. Switzer" as her name on paperwork, so it's fair enough to say that they didn't ask, she didn't tell, and she paid her $3 entry fee just like everyone else.  Race officials tried but were not successful in removing her from the course.  And that's just the beginning of her story!