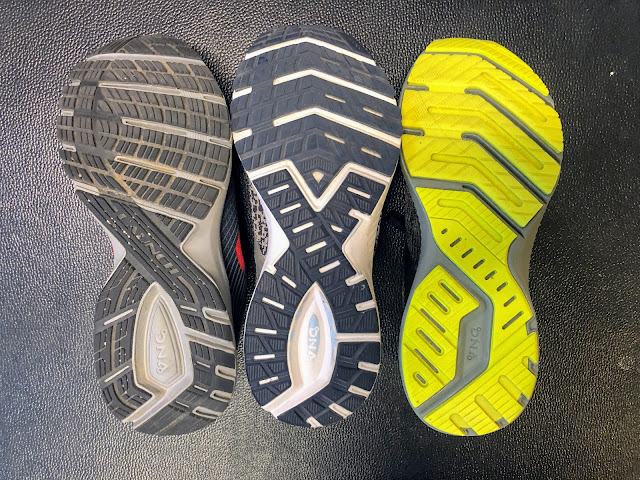 In this weeks' news: 31.5 treadmill miles, 3 strength workouts, and first (highly positive) impressions of the Launch 8.

Last week's cutback had the desired effect.  I was able to ramp right back up to my normal training load and soak in the fitness like a sponge.  Weather wise we've had more cold and more ice so I'm on target for my prediction of an all-indoor February.

On the positive side, I'm feeling very strong when I run.  My body isn't just keeping up with the treadmill, it's giving it a run for its money.  Obviously if I could be outside I would be outside BUT now that my body has accepted the treadmill I have to say that treadmill running is much less stressful on the body than running outside, and I'm soaking that up while I have it.  I'm also continuing to do two very slow runs each week.  I'll do the occasional speed burst here and there to pass the time but I really haven't felt like doing speed work yet and frankly I may not bother until I can get back outside again.  I feel like speed work off the treadmill is much more beneficial than speed work on the treadmill.  I also don't plan to run anything longer than 8 miles on the treadmill right now, on the theory that long runs off the treadmill are a word of difference than long run on the treadmill.  Within those parameters I'm getting a ton of mileage that feels good, what more could a runner want?

The only cloud on the horizon is that a few weeks ago I was rummaging around in a closet and something fell off the top shelf and landed on top of my right foot.  At the time it hurt and I could see a lump on my foot but things settled down and I forgot about it.  Fast forward to last week and I realize now why the shoes that I tried out that were just a little too tight bothered my foot so much.  The lump is still there and it's acting up.  I don't feel it while I'm running but it's continuing to talk smack to me and if it doesn't settle down in a big hurry Ima get a second opinion on it.  Hopefully it's nothing but if it turns out to be something I don't want to be all "hey I have a foot thing that's been going on for a while that I didn't mention before" so I'm mentioning it (and if I never mention it again, the reason will be that it turned out to be nothing).

Thursday: new day, nu shooz.  Took my nice shinny new Launch 8 out of the box and put them to work for 6.3 miles.  I was able to maintain a pattern of 30 seconds fast/90 seconds slow.

Friday: strength and 4.3 slow miles in my old shoes.

Saturday: long run day @ 7 miles, treated myself to my 2nd run in the Launch 8.

Sunday: closed out the week with 3.3 miles in my old shoes.

Because we have a moment, lemme tell you about my history with running shoes.  TL&DR, scroll down to the pictures where I start rambling about the Launch 8 or TL&DR see you next week;-)  When I started running I was on a budget and not running very much, so I put zero effort into shoes.  I went with whatever sneakers I could get for the cheapest that I could get them.  A few years into my running journey I started hearing chatter about shoes and spied a deal on a pair of Big Deal Brand Name shoes online and snapped them up.  This is most definitely not a recommended way to buy shoes BUT by fate these were the perfect shoes for me.  After I don't know, 3 or 4 YEARS it dawned on me that hmm, you aren't supposed to keep running shoes forever so I got another pair of the same brand and they just didn't have the magic of the original pair.  Eventually I made my first visit to a running store and got matched again with the latest model of the same brand, which were also my first pair of men's shoes (as discussed last week I have wide width feet and shoe brands are not exactly flooding the market with wide width shoes so lucky for me that there is an entire gender with wide feet).

As someone who reads a lot of running blogs, I of course heard a lot of raves about Brooks, and at one point all of the cool bloggers were raving about a pair of cute walking shoes, so I decided to try them and they were horrible.  The shoes had a weird insert that was incompatible with my foot.  I wore the shoes to work, so I did nothing more than walk to and from my car and sit around in an office in them and they hurt my feet terribly.  It literally would have been less painful to wear high heels for the day.  So the shoes went back from whence they came and I wrote off the entire Brooks brand as an influencer scam.

The Big Deal Big Name Brand shoes and I fell out once I got into half marathon territory.  With the increased mileage I found that I had to be fanatical about keeping my toenails trimmed and let me tell you that I am very enthusiastic about many things but toenail trimming is not one of them.  In the early days of doing 8-10 mile runs my feet started to hurt and I had to cut a few runs short.  I went back to the running store and told them my tale of woe.  They gave me a selection of Mizunos and Brooks to try on.  I was incredibly skeptical of Brooks but I could not deny that the Launch 5 felt right so I took them home with me.  It was the beginning of a beautiful friendship and FYI I was able to return to being very casual about my toenail trimming.

I can't tell you exactly what the difference is between the 5 & 6, but there is something microscopically different that makes me prefer the 5's.  The 6's are just a touch firmer.  When the 7 came out, the reviews said that the 7's were firmer than the 6's and one particularly snarky review said something along the lines of "you're not kidding that these shoes promote fast turnover because they're so hard you won't want to put your foot on the ground"...whether accurate or not I could not get those words out of my head so now you know why I never got around to trying the 7's.  I didn't have to because there were quite a few 5's still in the marketplace for stupid cheap, so I had my twin loves of the perfect shoe and thrift.  But now the Launch 5 well has run dry and with 300+ miles on both of my existing pairs of shoes, it was time to start looking around and hey, great timing since the Launch 8 came out and the reviews have been quite positive.

From left to right you are looking at: Launch 5 (the shoe in the picture is a retired treadmill shoe that I use for strength training...it's identical to my current outdoor shoes except way less muddy), Launch 6 (current treadmill shoe @ approx 350 miles), and the brand new Launch 8 after 13 miles. 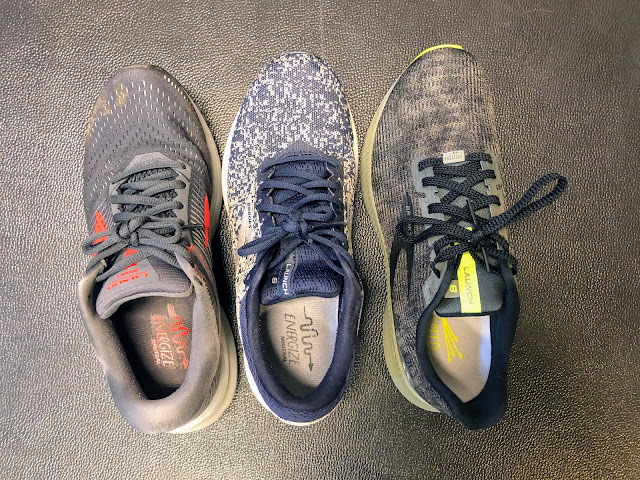 Any review that you read will tell you that the 8 is much more lightweight than previous models and I'm here to confirm that.  You can feel it but I wanted to quantify it so I got out my kitchen scale.  The 5's are 250 grams, the 6's are 258 grams, and the 8's are 223 grams.  I don't know anything about shoe technology, but I'm going to take a wild guess that most of the difference is in the shoe upper.  It's quite thin compared to the previous models, and now that I've tried all three the older shoes feel ridiculously bulky. 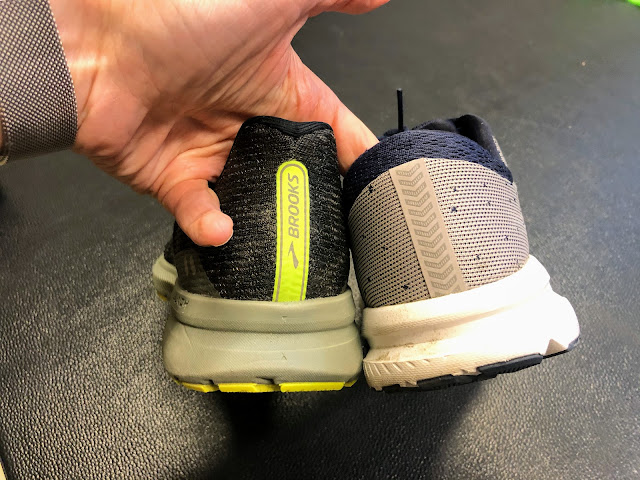 The backs of the new shoes are taller than the previous models, and I was concerned that might be an issue but once I got them on it's not something that I noticed at all so we're good there. 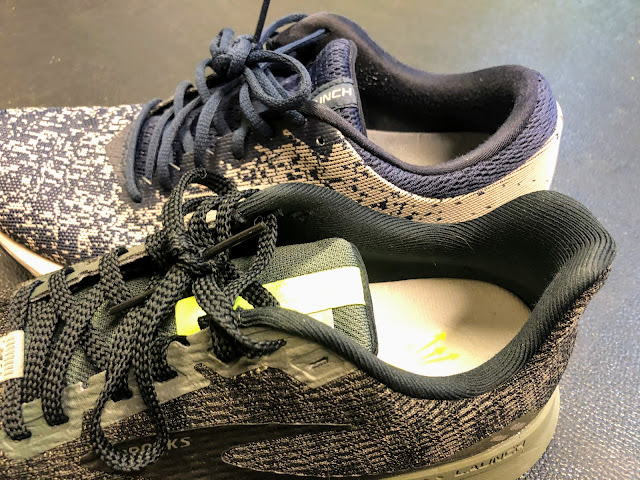 As far as the bottoms of the shoes, you know the things you stand on, that feels really good.  I can't tell yet it the 8's are "better" or if it's just the difference between brand new shoes and shoes with 350 miles on them, but overall I feel springy and peppy which is exactly what I'm looking for.

The verdict for now is that I'm quite happy with the new shoes and if that trend continues I'll be ponying out more cash for more pairs.  For right now I'm going to use the 8's for my longer/faster runs and the older shoes for the short & slow stuff.  Once the weather gets nicer I'll take them outside.

The real point of this story isn't how much I like the new Launch, it's that I'm really glad that I started looking for new shoes before I needed them.  This story could just as easily have gone the other way and the 8's might not have worked out for me which means it would be time to move on and start looking at other shoe brands.  With 150 miles left in my current shoes, I have time to try things out and I don't have to settle. (P.S. if I did have to move on from Brooks I think I would start with New Balance).

Tell me about your favorite shoes!  Any other Launch fans out there?

Posted by Birchwood Pie at 2:10 PM