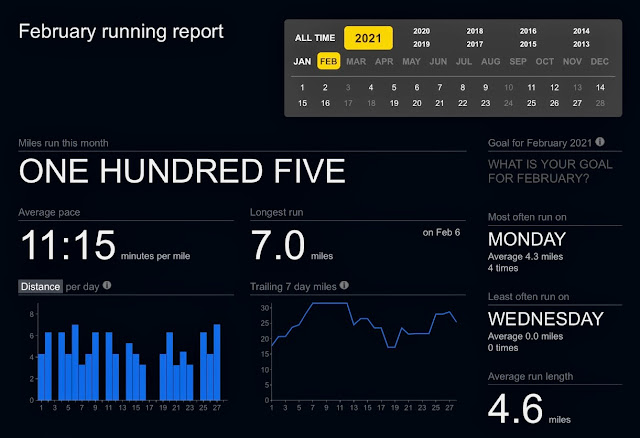 On paper nothing remarkable happened this week.  25.4 miles of running (11.5 of them outside thank you very much!) and one strength workout.  One of the most frustrating things about this winter is that the weather has kept me stuck in a holding pattern where I'm not really working toward anything except keeping my fitness for better days.  Increasingly signs of spring are emerging, and I'll soon be able to start working on my long term goals again instead of just passing the time.

P.S. the screenshot above is from SmashRun.

Monday: 4.5 miles easy.  I enjoyed being back outside very much and having the goal of my run being an easy effort.  Sadly I also realized that morning temperatures of mid 30s are going to mean slick spots on the roads until the snow melts.  Last month I figured out that if the roads are iffy that I can drive to my neighborhood park with a dirt walking trail, but that's currently not an option since it has a foot of snow that will turn into a mudslide once it melts.

Tuesday: hey I'm all about reality...if it's not safe to run outside then my options are the treadmill or not running at all.  I hopped on the tready.  The first mile clicked by and then I had what I refer to as a "treadmill temper tantrum".  I did not want to be on the mill and that was that.  I dragged myself through 3.3 miles and called it a day.  To my credit, that night I did the final workout from my strength program that I wasn't able to do last week when I hurt my back (this was supposed to be a rest week from strength before starting a new phase next week).

Thursday: I had a busy workday on tap and there was not a prayer of being able to run outside.  I surprised myself by getting on the tready dark and early and pounding out 6.3 miles like it was no big deal.

Saturday: FREEDOM!!!!!!!  Out of nowhere it was capri weather AND the stars aligned and I was able to meet up with some running friends.  We went to the same park as this race.  We did 4 miles and were going to call it a day but a few of us decided to stay for "one more mile" which in runner's speak means that we ended up with 7 miles total - but you knew that right;-)

Things From the Week

I knew going in that winter was going to be very hard this year, so I put my head down and barrelled through it.  Kind of.  Now that spring is coming, I'm starting to realize how bad it was and how much better things will get with each passing week.  It was so wonderful to be able to meet up with fellow human beings in person on Saturday like it's a totally normal thing.  It will soon be warm enough for outside family dinners...the kind of things that make our quality of life go up exponentially.

I'm kinda keeping an eye on my heart rate these days.  I've never really been sold on heart rate training because it sounds tedious and honestly pretty stressful to "have" to keep your heartbeat within a certain range.  Yes it's fair to read into that that my heart rate when exercising is pretty high.  The only reason that I'm considering it at all is that my last few 5k averages have been high 180's/low 190's and it makes sense that if I want to get faster that I might have to do something to address that...

Anyhoo, my Monday "easy breezy" run was an average of 172 and my "OMG I hate my life" Tuesday treadmill death march that I ran fast just to get it over with was an average of 164 so getting back to the point that formal heart rate training is probably not something that I am going to pursue.  And the point that heart rate wrist monitors may leave something to be desired in the accuracy department.   I'll continue to do easy runs "just to see what happens" but I don't plan to look at the numbers with any more intensity than I'm doing now.

As I'm emerging from my winter hibernation I'm seeing a world with races in it.  Here's whats on the calendar for March.

The Hilly 15k is a maybe!  My first race cancellation last year was a 15k, and I learned the week before the race that the course is extremely uphill on the back half.  It's so steep that I had to downshift into second to drive it (translation: I have a small car with a manual transmission so on uphills I have to put in physical effort instead of just keeping my foot on the gas).  I love a challenge but hmm if it's difficult to drive the course...

The racing company is very old school and low tech.  After last year's race was cancelled they said they would email registration codes for this year's race, but I didn't get one and other people that I've talked to have had similar issues.  At first I thought that I would just let this race go, since it's only $30 and I'm lukewarm on the course, but my friends are running and I know I'll have FOMO if I sit it out and it would be good for me to run some frickin' hills already.

I reached out to the company to get my race code and they responded but ouch, their technology is terrible so I still don't have the code.  I reached back out for the third time, but I'm wondering if I should take the communication snafu as a "sign" that this race was just not meant to be?

The Chicago Shamrock Shuffle is a yes! For context, we usually go to Chicago to visit my SIL over spring break, which lines up with race day for the Chicago Shamrock Shuffle.  In 2018 we drove by the race and thought that it looked fun.  In 2019 we drove by the race and I realized that DUH instead of watching the race I could be running it!  I registered for 2020 and we know how that turned out - wait, let me clarify that turned out with the company not only refunding registration and also refunding the cost of shipping for my shirt and bib, which I was not expecting since they had already shipped me the goods.

The catch is that the 2021 Shamrock Shuffle is virtual and even if it wasn't we're not going to Chicago this year.  BUT I recently learned that if you run the Shamrock Shuffle 4 years in a row that you have an in for the Chicago marathon which would get me in to the 2025 race.  Which seems like a "sign" because I know that I'm not ready to run a full now but I think I will be in "a few years" which in my head translates to 2025 which is the year that I turn 50.  Long term planning my friends.

The swag bag for the Shamrock shuffle arrived this week and (1) I love the shirt and (2) it tickled me no end that the package included a full size Zone Perfect bar.  The hallmark of my rinky dinky local race company's swag bags are mini Zone Perfect bars.  Nothing like going big or going home.

It is amazing how much things change within a lifetime.  Remember when 50 year olds were...old???  And now 50 seems like the right age to run my first marathon.