Weekly Eats: More of the Same 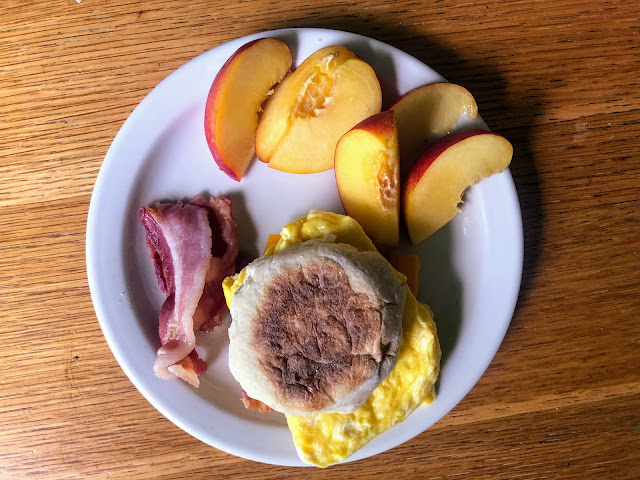 A weekly roundup: eats, workouts, watches, and reads.  I tried a new dinner out on the fam, had more adventures running in the heat, and had a wonderful job interview that I am trying not to get too excited about but I am really excited about.
Breakfasts

After a few weeks of winging it for lunches, I finally made a thai curry with air fried tofu and Costco stir fry veggies last weekend.  The recipe is a hodge-podge of every Thai curry recipe out there. 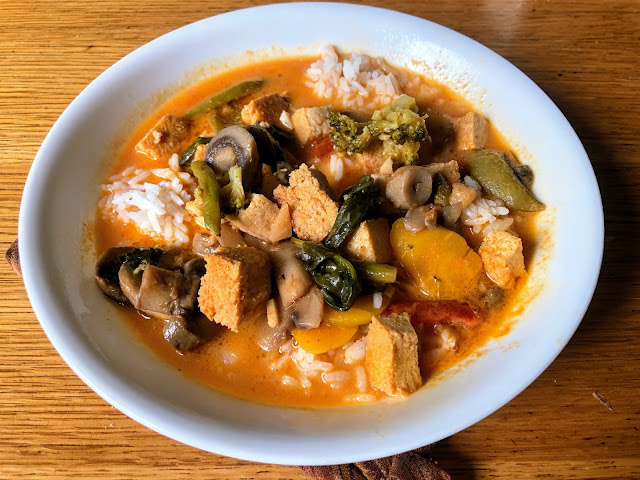 I alternated curry days with eggs over breakfast potatoes.  I guess I should start calling these lunch potatoes, since that's when I eat them these days. 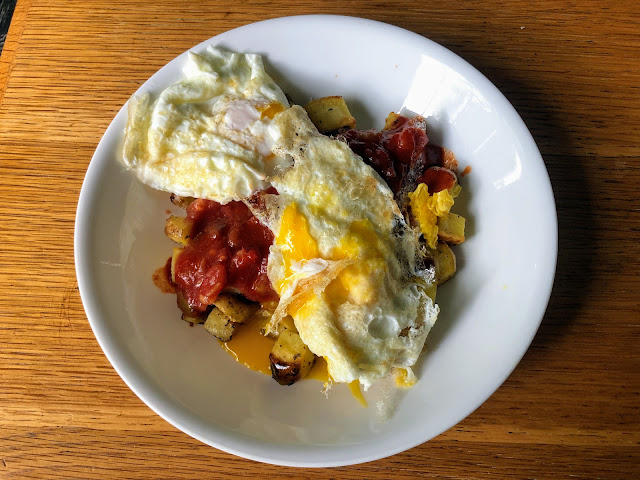 Over the weekend I enjoyed some fine grocery store sushi. 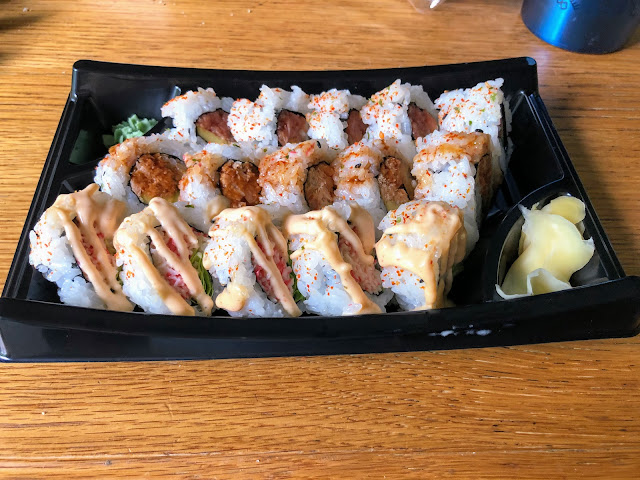 Last weekend Skinny Taste's Veggie Lasagna Stuffed Portabello Mushrooms caught my eye.  I knew that I would like it, but would the family go for it?  And if so how was I going to find time to cook it? 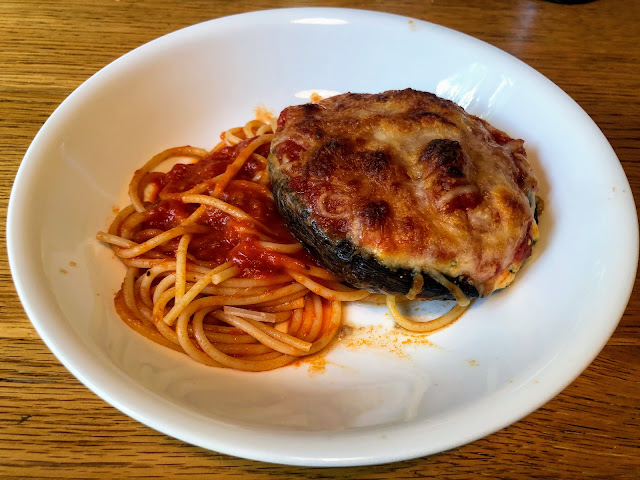 It looked like a good make ahead candidate, so I prepped and stuffed the shrooms on Sunday.  Then on Monday I snuck away from work to throw them in the oven and boiled up some pasta and voila dinner was on the table.

My verdict is that I loved this, but I didn't get either a "yay" or a "nay" from the fam.  Hey, that's what happens when you try new things.

Wednesday: the kids had dinner with their mom, hubs was out on the town, and there were just enough taco fixings to set myself up.

Thursday: was the first day of summer break for the kids, and their "Friday" with us before going to their mom's for the weekend.  So we decided to have our standard "kids" Friday dinner. 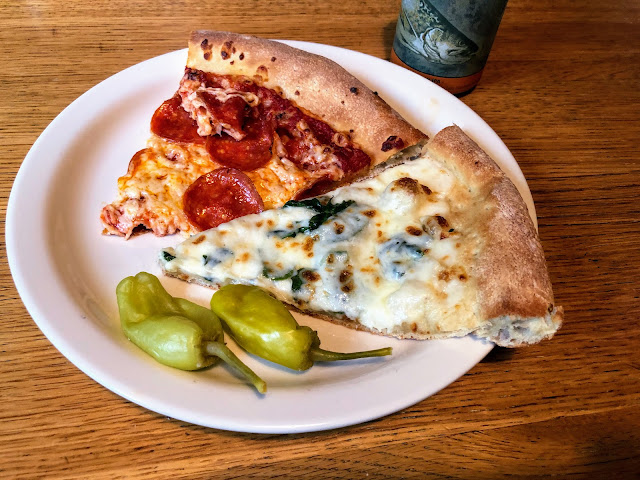 Friday: hubs and I went out on the town to the Italian place.  Yeah, we didn't get takeout, we went to the actual restaurant.  He had chicken parm and I had eggplant parm.  It was very strange and very wonderful.

Saturday: out to the drive in hamburger place.

Sunday: steak night!  The zucchini were pretty small so I pan fried them instead of grilling them and I think I like them way better that way.  Flank steak and portabellos from the grill, and mashed potatoes. 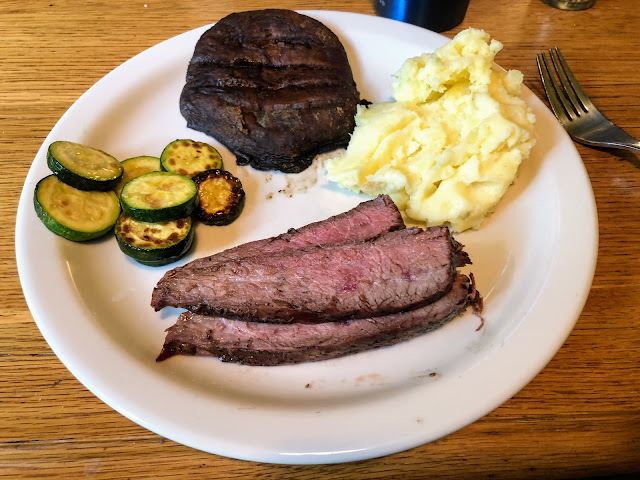 I rolled with the punches for a very hot week and got 29 of a planned 30 miles.

Tuesday was the disaster day when it was by far hotter and more humid than it had ever been before.  I was so excited about my workout of mile repeats that nothing was going to keep me from doing it.

Saturday was a 10 miler and I had the usual question of can/should I try to run that far in the heat.  And sure enough I did, though I came pretty close to bailing in mile 9.  I'll say it again, lots of water, lots of salt stick tabs, and lots of breaks.  I was able to keep them at 1.25-1.5 miles instead of every mile, though by the end I took them much more frequently. 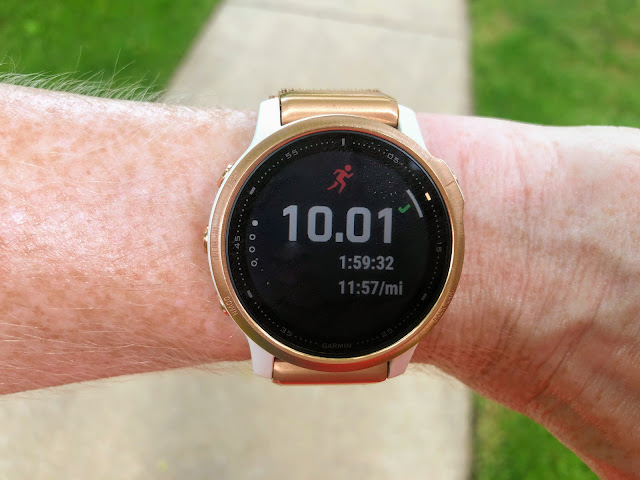 I finally sat the hubs down to watch what is IMO an underrated Hitchcock.  Well it's also a movie with some issues, but I do have a soft spot for it.  Marnie came out right after The Birds and it's about a serial white collar (lady) criminal.  Then she meets Sean Connery and everything gets upended.  The trailer is pretty dopey but it's the best YouTube has to offer.

Still nothing.  I have my next book picked out, I just haven't had time to get to it.

I had the best interview experience this week!!!!  This is with the company that originally didn't want to hire remotely but couldn't find anyone that they liked locally (in a very large major U.S. city I might add) so they came back to me.

The hiring manager and I clicked from the start but there was something more.  I caught sight of her wrist a few times and was blinded by a huge white watch...there was no way..."hey do we have the same Garmin?" I blurted out.

Yes, yes we do.  She's run NY and Boston and met her husband while training for Boston.  The interview got derailed for a good 10 minutes.

The next day I had the full panel of talking to a bunch of different people in the company.  All of the them were great but the Director of HR was the icing on the cake.  Yes friends, another Garmin was on display.

Obviously I don't want to read too much into this or get my hopes up too much but...oh guys, all of my boxes were checked.  It's the perfect job with a nice mix of things I do well plus some room to expand into new things, awesome people, and the company is doing something Very Good in the world and making good money doing it.  Fingers crossed!!!

No news from the other company that's in play, and no worries since they're the #2 candidate now.  I mean it's a perfectly good job and I would take it to get out of my current situation but good golly gosh almighty I hope that the dream job comes through.  There's nothing else in my hopper right now.

Back at the zoo I had the most asinine conversation with HR at my current job this week.  Everyone is on vacation this week so that adds another week of employment to my tally.  Yawn.

Posted by Birchwood Pie at 8:04 PM