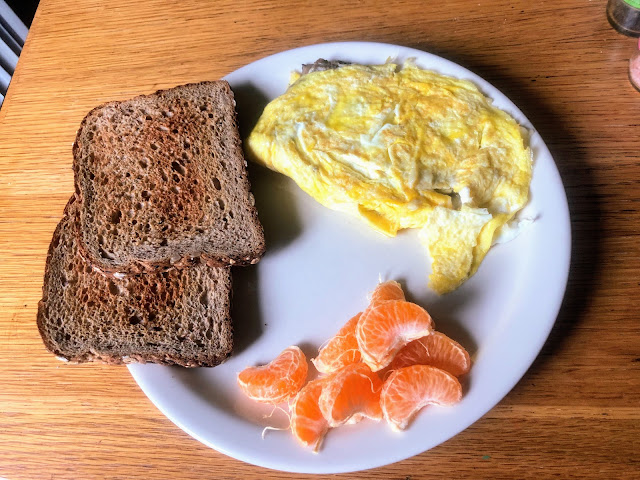 A weekly round up: eats, workouts, watches, and reads.  In this week's edition I did something that I've been talking about doing for a long time and my breakfasts are being supersized as a result.

The Thing That I Teased Last Week

I did something that I've been talking about for a while: I met with a sports dietitian.  I've talked about my problem many times in this space: ever since I started Running All The Miles I've been hit with All The Hunger and thanks for asking but eating All The Food isn't the solution that you would think it would be.  I'm either starving or stuffed all of the time, and sick to death of trying to figure this out for myself.

Once upon a time I had a half hour appointment with a dietitian and it was an unfortunate experience.  The appointment was through a running program held by a PT Clinic, so it was just some random staff dietitian who told me to (1) eat more in the mornings and (2) eat 1,600 calories a day and (3) the result was that I did start eating a morning snack, but otherwise continued to be as hungry as a horse and sure enough never did figure out how to eat 1,600 calories a day.

Take Two: through the running podcast world I've heard a number of really good interviews with dietitians over the years and sometime this spring it dawned on me when these dietitians aren't on podcasts they are working with mere mortals like me.  There is one particular dietitian who stood out to me as a "whoa - I agree with everything that this person is saying and every other example she gives sounds exactly like what I am dealing with".  So I signed up for one month of nutrition counseling which is: a one hour conversation, a meal plan, and then I keep a food diary for one month where I list what I eat, how my hunger is, how I feel, etc, etc and we both review it and adjust as needed.  As luck would have it, her first available date was this week, which was my first week of normal life after starting my new job, so realistically probably the first that I am capable of reflecting and making changes.

What the dietitian said: eat hella more in the mornings, way beyond my wildest dreams.  She said to stick with the fig bar or Clif bar before I run, but once I get home it's SuperSize time.  My go-to breakfast burritos are a small tortilla, 1/4 cup of black beans, one egg, salsa, and cheese.  She says keep the 1/4 cup beans, salsa, and cheese but get another egg in there on a bigger tortilla.  She gave me some options in the oatmeal world (not ruling them out but not high on my list) and her other egg option was two slices of toast, 2 eggs plus two egg whites.  I tried this after my long run on Saturday and wowza that's a lotta food but it also felt exactly like what I needed.

On the lunch scene, she gave me a few ideas to try including a supersized version of my "rice, sweet potatoes, and the kitchen sink" salad.  Dinners are similar.

I also have a snack list, and she said to have a snack in the morning AND/OR the afternoon.  There's nothing very profound here: yogurt, energy balls, granola bars, etc.  All fairly small stuff which I was suspicious of because if eating everything in sight isn't helping than how is a Greek yogurt going to help but so far so good.

This is all new so buckle up your seat belts and stay tuned.  I started following "the plan" on Friday.  On the negative side I feel like I am on a diet (because that's the only reference that I have for making nutrition changes).  On the positive side I'm a few days into to life without insane hunger or insane eating so I'd say that things are heading in the right direction.

I'm finishing off my stash of "tiny" breakfast burritos to make way for my new supersized breakfasts.

I was craving thai curry like no one's business and lucky me because I just happened to have some in the freezer.  It's not pretty but it was good. 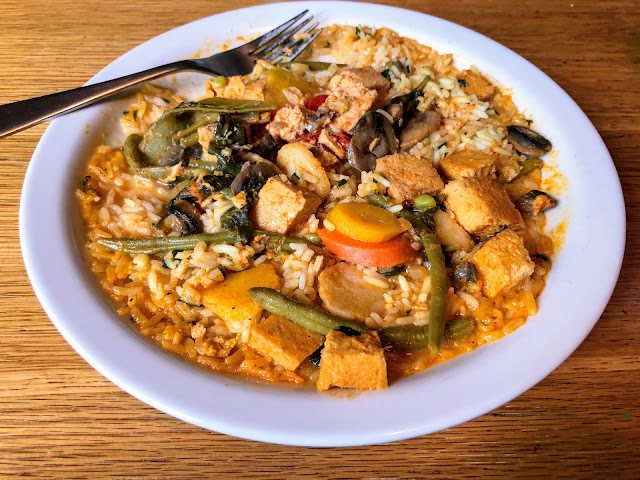 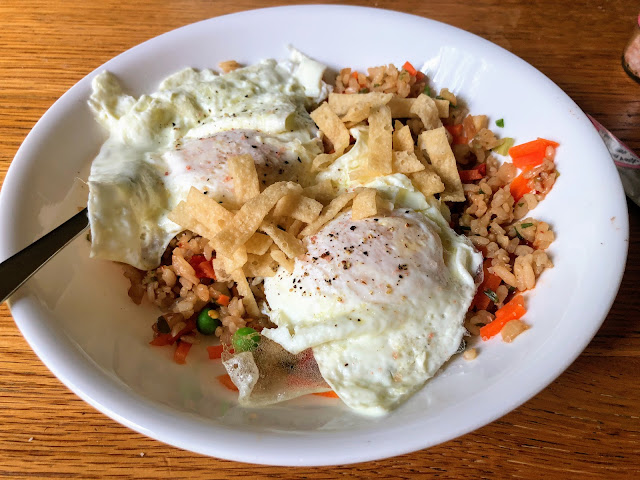 And the old standby, veggie burritos.  My latest recipe is one can refried beans + one recipe of tofu sofritas = 6 burritos. 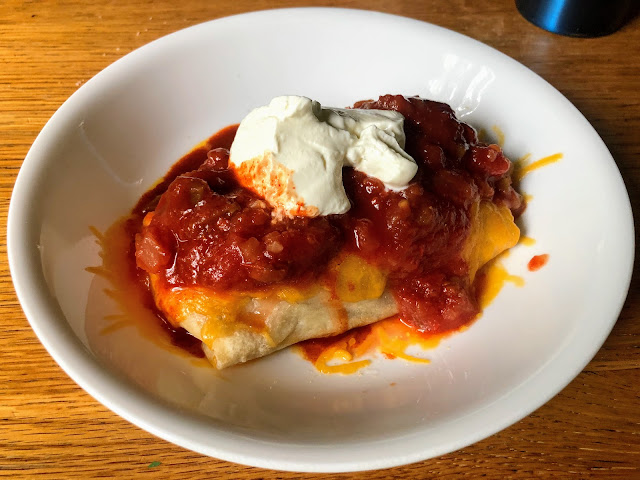 On Sunday I finally had a bit more time to cook so I got down to business with thai curry fried rice.  I even got the Instant Pot out for this one - I'm happy to tell you all day long how "not instant" the Instant Pot is but for something like brown rice it's definitely the way to go. 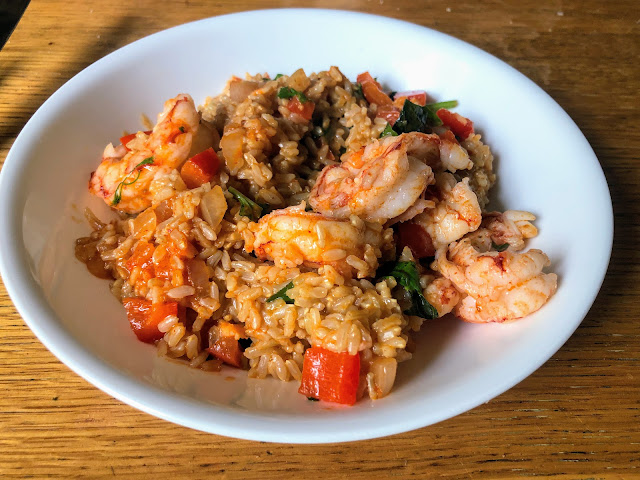 Monday: we started the week on a high note with salmon bowls. 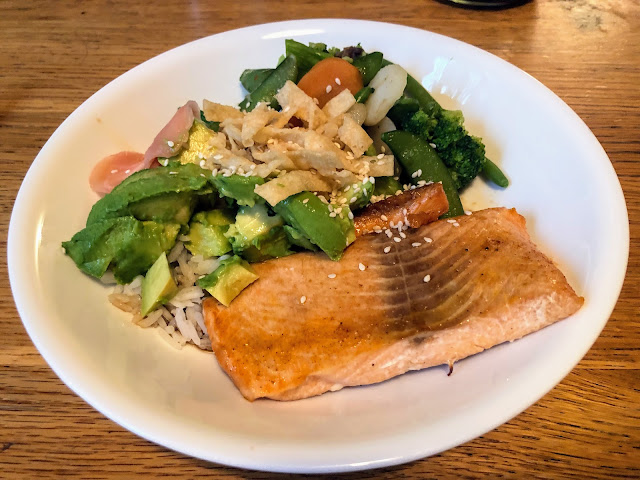 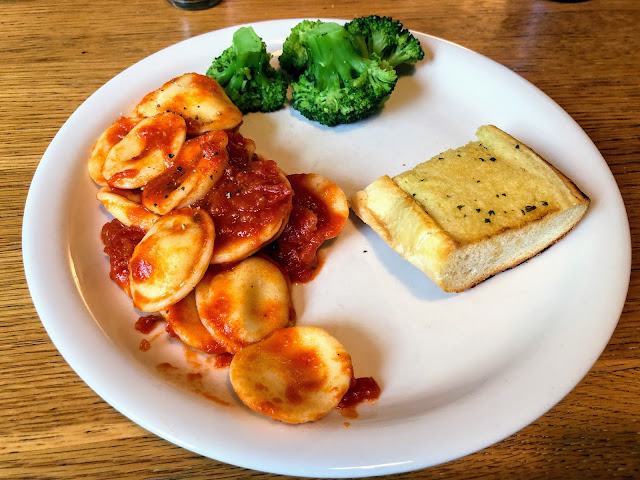 Wednesday: I let hubs do the honors with mac n'cheese and crispy chicken strips 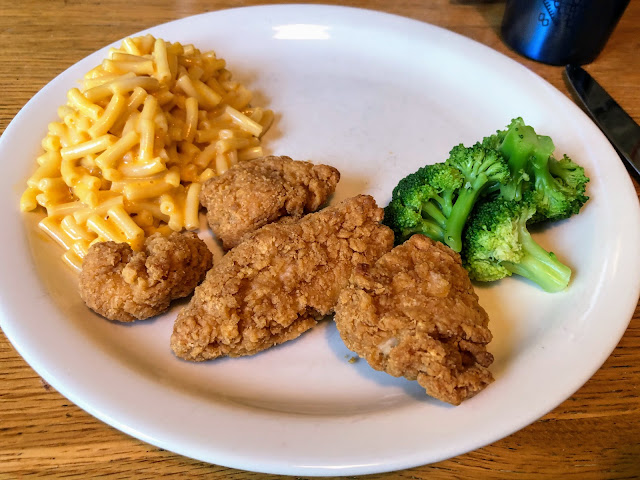 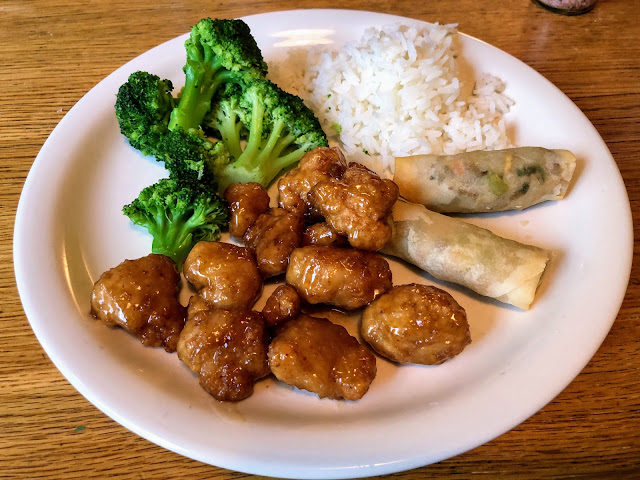 Friday: out on the town to the Mexican place where we had our first date.  The restaurant got a complete overhaul a few years ago and the food just isn't as good but the margaritas are still the same.

Saturday: out to the drive in hamburger place 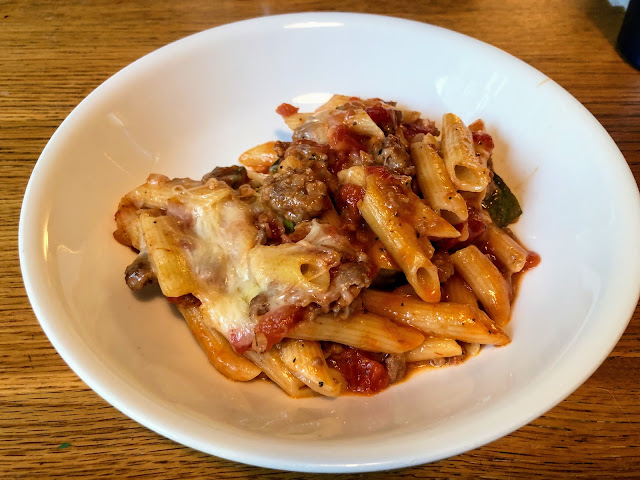 It was as ungodly hot as predicted...but I got my planned 33 miles anyway without dying;-)  We finally have cooler weather on tap for this week.

OMG, the hubs and I binged the most ridiculous, most wonderful show ever this weekend.  The Year of the Rabbit.

Welp, the book that I started last week started strong but I lost interest by a third of the way through.  And I don't mind one bit because another book came along to take its place.  Missing, Presumed by Susie Steiner.  I have a good feeling about this one (though in fairness I also saw a warning about disturbing content so hopefully it won't be too disturbing...sometimes you just can't win).

Posted by Birchwood Pie at 8:32 PM