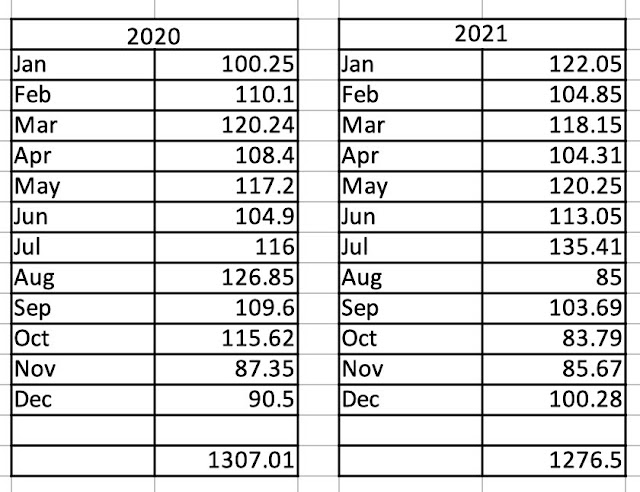 New Year, New State of the Run post.  Join me as I dive in to The Year of the Whatever and come up with my grand "what's next" plan.

Annual Disclaimer/Links to Previous State of the Runs

I am not qualified, licensed, or certified in any of this stuff. Anything that I write about running is just an account of my trials and errors.

My Goals for 2021 and How They Played Out

Goal: Run as much or as little as I want to
Result: I always knew the goal of running "more" miles each year was not sustainable.  In 2021 I ran more miles than I did in 2019 and less miles than I did in 2020.  I can't say that I ran "as much or as I little as I want to" because there were times when I ran less than I wanted to and times when I ran more than I wanted to due to blindly following a training plan instead of checking in with myself.
Goal: Take more cutback weeks and see if I can avoid end of the year burnout that I experienced in 2019 and 2020
Result: I had mid year burnout instead of end of the year burnout.
Goal: Do not neglect strength training
Result: Success!  I was much more consistent with strength work in 2021 than I have been in previous years.
Keep pushing the speed.  Run a sub 9 minute mile and a sub 30 minute 5k.
Result: Never tried, did not achieve.
Goal: Run fewer races.  I felt that I was constantly rushing from race to race without ever doing the proper training for any of them.
Result: I don't even know where to start...I worked with a coach to prepare for a half and it was a disaster.  The only PR's that I had in 2021 were for slowest times in the 10k and half.  Toward the end of the year I went on a racing binge and had a blast.
The Frustrating Thing About This Year

The expected story arc is "Do work.  Get results".

So yes, 2021 is the year that is not like the other years, and the year where I had to step back and ask "Why am I doing this?  What am I getting out of it?"  It's a given that I need to have some kind of physical activity in my life, but it doesn't have to be running specifically.

After some soul searching I decided that I'm not giving up on running just yet but I am giving up on the things that don't work for me:

Running a Bajillion Miles.  While I *can* run 30 miles a week, right now I feel like the only thing that I've gotten from it is bragging rights.  I can't figure out how to eat to support the mileage, which is where the weight gain comes in.  My coach had me running 8-11 mile long runs for six months and I was ready to quit my September half marathon at mile 5...it's just not working.

Running in the Heat.  I don't know why I have problems starting at the 60 degree mark, but I do, and no amount of reading about "heat acclimatization" is going to change that.  This summer just about wrecked me.  Going forward I will keep the treadmill in play year round and not run outside on extremely hot days.  I reserve the right to cuss out the next person who tells me that "summer training brings fall PR's!!!"

Coaching: I had valid reasons for working with a coach, and at first things went well.  But over time I found myself doing things because they were "on my plan" over following my own instincts.  When I would talk to my coach all that I got back was a canned response.

Me: "I felt dizzy after the first mile of my easy run today and it's going to be even hotter tomorrow for my speed workout, what should I do?"
Coach: "Just base it on effort.  Or move the workout to the coolest day of the week".
Maybe I would have gotten a different result if I had pushed back with "What does "effort" mean when I'm dizzy to start with?  You and I live in the same area and I don't see any day in the next two weeks that's noticeably cooler than any of the others so which day did you mean by the coolest?"  But as it was I gave up on trying to communicate with my coach and clocked in the miles on my plan.  Lots of long runs in the heat where I had to stop every mile to rest...instinctively I knew that I wasn't building fitness and was just training myself to hate running, but I kept at it for much longer than I should have.
I don't think that any coach is going to give me a different plan than running a bajillion slow miles.  If I get to a point in my running where I feel like I would benefit from a different viewpoint, then I might try working with a coach again.  But for the foreseeable future I'll stick with my lonesome.
Half Marathons.  While there is something very awesome about crossing the finish line of a half, this distance hasn't been my friend.  I will be running at least one more half, but it's not going to be my focus going forward.

Live racing was back this year.  I put in 82.2 miles of racing over 12 races (fun fact: that's exactly the same racing miles that I ran in 2019 with 11 races).  I ran six races in the first ten months of the year and six in the last two months of the year.

March: a hilly 15k and a virtual Shamrock Shuffle

September: a sucky half

October: a half that didn't suck as much as the September race

November: a 10k that was just OK, a 5 miler that I put some spunk into, a Turkey Trot 5k, and a Christmas themed 5k two days later.

My favorite races were the November 5 miler (I used a power walker as my pacer!) and my 2nd 5k of November (best race time).

2021 Shoe Stats
5 pairs purchased, and 4 pairs kept.
The "fail" purchase was the Brooks Levitate 4.  The shoes were gorgeous and felt good, but the built in tongue made the shoe too tight on my right foot.  The Levitate 5 has a "normal" tongue and rave reviews, and as soon as I see a sale I will revisit this shoe.
My other 4 pairs of shoes were the Brooks Launch 8.  Overall I'm a fan BUT:

I'm open to trying other shoes outside of Brooks, but for right now I feel like the Launch is working for me.

I got a hydration backpack this year and it was a game changer for long runs and races.  This is the one that I have, which is perfect for the price.

While technically this isn't gear, the other worthwhile new thing that I tried this year is Skratch Hydration Mix.  In the end I wasn't able to solve my heat problems with electrolytes, but it sure helped in places.  I tried it because I got a free pack from a Strava challenge, and then forked out my own money to repurchase it.

What's in the Forecast for 2022?  Imma keep running