Weekly Round Up: The One About Racing, Madonna, Art, and Unicorns 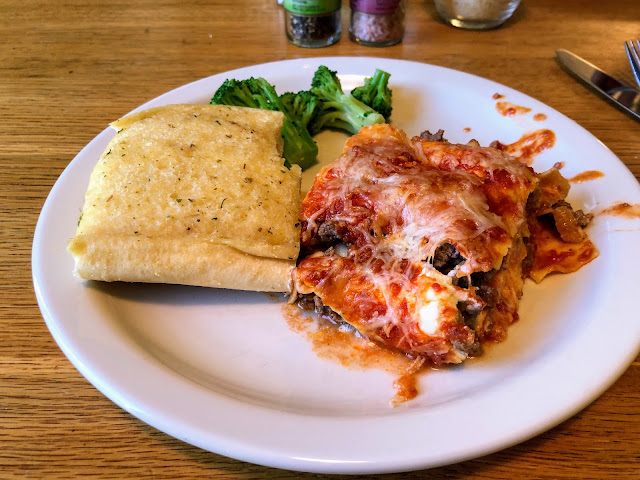 A weekly round up: eats, workouts, watches, reads.  In this week's edition I ran a race, took the ultimate trip back to the 80s, I'm taking a detour to talk about art and puzzles, and of course I'll get you up to speed on the jobby-job search.

Once again I don't have much to say on the dinner front.  We scrounged around in the pantry for dinners this week and I made lasagna on Sunday (one lasagna = 3 full dinners for us).  As soon as I can get to it I'll be making a mountain of breakfast burritos and veggie burritos to restock the freezer for all of my non-dinner meals.

Sunday was an all in one day for running==>I knocked out the longest run for my half marathon training of 11 miles and the final 10 miles of that were my 5th race of this year.  The biggest difference between this race and my last race is that this time the snow came before the race.  It was coming down pretty heavy on the drive out but it wasn't sticking, the pavement was dry, and it wasn't very cold so it was all good.  This race was also a little more urban than the previous one so the only place to run was in the parking lot at the race start.  The lot adjoined with several others in a shopping mall complex so there was plenty of real estate to get the one mile that I needed.  Several of the other of the runners were getting some pre-race running in as well so I had good company.

The race kicked off and we went from the city streets into a park that was completely closed off to traffic.  I let myself run at whatever pace my body wanted and didn't look at my watch.  By the 3rd mile I was pretty much alone though I could at least see a few runners ahead of me.  The course was very well marked so I wasn't concerned about that, but I did have the sinking feeling that I might be in last place.  The isolation lasted until the turn around where I was able to see that there were at least two other people behind me so at least that was something.  I knew that I couldn't catch the runners in front of me and I never saw the runners behind me again so I wasn't worried about them passing me.  Mile 6 was pretty tough but once I was beyond that I could rationalize that the end was near-ish.

Good things to say: there was a lot of uphill in this race and I never considered walking for one moment.  So at least I've come that far from last year.  I can't say if I've gotten any faster on hills but I no longer dread them.  Even though it was a slow effort, about a quarter mile from the end I could see the finish line and once I saw it I got a huge speed burst and got myself a fast finish.

Bad thing to say #1: yeah I continue to really not like distance running so it's just as well that race day is almost here.  Next week is "just" 8 miles, the half is the week after that, and once that's in the bag I have no reason to run longer than 10k unless I want to.  Uh correction, I have no reason to do any of this at all except that I want to.

Bad thing to say #2: the course was short!  My Garmin was showing 9.92 at the finish line and fine that's close enough to 10 miles but dammit I came there to run 10 miles so I did!  I slowed down to get my medal and then I kept running until my watch beeped the end of the mile.

Banana Recap: there was no finisher festival at all, so no banana to take home to my husband.

Question for the runners out there: has anyone else kept running after a finish line?

Okay, everyone knows that I like me some old movies but now we're going to talk about a movie that's really old.  For those of us who were watching movies in the 1980's how long has it been since you've thought about Desperately Seeking Susan?  Not since 1985 am I right?  For context, that's the year that I turned 10.

It all started with a very simple conversation with the hubs.  He told me that Madonna had posted a very bizarre video recently, we got to watching 80's music videos on Youtube, and Get into the Groove came up (that's the theme song from Desperately Seeking Susan to refresh your memory of Things That You Have Not Thought About Since 1985).

I explained to him that I don't know or care about anything that Madonna has done since the 1980s but at the time she was everything.  I was watching her videos on MTV, riding my bike to the library to check out her LPs and recording them on cassettes (that's what we did for fun in the 80's and yes my bike basket was wide enough to hold LPs), and when Desperately Seeking Susan came out I was at the theater and then at Blockbuster renting the VHS many times after that.  He said that he had never seen it, so we couldn't let this difference in our life experiences remain.

There's no way that I understood anything about this movie in 1985 other than Madonna was fabulous, but that was enough at the time and it makes for a good 80's flashback now.

I stepped away from the book that I'd started a few weeks ago because Hideout by Louisa Luna came in at the library.  I'm about a chapter away from the end.  I will say that so far I'd rate it #3 out of the three books in the series, but I will also say that once I got about halfway through I couldn't stop reading it so I started gobbling it down.  If you're into gritty mysteries then I'd definitely recommend this series.

Usually I like to do a few jigsaw puzzles in the winter and once the weather gets better I kind of step away from them.  However this year "puzzle season" has been extended by my art obsession.  A few weeks ago I had a moment with American Gothic at the Art Institute of Chicago and I got to spend a lot of time with it in its puzzle form: 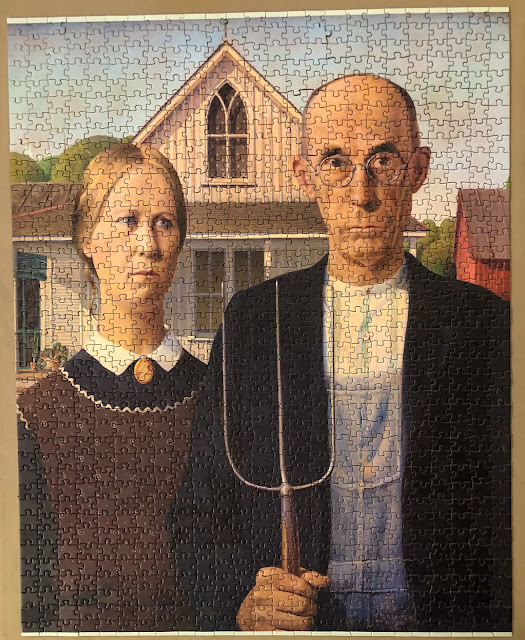 I didn't mention it at the time, but my #2 favorite from the museum was Nighthawks.  I had a similar experience that I had with American Gothic of seeing it in a whole new light.  We're told that it's supposed to be about isolation and loneliness, but when I was there in person that's not the vibe that I got.  These people look cool and like they're having a blast.  This is discussed in the video and the artist refutes the claim and says that it's up to the viewer to interpret it (a very nice way of saying haters gonna hate).

One detail that I didn't see in the painting that is very obvious in the puzzle is that the woman is holding something small and green in her hand==>but what is it????  I mean it must have some significance.  I went down the rabbit hole and I got: "it's impossible to tell what the woman is holding - it might be a sandwich, it might be cash, or it might be a pack of Lucky Strikes".   C'mon we can do better than that.  There's no way it's food, it doesn't look like a wad of cash, and it also seems too small to be a cigarette pack.  But it is about the right size to be a matchbook so my theory is that she's just lit the cigarette of the man next to her.  The man and the woman's hands are practically touching and the attendant is looking at them as well so that disputes the video's claim that none of the people are interacting.

Here's how far I've gotten with the puzzle.  The rest will take a bit since it's all dark blue and black pieces. 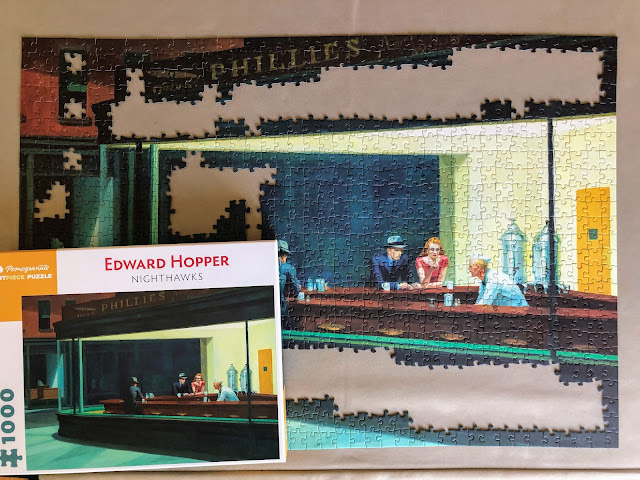 Even with nothing exciting on the horizon I'm feeling upbeat about the job search/unicorn hunt.  I feel like I've worked through my share of mediocre dates and The One is just a mouse click away.  How many mouse clicks I don't know but it's out there.

Posted by Birchwood Pie at 8:24 PM