Weekly Round Up: Shake It Off 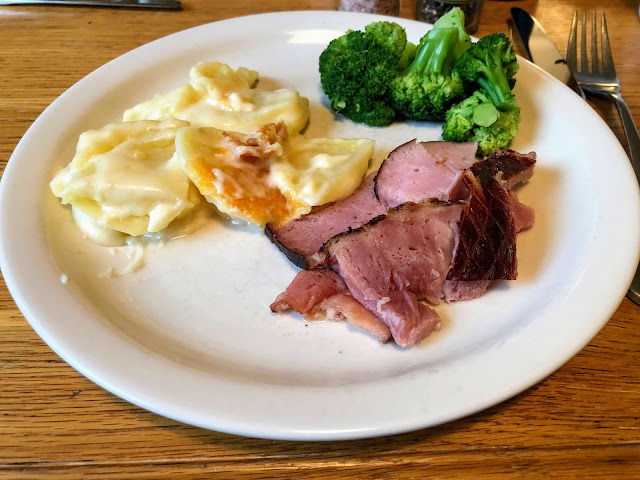 A weekly round up: eats, workouts, watches, and reads.  In this week's edition I made a lot of burritos and shook off a bad race and a slow job market.

On the dinner front, it was leftover week.  I made a batch of scalloped potatoes to go with our Easter ham which saw us through Monday and Tuesday.  I sent the rest of the ham to the freezer for later use in quiche.

Boy Scout Camp was this weekend, which meant a single girl Friday dinner.  As I was musing over what to eat, I remembered that some time ago I'd meant to make Spinach Artichoke Pasta but had never gotten around to it. I was certain that the block of cream cheese that I'd gotten back then would be long past its expiration date and I was pleasantly surprised to find out that this was not the case.  Dinner came together in a flash and I have a bounty of leftovers for lunches. 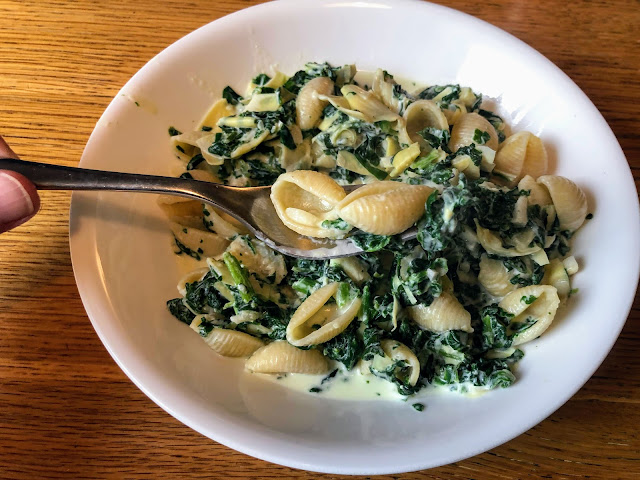 I also set aside a weeknight to restock my freezer burrito supply.  I made another batch of my knock-off Trader Joe's breakfast burritos.  This time my ratio was:

The end result was 13 burritos.  Next time I will make half a batch of the potatoes since it's a bit of a haul to work with that much food at one time.

For lunch burritos, I wanted to try out a "steak" burrito with soy curls.  Just a side note that I'm not a vegetarian or vegan but soy products are a staple of my diet because (1) I like good food and (2) I like leftovers and meat just doesn't freeze and reheat very well.

I used this recipe for the soy curls.  My changes were (1) just use a few dashes of soy sauce instead of a full four tablespoons since that's kinda a lotta sodium for not very much food and (2) no need to fry them up in a skillet since in my experience soy curls don't really crisp up.  I packed up the burritos with about 50% soy curls and 50% refried beans which got me 6 burritos and the combo is a winner.

I ended up running more during the week than I usually do leading up to a half marathon and it turned out to be a good choice because race day was a stinker.

Monday & Tuesday: in theory I *could* run outside on weekdays right now since it gets light around 6:30 but I happily chose not to since we had a late season winter storm.  I was more than happy to ride it out on the treadmill.

Thursday: my best run of the week!  I decided to do an outdoor speed workout with an eye on my next running goal of running a sub 9 minute mile in June.  I came up with 1.25 miles warm up (a.k.a the distance from my front door to the park where I do speed work) and then six reps of 0.1 miles fast and 0.2 miles recover plus a cool down to get me back home. This workout comes from...my long ago memory of a speed workout that I found somewhere on the internet that I used to do on the treadmill back in the day.  The goal was just to see how fast I could get without killing myself.

My first split was somewhere in the 9's and then I walked for half of my recovery and jogged for the rest and from there my splits went right into the 8's AND they felt good.  I got through all six reps and still felt great.  I had a buzzy runner's high for the rest of the morning.  I'm tagging this as my favorite run of the year so far and I'm excited to see what I can do with this from here.

Sunday: half marathon #9.  My previous score with half marathons was 3 good and 5 bad and now it's 3 good and 6 bad or officially that 2 out of every 3 half marathons that I run suck.  Sunday was quite the throwback to my first half marathon of being the first truly hot day of the year.  Yes you read it right that we had a snow on Monday and then this on race day. 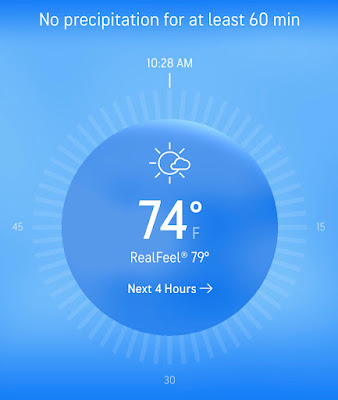 Everyone is different with what they can tolerate for heat, but I personally start having problems when we get north of 60 degrees and over 70 just doesn't work for me.

This race was a marathon with a half and a relay, and as you may recall, my primary reason for signing up was that early registration for all distances was $26.20 - I mean for that price you can't not register.  Shortly after signing up I had my meltdown with half marathons and was always somewhat indifferent to this race.  Yes I got through all of my long runs but my heart was never really in it.

When I first saw the forecast at first I wrote this one off but then I got my head back in the game.  On paper 70 degree temps plus full sun was going to be a disaster but what if the weather was different than what was on paper?  I pre-gamed with a ton of Skratch the night before to get my electrolytes up.

The temperature wasn't so bad at the start of the race although the sun was out in full force.  The first mile was deliciously downhill.  By the close of mile 2 I was starting to feel the heat.  Mile 3 saw the onset of  dizziness.  Rather than to give up then and there, I switched to intervals of a quarter mile run - tenth of a mile walk which got me to mile 5 but I felt terrible.  The 5:40 marathon pace group passed me, and I saw that they were doing 30 seconds run - 30 seconds walk so I joined in with them for a good bit before giving up.  The exertion of running was too much but walking felt fine and it soon became a game of seeing how fast I could walk, and I was pleased to see that I could keep my walking pace around 14 minute mile, which was better than my running speed at this point.  I decided that I would start running as soon as it didn't feel hideous and spoiler that never happened.

At this point the race went into a really long out and back residential section.  I stopped wearing headphones to races at some point last year which is the only reason for what happened next.  There were a lot of spectators and I caught a voice from the crowd but I didn't recognize the face.  My brain got to work and triangulated "familiar voice + unfamiliar face + location" and told me that this was the cohost of a local running podcast that I enjoy listening to.  I only know about the show because one of my friends was a guest and she has very occasionally posted pictures of herself and the two hosts on her Facebook page, and it clicked that one of them lived in this town.  From the show I know he has another goal race this spring so it made sense that he would be spectating and not running.  I was 99% sure but felt weird about saying "hey are you [podcast host]?  Great show".  Then I realized that would have been a really nice thing to say but I was already long gone and promptly forgot about it.

At the turnaround in mile 8 I saw a running friend who was also walking and alone.  I was surprised since I knew that she was running the race with her husband.  It turned out that she was having problems with the heat and he wasn't so she'd sent him on ahead and she had been run-walking ever since.  We buddied up and from then on the race went from a disaster to the best time ever.  She was in the no-win in that if she walked her feet hurt and if she ran her legs hurt, so she alternated running and walking based on what was hurting the most.  I felt fine walking and awful running, but I was able to match her speed so we were able to stay together for the rest of the race.  And then I got a second chance because we saw the podcast host again.  I wouldn't have recognized him by sight but luckily he was still talking which took me from 99% to 100% certainty and yes I was correct!  So I got to say hi and tell him that I was a Fan of the Pod.

Somewhere in mile 12 we learned that the full marathon had been shut down due to the heat.  At 12.7 miles it was a straight downhill to the finish and we decided to start running.  I immediately felt awful but I knew that if I stopped that she would stop and anyway it was just a few minutes so I stayed with it.  We crossed the finish and I caught a spectacular case of the dry heaves.  Once it passed my friend and I had a very sweaty hug and met up with her husband.

TMI recap: I have yet to puke at a race but my lifetime tally of seeing other runners puke doubled in this race from two to four.

Banana recap: this race is a PR for the Biggest Banana that I have ever taken home from a race.  I also came away with a can of Michelob Lite for my SIL and even better yet they had chocolate milk which is my post-race beverage of choice.

Anyways...three years ago at my first half my reaction was that not being able to tolerate the heat was a personal failure.  Today I know that bad races happen and I shook it off as soon as I left the finish line.  Physically my calves are very achy since I'm a distance runner and not a distance walker so I'll be taking a few days off and then getting back at it.

On the treadmill - season 6 of Outlander.

On the couch - I've seen the documentary and I've listened to the podcast but apparently I still haven't gotten enough of my favorite wire-fraud-convicted-entrepreneur because now I'm watching the show.  The Dropout is a fictional telling of the Theranos story and I started watching it on Friday night while the hubs was away at Scout camp.  He got home just as the first episode was ending and was immediately glued to it like a magnet right along with me.

I'm having great success with the book from a TV show that I couldn't get into.  The book is You Should Have Known by Jean Hanff Korelitz, which was the basis for the HBO show The Undoing.  It's about a therapist who writes a relationship book called You Should Have Known about how the warning signs of a bad relationship are very often obvious if you know what to look for only to find out that her marriage is the prime example of this.  I bailed on the TV show in the first episode because I was getting bored but the book has me hooked.

Oof it is a good thing that I have a job because it's mighty dry out there.   At least I found a few things to apply to, but I haven't had an interview in 2 weeks and I didn't so much as get a rejection this week.

Pretty much everyone at my current job was on vacation this week so it was a light load.  I'm as happy to sit back and collect a paycheck as the next person but sheesh...let's get some action in here already.

Posted by Birchwood Pie at 7:45 PM