Weekly Round Up: Thumbs Up 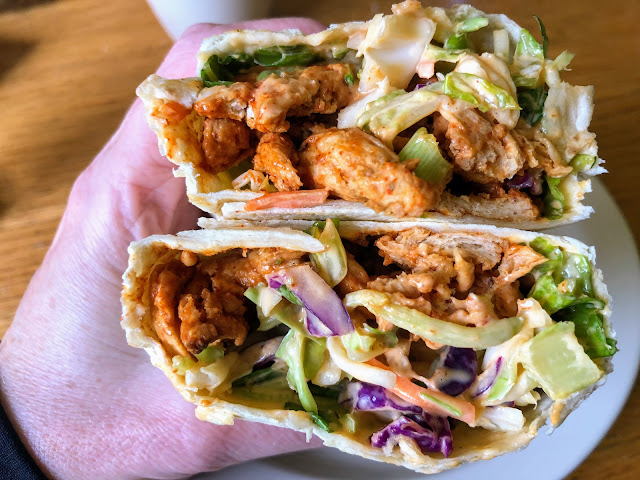 A weekly round up: eats, workouts, watches, and reads.  This week I'm giving big ups to a new lunch discovery, a TV show, a movie, and a book.

Lately I've been watching Cheap Lazy Vegan youtube videos for entertainment purposes which is how I came across her soy curl buffalo wrap and I dropped everything to make up a batch and then dropped everything to make it for lunch three days in a row.  My only change to the recipe is that I skipped the vegan cole slaw dressing in favor of the non-vegan buffalo ranch dressing that came with the chopped salad mix that I bought.

Anyways, this is very easy and OMG so so so good and will be a frequent flyer in my lunch rotation going forward.

As far as new and exciting things to eat for dinner...yeah let me get back to you on that.

Ah good ol'half marathon recovery week.  All of the walking left me with seriously sore calves and shins so I took a full three days off and then eased back into it with a few easy runs.  Next up: a lotta speed work and a lotta shorter distances in pursuit of the elusive sub 9 minute mile in late June.

Hubs and I knocked back the rest of The Dropout over the weekend and it was excellent.

On The AFI Top 100 rewatch front, I have one for the "I changed my mind" category.  For me, Charlie Chaplin movies fall into two categories: they're either terrific or completely snooze worthy.  From what I remembered, The Gold Rush was in the snooze category, and the only reason that I took another look was that the Unspooled crew raved about it.

The problem with this one is that there are two versions.  In the 40's Chaplin tried to make silent movies cool again by replacing the title cards with narration and reediting the movie, and I believe that's what I had previously seen.  What I saw this week was the original 1925 version and there's a world of difference.  The 1940's version is just a movie about a guy who eats a shoe and the original version is a great movie.

My top three Chaplin movies are The Kid, Modern Times, and City Lights and now The Gold Rush has a solid hold on spot #4.  It's been a long time since I've seen them but I have good memories of Monsieur Verdoux, "meh" memories of The Great Dictator, and pretty much no memories of anything else on the Chaplin list.

Speaking of Unspooled, I'm almost at the end of the AFI movie episodes!  I'm rationing them out and I will be very sad to get to the end of this journey.

More thumbs in the air for You Should Have Known by Jean Hanff Korelitz.

I'm still looking for a job and I still have a job, but it's hard to tell sometimes.  I applied to a grand total of one (1) jobs last week and things were painfully slooooow at my current gig for the second week in a row.

Posted by Birchwood Pie at 9:05 PM