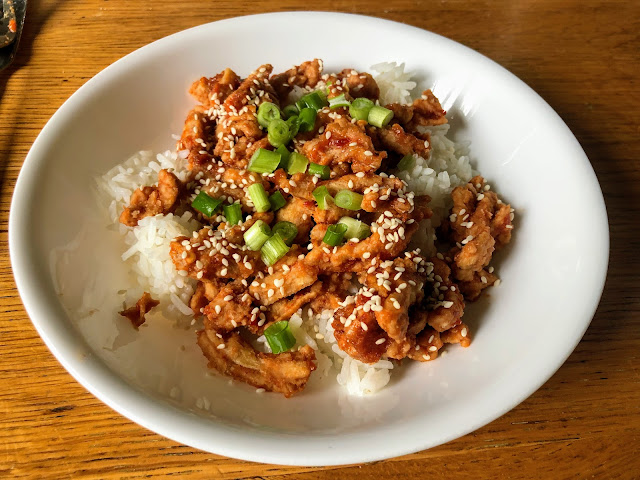 A weekly round up: eats, workouts, watches, and reads.  In this week's edition I found another winning lunch from Cheap Lazy Vegan, hit up the speedwork for running, nerded out with the hubs on an art documentary, and found a full house on the job hunting front.

When I saw Cheap Lazy Vegan's Korean Fried Soy Curls, I got myself into the kitchen stat.  I subbed sambal oelek for the gochujang paste and used less corn starch because a 1/4 cup seemed like a lot.  I followed the recipe for everything else.

The hubs made pasta for us one night and I whipped up flank steak and mashed potatoes for our Sunday dinner. 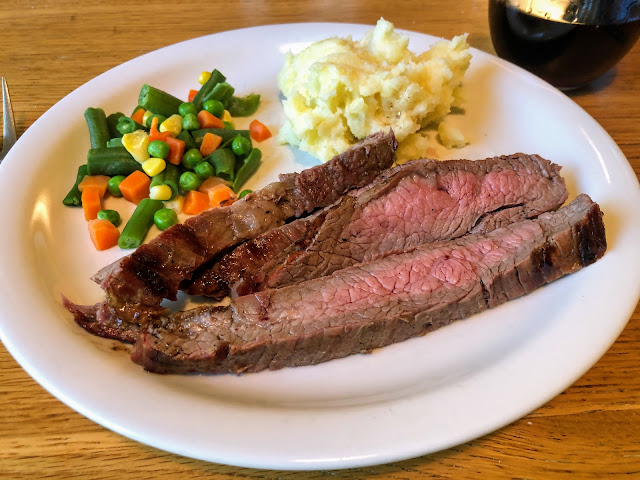 Two hits and a miss this week.

Monday: I'm staying true to my plan to keep running on the treadmill at least once a week year round so that I'll be in "treadmill shape" when it inevitably gets too hot to run outside this summer.  I've decided to make Monday a mandatory treadmill day to get it done and out of the way for the week.  4 miles.

Tuesday: first speed workout of the week!  1.25 miles warm up and then 4 x quarter mile fast/quarter mile recover and then a cool down mile to get back home.  My goal for the speed for this one was "hard but not dying" and hit high 9's/low 10's minutes per mile for speed.

Wednesday: ideally would have been a rest day, but I knew that I wanted to take Friday off so I did a ridiculously easy 3.25 miles outside.

Thursday: back to Speedwork Park!  I did the same workout that I first tried two weeks ago, which was six rounds of 0.1 miles fast and then 0.2 miles recover.  I had no problem getting into the 8's for speed and the time flew by.

Saturday: the good news is that my favorite 5k is back as an in person event, the bad news is that it was a dud.  I had no energy or fire to put into it, which I think was due to the two speed workouts.

The speed work felt really good, so if that's what caused me to tank the race, it was worth it.  I'll repeat the same workouts next week and then see how I feel about increasing the number of reps or distance.

If you have any kind of interest in art and an hour and 20 minutes of free time, I've got one for you.  Tim's Vermeer is a documentary about an inventor who recreates the technology that the painter Vermeer used and tries to replicate one of his paintings.  And oh by the way he's not a painter.

It was an eventful week in reading.  I came across this list and started picking titles based on what was available at the library.  I started with Goodnight Beautiful by Aimee Molloy.  It's about a therapist and his wife who move from NYC to a small town where he starts a new practice out of their home.  His wife has some extra time on her hands and starts listening in on his sessions which sets up a chain of events.  At first the story and the characters were coming off as just a little too beachy and the book wasn't really holding my attention, but once things got going I couldn't stop reading.

After that I headed straight for another title on the list, Dear Child by Romy Hausmann, which is not at all beachy and got me hooked from the first page.  I'm almost done.

After a three week dry spell of no interviews, only a few new prospects, and barely even a rejection the dam broke.  Let me introduce you to the latest batch of suitors.

Bachelor #1: whoa whoa whoa the week got off to a great start when a Big Deal Company came to me!!!!  The job title was a match but the actual work was too senior so it was an easy pass.  Even though it wasn't the right job I'm flattered that I came up on their radar.

Bachelor #2 is the one (1) job that I applied to last week.  I had my initial recruiter call and first interview with the supervisor this week.

Good stuff: I like the supervisor and the speed at which the company is growing.  The job is a perfect match for what I do.

Where it stands: they will let me know if they want to move forward in the interview process.

Bachelor #3: I'll have my first conversation with them next week.  The job and the company look good and my gut says that I like them a little bit better than Bachelor #2.

Posted by Birchwood Pie at 8:27 PM