Weekly Round Up: Off the Grid 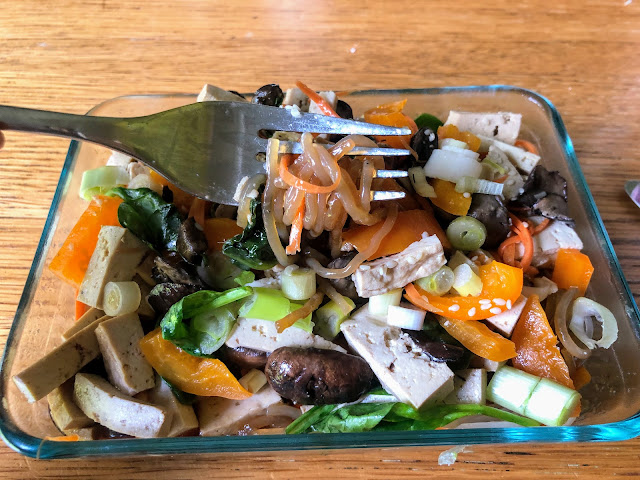 A weekly round up: eats, workouts, watches, and reads.  In this week's edition: we had a major storm that knocked out our power for a day, I tried some new things in the kitchen, and I'm re-evalutating my goal for the mile race.

I started off the week by making an "I tried" lunch inspired by Gimme Some Oven Japchae.  On Monday morning I went to see my husband and stepsons represent the Boy Scouts in our town's Memorial Day parade and then came back home for a solo lunch while they finished their parade duties.

Here's what's in the bowl besides the japchae:

I cooked the noodles and sauce, sauteed the veggies, and then mixed everything together and sprinkled some sesame seeds on top.  Although it was a lot of slicing n'dicing and a lot of pans this was very easy to make and very satisfying.  I came away with three very generous portions and yes I recommend it.

I also got fancy and made a sushi bowl for lunch one day.  I've had a portion of frozen ahi in the freezer for a good bit now and finally had a ripe avocado to go with it.  The rundown is: rice, avocado, ahi, a julieened carrot, this dressing (without the wasabi), furikake seasoning, and a few seaweed sheets on the side. 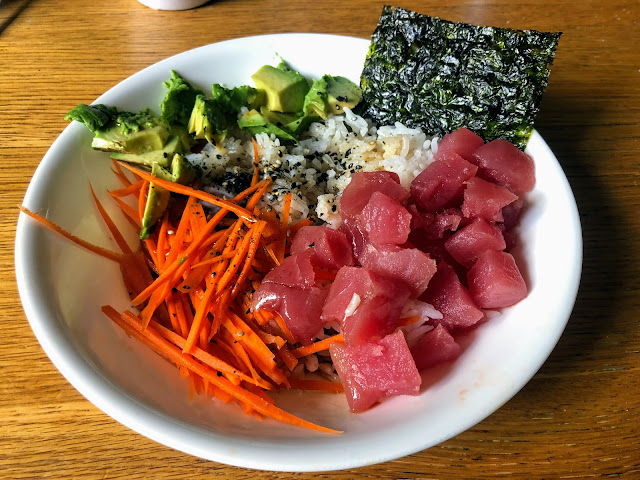 My final lunchbox report of the week is that this IG post convinced me to try Trader Joe's Thai vegetable gyoza pan fried in their crunchy chili onion oil.  I ate these over rice and they were divine.  I'll be stocking up on more gyoza on my next TJ's trip. 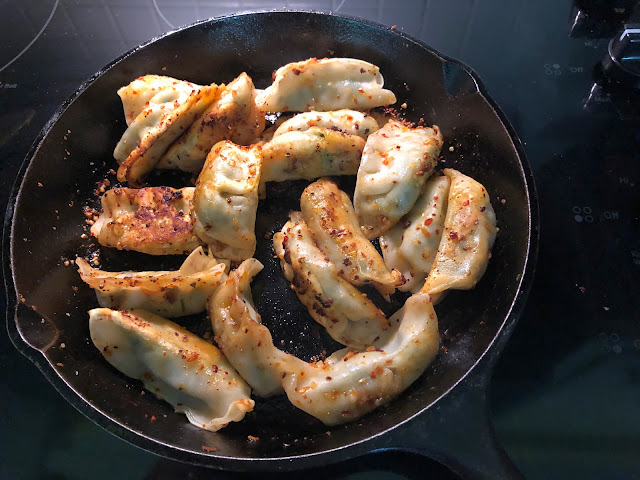 Monday: Hubs got us a BBQ meat combo that someone brought into Boy Scouts recently.  It was exactly enough food for the four of us and was pretty good. 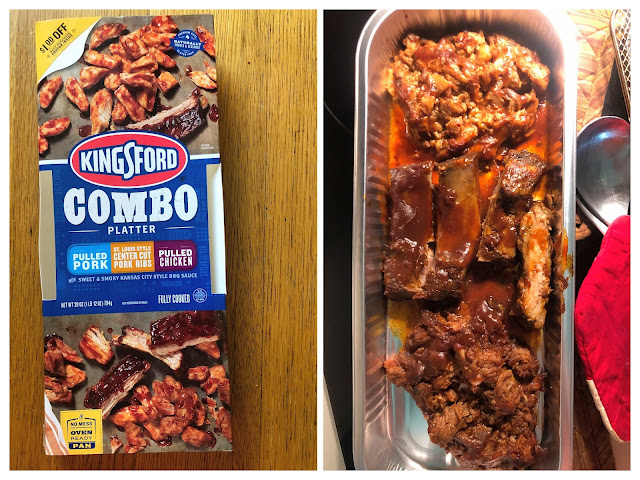 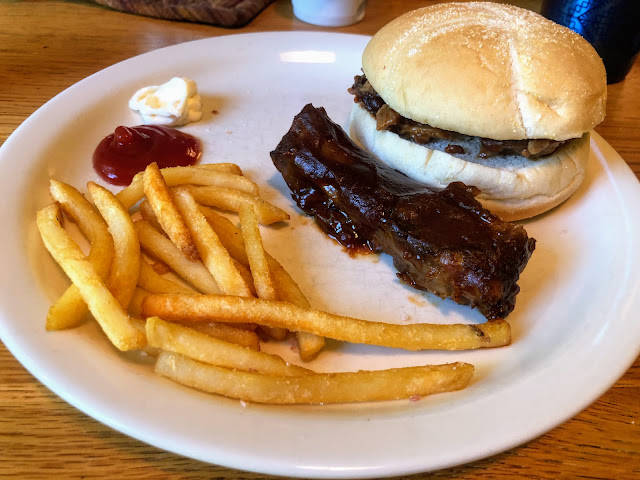 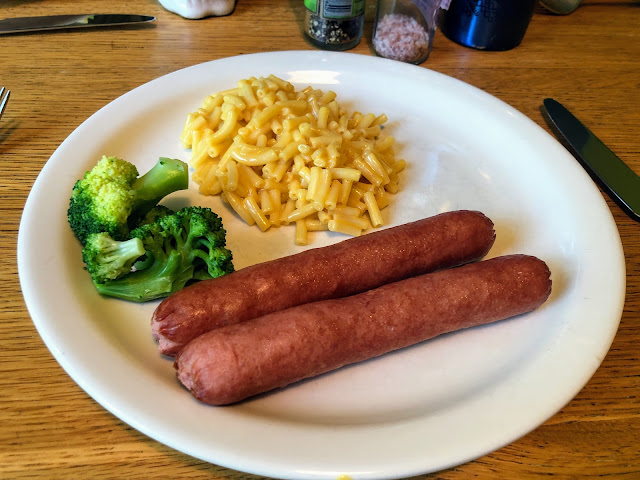 Wednesday: no picture, but I made chicken parm for the rest of the fam and had a freezer portion of spinach artichoke pasta for myself.  As I was cooking, the sky got darker and darker.  The very second that I put dinner on the table a furious summer storm started.  The rain was coming down sideways and the wind blew sizable branches into our yard.  A few minutes later to the surprise of no one the lights went out.

We soon learned that the outage was city wide and that there was a whole heap of damage from fallen branches so the odds were strong that the power wasn't coming back on anytime soon.  It just so happens that the hubs got himself a generator for Christmas last year and he was more than happy to put it into action.  A short time later he had the internet, the fridge, and a few lights hooked up and we had all of the power that we needed.  We spent the evening hanging out in the living room reading.  Stepson #2 takes piano lessons and he likes to practice on an electronic keyboard with the volume down low so that only he can hear it, but with the power out he had to play on the "analog piano" and so we got a bonus concert.  We hadn't heard him play in a while so it was amazing to hear how much he's improved in six months of lessons.

Thursday: the power was still out and there was so much damage citywide that school was closed.  Hubs booted up the generator again and ran extension cords up to our offices so we had everything that we needed to do our jobs.  When stepson #1 woke up mid morning he seriously through that we'd just let him sleep in and that he'd missed school and he was very upset.  Hubs and I both burst out laughing and so did #1 once he figured it out.  We got takeout for dinner that night - I mean we could have cooked something on the Boy Scout camp stove if we'd wanted to but no one wanted to.  We had another family night at home and another piano concert before the lights came on late in the evening.  Yes we lost everything in our fridge because we couldn't run the generator 24/7 but this is still top of my list for favorite power outage ever.

Friday: date night 1 of 2!  We went out to a fancy restaurant.

Saturday: date night 2 of 2!  We grilled up some chicken bacon ranch burgers. 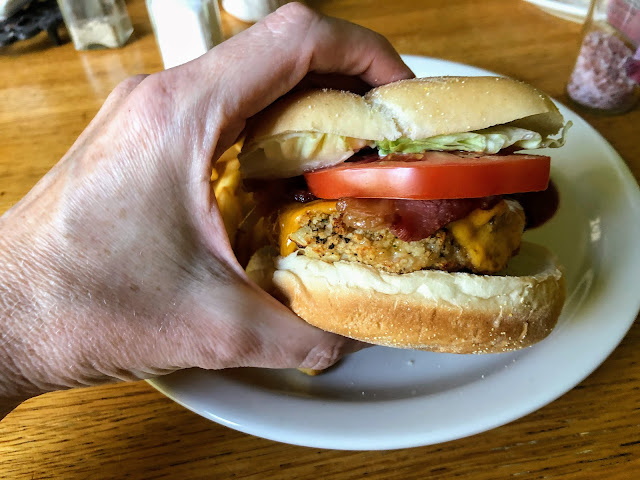 Sunday: the boys had separate extra curriculars so the four of us ended up getting home at four different times.  We did a "fend for yourself" night.

Eh whatever.  It was just a so-so week for running.  I took a shot at increasing my fastest workout from 0.15 miles to 0.25 miles and was not able to hold the pace.  I'm going to try this workout again this week, but unless something drastically improves I am going to need to back down on my goal to run a sub 9 minute mile in 3 weeks because (1) there is no way that I'll be able to hold the speed for a mile and (2) even if I could it feels awful in an "I don't want to do this to myself" way.  I think for this time around I'll need to settle for running an "as fast as I can" mile and then give myself more time to go for the gold.

Hubs and I finished The Kids in the Hall reboot reboot and loved it dearly.

The rest of my TV watching for the week was heavy on the subtitles.  I started season 2 of Fauda for my treadmill viewing and can I just say that I will not be complaining about the treadmill being boring until I finish the show (and at the rate of 1-2 episodes a week that will take a while).

Once I started Fauda I found this handy list of Israeli shows for fans of Shtisel and Fauda and picked the first title on the list, Srugim which is on Amazon Prime.  I think that the article's description of "the Modern Orthodox equivalent of Friends" is on target though it's not a sitcom.  It's a very watchable, not too heavy show about a group of friends living in Jerusalem who are navigating the dating world and I am All In on this one.

And the final show with subtitles that I watched this week was Mama June from Not to Hot!  My favorite trashy reality show is back!

I finished The Boys' Club by Erica Katz and I really liked where she went with the story.  She has a new book that came out this year but I want to read a few other things before I start it.

I cycled through a couple of titles that I couldn't get into and then went for the #1 read on my summer TBR which is Lessons in Chemistry by Bonnie Garmus. My verdict after the few chapters that I started last night is that it is living up to the hype.

There is nothing but nothing happening on the job search front, so I'm going to drop the "Bad Career advice" tag from my recaps until I have something to report.  Just know that I am still looking and I am still trying to make the most of my current job.

Posted by Birchwood Pie at 9:11 PM