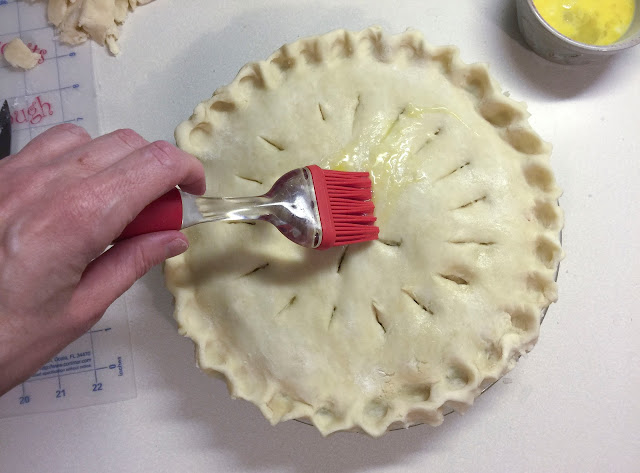 
Weekday Dinners:
M: New Year's Dinner (family bash, cooking by sister in laws #1 and #3).  Pork and sauerkraut, mashed potatoes, and veggies.  Everyone brought wine and treats.  By the end of the night, our treat tray was reduced to just two cookies.  I put a serious dent in the Christmas Crack.

T (family meal, first work day of the New Year): the curious case of the mismatched dinners.  When I packed my lunchbag that morning, I saw that we had two pieces of lasagna in the freezer, we'd had them for awhile, so I routed one of the pieces into my lunchbox and took it to work.  Well, when dinnertime came around, our vague idea that we had Christmas/New Years leftovers proved false.  The kids got hotdogs and mac and cheese, hubs got the remaining piece of lasagna, and I tucked in to the last portion of Spinach Artichoke Pasta.

W (date night): Chicken Pot Pie Soup via Two Peas & Their Pod.  I chopped the veggies the night before and whipped up a half recipe of pie crust for pie crust crackers, so that all I had to do was throw everything in the soup pot.  It came together quickly and was yum.

H (fend for yourself night): more mismatched dinners.  I had chicken soup for lunch, he had it for dinner.  I found two pieces of pizza lurking in the fridge and polished them off.

F: A fusion of date night & fend for yourself night.  Due to the temperature, there was no way we were leaving the house.  He stirred up a bachelor serving of chicken, rice, and veg, I tucked into a plate of Annie's Cheese Enchiladas.  We opened a bottle of Jose Cuervo margaritas and life was good.

S (date night):  Again, there was no way we were leaving the house, so I asked hubs at breakfast what he wanted for dinner.  The seed had been planted from Wednesday's date night soup, and he asked for Chicken Pot Pie.  I knew without a doubt that I was going to turn to Two Peas & Their Pod.   I whipped up a double batch of pie crust in the morning so that all I had to do at night was roll it out and make the filling. 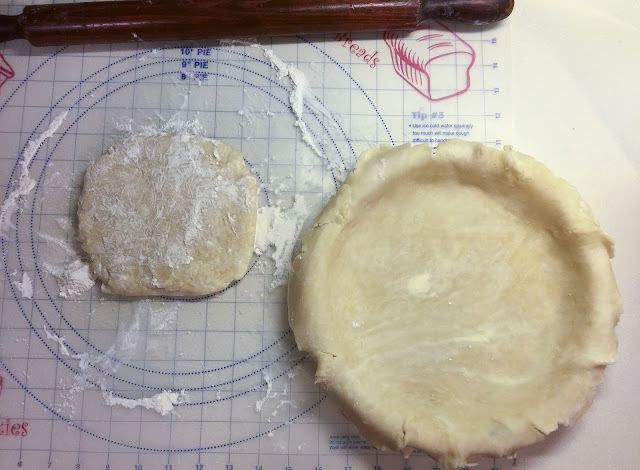 I got the pastry mat a few years ago.  Yes, it's a nice thing to have but not mandatory.  My only gripe is that it's difficult to clean due to it's size, just the nature of the beast. 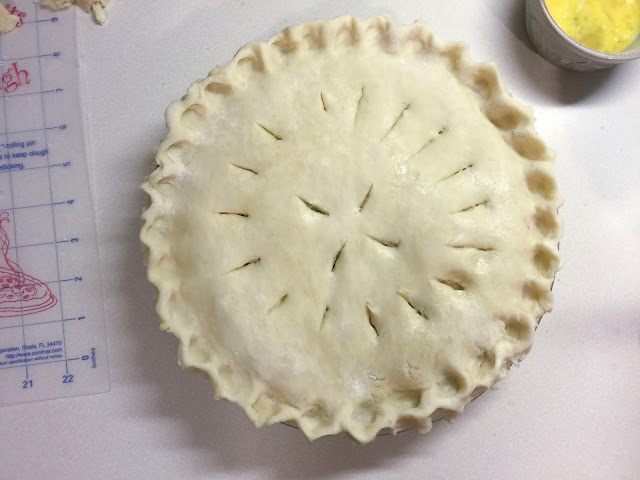 I enjoyed cutting in the steam vents. 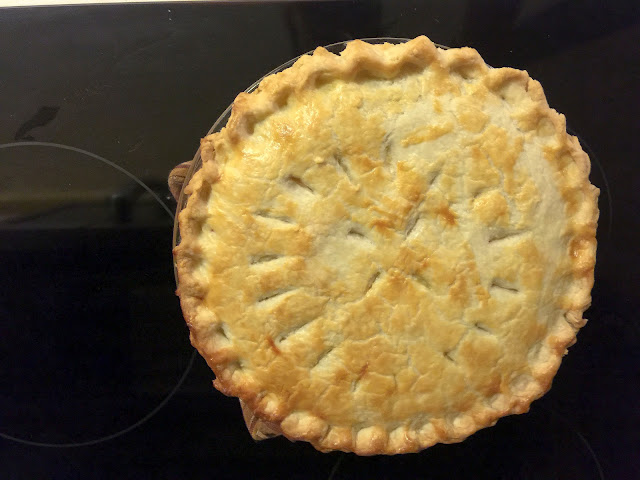 But the final proof was in the pie.  I cannot recommend this recipe enough.  Hubs was very happy.

Su (family meal): leftover chicken pot pie.  Hubs and I were happy, I got the impression the the kids weren't thrilled but they ate it.

Meal Prep:
The freezer was almost bare, so it was no holds bared meal prep.  Normally I wouldn't make more than two recipes in a weekend, but at the last minute I came across a thai curry that I couldn't get out of my head, so it was on.

PaleOMG green thai curry: I make thai curry all the time and love it, but there's something missing from the recipes I've tried compared to take out thai.  This recipe stood out because it has what I believe to be the missing ingredients: lemon grass and lime leaves.  Lemon grass was easy to come by, lime leaves were not, so I had to do without.  Other changes: since I knew I would be freezing this and I'm not paleo, I swapped tofu for shrimp and added rice.  For the coconut milk I used one can full fat and one can reduced fat.  Verdict: yum, but I can't wait to revisit this with lime leaves (ordered on Amazon) and red curry. 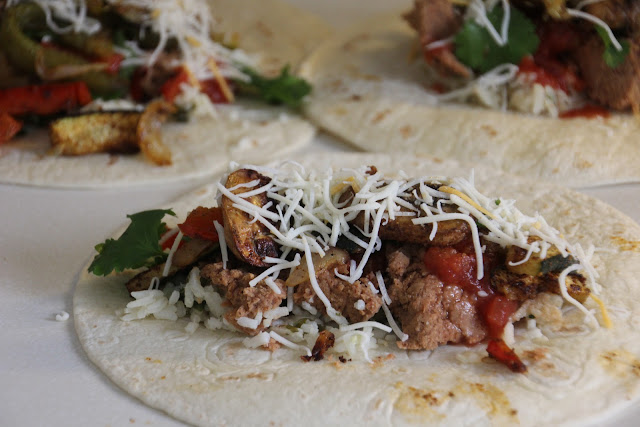 I've been dreaming on these for some time.  I started with cilantro lime rice (from the freezer), topped it with home made refried beans (recipe coming soon), cilantro, the filling from Budget Bytes Veggie Fajitas, and topped them with a little salsa and cheese before skillet toasting.  I got a dozen burritos for my effort, I'll add avocado, cheese, and salsa for serving.  I'm kicking myself for not thinking to get an extra lime to drizzle over them.  Next time!


Spinach-Mushroom-Artichoke Stuffed Shells: this was a favorite recipe from Erica House's blog.   So I headed there to get the recipe and nooooo her blog is gone.  I took a guess at the ingredients, I was pretty sure it had 10 oz of spinach, but was it 8, 12, or 16 oz of mushrooms?  I turned to google and came up with something that seemed pretty similar.  My changes: I topped it with Newman's Own Cabernet Marinara (similar to Erica, she didn't make the tomato-cheese sauce in the Food Network version), swapped cottage cheese for ricotta, and added a can of artichoke heats because obs if you have spinach and mushroom there should be artichokes. 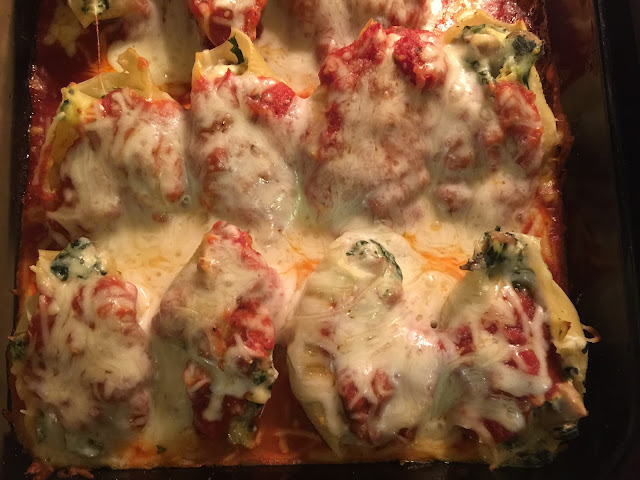 Please come back Erica!  Your blog was great and the blogosphere misses you.

Posted by Birchwood Pie at 7:42 PM