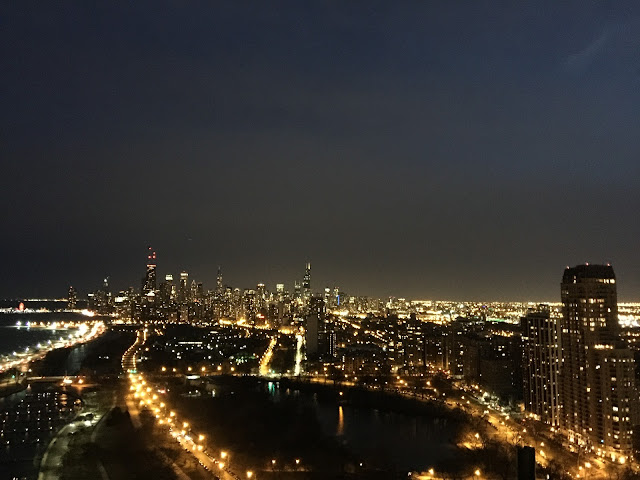 A weekly roundup: eats, workouts, watches, and reads.  Windy City and non-weight loss edition.
This week's roundup is coming to you from Chicago Land.  It's spring break, so on Saturday we loaded up the family truckster and headed for the big city.  This is the first year that I've been able to take time off at Spring Break to hang with the steps.  Chi-town is also the hometown of Sister-in-law #2 and a cousin. 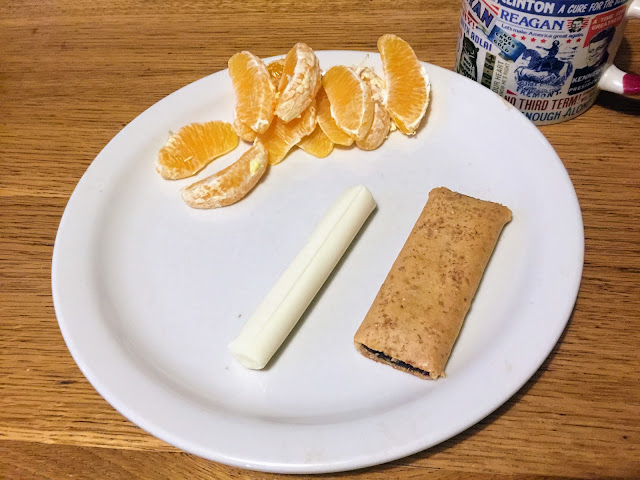 Avocado toast.  Mixing it up by adding tomato. 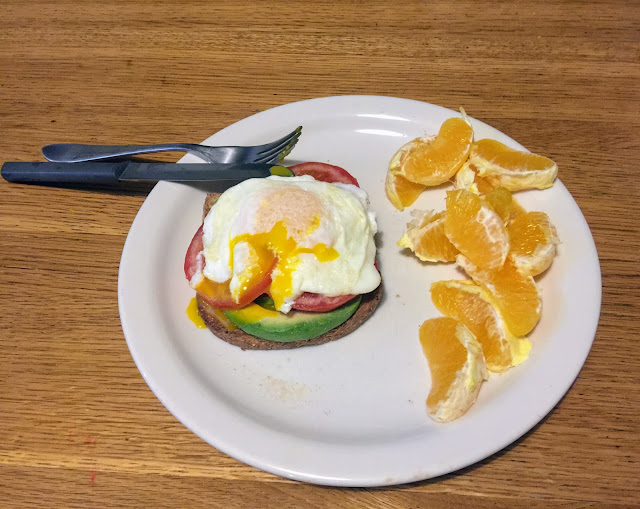 And as always, Breakfast Burritos

Weekday Lunches
M,T,H,F: Chrissy Teigen's Drunken Noodles.  Will make again soon.  I'm dying to get some tofu in there to soak up the yummy sauce. 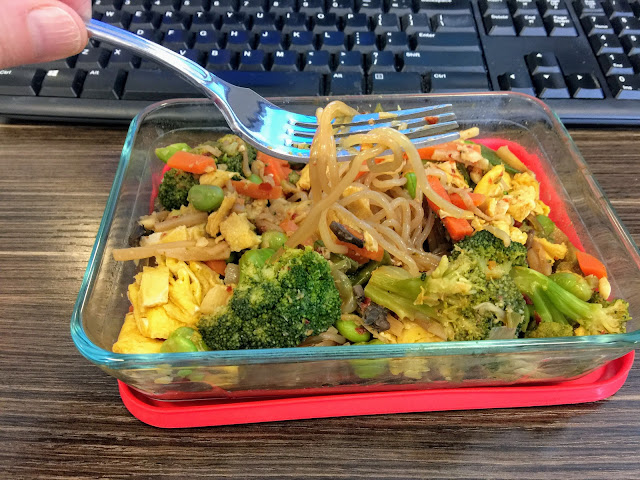 Weeknight Dinners
Monday: It was only child night, since stepson #2 was away at a school party.  Husband headed straight for the freezer and came up with the last serving of lasagna for stepson #1 and helped himself to the chicken burrito that I made for him a few weeks ago.  Yours truly had a veggie burrito.

Tuesday (family meal): it was rush and hubs had dinner on the table when I got home.  The classics: nuggets, mac n'cheese, and veg. 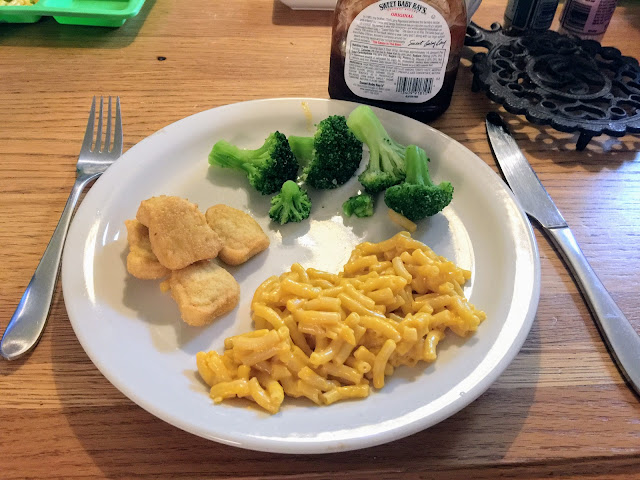 Thursday (fend for yourself night): Baked ziti for him, veggie burrito for me.

Friday (the night before vacation): take out pizza. 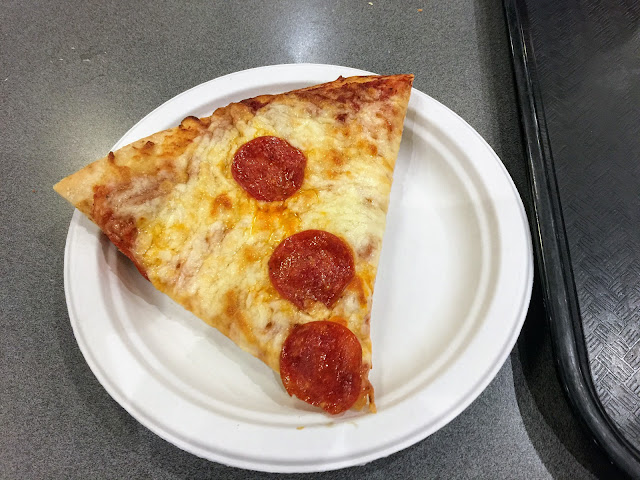 The funny thing is that I'm kind of a fast eater, stepson #1 is an average-to-fast eater, hubs is a very slow eater, and stepson #2 is an excruciatingly slow eater.  I gobbled down my slice and was shocked when I looked up and saw everyone else finishing up within a few bites of me.  We were hungry. 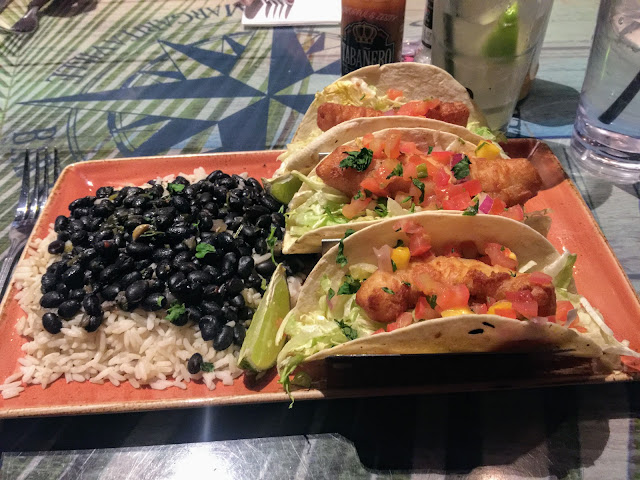 Meal Prep
We don't have a kitchen this week, so none.  I made a batch of Banana Bread Chocolate Chip Muffins to take on the road for snacks.  We're doing meals on the fly.

Other
Workouts: the usual round of treadmill runs and walk, two weight lifting days.  Running is feeling so good that I'm toying with adding another running day on Sunday (though not this Sunday since we spent all day walking at the museum).

I said that I would update my weight loss progress for the month today instead of waiting until the end of the month because of vacation.  Yep, nothing to report.  I had a health scare that turned out to be nothing, but it took two weeks to find out that it was nothing, and that got me off my game (I'll write more about this someday).  I've been clocking in the high 130's lately.  My goal for March was to get down to 135, so I've bumped this for my goal for April.  I'm not weighing myself or making any attempt to diet until after Easter.

Watching (from the couch): Date night was epic.  Brooklyn 99 is finally back.  On top of that, Mr. Big Spender surprised me by coughing up for a Starz subscription so that we could catch up on Ash vs Evil Dead.  I think I touched on our finances before, some people would say we're cheap, but we say that we're very picky about spending our money on things that please us.  Cable isn't one of those things, so TV in our house comes from the internet.  We have Netflix, Hulu, Amazon Prime, the library, and if there's something else that we want to see, we buy individual episodes or pick up a subscription to an app for a month.  Hubs splurging for Ash meant as much to me as a piece of jewelry would have.

Reading:  The Good House. Unreliable Narrator books are my jam.  I have no clue where the story is going and I'm enjoying the ride.