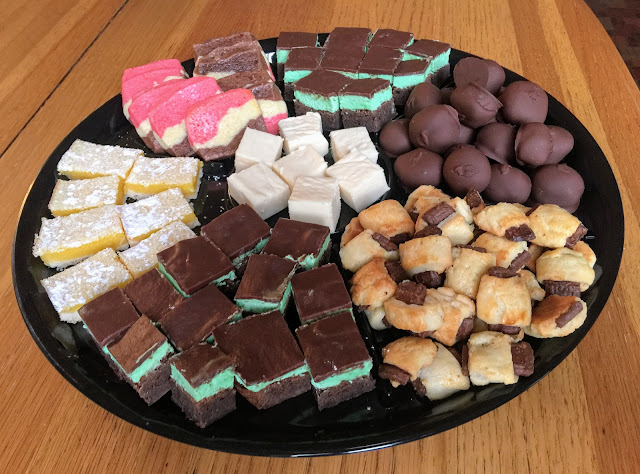 A weekly round up: eats, workouts, watches, and reads.  Christmas Baking 2018 Edition.
For the second year in a row, this has been my favorite week of the year and possibly my life.  Hubs and I both get to spend the rest of the year at home (yeah we do have to work here and there but we don't let that get in the way of our fun).

This was my second Christmas morning with the stepsons.  They've both taken to sleeping in pretty late on non-school mornings so I wondered how that would play out on Christmas morning.  Sure enough, the Christmas Spirit is stronger than a child's growth spurt and both boys were up bright and early to tell us that Santa was here.

And what a difference a year makes for weather.  Stepdog and I are always down for an extra walk, but we're liking the latest spell of 40 and 50 degree days a lot better than last year's arctic freeze.

Breakfasts
I made myself a present of a brand new batch of breakfast burritos on Christmas Eve morning. 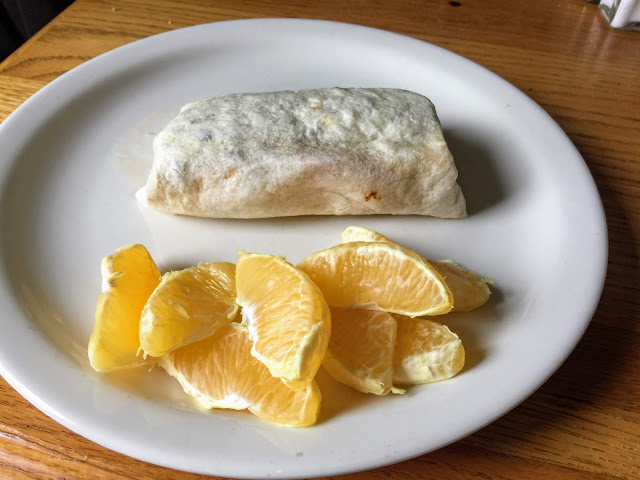 Hubs made us all bacon and eggs for Christmas Day. 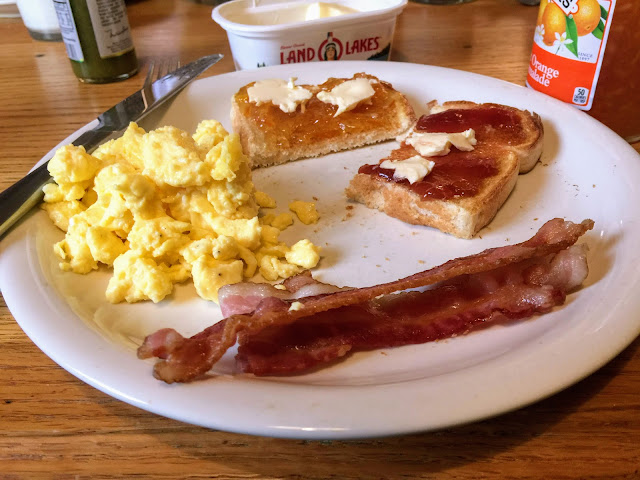 And an epic breakfast quesadilla to start off the weekend. 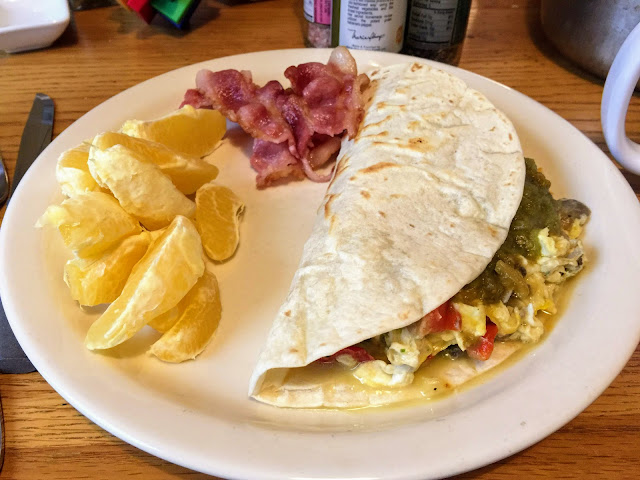 Lunches
Oooh look I ate some vegetables!  Salad and veggies are leftovers from our Christmas dinner, the salmon and dressing are from Skinny Taste. 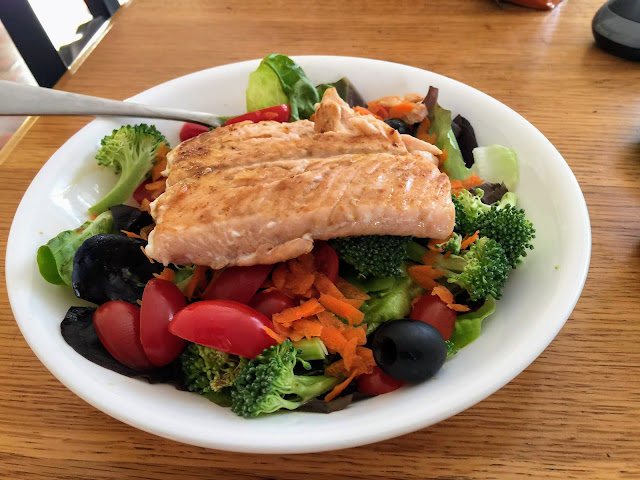 I cleaned out the freezer and finished off my stashes of veggie burritos and spinach artichoke pasta. 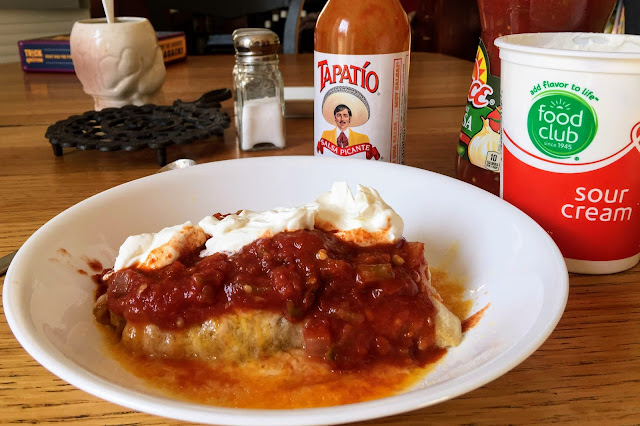 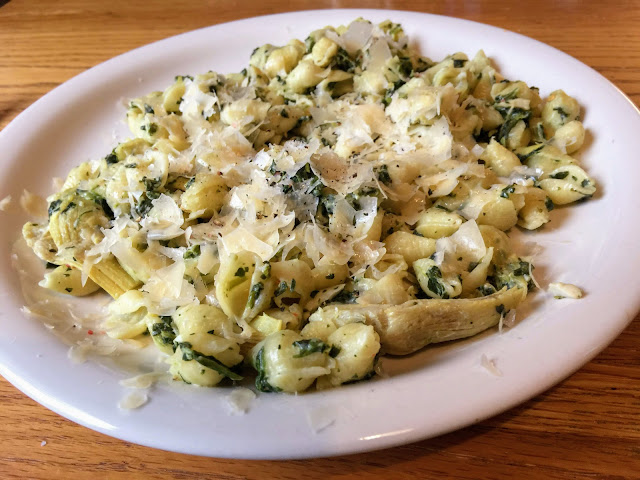 And for today's brunch, I finally made Macheesemo's sweet potato breakfast burritos!  I skipped the egg since I wanted to stick with a smaller tortilla/portion size.  Yum, yum, yum! 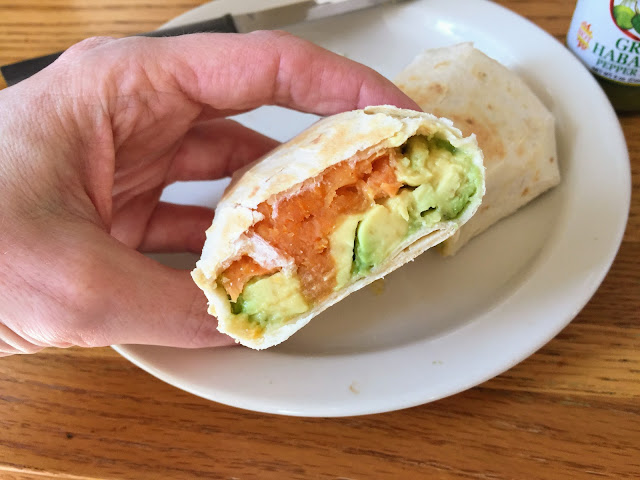 Dinners
Monday (Christmas Eve): hubs and I went to my 'rents for veggie burgers.  The step kids joined us later in the evening for cookies and Raymond Brigg's Father Christmas (as read by my mother, family tradition since before I can remember).

Tuesday (Christmas family bash): the party was at our house, with the divide and conquer approach
Wednesday & Thursday (empty nest nights): leftoverpalooza.  Ham is so amazing the first night and such a drag after that.  But it was there and neither of us was motivated to make anything else. 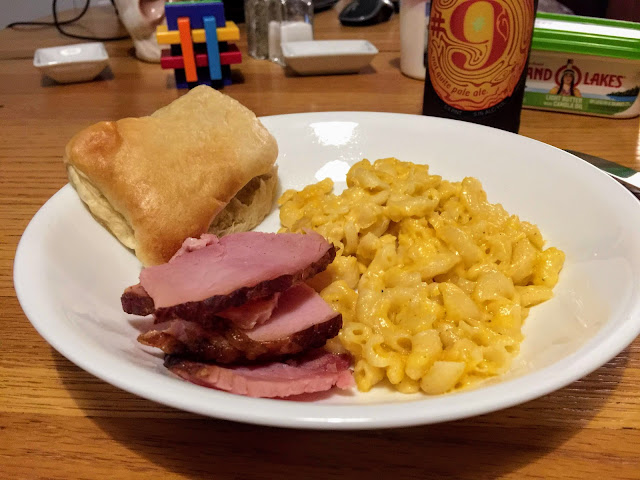 Friday (family meal): ooh look I ate more vegetables!  I had intended to make Gimme Some Oven's Everyday Curry for lunch but the day got away from me.  Hubs and I couldn't face another night of ham. I made the curry for myself and he got pizza for him and the steps. 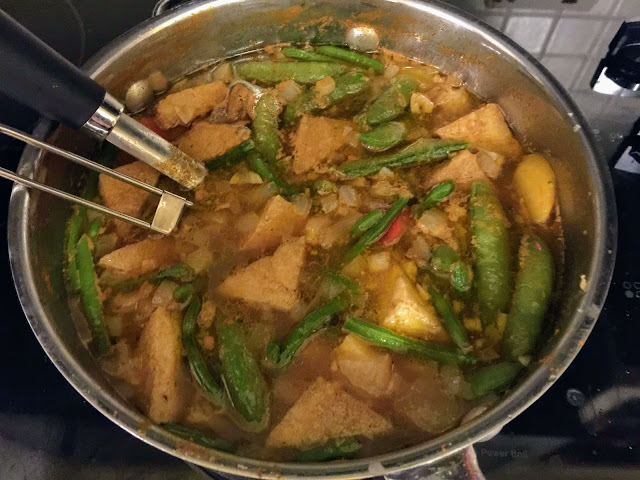 What I'm most proud of is that I had all of the ingredients at home.  The veggies are from the massive bag of stir fry veggies that I got at Costco a while ago, I baked the tofu, and used red curry paste since I like that better than green.  I also added some kefir lime leaves (idea credit: PaleOMG).  And my beloved glass noodles to finish it all off. 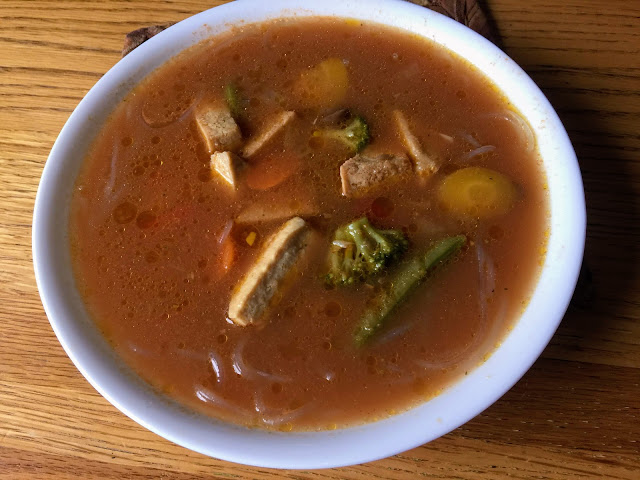 So there you have it, yet another Gimme Some Oven success story.

Saturday: another Christmas celebration since sister-in-law #1 and her family are in town.  We have a very strict custody arrangement with her in laws.  We trade off Christmas and New Year's...this year the in laws got them for Christmas and we have them for New Years.  The menu:
Sunday (family meal): hubs and steps had leftover ham and mac and cheese.  I had another bowl of curry.
Christmas Baking Recap
Here is what I made, when I made it, and what everyone thought: 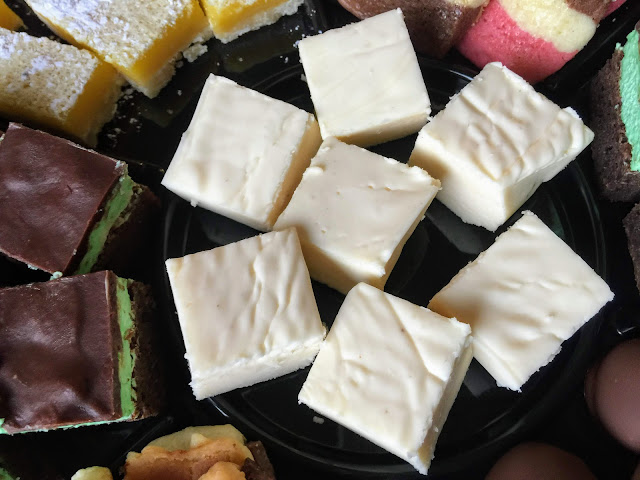 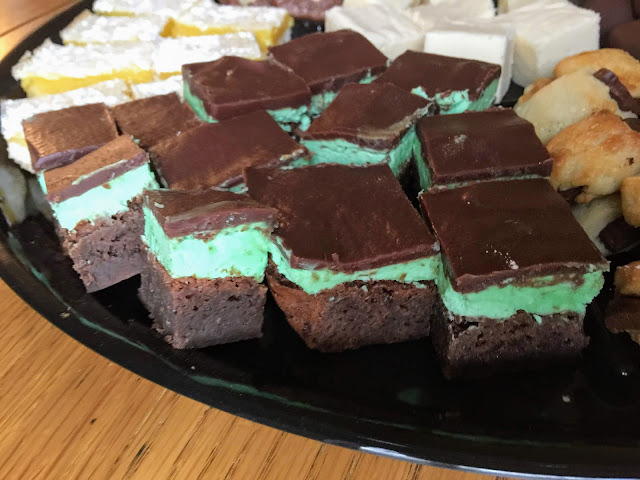 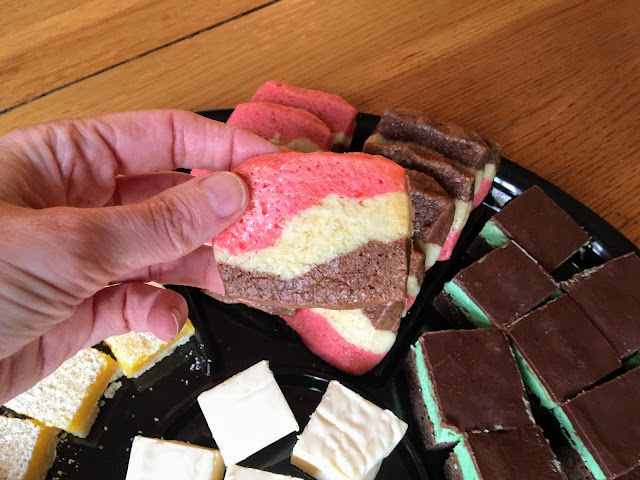 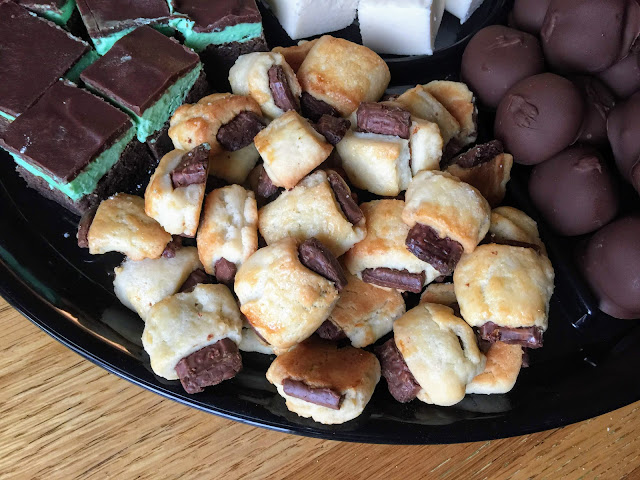 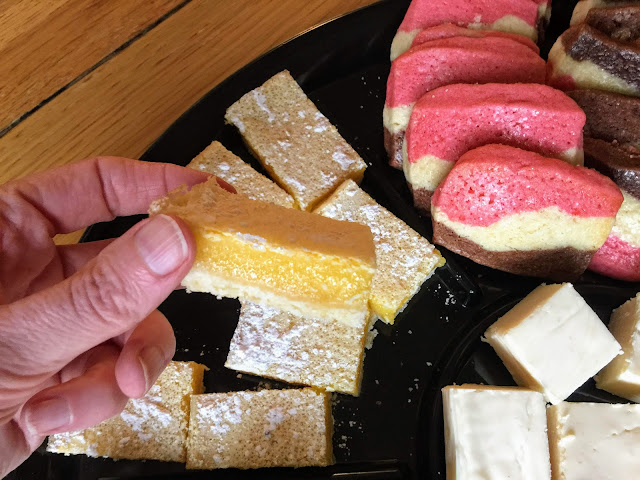 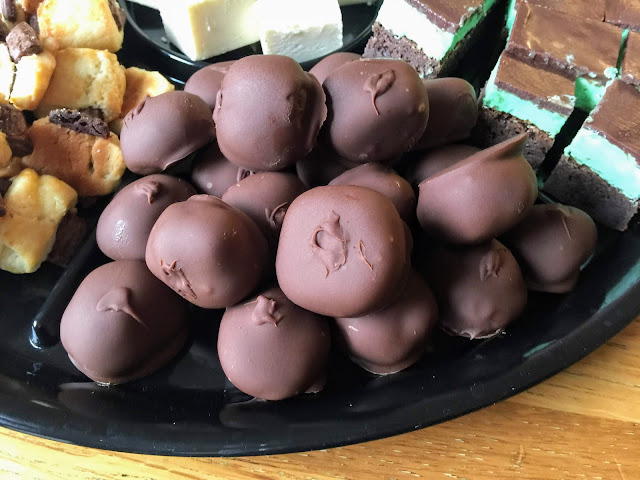 Meal Prep
We really don't plan our meals this time of year since for the most part we're eating with family and friends.  I have a ton of the curry left over (yay!) and made a double batch of Sweet Potato, Corn, and Black Bean enchiladas to rebuild my freezer stash of food. Standard recipe changes - green sauce instead of red, mix the red pepper and cilantro into the mix instead of using them as garnishes, and add a bit of lime juice for good luck. 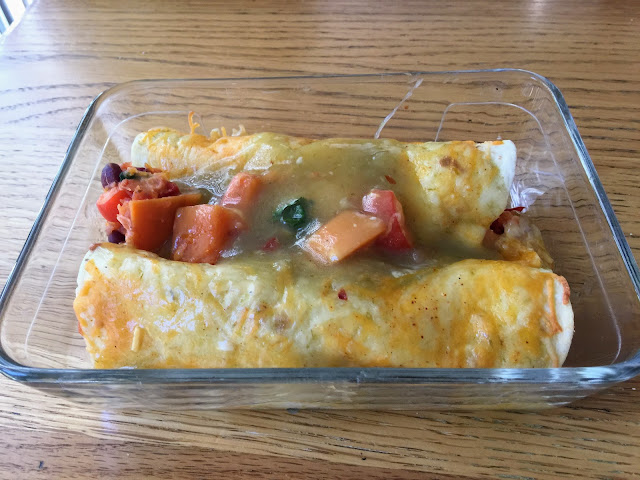 I can't believe that I didn't notice until now that these enchiladas are from the same blog that has our favorite s'mores bars!  I should have figured it out since what both recipes have in common is that one batch is not enough, you need to double them at a minimum.

Workouts and a New Toy
Thanks for asking, I did take some time away from eating this week to make workouts happen.  But first up, let me introduce you to my new workout buddy. 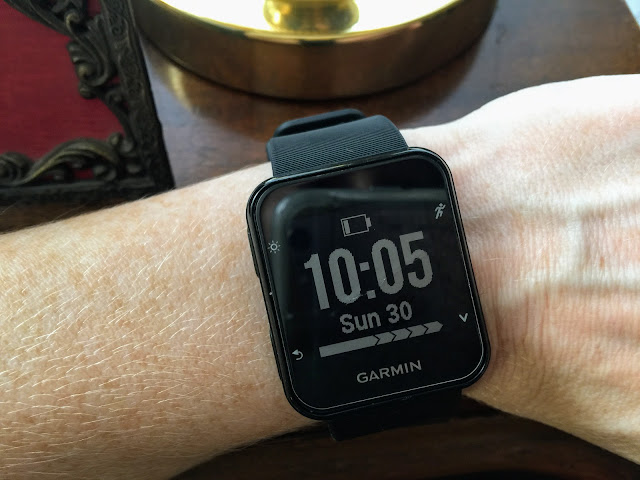 As I've written before, I adore my ancient Garmin and Fitbit - they both have some age related drawbacks but they weren't broke and I wasn't interested in spending a few hundred bucks to replace them. Then Brittany wrote about her Garmin F35 and I realized that $135 was the price point that made sense to move on from both.  Best of all, Santa put it under the tree for me (hubs and I are more into experiences than gifts, so our gift giving is pretty light, so this is one of the rare times that I actually wanted something for Christmas).

I'll be talking about the new Garmin as we get better acquainted (in addition to tracking my every move he will also be my alarm clock so we will be very close).  I just need to think of a nickname for him.  Garmy? Garth?  That was the one clear advantage of the Fitty the Fitbit, she kinda nicknamed herself.  And yes, some of my every day inanimate objects have nicknames and genders, don't yours?

I do miss my Fitbit pearls tho... 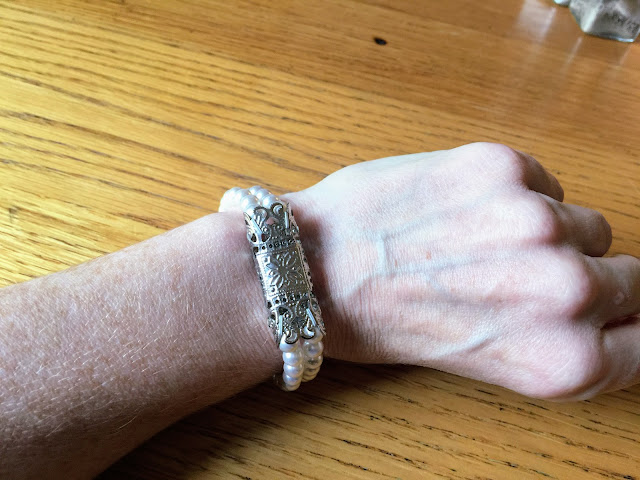 So anyway, workouts! 28 miles in the books.
Monday: weights and 3 mile treadmill run.
Tuesday: my first run with the new Garmin!  Six miles on my favorite neighborhood running loop.
Wednesday: off
Thursday: 7 mile treadmill fartlek run, 1 minute hard/1minute easy.  I did one mile easy warm up/cool down and 2 miles of 6.0 hard/5.5 easy, 1 mile of 6.5 hard/5.5 easy, and 2 miles alternating 6.0 and 6.5 as the hard interval.
Friday: weights and 4 mile outdoor run.  We had a warm spell so I got to run in a tank and shorts outside in December.
Saturday: One of those rare days when I did not feel like working out.  I had promised myself that my long run would only be 8 miles but even so it took every ounce of willpower that I had to get off my butt and do it.  The weather turned and it was really nasty outside, so I headed down to the treadmill and bribed myself with some quality TV watching to get through it.
Sunday: rest day!!!

Watching
From the treadmill: I finished season 4 of How to Get Away with Murder and it looks like I'm taking a break since the first few episodes of season 5 aren't online right now.  For running, my heart belongs to The Marvelous Mrs. Maisel.  I left off in the middle of the 2nd to last episode of season 2.


From the couch: Hubs and I saw A Beautiful Mind and Roadhouse via Rifftrax.  The same folks who did MST3K.  On my own I polished off a few more episodes of The Haunting of Hill House.