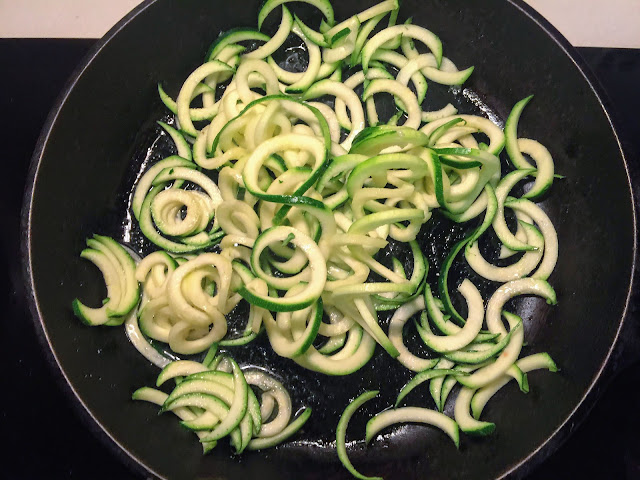 A weekly round up: eats, workouts, watches, and reads.  Zoodles edition.

This week was insanely busy on the work front so I turned meal planning over to my better half and went with the flow. Zoodles were had and I took back to running with a vengeance.

Breakfasts
Monday: Fail.  I had some protein powder after my workout and took a cereal bar, string cheese, and fruit with me to work.  It was an insane morning and I just never had a chance to eat. 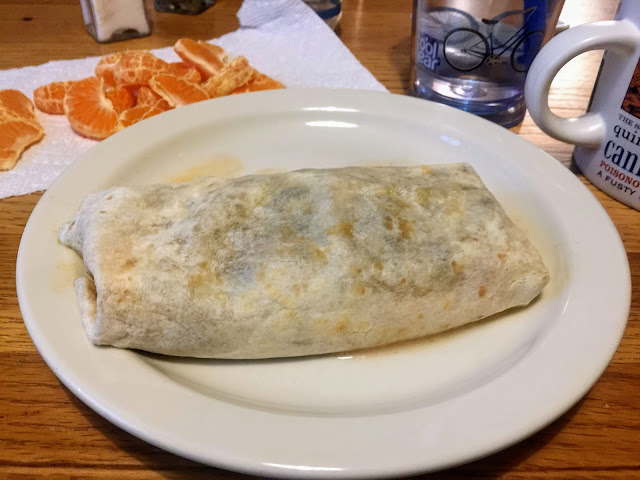 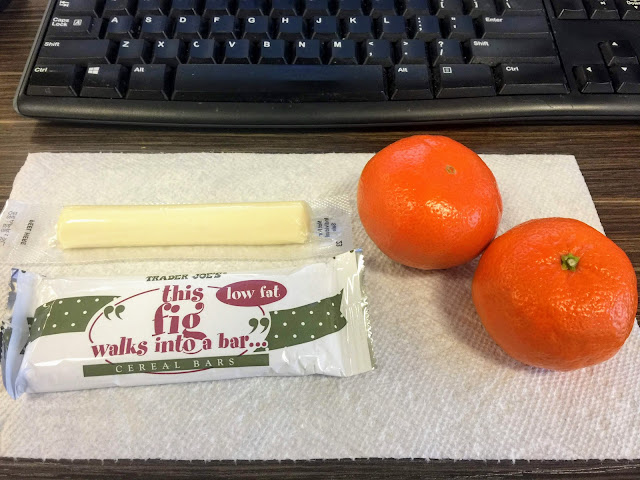 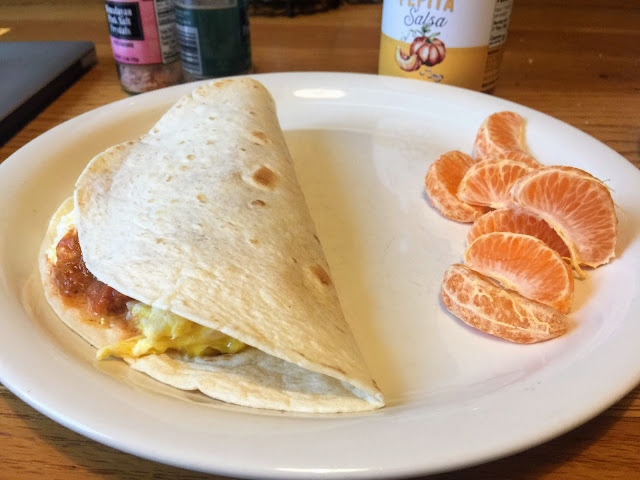 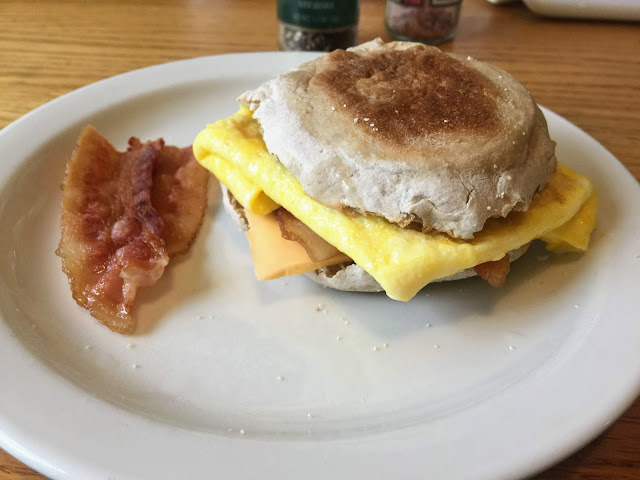 Sunday: your eyes do not deceive you, it was an ultra rare cereal breakfast.  I didn't want a full meal, I just wanted a lil' something so I joined stepson #2 for breakfast and had what he was having. 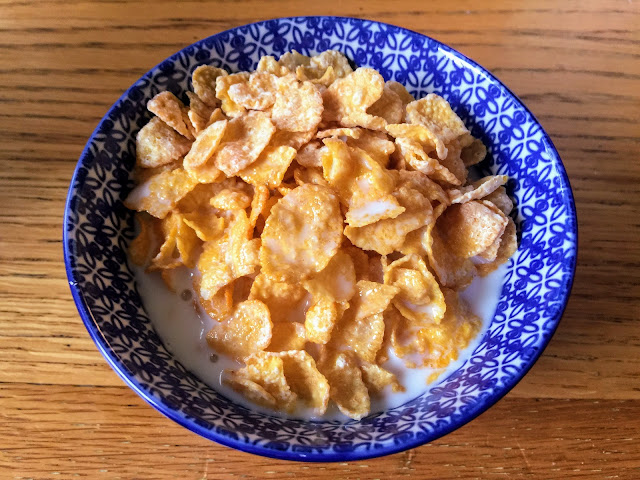 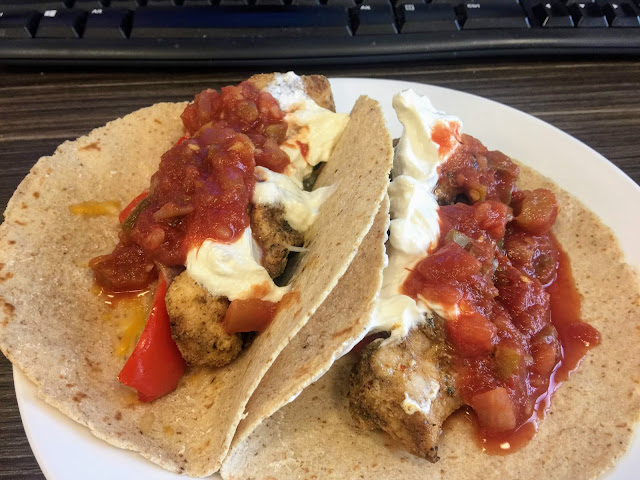 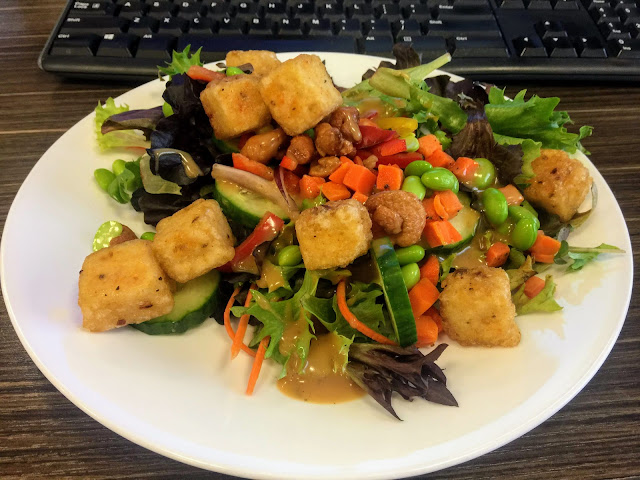 Thursday: lunch date with my guy!  Spicy Southwest salad at Chik Fil A 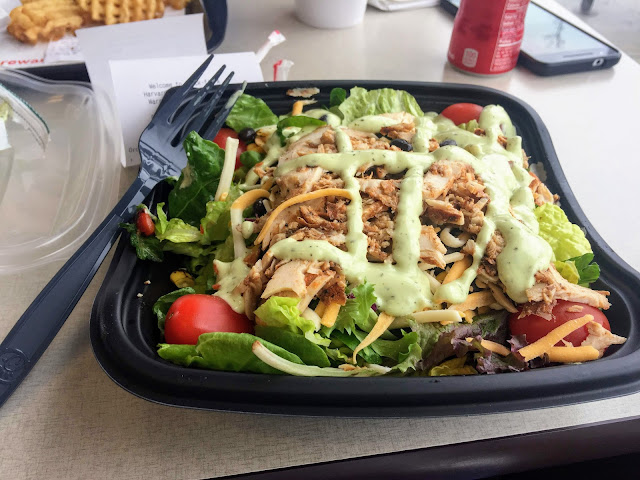 Friday: Unpictured frozen riced cauliflower bowl from Trader Joe's.  I sometimes pick up frozen meals from TJ's because I'm curious but usually I find fault with them.  Not this one, it was a complete win of healthy + amazing staying power for a 300 calorie lunch.

Saturday: It's hard to tell what's going on here!  An overstuffed tortilla with the last of the fajita veggies, some Trader Joe's Chipotle Bean Dip (which has been super convenient to have around the house), and a mess of salsa, sour cream, and cheese. 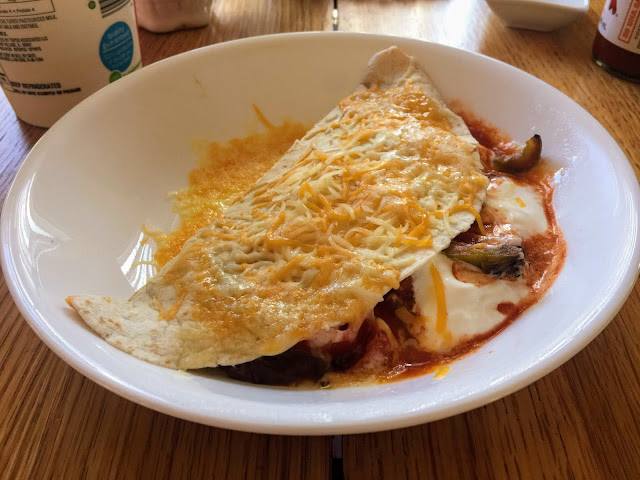 Followed by Everything We Love Cookies.  Hubs and I took most of the leftover cookies into work, leaving a small stash at home. 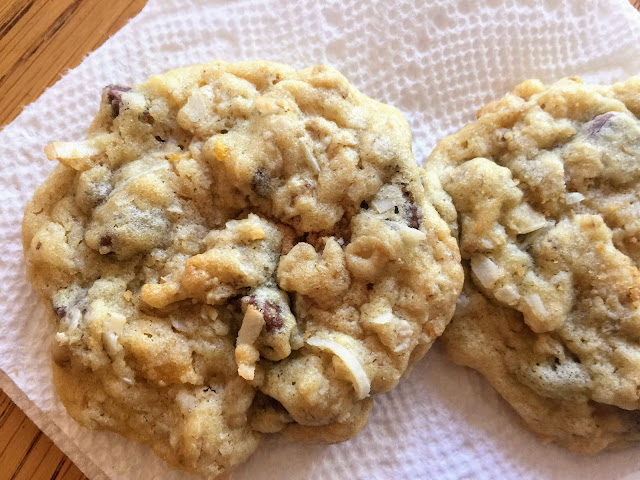 Dinners
Monday (family meal): Hamburgers via my husband.  Lesson learned, I will leave meal planning up to him more often. 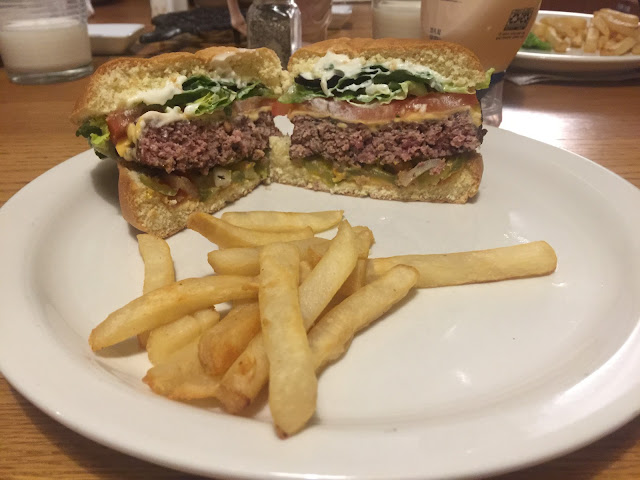 Tuesday (family meal): I came home to find my husband making what he called "field expedient burritos".  He made cheese quesadillas for the kiddos, and a heartier burrito with a frozen breaded chicken breast and rice from last Sunday for himself.  I followed suit with a spontaneous rice and bean burrito (via the aforementioned bean dip from Trader Joe's). 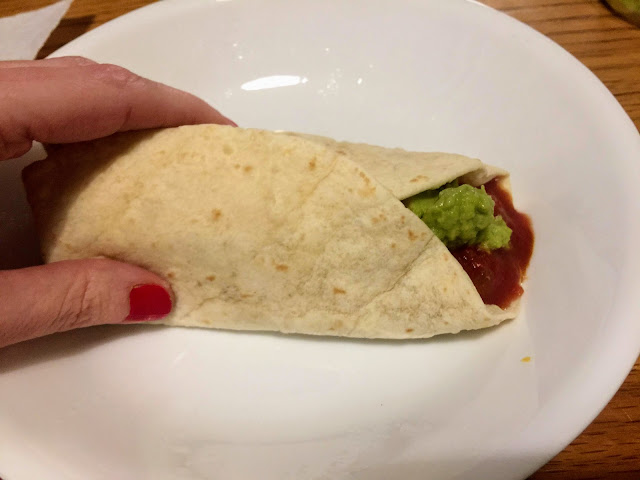 Wednesday (date night): Just because I was busy at work doesn't mean I can't step it up.  Flat iron steak, mashed potatoes, and salads. 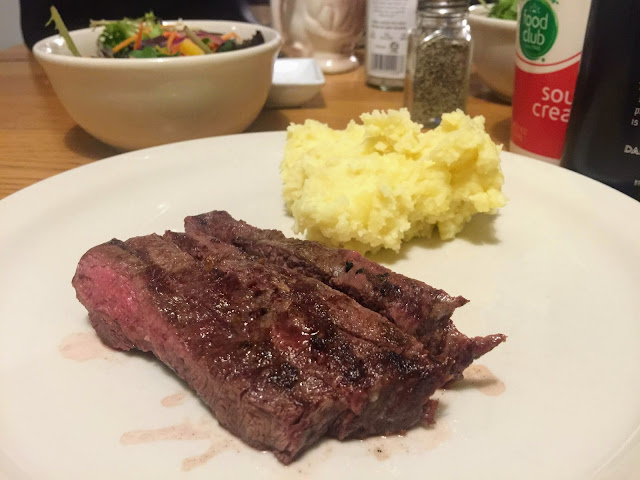 Thursday (fend for yourself night): Since we had a lunch date that day, I brought home my stash of chicken fajita mix and we finished it off. 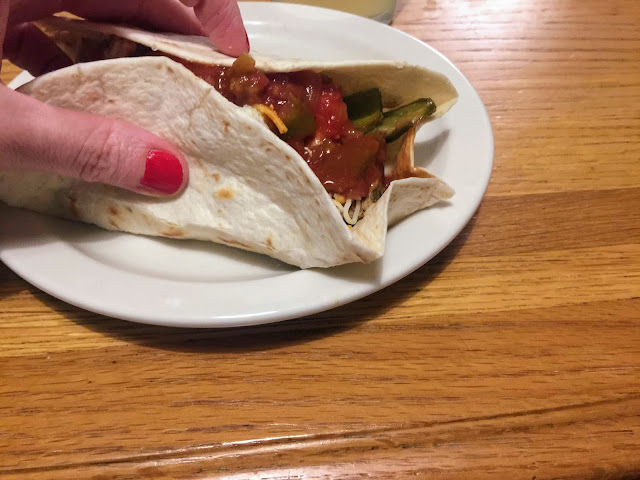 Friday (family meal): Averie Cooks 15 minute chicken, vegetable, and ramen stir fry I'd been wanting to make this for the fam ever since we had it for date night a few weeks ago.  I made it exactly the same way that I did before, using what I had in the house and leaving the chili garlic sauce out of the main dish and only adding it to my bowl.  The only thing I would have done differently is to increase the recipe a bit, since it was a bit skimpy for the four of us.  I had to cut back a bit on stepson #2 and my portions to make it work (don't worry, we both had extra dessert to make up for it). 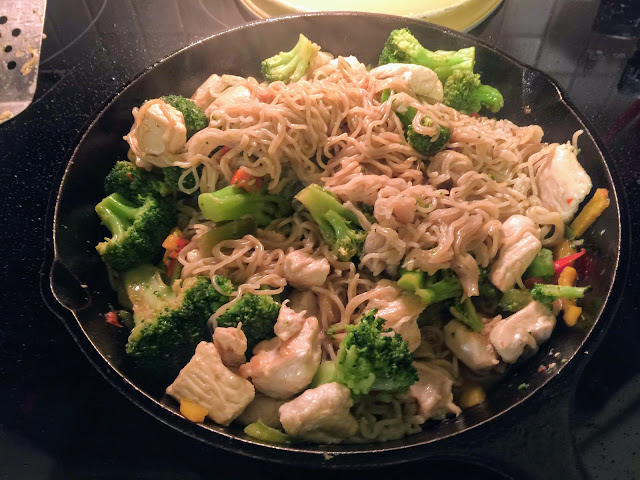 Saturday (family meal): It was long run day and I wanted to eat AllTheFoods but couldn't think of a specific thing that I wanted to eat let alone come up with a family meal.  Hubs stepped up and suggested spaghetti.

As I warmed up to the idea, I remembered that one of my sisters-in-law brought zoodles to our last few family pasta dinners and that they were really good.  As you may be aware, I'm not a low carb girl (other than, you know those times when I choose to eat one donut instead of three) but I am a fan of mixing zoodles in with pasta (here's my favorite example and wow it's been too long since I had this).   So I got a zucchini and spiraled it up.  I sauteed it for a few minutes in a 'lil butter/olive oil/salt/garlic powder and let it sit in a strainer for a minute after.

This is spaghetti with Budget Bytes Best Weeknight Pasta Sauce (tough to see but there really is pasta in there with the zoodles).  And yes weeknight pasta sauce is great on the weekends.  I was especially tired from my run and even so this was so easy to make and really hit the spot.  From start to finish 40 minutes with 15 minutes of hands on time. 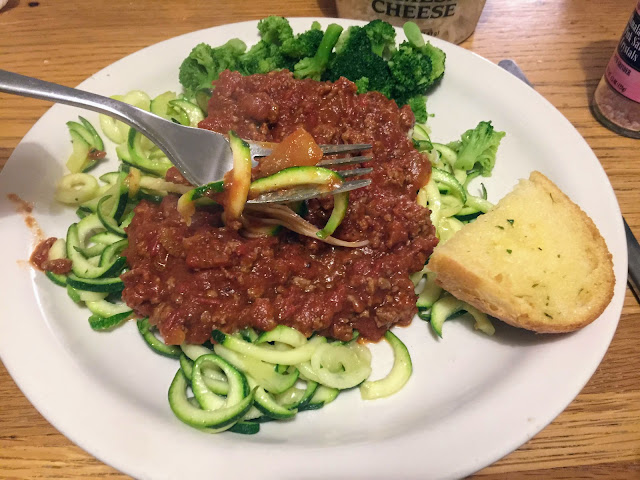 Full disclosure: kids gotta eat how kids gotta eat.  My stepsons love lasagna, but they think it is crazy weird that anyone would put tomato sauce on spaghetti.  Their plates were plain pasta with butter, salt, and onion powder, garlic bread, and broccoli.  On the one hand, it's so bizarre that I'm calling it out but on the other way more important hand, I think that their way of eating is much healthier than the way I was brought up.  As a child I was never given the choice of what or how much to eat and had to stay at the table until my plate was clean.  That led to just a few food issues. 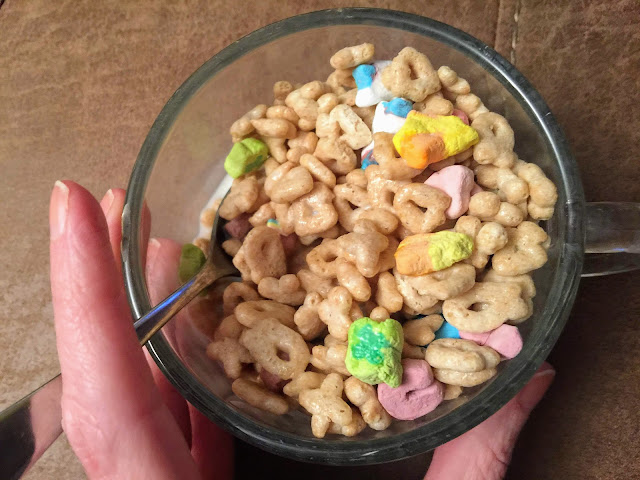 Sunday (family meal): leftover spag for adults, more plain buttered noodles for steps.  I really missed the zoodles but not enough to go to the grocery store.  We had the last mini ice cream cake from a certain stepson's birthday last month for dessert. 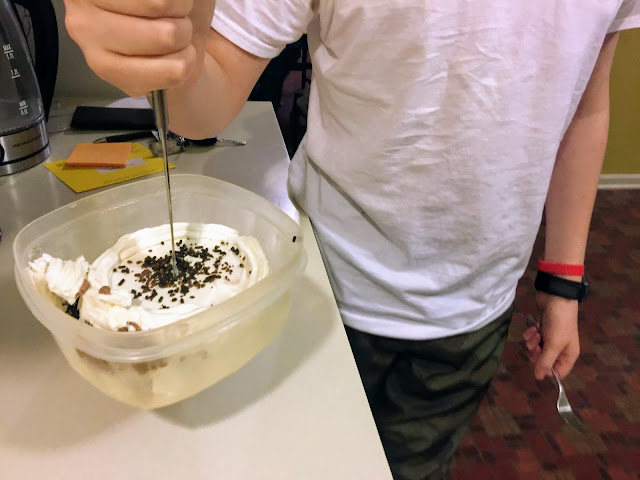 Meal Planning/Prep
Nut n'Honey.  We have a tentative plan for a grilled chicken dinner and there's one leftover portion of spaghetti.  After that shenanigans are planned.  All I can tell you at this time is that someone else will be cooking for me for most of next week.

Workouts
Last week I came down with a sore hip and had to take a few days off running.  This week I came back like a champ and knocked out 30 miles. I was finally able to increase my Monday & Friday runs from 3 miles to 4 miles, which I've been wanting to do forever.  I've definitely been feeling some extra stamina in my workouts lately which is very nice.

Monday: weights and 4 treadmill miles, easy pace since I'd run the day before.

Friday: weights and 4 treadmill miles with some hill intervals.  OMG, the hills killed me and I had to take very long recoveries between them.  This was definitely the struggle bus workout this week. 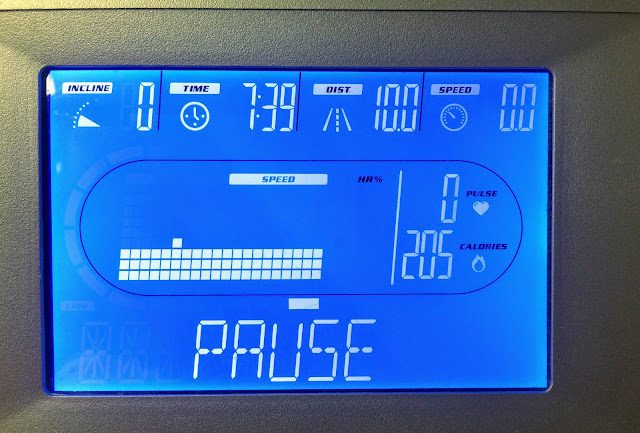 Sunday: off and loving life.

Thoughts on Half Marathon Training Plans (my first half is in May): my current plan is to keep doing my own thing instead of following a formal training plan.  I very loosely did this in Nov and Dec and was planning to start Hanson's but (1) there's no way that I can do all of the workouts with my current schedule and (2) my spidey sense is telling me that my body is not going to just up and adapt to running 40+ miles a week from where I am now in the next few weeks.  I can't even begin to tell you the number of blog training recaps that I've read with the Hanson's-is-awesome-[six weeks later]-I-got-injured-and-had-to-drop-out-of-the-race arc.  I kinda suspect that Hanson's is great for experienced runners and not as great for us mere mortals, though I appreciate the ideas that I've picked up from the book.  And I really appreciate all of the real life training stories that I've read out there in BlogLand.

At this point I've done a number of 10 mile runs and one 11 mile run and one 12 mile run.  Given that a lot of half training plans don't go over 10 miles for long runs, I feel very confident that I'll be able to finish the half in one piece. So imma keep on doing what I'm doing.