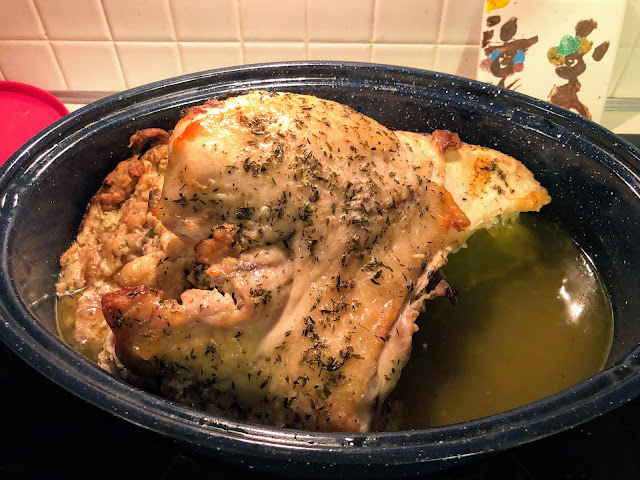 In this week's edition, hubs and I made Thanksgiving dinner for two and then helped out with Thanksgiving for a crowd.

Thanksgiving was a little different this year.  We had no kids and the various in-laws claimed all of our family on Thursday.  So hubs and I had our first ever solo Thanksgiving on Thursday and we had our big extended family meal on Friday. 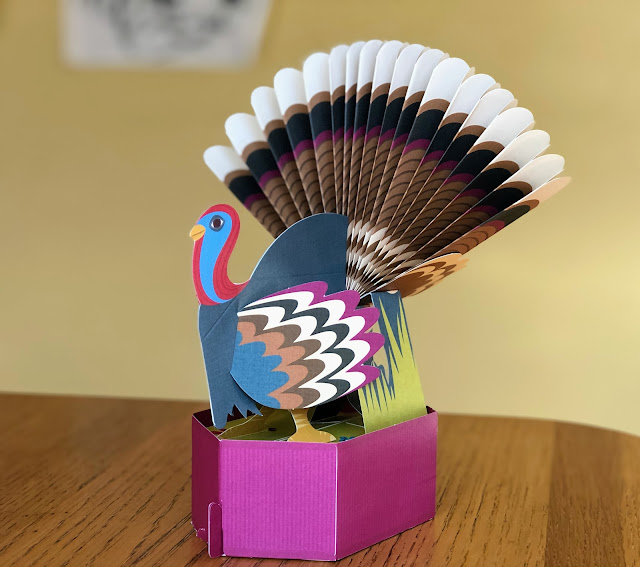 Before we go any further in our tale, I need to tell you that I have a few deep rooted food aversions and turkey is pretty much top of the list.  This dates back to childhood and the Clean Plate Laws that existed at the time.  Thanksgiving is a bit of a touchy holiday for me, I'm here for the family time and the gratitude a bit more than the food.

Thanksgiving for Two (Semi Homemade Edition)
Hubs and I brainstormed our menu.  He wanted turkey, I wanted green bean casserole.  We both wanted stuffing, mashed potatoes, rolls, gravy, and apple pie for dessert.

For the turkey, stuffed turkey breast was pretty much the universal recommendation for a small Thanksgiving dinner.  In my head I was imagining something the size of a chicken breast.  I headed off to the Posh Grocery Store in our town and marched up to the meat counter and learned that a turkey breast is um, just a bit larger than a chicken breast. 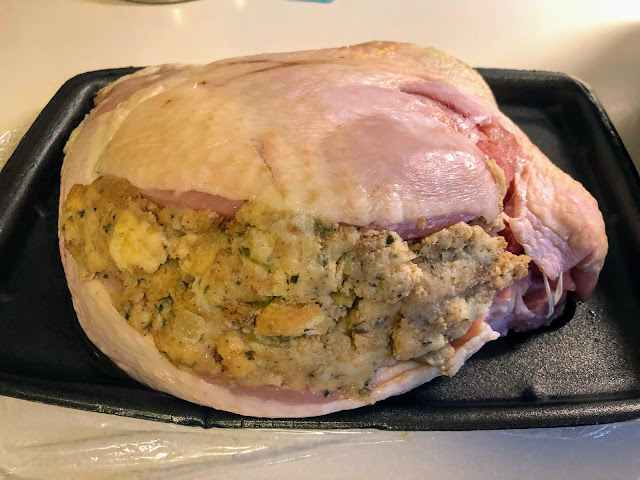 Since the turkey already came with stuffing, I didn't need to make any and I also decided to scrap my green bean casserole making plans in favor of picking some up from the deli. 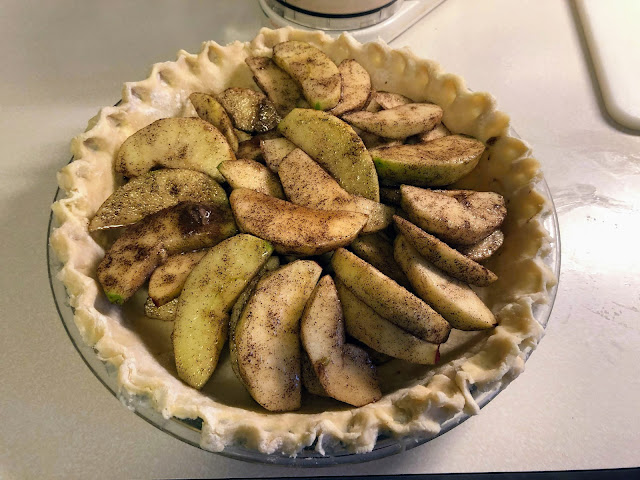 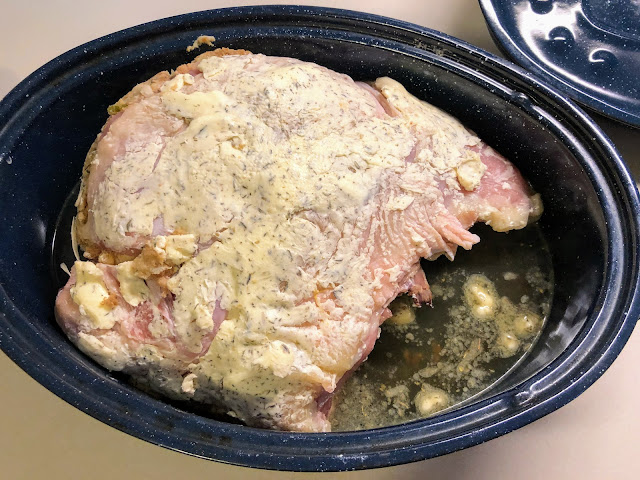 Here's my plate, and how I deal with childhood food traumas as an adult: I just have a few bites.  Not pictured: the second helpings of green bean casserole and stuffing or the mountain of gravy that went on top. 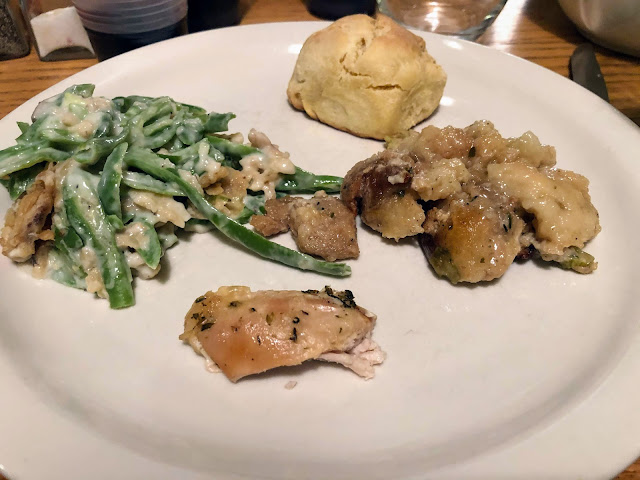 We also did a blind taste test for the three wines that we go back and forth between: Apothic Red, Cocobon, and 19 Crimes.  The goal of the test was to pick which was our favorite and also to try and guess which was which.  We both picked Apothic as our favorite (and both noted that it was a narrow margin of victory, all of the wines were good), and both guessed incorrectly on which wine was which. 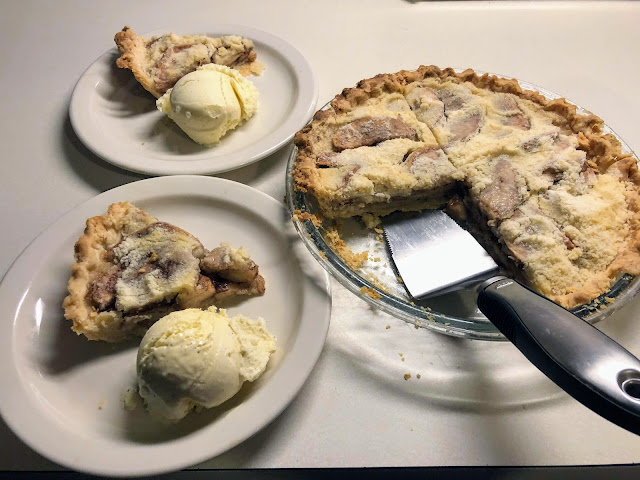 Thanksgiving for a Crowd
We had our family dinner on Friday at SIL#3's house and did our usual divide and conquer on the meal.  We brought rolls (homemade, used a new recipe that was OK but not fabulous), mashed potatoes, and chocolate chip cookies.  They made a deep fried turkey, and again I tried a bite and I'm sorry to say that I couldn't tell any difference between the fried turkey and the roasted one that we made the day before.  But my husband was a big fan and you might want to take his word over mine for this one.  I chowed down on SIL#4's green bean casserole and stuffing.

Leftovers
We made creamed turkey, which my husband adores, and you'll have to take his word for it because I've had my fill of turkey for the year. 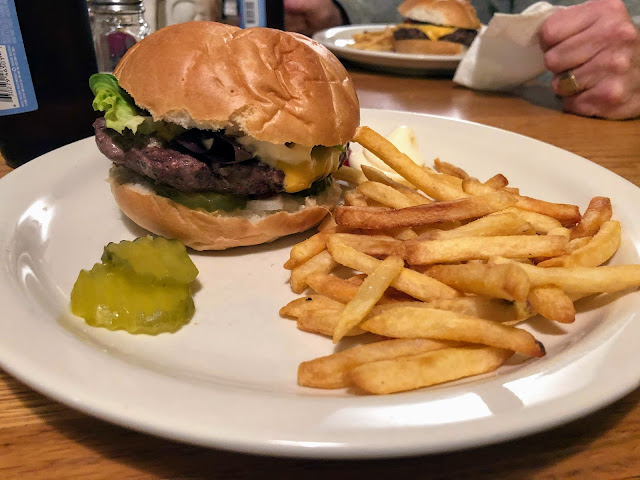 Posted by Birchwood Pie at 7:49 PM