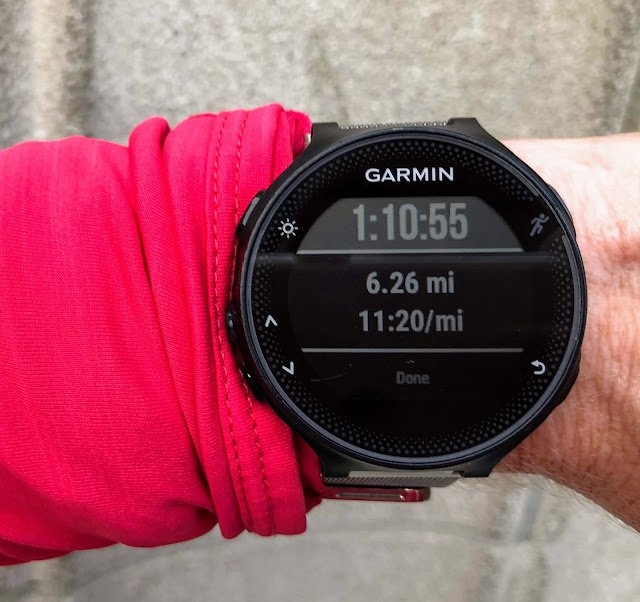 In my experience, race week goes one of two ways:
This week was: the last few runs before race day were magic, the running on race day was just OK but the race itself was just such a neat experience that I will take it.

Wednesday: 3 treadmill miles, easy with a few strides.  Work was extreme and I didn't have a prayer of getting away to lift, so no weights.

Friday: off, no weight lifting due to a work lunch.

Saturday: A Christmas Themed 10k in the Big City.  Getting to the Big City is kind of a pain, but this race has such a unique local theme that I knew I had to do it at least once.

I got there mega early so that I wouldn't have to stress over parking or rush through packet pickup.  Winter racing is of course always a gamble (heck, let's be honest any outdoor activity year round is always a gamble) but it was a beautiful winter day: 100% clear roads, no wind, and temps in the low 30s.

The race was a 5k/10k run/walk with dogs welcome.  The combination of different distances, speeds, and species *can* be a recipe for disaster, but this race had things figured out.  The start line was the same for everyone, with runners starting first and walkers starting 15 minutes later.  The 5k course was point to point and the 10k was out and back so even though it was a huge race, there was plenty of space for everyone.  The first mile was a bit cramped but after that it was smooth sailing.  The roads that the race was on were closed to traffic and there were lots of volunteers stationed to make sure that the out and the back runners kept to their respective sides of the road so that we got to cheer each other on instead of crashing into each other.  Mentally it was a bit tough at the 5k/10k split to see the 5k finish line and to keep on running but that's life.

So look, as far as performance goes, this was neither good nor bad.  I've been hovering around an 11 minute pace in 10ks recently so yes this was slower but not so much so that I'm going to let it bug me.  The first half mile or so was exactly the reverse of the start of the Big City Marathon course, and I had the oddest feeling that we were running the wrong way at the start.  On the plus side, there was a long continuous uphill in mile 5 that would have been my kryptonite just a few months earlier but I blasted up that sucker like it was no big deal.

I'm on the fence whether I'll run this race again.  It is pretty far away from home and early December weather is a crapshoot.  But the course is great, a nice combination of Big City and residential areas, the race was well organized, and the people watching was to die for (so many costumes), so I might be back.  I believe that anyone who calls themselves a runner and lives in my area should run this race at least once.

Swag recap: I will wear the shirt to death this holiday season, and the medal is hanging next to our Christmas stockings.  And the most random thing ever, the swag bag included...a light bulb.  I am scratching my head to make the connection to the race, but hey I will always take practical swag.

Sunday: off but bouncing off the walls for my next run.

Next up: two weeks with no races!
Posted by Birchwood Pie at 3:43 PM