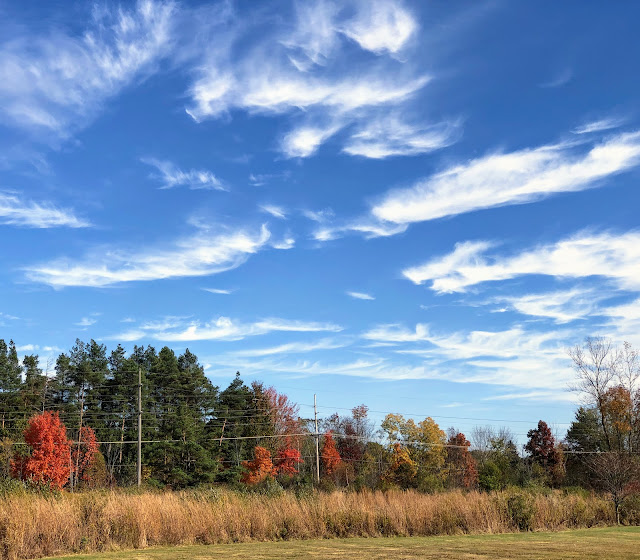 This week was the aftermath of my fall half marathon spree.  13.5 miles of recovery ensued.

First off, I want to give a shoutout to an IRL running friend who ran her first full yesterday...virtually.   Full marathoners have all of my respect but full VIRTUAL marathoners are a special kind of beast above that.  Congrats to L!

Second off, on the topic of when to start running again after a half, my personal experience is "when I feel like it".  When I was getting ready for my first half, I dutifully tore into Hanson's Half Marathon and while I don't see Hanson's as ever being part of my training plan, the one part that made a lot of sense to me was the recommendation of taking a full week off running after the race.  Actually when I first started running I took a week off every month, so it seemed like a good "full circle" approach.

The reality that I've found though is that 3 full days without running is my max.  Once I start running after a half, I can tell that things aren't quite right yet, so I just do shorter runs until my body tells me that it wants more.

Monday: For context, I could barely walk after Sunday's race but 24 hours later I felt great with no trace of soreness anywhere.  So did I want to get up and out there?  Coming from someone who is always up and out there?  NO.  There was no way, no how mentally or physically that I would have entertained the idea of running.

Tuesday: dude, you could not have paid me to run

Thursday: dipped my toe in the water with 3.25

Friday: I fired off a Fartlek (week 3 of 4 of this series). 15 minutes warm up and cool down, then 5 x 2 minutes @ 5k with a minute recover.  I got it a bit wrong though, I thought the workout was supposed to be at "faster than 5k" pace, so my first interval was right on the money and then I managed to negative split all of the repeats after that.  And I want to say that it just feels so good to run in the 5k zone, even when it's for 10 minutes total.

I've been very strict about doing the Fartlek workouts based on time and not distance, and I held true to that...and laughed after I pressed stop and saw a big ol' 3.99 as the total workout distance.

Saturday: I mean is it even Saturday if you don't run?  But I could not for the life of me get myself to go out there so I didn't.