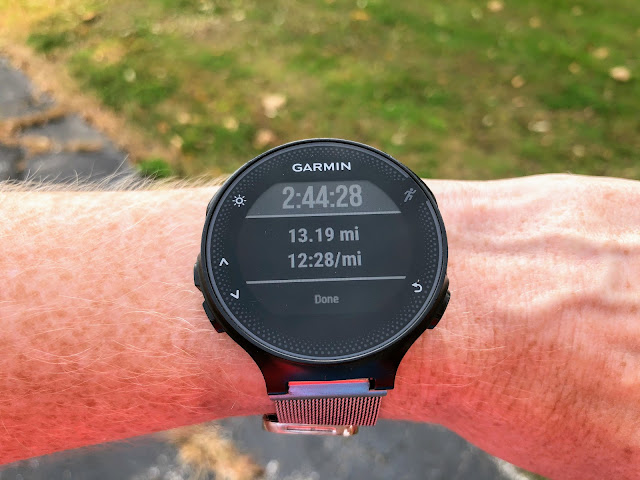 Alright my friends, since we last talked:Sit back and let me tell you all about it!

Monday: I'm so serious about #nevermissamonday...that I did Monday's workout last Sunday!  Lol, after 5 straight days of running I totally took a rest day.

Wednesday: Fartlek day!  This was the 2nd of 4 workouts mentioned in this article from McMillan Running.  A 50 minute run with 15 minutes warmup/cool down, 4 x 3 minutes at faster than 10k pace/2 minutes recover for 4.35 miles total.

Saturday: an incredibly boring rest day.  All I wanted to do was get out there and tear into my race.

The backstory here is that this race was originally supposed to be the first weekend in April.  When the pandemic hit, the race gave us the option of deferring to their October race.  I took them up on that, knowing full well that there was no way, no how that an in person race would take place.  My goal race of this fall was a virtual half the last weekend in September and I hoped that the virtual window for this race would be long enough to recover and train up for 13.1 again.

I really, really didn't believe that the in person event was going to happen, I've been though more than one "this race is a go!!!" followed by an "abundance of caution" email cycles this year.  I decided to stick to plan A and ran the virtual half in September as planned, and then if this race happened, so be it.  I'd already had the privilege of running one real, live race in 2020 pre-pandemic and never thought in a million years that a 2nd live 2020 race would be in the cards.

Since I'd classified this one as "never gonna happen" sure enough, it happened.  Our major cities aren't holding any large events, but this race is out in the boondocks, small, and had the blessing of the local authorities and health department.  As previously discussed, running 13.1 is not an easy feat for me and running two 13.1's in two weeks was uncharted territory...the only way to find out what it would be like was to do it.

The rules of engagement were: masks are to be worn when not running, no start line ceremony, staggered start, and at the finish line "pick up your medal and bottle of water and then get the heck out of Dodge".

Weather wise, it was a little warmer than I would have liked but nothing too bad.  There was no bag drop due to safety restrictions, so "tank top and shorts" weather made that situation easier.  In my flipbelt I carried my phone, 3 packs of Gu, and my running water bottle.  I wore a neck gaiter so that I could mask up as needed.  For pre-race support I carried a throw away plastic bag with a bottle of water, a bottle of UCAN/Nuun, and gloves for the portapotty (safety wise, the portapotty was my only area of concern since I knew that I would be making multiple visits before the race).

I found my way to the start line, which was: a start line, two race volunteers, a row of portapotties, and about 10 other runners.  I took care of my pre-race rituals: pinning my bib to my shirt and hitting up the portapotty.  (Fun fact: my last portapotty visit was 11 months ago!  I've run other races but they had indoor facilities...or in the case of February's 5k it was a park with facilities that were one level above portapotties).  I mean, I firmly believe that if you run at all or ever have that you're a "real runner", but if it's been over a year since you last used a portapotty, hmm...maybe your "runner's card" is in question.

The closer we got to starting time the more people showed up.  The common theme of conversation was that almost everyone had deferred from April's race and no one expected this race to happen, so no one had really trained.

And then it was go time.  Everyone had been assigned a start time (about 20 people every 3 minutes).  X's were marked on the ground and everyone in the pack stood on an X.  If an X was open, runners from the next starting batch could fill in.  So I was able to start in the 2nd wave of runners and just like that we were off.

Ah a real race...with other runners that I could use to pace myself.  I settled in behind a pack of three women who were going just over an 11 minute pace and settled into my groove.  That worked well for the first mile but they stopped at the first water station so I passed them.  There was a water station every mile (an out and back course so that's how six water stations = a water stop every mile).  The cups had been set out in advance and gloved volunteers replenished the supply as needed.  There was no close contact when picking up the cups.

There were two steep inclines in mile 3 that I outright walked (though you better believe I made up for it on the downhills) and then it was a straight shot out and back.  I had my first Gu at mile 4 and felt pretty good until mile 6.  That was when my body spoke up and said "hey, I'm not down with the two halfs in two weeks thing".

Once I hit the turnaround I started doing 4:1 run-walk which gave me another good mile, but that was kind of the end of the road for me.  I'd settled into a pack with two other runners and we kept lapping each other.  I passed them both yet again and as I went by I said "see you soon!"  but they never caught up to me again, and it wasn't because I got faster.  The girl ended up finishing a few minutes after I did but I never saw the guy again.

I still could have PR'd at that point, but my head wasn't in the game.  The last part of the race became a lot more walk than run.  I had my 2nd Gu at mile 9 which helped a little bit.  And then it was over.  And my body was trashed.  Running 13.1 was easy, the walk back to the car was excruciating.  Seriously, my body has never been in worse shape after a race.

So...grand summary.  The protocol at this race was similar to what I've read about in other recent races, and it felt safe.  It will be a long time before I take another shot at 13.1 and and even longer to never before I run two 13.1's in a two week period.  But with all of that I'm very happy that I got to do this race.